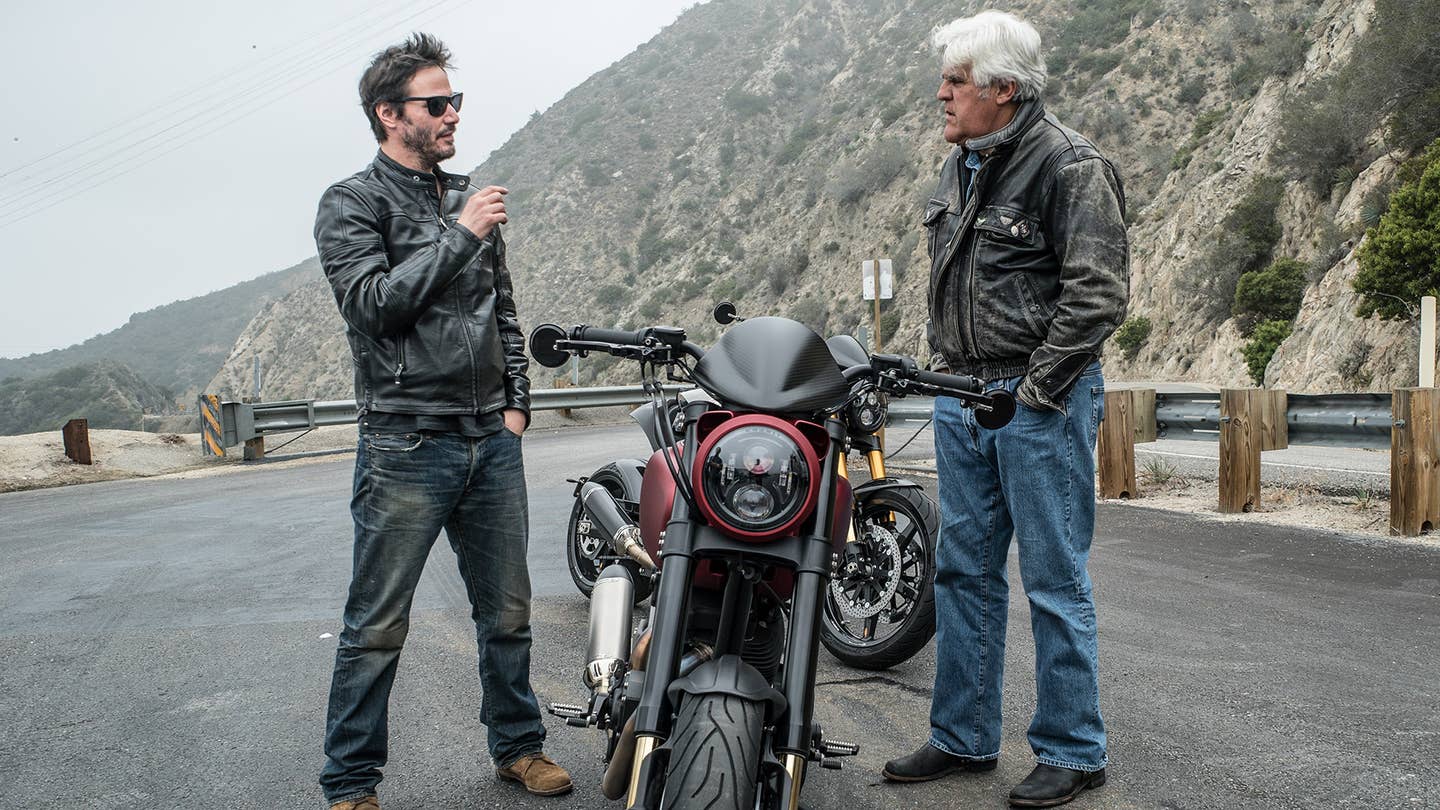 Last night’s CNBC episode, dubbed “Design of the Times,” follows the beloved living, breathing bolt of denim that is Jay Leno as he trips down memory lane to revisit manufacturers, engines and models that started various revolutions. Plus, Neo from The Matrix sings. Our favorite revelations:

7. Leno's 1955 Egli-Vincent Black Shadow is a twice-tuned dream. It’s far beyond the stock Black Shadow from whence it came, though that probably would’ve been just fine. Vincent perfected the Series A, with that glorious V-twin, which became the legendary Black Shadow. That was not only the fastest motorcycle of the time, it held the speed record for a bike (125 mph) for 25 years. This model was given a once-through by tuning legend Egli before being tendered to French tuning specialist Patrick Godet, who modernized it, adding a five-speed, electric start and more. Those drum brakes on the front mean you won’t stop as fast, Leno quips, but you’ll look good doing it. Truth.

6 - You will actually want one of Keanu Reeves’ custom motorcycles. The actor’s enthusiasm for two-wheeled glory propelled him to start Arch Motorcycle Company, with partner Gard Hollinger, who built a one-off for Reeves a half-decade back. Reeves was so impressed with the unique design and efficient engineering, he wanted to share it with the world. The aim is to birth 150 bikes over the coming three years, and their signature model, the KRGT-1 is a fully bespoke machine that starts with a sticker of $78,000. With plenty of open engine space, beautiful lines, these look fantastic. That the seat is contoured specifically to your hindquarters and wedding vegetables is a bonus.

5 - Reeves is a simple man. When Leno inquires as to the impetus behind the company’s name, Reeves’ responds sounds like one of his less-dimensional characters: “I just like the shape of an arch. And what isan arch? It’s strong and protective and it’s part of a bridge.” Thanks, Keanu. When Leno notes it’s probably better than having people say they’re riding a Keanu, we’re treated to a chyron informing us Keanu is Hawaiian for “cool breeze over the mountains.” Thanks, CNBC.

4 - The KRGT-1 has insane torque. After Leno remarks that the factory where the Arch bikes are painstakingly machined and assembled is supremely quiet, Reeves likens it to a church and breaks us off his rendition of an choral ditty. We quickly move from that unpleasant sound to the gratifying tune of the S&S-powered 124ci Twin Cam V-twin motor (a Harley clone) on two KRGT-1s that Leno and Reeves are pushing around the Angeles Crest Highway. The 2,032cc sport-cruisers sound sublime and Leno remarks that there’s so much torque on his bike, he was running out revs a bit coming out of the corners.

3 - The 1938 Tatra T87 helped kill Nazis. Seriously. This tri head-lamped, swooping beauty was built to be as sleek as a teardrop, so it wouldn’t use as much fuel. Sure, some look at it as a monstrosity, but others appreciate all the bold lines, the trafficators and the central tail fin. All can get behind it’s (unintentional) efforts to eradicate the upper echelon of the SS party.

Made in Czechoslovakia by an Austrian immigrant named Hans Ledwinka, when the Nazis overtook the Czech region, they were so taken with the car, they seized all of them. It was so aerodynamic, people never realized how fast they were going until it was too late. As a result, in the first week of occupation, seven Nazi top commanders died after crashing the Tatra. Want proof that Ledwinka’s design was so perfect 77 years ago? The Tatra has a .36 coefficient of drag. By comparison, the 2015 Corvette Z06 has a Cd of .37.

2 - A 1968 Toyota 2000GT is a remarkable investment. Our favorite bowtied appraiser, Donald Osborne, brings us a 1947 Cisitalia 202 GT, a 1956 Continental Mark II and the 2000GT. The stunning Cisitalia, essentially a reformatted, single carbureted Fiat 1100, has risen 60% in value over the past five years, while the ‘56 Continental, which, at $10,450 brand new cost more than some houses, saw a 185% appreciation. Blowing both out of the water is the magnificent Japanese sports car. Five years ago, it was trading for $300K. Now you can’t find one for less than $1.5 million.

1 - Toyota transformed one 2000GT into a convertible for Sean Connery. It wasn’t by choice or ridiculous demands. When it came time for the 6’3” James Bond actor to squeeze into the tiny coupe while filmingYou Only Live Twice in Japan, he couldn’t physically fit. So Toyota clipped the roof and made it a drop top. Look at the film today and you’ll notice that Connery’s head peeks out above the windscreen.