It’s the only Ford Festiva you’ll ever covet. 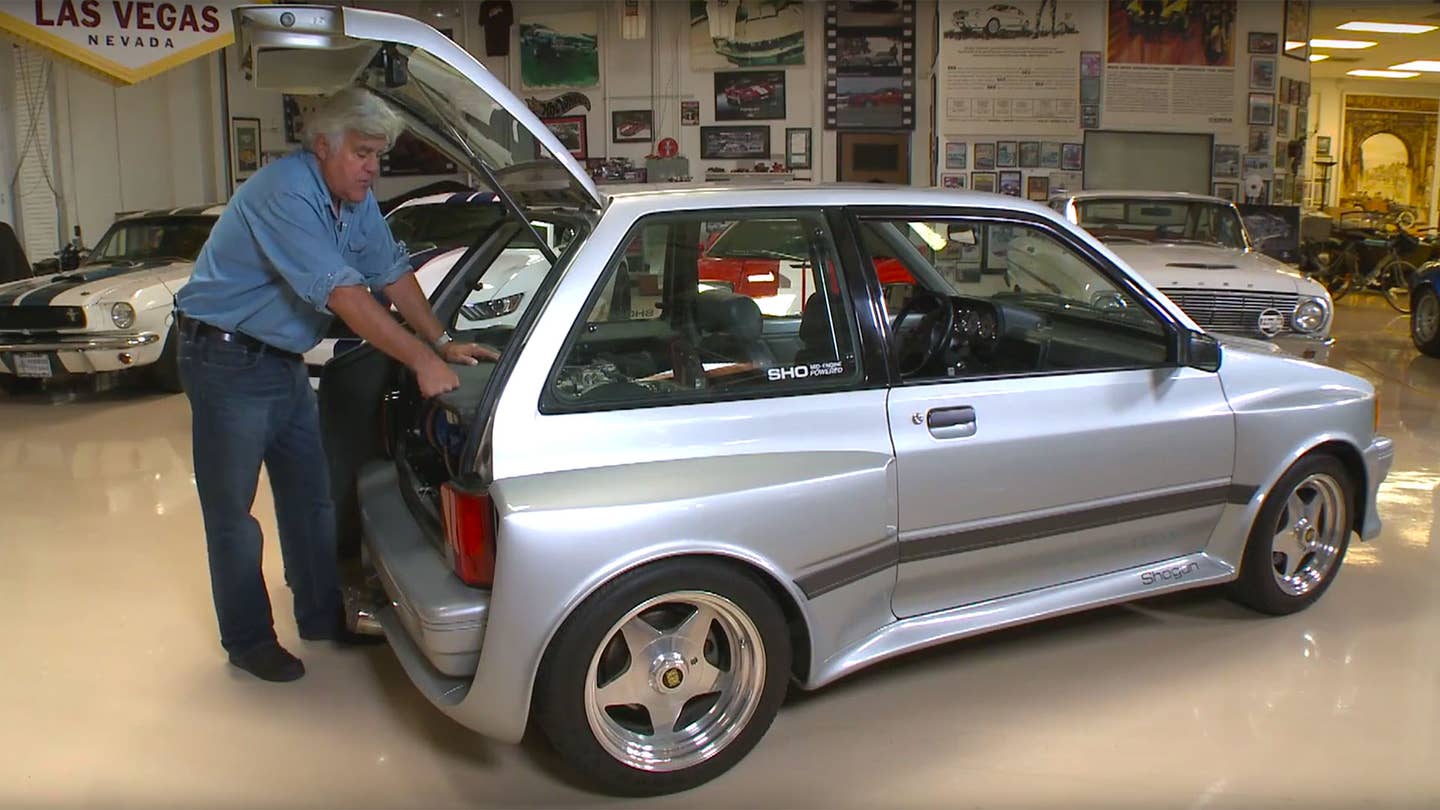 The Ford Festiva is not a fast car. It’s barely a car at all. The 1989 model featured a paltry 1.3-litre I4, good for a dismal 58 horsepower. The trudge to 60 took just shy of a month; this front wheel drive lump is no kind of hot hatch. Then, Chuck Beck and Rick Titus stepped up and transformed that brick into a rocket with an SHO engine swap. Seven were built, which means Jay Leno had to buy one, and this week, he dives into his 27-year-old fat-bottomed Blue Oval.

Beck, a pedigreed Ford GT40 Le Mans pit member and the man who successfully implanted a Lamborghini V12 into a motorcycle, and Titus, an erstwhile racing driver and host of Driver’s Talk Radio, had the brilliant idea to grab the 3.0-litre Yamaha-engineered V6 from the Taurus SHO (Super High Output) and wedge it in the back of the Festiva, reconfigure it to a rear-wheel drive and made the Ford Shogun, one of the quicker cars to emerge from the late Eighties. It shuffled to 60 in five seconds, slow by today’s standards, lightening for the time. Leno notes the most powerful American production vehicle of the era was the Chevy Corvette, clocking in around 350 hp. But he posits that the Shogun, with the low curb weight of 2,190 pounds and that 220 horsepower engine, had one of the best power-to-weight ratios. Leno added a nitrous tank, which gives it another 90 or so ponies.

The comic calls it a sleeper, though that’s a bit of a stretch, given the aggressive body kit and those rear fender air intakes. Also a tough sell: the sticker price. It went for $42,000, though Leno picked it up for around $35,000. (Base price for a L-Plus Festiva: $6,800.) Adjust for inflation and that’s about $82,000 in today’s greenbacks. If you had that kind of scratch to frivolously blow, you’d probably opt for a Porsche 911, Leno says, though the Shogun was faster than the Porsche. “Ken Block would have a great time in this car,” the comic muses. True.

Leno’s done little work over the past three decades, not that the car needed much. Just a few new batteries and nitrous refills. On the road, it sounds like an angry buzzard as Leno zips around the California highways and side roads. The front surges up every time Leno mats it, and the comic spends most of the drive reiterating everything he’s already said in the beginning of the video. It handles well for a car with such a short wheelbase, though it needs some new shoes. Leno closes with a loud yet short burnout—you can tell this Shogun is a literal ton of squirmy, squealing fun to drive.