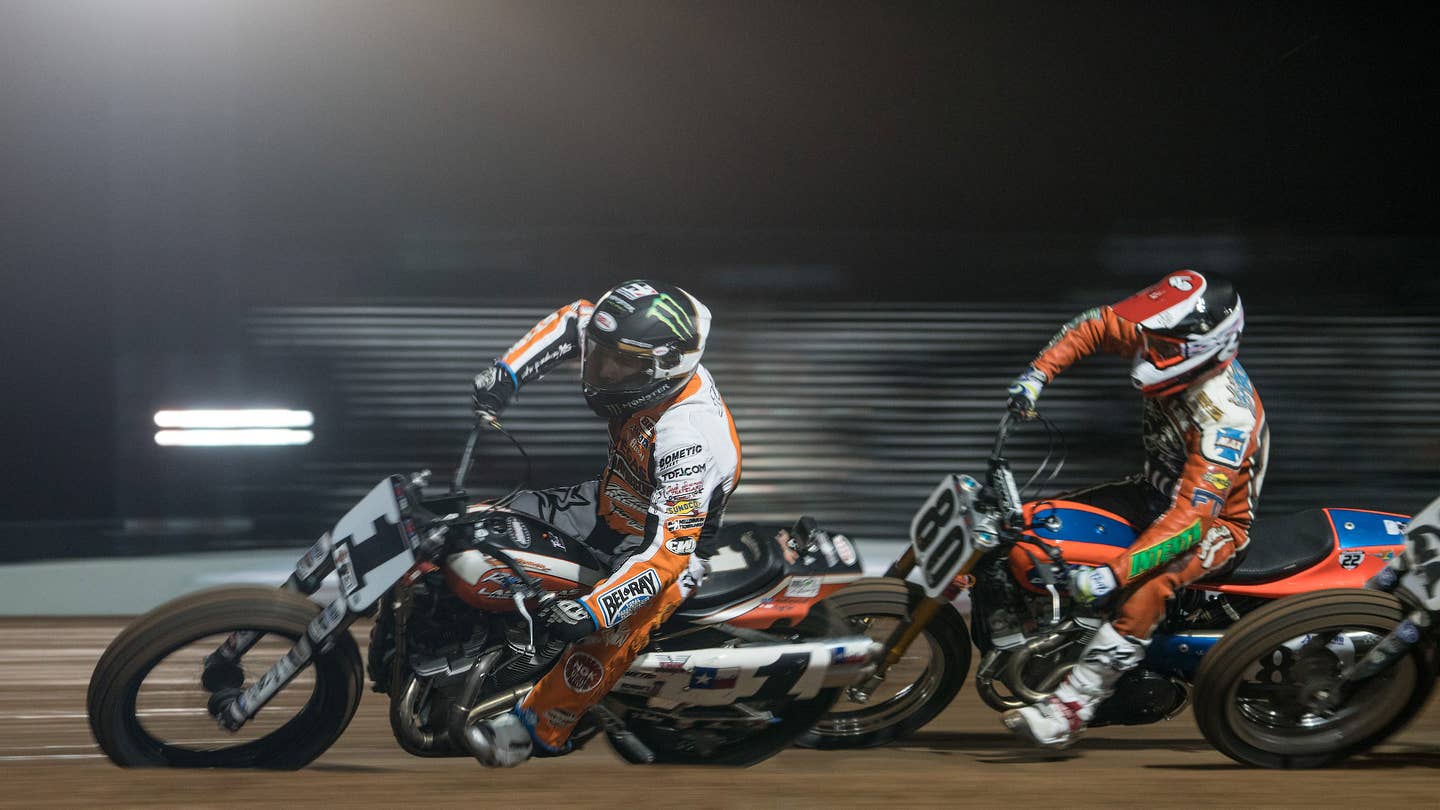 I spent my last night in Austin a long way from the overflowing bars and restaurants of downtown. Left wife and kid at a friend’s place and drove the truck to a dusty field within eyeshot of America’s only F1 circuit. There’s something special there, less than a mile from the engineered asphalt of the Circuit of the Americas: a lonely, half-mile dirt oval. A flat ring of packed clay with nothing for runoff but grass or hay bales or plywood over a chain-link fence. This is the home of AMA Pro Flat Track.

It’s the last spectacle in American racing. Has to be. It’s a barely orchestrated brawl, the best bent parts of rodeo and rugby. As if a world’s worth of warring nations came together and said: “All right, boys, there’s only one way to settle this: motorcycles.”

The riders stack up at the line. If there’s a hierarchy there, it’s written in a language I can’t read. They seem to know where they’re supposed to be. The guys in the back wrap their throttles and let their back tires spin, testing the surface, praying for a hole-shot miracle. One guy finds the sweet spot; the bike hooks up, stands on its end, and dumps him on his feet. They dance there for a second, spinning on the front straight before the assembled crowd. The bike tires of the twirling and falls on its side—this, remember, in national-level event. It would be like Lewis Hamilton stuffing his W07 on the way to the grid.

And that’s the miracle of it. The variables are innumerable. The track changes constantly, from race to race, lap to lap. What was the sweet spot 30 seconds ago might put you on your ass 10 seconds later. And it’s hell on a machine. Pocked and rutted, like ripping down a cornfield. There are mechanical failures on the best-prepped bikes, not to mention start-and-stalls, slipped chains, dustups with other riders. You’ve got a better chance of guessing the number of snowflakes in Nome than predicting who’s going to cross the line first.

The grid is a chorus of fat hornets. The staging lights pique their crescendo, and when the green glows the lot of them drop their clutches in a pandemonium of wheelies and fishtails. Great roosts of clay shoot for low orbit. The noise falls for a second as the bikes fight to twist internal combustion into forward momentum, then it surges again.

The field is elbow-to-fender, knee-to-wheel in a riotous ode to calamity. The first corner happens quick: the riders chop the throttle and stand on the rear brake, hips forward on the tank, core slouched, inside foot down and skidding off the clay, outside elbow up and in line with the handlebars. It’s almost silent. Every last one of those damn bikes at an impossible angle, skidding sideways with the rear tire in a mad rush to pass the front, dragging the inside peg in a big "fuck you" to physics and every last thing you know about how motorcycles should work.

The Texas wind lights up with clay, infused with the sweet smell of spent race fuel as they stand the bikes up and gap the throttle for the next turn. The whole insanity happens again. The fast guys out front are smooth, predictable. They hit the same line every lap and make time out of it. Everyone else is a certain shade of fucked. The bikes are all on top of each other, and the guys who get pushed to the loose and rutted dirt on the outside wind up in wild, whip-crack tank slappers. I have never seen a thing so desperate to have a man off its back.

Impossibly, they hang on, except when they don’t. The pack’s so tight the bastards can’t help but run each other down, a pile of bikes and limbs bouncing off the dirt at race speed. Plastics and pipes and handlebars scatter in glorious yard sales. Almost everyone bounces up quick enough to get gone before the pack swings around again, red flag or no.

I watch one guy get his front wheel tangled up in the rear tire of the rider ahead of him, go down hard in the thick of it, and get run over a few times. When the pieces stop flying, he’s on the clay with his bike on top of him. The marshalls scooter over and get the machine vertical. He limps up, throws a leg over his bike, kicks it to life, and proceeds to tear an 11-o’clock wheelie down the back straight to catch up to a stopped pack. From road kill back to hooligan in under a minute.

The classes qualify, then run their main heats. You feel it in the soles of your feet, the riot pop of the big singles and the ragged, dead-blow hammer of the bigger twins vibrating through the dust. When it’s over there’s tire smoke and pyrotechnics, fireworks and a victory speech that includes shout-outs to major sponsors, like a jewelry store and a Harley dealer. All of it playing out under a wicked sliver of an orange Texas moon.