How to Initiate a Car Guy Into the Motorcycle World

Or, how I became a superbike racer's human backpack. 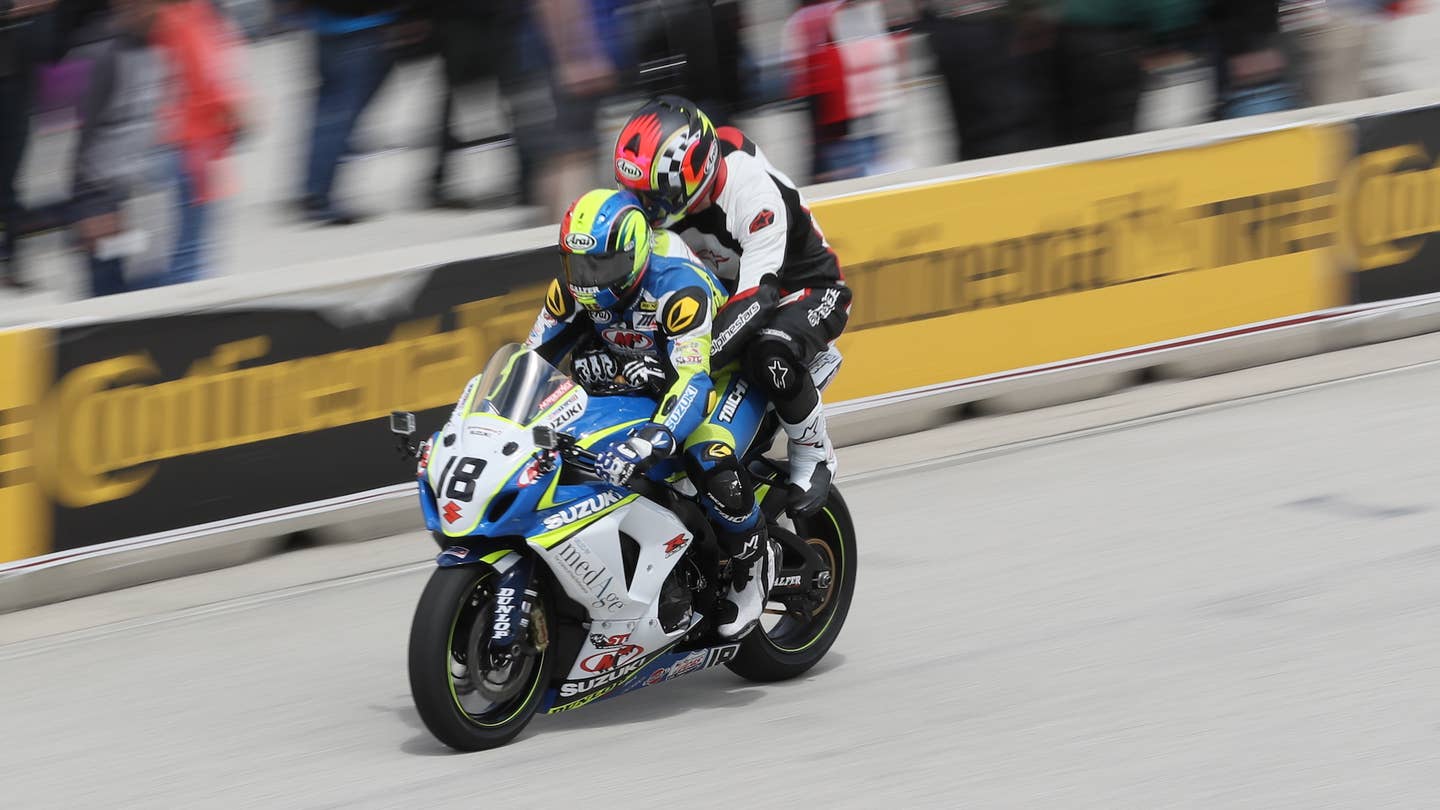 During high school, I had a friend named Pete. He worked on boats. After senior year, Pete became a railroad tramp. He’d follow lumber from the Pacific Northwest, living in boxcars and hobo camps, stopping off at dockyards when the wood was unloaded, looking for jobs. Pete, as you can imagine, led a fascinating life. I respected what he did. Admired it. Loved hearing about it. Pete swore by the rails, but did not invite me to ride with him. I did not ask.

This, fundamentally, is my relationship to motorcycles. Neat things, relevant to my interests, part of another world. They don’t invite, I don’t ask. The Drive’s West Coast editor, Chris Cantle, loves motorcycles almost as much as Pete loves trains. Except Cantle is not content with my passing admiration. So, as an initiation of sorts, he sent me to New Jersey Motorsport Park for laps on a two-seat superbike. Moto guys get a laugh; car guys get perspective; I go for a ride, ideally while upright.

Fact: I’ve never been on anything with two wheels and an engine.

Fact: The last time I saw Pete was at a benefit concert. Like motorcycles, locomotives are unforgiving. Four bands played. We almost raised enough money for his new prosthetic legs.

If you’re looking for a primer in professional motorcycling, MotoAmerica AMA Superbikes is a fine place to start. After years languishing under a stock car racing ownership regime, the series is under new management, healthy as it’s been since before the recession. The race in Jersey, the season finale, had a carnival atmosphere. RVs, campsites, merch tents, kids zipping around on pocket-bikes, bigger kids out hucking four-strokes around the 2.35-mile Thunderbolt circuit. Promoters are pushing this as a support-and-feeder series for the premier international acts, like MotoGP. When World Superbike rider Sylvain Guintoli went down earlier this year, Yamaha called on defending MotoAmerica champion Cameron Beaubier to fill in. And that, according to Chris Ulrich, is a big deal.

He would know. Ulrich, 37, spent nearly two decades on the pro circuit, grabbing national podiums finishes for Honda and Suzuki. His dad founded Team Hammer, in 1980, and edits Roadracing World Magazine. Now semiretired, the younger Ulrich keeps busy mentoring the team, promoting MotoAmerica and raising money for charity, primarily by selling rides on a custom two-seat superbike. He wants me to like motorcycles, because he wants everybody to like motorcycles. The local pool guy wants everybody to swim; the used bookstore owner thinks you should read more. That’s how family businesses work.

Nuts and bolts: Ulrich’s two-up is a replica of the AMA GSX-R 1000 race bike. Stock frame and swingarm, reflashed engine software, aftermarket exhaust and fork cartridge, custom Ohlins rear shock, series-spec Dunlop slicks. Wet weight is roughly 390 pounds, output in the neighborhood of 205 horsepower. There’s a flimsy second seat pad on the tail fairing, an extra set of footpegs, and a grab bar on the tank. Those are for me.

Here, a few things worth noting. First, if you’ve never ridden a motorcycle before, pulling on full race leathers feels so stupid, so singularly disingenuous, it actually hurts a little. There is no way not to be that asshole, poseur ultimate. But it hurts a lot more if you fall without gear, and falling is common for a different breed of asshole. The interloping doofus breed. My breed.

Also, I am not a small animal. Long legs, big hoofs, huge ribcage. It’s ideal for pickup basketball and exit row seating; less so when playing backpack for Chris Ulrich. He’s three inches shorter than I am, and maybe 25 pounds lighter, which makes us a goofy pair. Or, rather, it would make us a goofy pair—Ulrich’s got a bum shoulder, so his old rider coach, Ken Hill, is here substituting. And Hill is one size smaller than Ulrich. Backpack? Parachute.

We climb on. Hill gracefully, then me, not at all. I’m that baby gazelle figuring out its limbs, wobbly and dumb, managing to kick in the secondary footpeg clambering onboard. I didn’t even realize it was collapsible. Somebody on the pit wall sees this, and charitably knocks the peg back into position before we go out. He is now my best friend.

Right. First lap. The speed is… unquantifiable. Not in distance or time, or any averaging thereof. Not in the fear it drags up, either. If you’re on a liter-bike, even as a passenger, Eros lost out to Thanatos a long time ago. Consequences are consequences. Any machine worth a damn won’t hesitate to remind you that belts aren’t just for keeping the pants up.

Besides, saying it’s fast is lazy. You’re prepared for that. It doesn’t take more than a passing glance at power-to-weight and an active imagination to put yourself there. For a car guy, on raw acceleration and braking, it’s what you’d extrapolate from the the world’s most hateful Caterham, only ten times as dire, and a hundred times more intimate.

What’s beyond imagination, the part totally and completely foreign to somebody in the car world, is how physical that speed feels. What it demands of you. Without the reins and buggy, the horse is a whole lot meaner. It’s unconcerned with wind and heat and noise, the chain-gang of abuse pounding away at whoever’s along for the ride. After three turns, you’re keenly aware of every evolutionary oversight, all the human body’s mushy spots and fundamental flaws. Mixing those massive g-loads, and acceleration and braking forces, with a tilting axis plays tricks on your equilibrium. Sometimes, it’s difficult to breathe.

Just riding along, nothing more than a ballast with a heartbeat, is suitably violent. Being an active participant must be hell. Or maybe better? By the second lap, our fast lap, it’s taking a toll. So I’m sweating, and sliding around on the seat, side to side through the esses, and involuntarily climbing up Hill’s back, doing ragdoll jujitsu into the braking zones. Then there’s the turbulence. Suzuki designed this windscreen for one person; I’m higher up, and too broad for the rider’s slipstream anyway. Depending on the corner, and the lean, the air pressure is peeling back my shoulders, or trying to lift my helmet off at 140 mph. If Arai didn't make a Pez dispenser before, they do now.

Coasting back into the pits, I can’t decide if our laps lasted 20 seconds or three hours. Ulrich says they were about two minutes apiece. Forty-five seconds off the pro’s pace. Context is everything. Our two-up ride is basically Carl Lewis strolling to his mailbox.

Of course, for anybody who rides sportbikes, this is mostly familiar. (Hill, also a driver coach, says throwing a proficient street rider on the race-spec GSX-R is roughly equivalent to trading a Mustang GT for a Z06 Corvette on slicks; the same fundamental sensations, only harder and faster, and more capable in the right hands.) For somebody who’s never been on anything faster than a ten-speed Schwinn? Like having never heard music, then being lowered into an elevator shaft lined with Marshall half-stacks, where Pantera is played into your face at full volume. Maybe you don’t end up a heavy metal fan, but intrinsically, something’s there. It’s undeniable. Mostly, it makes you start asking questions.

And more questions, better questions, is always appealing. So is the idea of getting back exactly what you put in, a direct correlation, because that’s the most egregious failing of modern cars. Plenty of people climb on motorcycles looking for cheap speed. That’s still beyond me. Sure, the outright pace of a liter-bike is incredible; like a fast car, it’s probably a red herring for what’s actually pushing your buttons. But being inside your own skull, taking some punishment, straddling the line between idiot and astronaut? I could get behind that.

Before leaving the track, Hill introduced me to Keith Culver, who runs Yamaha Champions Riding School in Arizona. He invited me to come out this winter and learn a few things. I need another dangerous, expensive, gasoline-fed habit like a hole in the head. Culver gave me a business card. He says they loan out helmets.