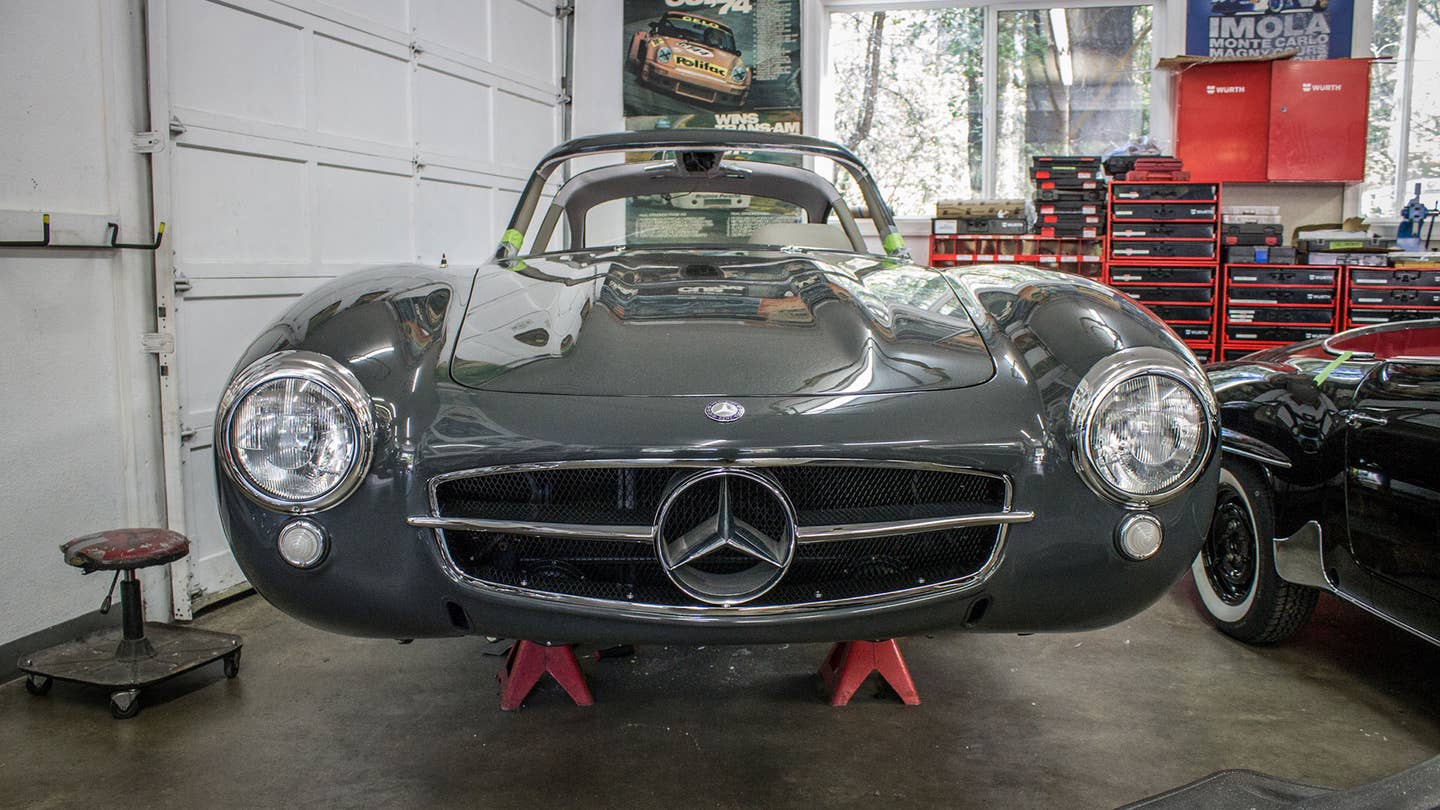 “I must have read this book a hundred times,” says Rudi Koniczek, opening a copy of The Secret of the Unicorn to the flyleaf, “It became my friend. Tintin became my friend.” Rudi's house is filled from floor to ceiling with Tintin memorabilia; his workshop is filled with 300SL Mercedes – the Gullwings.

The Saanich peninsula is fresh and green this morning in early spring. Located two ferries and a couple of hours driving North of Seattle, it's the mildest climate in Canada, and survivor cars from the 1960s and 1970s are a common sight. People retire here too, and that means a sunny day brings out the metal they always dreamed of, T-birds and GTOs and the like.

For all the nostalgia rolling around, it's an otherwise ordinary rural place, which makes Rudi's workshop that much more astounding. Along with the dozen in-progress restorations in the workshop, there's a storage location offsite with dozens of rare beasts: Jaguar D-Types sit cheek by jowl with Ferrari Daytonas, a 1960s 904GTS next to a 250GTO.

Somehow it's not the machinery you come away remembering, it's the man. Boyish but seasoned, gleeful yet deadly serious, prone to utter both the sublime and the incredibly profane in the same breath. Koniczek is the kind of character only Hergé could have dreamed up, and he's a master at bringing the Mercedes-Benz 300SL back to life. To-date, he's restored well over a hundred of them, including four of the incredibly valuable twenty-six alloy-bodied cars. He walks through the workshop like a maestro, judging leather fitted luggage and the windscreen mounts of a disassembled 190. This meets approval; that needs more wet-sanding. His in-house team of eight and a few trusted suppliers work like the flawless, well-oiled machines they are resurrecting.

Rudi loves Tintin. His company crest has the young reporter exiting a Gullwing, his Mini Cooper S has a TINTIN vanity plate. And he loves the 300SL as well, the coupe for choice. Considered the first of the modern supercars, the straight-six powered Merc's Gullwing doors are a necessity of the high-silled spaceframe beneath the skin.
The later roadsters are a bit softer, more forgiving at the limit, but both variants are million dollar machines these days. A well heeled clientele apply to have their cars restored here by Rudi and his crew; while he of course won't name names, a picture arrives in the mail of Canadian Prime Minister Justin Trudeau getting married in his father's 300SL roadster. Rudi restored the car, and was a guest at the wedding.

Born in Germany in 1949, Koniczek's family emigrated to Eastern Canada in 1953. Even in booming post-war times, having the accent of a former enemy made him a target for frequent schoolyard bullying. On a cold winter's night, waiting to take the trolley home with his mother, he found an ally. “It was sitting in the children's section, facing out, and I was immediately drawn to this,” he says, pointing out the wooden ship on the frontispiece ofSecret of the Unicorn. “I turned to my mother, knowing it was a lot of money at the time, and just said, 'Bitte, mama, bitte.'”

It would be an introduction to both adventure and artwork In the accuracy of his drawing, Hergé sought veracity. He pioneered the ligne claire style of illustration, favoring crisp illustrations of outstanding clarity and accuracy. The cars he drew Tintin driving or pursuing were all exceptionally well-researched; Traction Avants and Lancia Aurelias seem to hurtle from the page.

“Look at the motion!” Rudi exclaims, showing off one of his larger sculptures. Professor Calculus, Tintin's brilliant but hard-of-hearing friend, seems to hang in mid air, an instant of Hergé slapstick frozen in miniature.

This eye for frozen speed drew Koniczek to the flowing sheetmetal of the 300SL, first as a boy, then later as an apprentice mechanic. Soon he was the national troubleshooter for Mercedes-Benz Canada, flying in to solve puzzles and train others. Later, he branched out on his own, specializing in classic Benzes and eventually founding Rudi & Company. His restorations have won awards and accolades from Pebble Beach to Amelia Island.

And yet, even after fifty years working for Mercedes from wash bay to bespoke restoration company, Rudi is still much like his young hero. He shows me the studio where he still assembles model cars; the library of works by and about Hergé; the bathroom with a four-foot model of the rocket from Destination Moon; the garage where he keeps his Cayman R, a squadron of boxer-engined BMW motorcycles, and a new Solarbeam-yellow AMG GT-S. If there's a tendency to drop into the kind of blue language Hergé would render with asterisks, lightning bolts, and daggers, then perhaps it's just a dash of Captain Haddock in the mix.

The Adventures of Tintin have been translated into hundreds of languages (Rudi is reading one written in Scots brogue, The Derk Isle). He has appealed to millions with his simple bravery, daring, and absolute integrity. We have traveled with him, explored with him, solved mysteries along with his friends and trusty dog Snowy, brought the nefarious to justice.

Tintin's adventures taught his young readers to be adventurers in life. For Rudi Koniczek, it's a lesson taken to heart.