Disappearing down the rabbit hole—and into the driver's seat—of a rare machine that all but created the Seventies supercar. 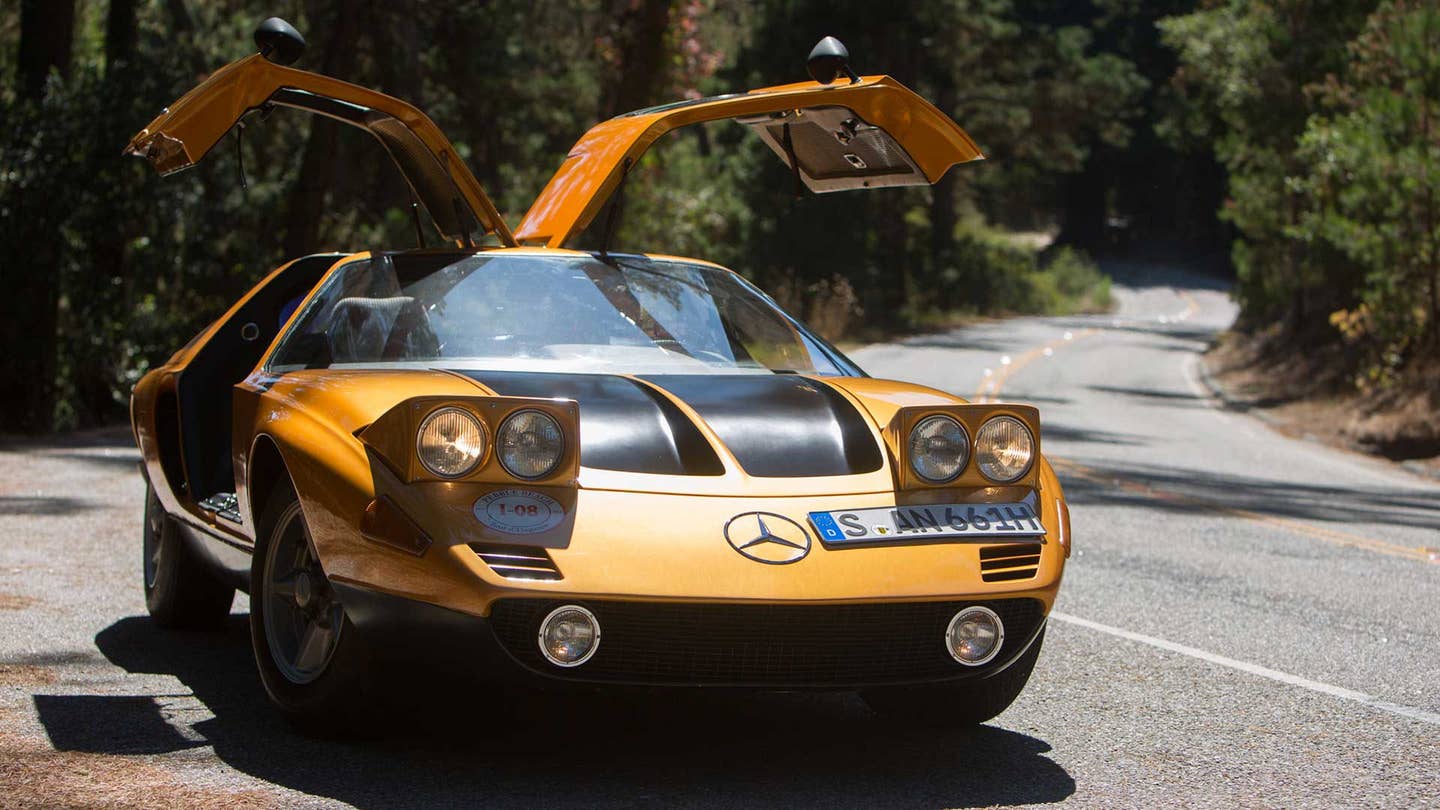 In order to begin my drive in the atomic orange 1969 Mercedes-Benz C111 concept car, a crew of workers literally had to remove the side of the building in which it was housed. This seemed fitting, as this particular vehicle, when it was first shown at the Frankfurt Motor Show, figuratively blew the walls off the convention hall—and blew the minds of the thousands of visitors who queued up to see it.

The C111 was built out of fiberglass-reinforced plastic mounted over a steel tube frame, but its lightweight construction was not nearly the most arresting thing about it. The concept was created as a test bed for experimental ideas. In an era of increasingly strict emissions and fuel economy standards, engine bays were battlegrounds. Compact, lightweight Wankel motors with three or four rotors, the first of the venerated turbocharged Mercedes diesels, and bored-out S-Class V8s were placed in the engine bay behind the cockpit. It was a scheme that led to speed records. The earliest extant versions of anti-lock braking systems (ABS) were also mounted on the discs of the C111.

But it was the shape, more than anything, that seduced. Unveiled before the Lamborghini Countach, BMW M1, Lotus Esprit and even the Lancia Stratos Zero, the C111 was one of the earliest exemplars of the outrageous “wedge” styling that would dominate the actual and conceptual supercars of the Seventies. Designed by Bruno Sacco, who dedicated his effortless genius to Benz over four decades, the car is wide, angular and impossibly low, seemingly attempting to cheat the wind by ducking under it.

“The purpose of the car was to have a sort of mule, if you will, to test out new technologies,” says Mike Kunz, director of the Mercedes-Benz Classic Center in Irvine, California, a wholly owned subsidiary of Mercedes-Benz USA dedicated to preserving the heritage of vintage Benzes. “But a very cool, sophisticated mule. Not a crude one.”

I slide in and plant myself in an uncannily familiar textured leather driver’s seat, which sits just barely to the left of the vehicle’s centerline. Also familiar are many of the other fitments. “Some things are generic in nature,” Kunz says before we roll out. “Some of the dials and so forth. The switchgear is similar to that from a late-Sixties S-Class or SL. The radio is production. The tail lamps are probably from a period truck.” 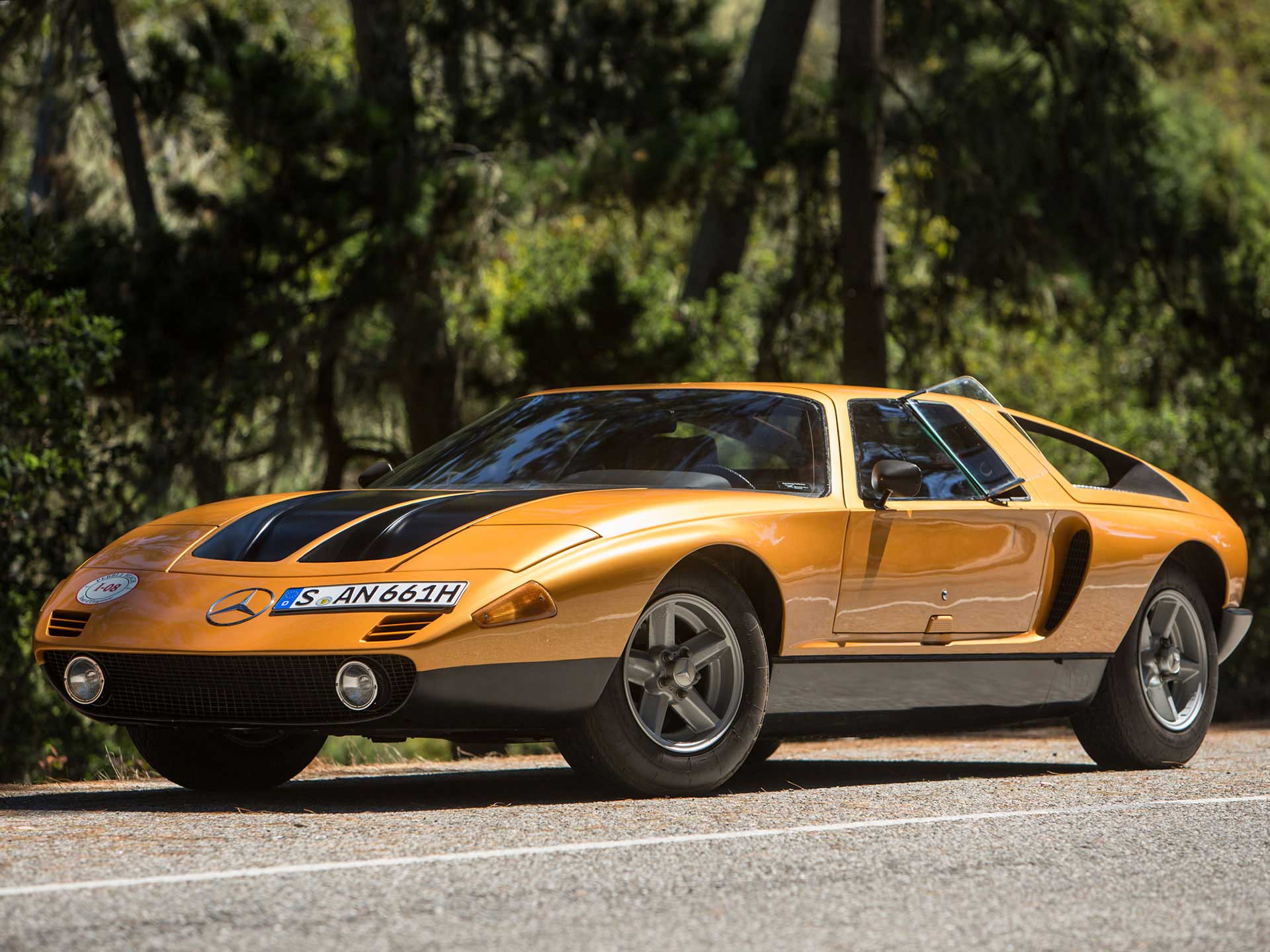 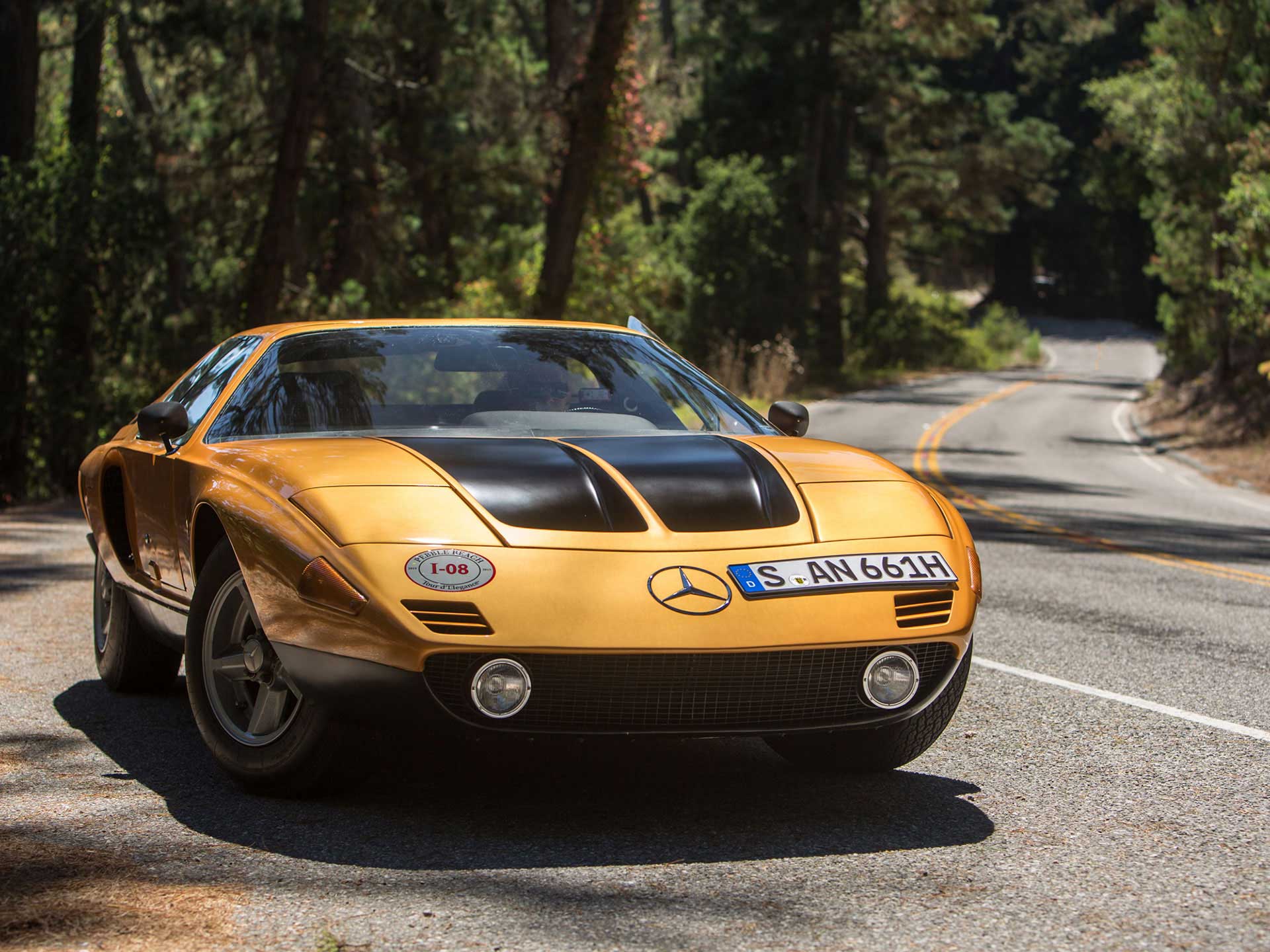 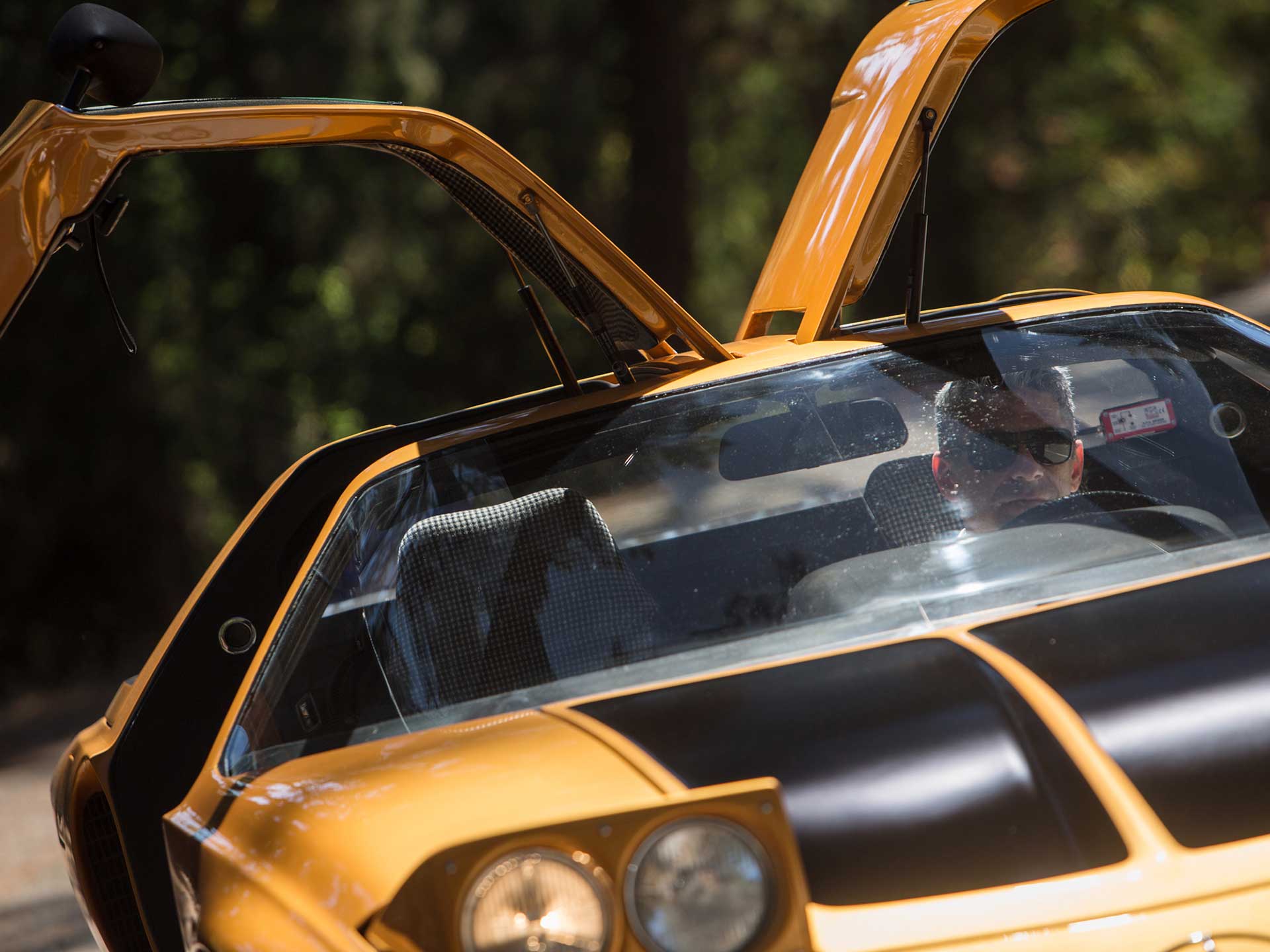 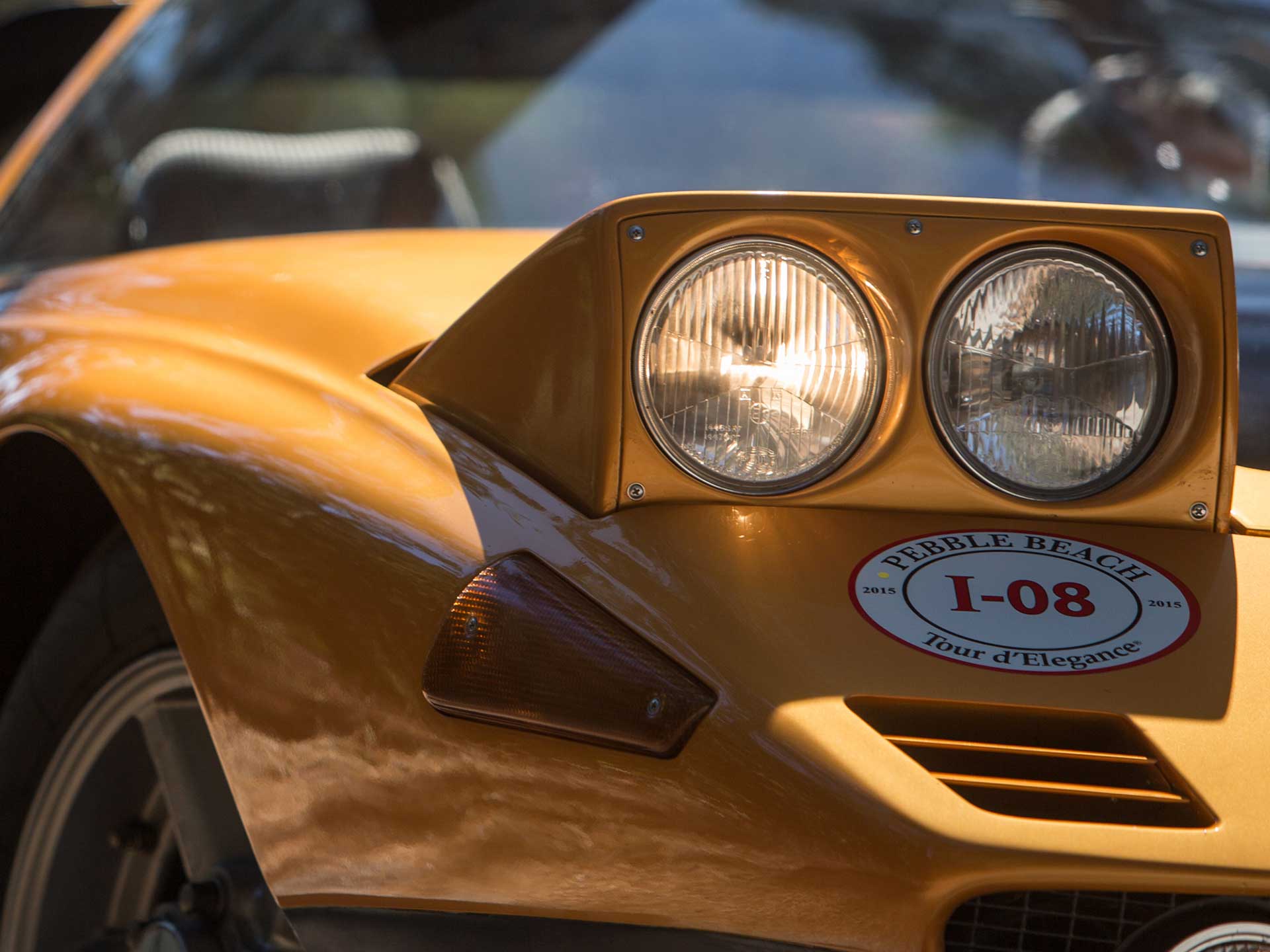 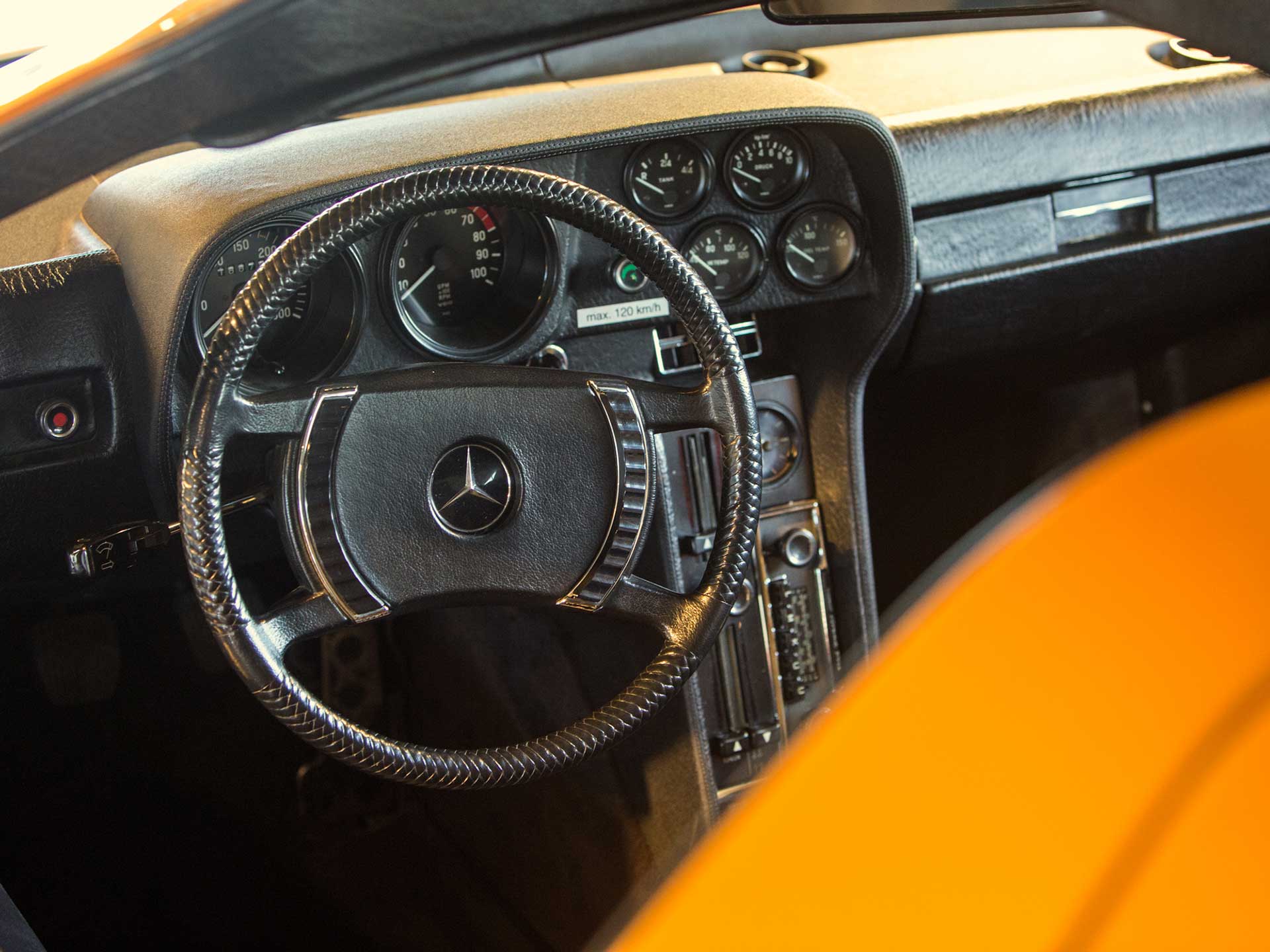 I roll off onto the green at low speed, concerned with damaging this priceless prototype—one of only 11 ever made. There is not much clutch feel, and the unassisted steering is very heavy at low speed. But everything lightens once we’re underway. The five-speed clicks precisely through its detents. The big plastic wheel communicates precisely what the front tires are touching, down to a pebble. The engine pulls with luxurious vigor. The A/C blows cold, escaping immediately through the flip-out vent window.

I once spent an afternoon in a pristine, million-dollar 1955 300SL Gullwing owned by the Mercedes-Benz Classic Center, and my experience in the C111 is not dissimilar. There are certain cars that leap out of time, evolutionary outliers to which the rules of their era do not apply.

If everything on the C111 was made of unobtanium, it would exist only as fantasy. But as with the Gullwing, its radical components combine with its quotidian ones to wrinkle the laws of the fourth dimension, of relativity. Though the turn signal works like my Uncle’s 1975 450SL roadster, and the interior smells like my childhood neighbor’s 1978 300D sedan, the tiny triangular coupe floats on a Mobius strip of time-space mindfuck. Born in 1969, just like this car, I’m driving my era’s ideal vision of the perfect future, in the actual and problematic future it inaccurately imagined. Which is my futuristic present—one in which cars drive themselves, and the computing power of the world is in my pocket.

The C111 was never a production car. “There are reports of high-end customers coming to management and offering a blank check to build the car,” Kunz says. “But they decided that this really was a test bed.”

A bed is for dreams. As I return from where I started, turn off the engine and unlatch the center-locking magnetic safety belt, I am overcome with a desire to find a black hole. If there is a parallel past-future universe where everyone drives a C111, I want to live in it, forever.