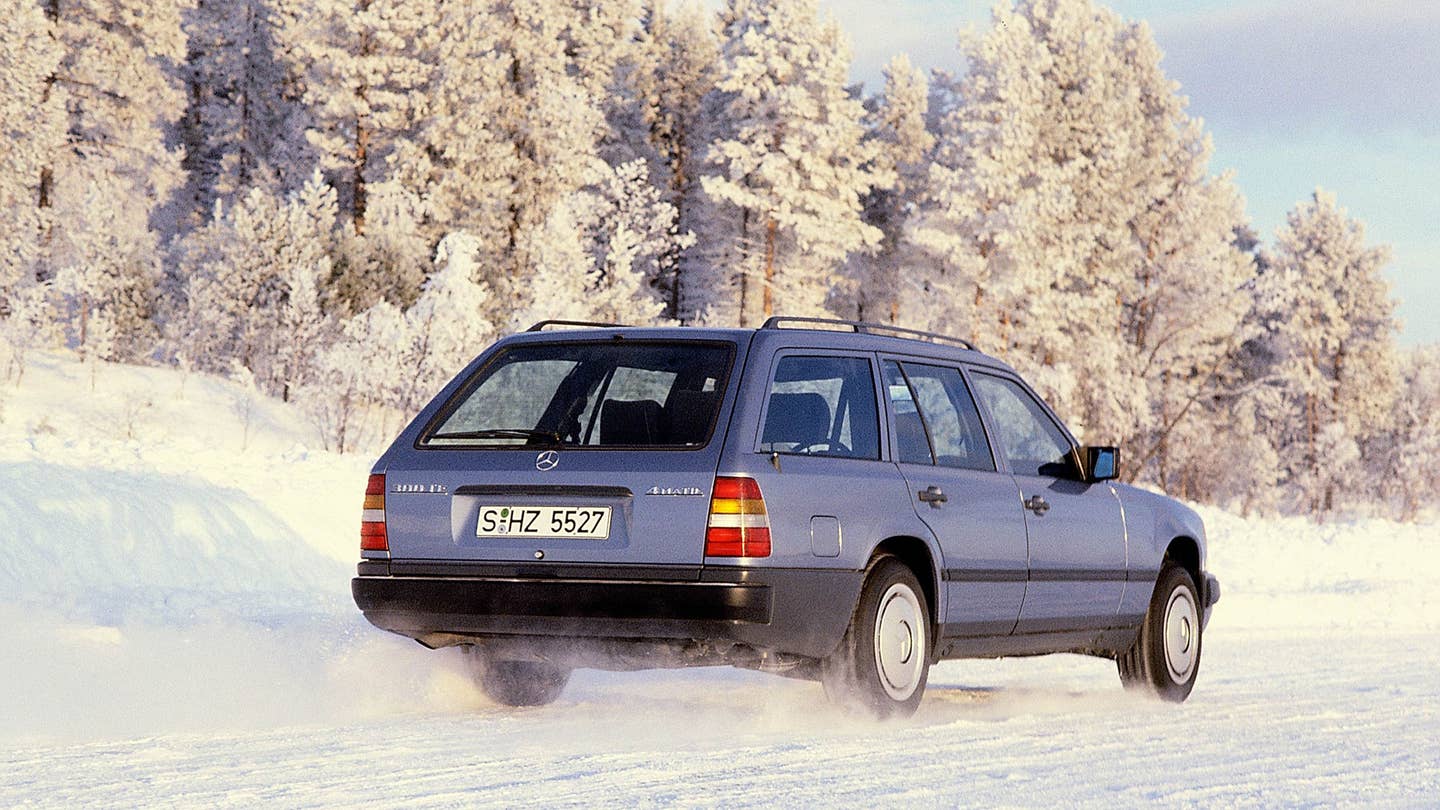 Just yesterday, a German magazine leaked photos of the 2017 Mercedes E-Class, giving 31 pristine looks at Mercedes famous mid-sized sedan. All photos look to be Mercedes-sourced, so it’s safe to say that this is exactly the car that will be competing, in a year or so, with the BMW 5-Series and Audi A6. It’s handsome. It’s a big C-Class. It’s a small S-Class. It’s an icon.

For years, the E-Class has been the world’s foremost representation of an executive car. From battered-but-hearty diesel German sedans to wafty, likely beige, W124 station wagons zooming across southern Connecticut, the E-Class is all the luxury car most people need. But why? Surely, fans of Benz’s middle child would also enjoy the pleasures of a similarly-sized BMW, or even the flawless hush offered by a comparable Lexus? While Mercedes’ product and marketing teams might offer a litany of specifications, features and design cues as answer, we’d prefer to look to the past. All the way back, in fact, to the arguable zenith, and our personal favorite, of the range: the 1986-1994 Mercedes E-Class W124.

Look at her. Proud, polished, significant, but never gaudy. Traveling swiftly across a snowy landscape, cloaked in a coat of lavender-blue. In those simple, if stylish lines, we find the reasons that the Mercedes E-Class continues to pummel its competition worldwide. The proof is in the past.

The Mercedes E-Class, like another venerable European, the Porsche 911, has rarely deviated from the sober lines that marked its origin. That artful shape—rectangular but with feeling—have defined the model since 1953 Mercedes “Ponton.” Crispness, and a gesture towards timelessness, were a must. What’s luxury if not the ability to trick your neighbors into thinking your car is newer than it is?

When it was released, the 1986 E-Class was an expensive proposition: $35,000 in the day’s dollars, or over $75,000 in 2015. For that price, though, buyers got the best-built sedan in the world. Sheetmetal was thick, paint was hearty, and structural integrity rivaled even safety-obsessed Volvo. Today, scanning Craigslist reveals dozens of cars with over 200,000 miles, and darn if they don’t look barely used. Though that quality faltered for a while in the late Nineties, Mercedes still sold cars on their reputation and today, the build standards are back.

That obsession with quality and materials carried over into the interior. The luxury the W124 E-Class offered wasn’t one of tufted velour or chrome—if fact, the look bordered on sparse. Vinyl was standard. But again, it’s possible to find wrecked, junkyard W124s with interiors that look dealer fresh, and that’s a hardiness that bespeaks real investment upfront. The recent shots of the 2017 car are definitely more luxe; fingers crossed for a similarly robust wear.

When it debuted in ‘86, the W124 had a multi-link rear axle, a trick single-arm windshield wiper and one of the lowest coefficients of drag in the biz. On the wagon, a small servomotor pulled the trunk closed in order to let the neighbors sleep during early-morning excursions. When it debuts, we’re sure the 2017 E will offer a host of electronic and radar-enabled self-driving wizardry, in addition to mechanical innovation.

Trashed in a used-car lot, full of dogs driving the eastern seaboard, or being pushed into the spotlight before its makers were ready, the E-Class never loses its cool. Or maybe, its elegance. Remember: it’s an icon.