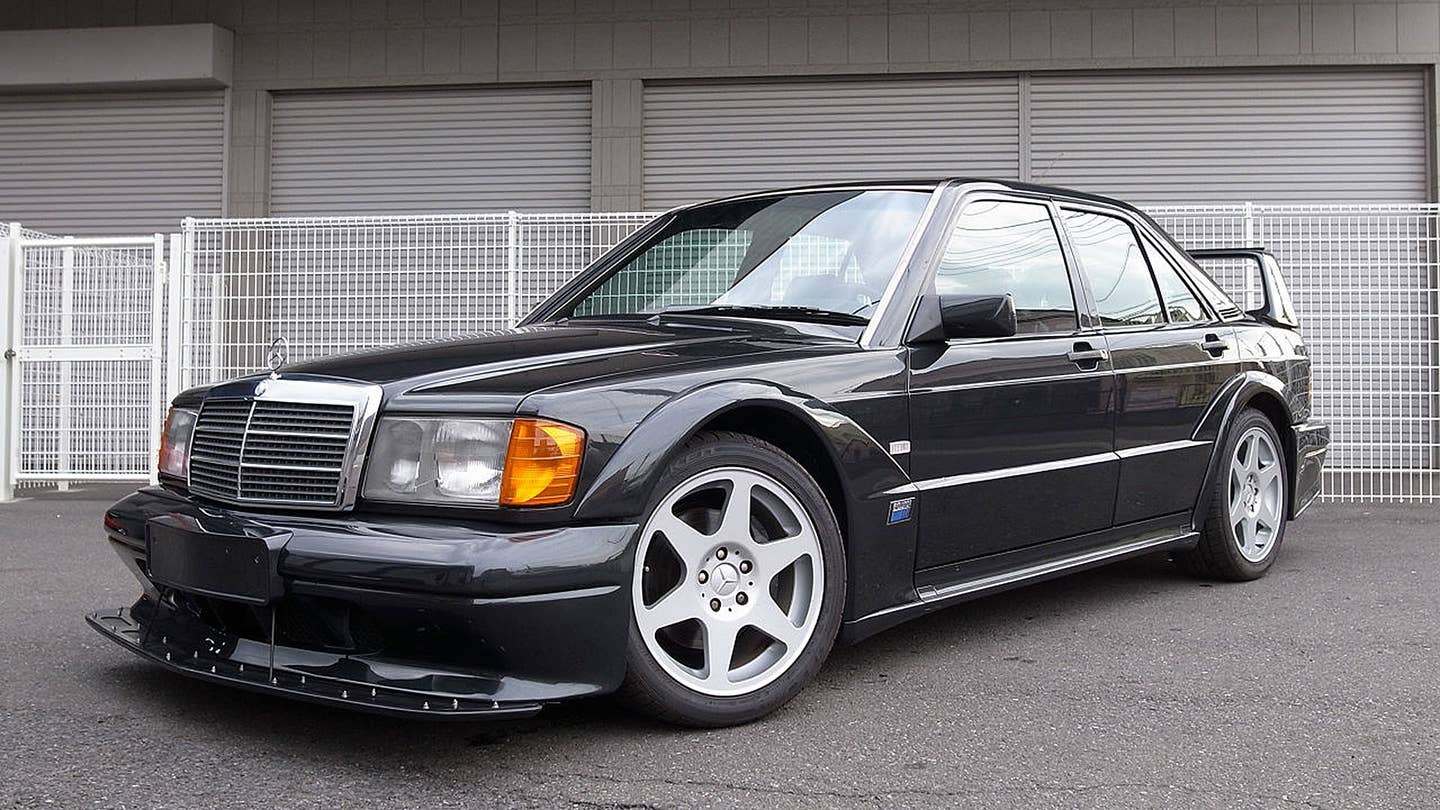 Let’s say you’ve got an extra $279,000 lying around. You could buy a new house, or head to your nearest Mercedes-Benz dealer and order up not one but two AMG GTs. Or you could blow it all on a 25-year old, barely legal Euro race demon in the form of this 1991 Mercedes-Benz 190E Cosworth Evolution II. (Unless you live in California. This sucker’s still not road-legal there.)

Yes, it's a ridiculous sum of money. But here's the thing: if you understand this car's history, you know you're actually buying something special, and maybe even worthy of the sticker price.

Back in the mid-Eighties, Merc actually did sell the 190E 2.3-liter Cosworth-tuned sedan in America. That inline-four was good for 182 ponies and 177 lb-ft of twist—not too shabby for 1986. But never offered on U.S. soil was the Evo 2, a snorting German beast directly homologated from Benz’s Deutsche Tourenwagen Masters (you know, DTM, aka German NASCAR) racing stallion. That monster emerged in 1990 with a reworked AMG 2.5-liter four-cylinder that upped the oomph to 235 horsepower, added in-car adjustable suspension, better brakes, 17-inch wheels, and a fantastic aero package—the latter being vital to keeping what many viewed as the first super-sedan glued to the asphalt. Only around 500 street versions were made; the race version would go onto best BMW and Audi while dominating the German Touring Car championships in 1992.

We've never had Evos here thanks to the NHTSA’s import rule, stating any car not originally sold in the U.S. must be more than 25 years old before it can enter the country. Last year, a 1990 variant hit eBay for around $200,000, and now this 1991 is available. It was No. 345 of the production run of 500, boasts a single owner who apparently kept in “pristine” condition, and has just under 11,000 miles on the odometer. The listing claims it’s “one of the lowest mileage and finest surviving examples known to exist.”

While this car was never campaigned, and the engine remains stock from the factory, with a few tweaks you can get that 2.5L up to race spec and cranking out nearly 400 horsepower. Mated to a close-ratio 5-speed transmission, with an included dogleg gearbox, you could be tearing around race tracks or back roads in short order. Or you garage it for a few years, re-list it and try to make back some of your $279,000. Either way, you’d own a solid piece of German race history. Think it’s worth the price?