We're in England for the reveal of Mercedes-AMG's most hardcore car yet. 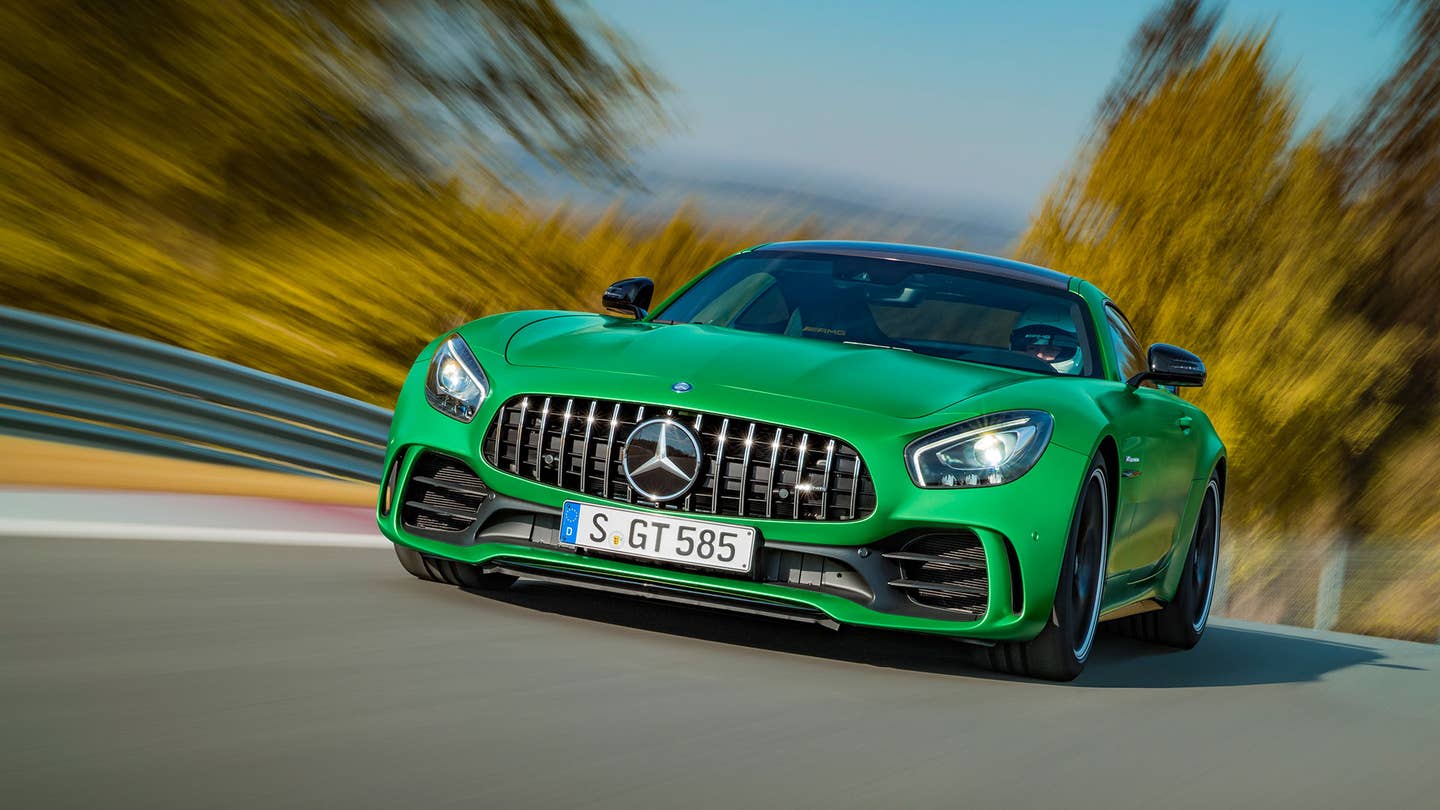 We’re currently in Weybridge, England, at Mercedes-Benz World, where the Brexit bombshell is the second-most interesting thing happening today. The first? The unveiling of the Mercedes-AMG GT R, the German manufacturer’s most hardcore tri-star yet. So hardcore that no expense was spared for the launch. There were helicopters, fireworks, and drifting. Lewis Hamilton, the Mercedes AMG Petronas F1 driver, even swung by to hop behind the wheel.

All well and good. But about the car: People who want flash can buy the AMG GT S; the GT R is for people who want a track-day monster. For proof, start with the color. That lovely hue is officially termed “AMG Green Hell Mango,” a moniker which harkens back to the “Green Hell,” the nickname for the infamous “North Loop” of the Nürburgring, where the super coupe was rigorously tested. Under that elongated bonnet is a handcrafted 4.0-liter transaxle V8 biturbo engine good for 577 horsepower and 516 lb-ft of torque. That’s mated to a specially adapted seven-speed dual-clutch transmission. It’s estimated to rip from a dead stop to 60 miles per hour in about 3.6 seconds, and has a limited top speed north of 200 mph.

That mid-engine and transaxle setup is recognizable from the AMG GT and the GT S, but what puts the GT R at the top of that triumphant podium is its modified suspension, new aero kit, and a staggeringly lightweight construction. It weighs a hair over 3,400 pounds, which gives the rear-wheel-drive bullet a power-to-weight ratio of 5.94 pounds per horsepower. The quest to keep it planted enough to successfully deliver that power saw Merc pulling tech bits off their GT3.

Wider front and rear fenders mean an increased track width for faster cornering. Active aero elements on the front fascia, a sizable rear spoiler, and new diffusers on the rear help beef up grip. There’s also active rear-wheel steering, a nine-way adjustable traction control system, and adjustable coil-over suspension. The suspension has a few settings, including comfort for public roads, sport (meant specifically for the Nürburgring—seriously), and Sport-Plus for Grand Prix circuits, should you have the access.

Part of that new active aero tech is a small, four-pound carbon fiber component tucked into the underbody, just ahead of the engine. It’s practically invisible, though when you hit 50 miles an hour while in “Race” mode, it immediately moves down about an inch and a half to change the airflow. That sounds unimpressive when you read it, but what it results in the Venturi effect, which essentially sucks the GT R onto the road and significantly reduces that front-axle lift. While we don't have a chance to feel this first-hand just yet, Mercedes assures us the driver can definitely feel the effects, noting that the GT R’s steering is as precise as a scalpel when cornering at full gallop, even while under high lateral acceleration. Engineers were so good at getting the drag coefficient down that the GT R comes in at .35 Cd; the AMG GT3 is .36 Cd.

The cost for all of this? Mercedes is being tight-lipped, but expect the car to run around $200,000. Also announced during the affair, expect a GT4 in the not-so-distant future. Whoa boy.