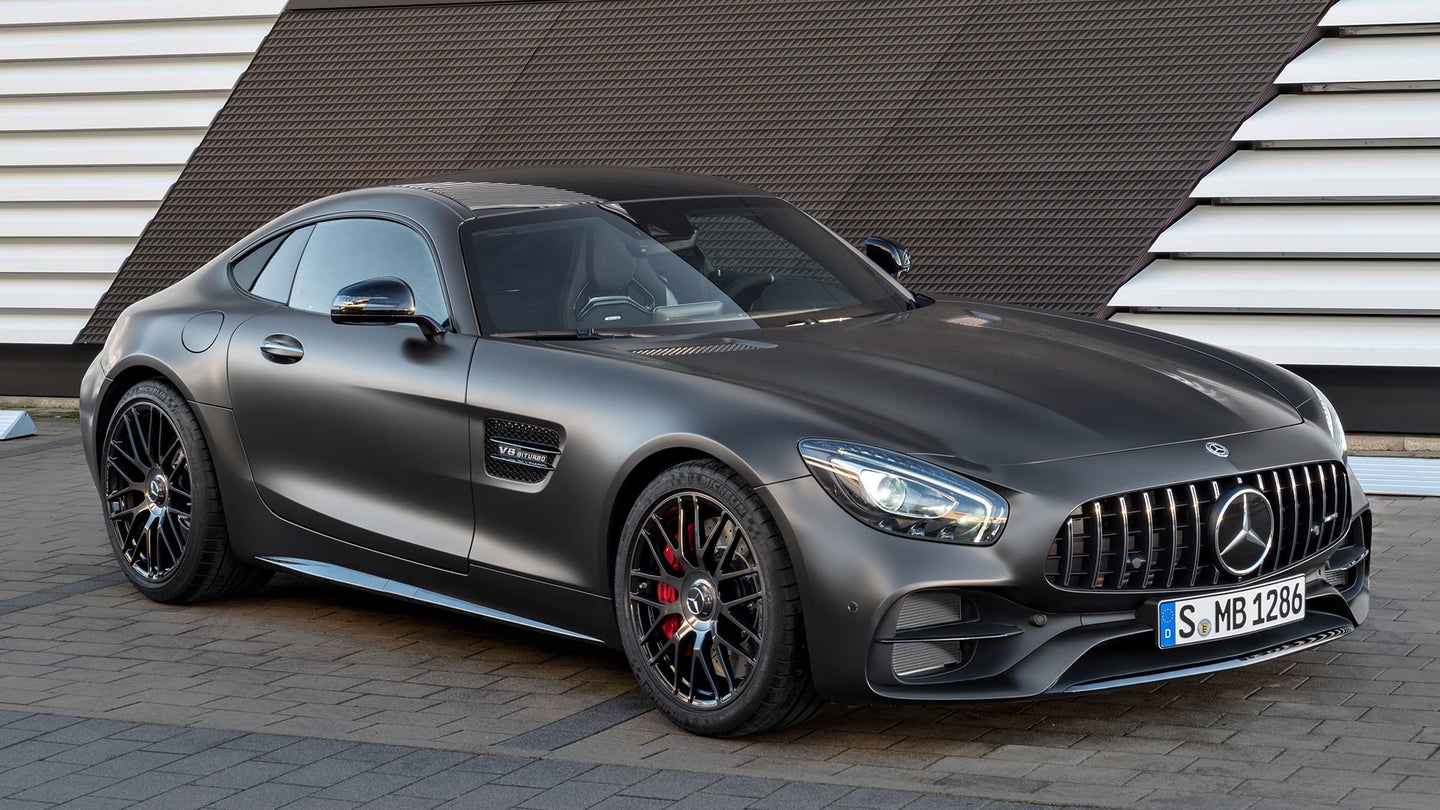 The speed freaks at Mercedes-AMG are keeping the accelerator pinned against the firewall in their development of the German automaker's bespoke sports car, rolling into this year's Detroit Auto Show with yet another series of updates and iterations for the GT range. For 2017, AMG is adding a new model, swapping in a new front fascia across the range, and adding in a variety of new tech that does everything from increase performance to help owners become drivers with the help of their iPhones.

First, though, that new model. Presumably to no one's shock, Mercedes-AMG announced it will be adding a new GT C coupe model to the range. We say we doubt anyone will find it shocking because the automaker already announced the GT C roadster last year, and if German car companies are one thing, it's consistent with their model lineups.  Like the droptop, the GT C coupe sits between the GT S and the GT R models, packing a 550-horsepower, 502-pound-feet version of the shared twin-turbo 4.0-liter V8. The 0-60 mile-per-hour dash takes 3.6 seconds, according to Mercedes, and the GT C hardtop supposedly tops out at 197 mph.

The fenders out at the ass end are as wide as the ones on the GT R, letting it use the same wider back wheels as the badass top-tier model (while also giving the car an extra dash of sex appeal). And as in the GT R, those rear axles have the ability to help steer the car, turning opposite the fronts at low speeds and in the same direction as them at higher velocities.

Whether you go for the big-bore GT R, the entry-level GT, or any of the models in-between 'em, every 2018 model-year version of the sports car comes with the 13-bar "AMG Panamericana" grille first seen on the Beast of the Green Hell. On the GT and GT S models, that grille sits in front of retuned versions of the communal V8; the base model now makes 469 hp and 465 lb.-ft., while the original version now cranks out 515 hp and 494 lb.-ft.

Below that new grille sits a set of active louvers pulled from the GT R and applied across the range. Designed to flip open and closed in as little as one second, the vertical flaps regulate the amount of cool air flowing to the engine, adding to it during periods of heavy load and closing up for better fuel economy at other times.

But one of the most interesting changes to the 2018 GT range isn't just about new hardware. The AMG Track Pace option syncs the car up with the driver's iPhone using wi-fi, then beams a bevy of track telemetry and other data—speed, steering angle, gear, etc.—back to the phone for analysis and review. It can save lap times on tracks it's pre-programmed to know, or learn new circuits. And it even uses the iPhone's camera to record video of the laps, thus making it that much easier for you to upload your epic lap to Instagram.