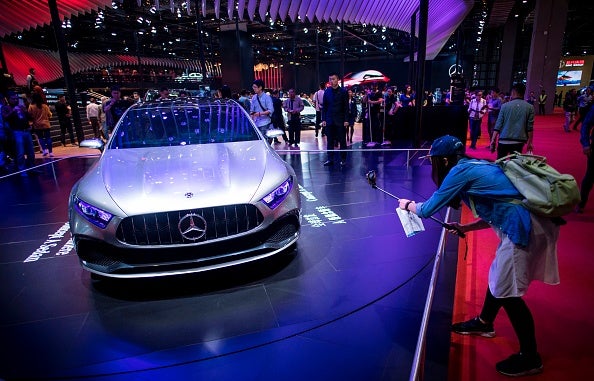 In some of its larger cars, Mercedes-AMG has adopted a two-tier strategy in the naming of its performance-oriented variants. For example, the current C-Class is offered in C43 AMG trim, sporting a 3.0-liter twin-turbocharged V6 engine, whereas the mighty C63 AMG features the explosive 4.0-liter twin-turbocharged V8. However, as far as Mercedes's compact cars go, the A-class offered in overseas markets, as well as the CLA compact sedan and GLA compact crossover, are only offered with a single AMG option. To broaden the selection, the touted '45' models will be joined by a newer, less powerful but also less expensive AMG model. As AMG Chairman Tobias Moers confirms, "The compact car family is going to be extended. We will complement our successful '45' models with new performance versions, with two versions, like we do with larger cars."

The next generation of performance compact cars from Mercedes looks to be an exciting lineup. The Concept A sedan debuted at the 2017 Shanghai Motor Show in April, and impressed with its smooth and sweeping lines that mirrored the design language seen in the current C-Class and E-class models. Keeping in tradition with the bulking up of models across all carmakers, the next-generation CLA measures taller and wider, but shorter than the current car. Mercedes-Benz chief of design Gorden Wagener claims that the Concept A marks the end of creases in the design language of the German automaker. Exciting new touches include flush door handles like those found on the Tesla Model S, and a front end based closely on the Mercedes-AMG GT. Finishing off the design, the next-generation CLA, presented as the Concept A, sports 20-inch wheels—a monstrous size considering the car's compact nature. We will see if these bold details will be carried through to production.

Fuel economy and low emissions are the goal of Mercedes’ new four-bangers.

The Mission E concept could be just the beginning.