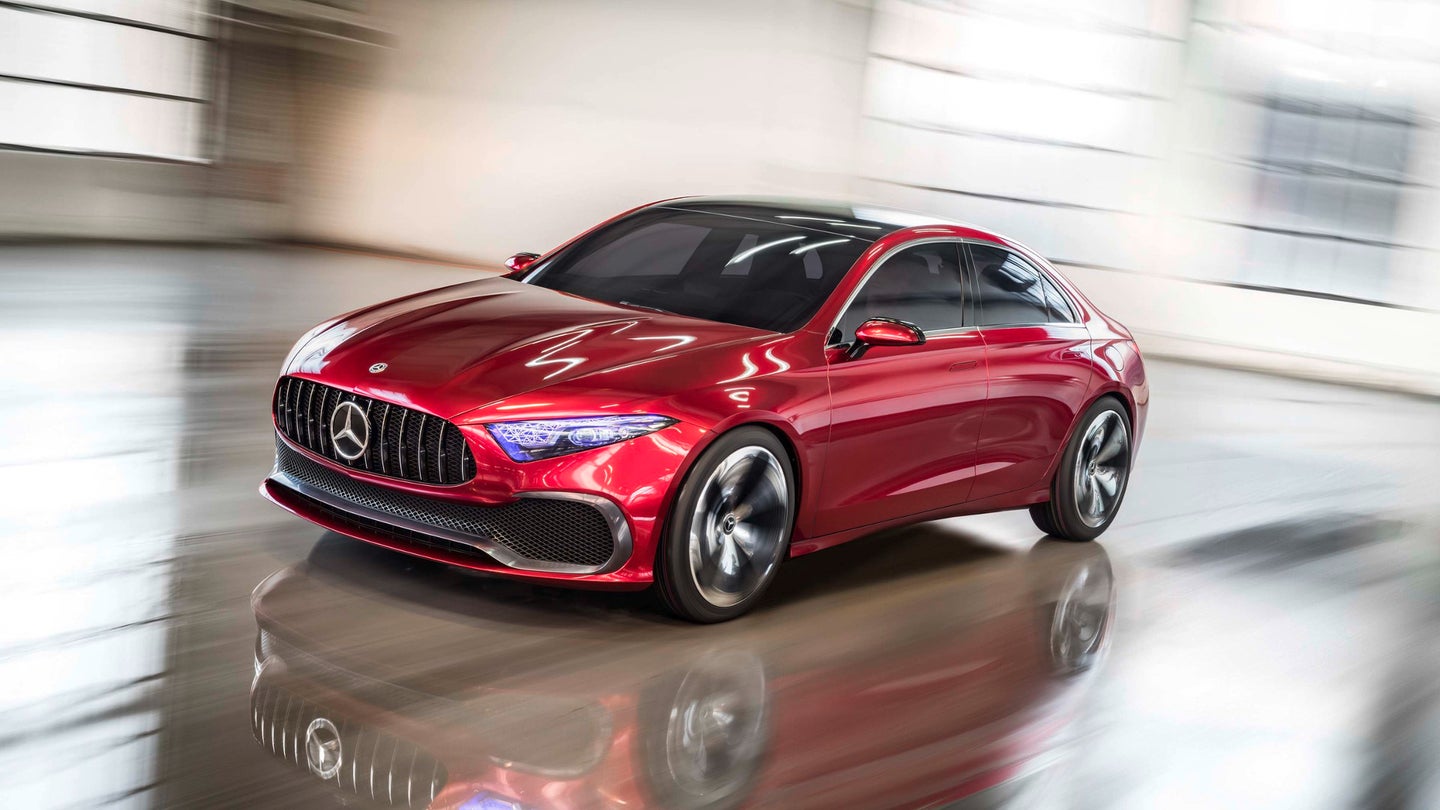 The updated 2018 Mercedes-Benz S-Class may be hogging the spotlight at the Shanghai Auto Show, but the fine people at Daimler want everyone to know they've also got big plans for the future of their small-car lineup. Enter the Concept A Sedan, a sharp-looking preview of their "Sensual Purity" design language that figures to spread from the entry-level A, B, and CLA-Classes up through the rest of their models. And if reading that name sent your eyeballs spinning into the back of your head, just remember that it follows the rule we all learned from Animal House: "Vegetables are sensual. People are sensuous."

Debatable branding aside, the Concept A Sedan does feature some significant changes from the current CLA-Class. If you miss Mercedes's boxy '90s sedans, reading "the time of creases is over" may have you panicking a bit, but the Concept A actually features noticeably straighter lines and a more pronounced three-box sedan shape than any of their current cars. Add flared fenders, more angular headlights, and the Panamericana grill from the AMG-GT, and the result is surprisingly tidy and well-proportioned for a concept car. Smaller overhangs both front and rear give it a more aggressive stance—it's shorter and wider than the current CLA—while the long hood recalls Mercedes's iconic roadsters.

"With its perfect proportions and a sensual treatment of surfaces with reduced lines, it is the next milestone of ‘Sensual Purity’ and has the potential to introduce a new design era," Daimler AG design chief Gorden Wagener said in a press release. And it's not a stretch to imagine much of this package making it to the production version of the next A or CLA-Class and beyond, minus those crazy-intricate headlights and flush door handles. Whatever this concept becomes, it will be the first car launched on Mercedes' new MFA2 platform, which the company developed specifically to expand their small-car lineup.

Even if you're not sold on the idea of a low-cost Mercedes, the CLA-Class has been important for the brand from both a financial and design standpoint in the United States. As their cheapest car on sale in this country since it launched in 2013, it provided a key foothold in the burgeoning low-end luxury market and also previewed the design language that spread all the way up through the current E and S-Classes. It may have earned its fair share of critics over the quality concerns and the somewhat-blobby design, but the CLA has been one of the brand's stronger-selling models and you can bet they're banking on its successors to continue that streak.