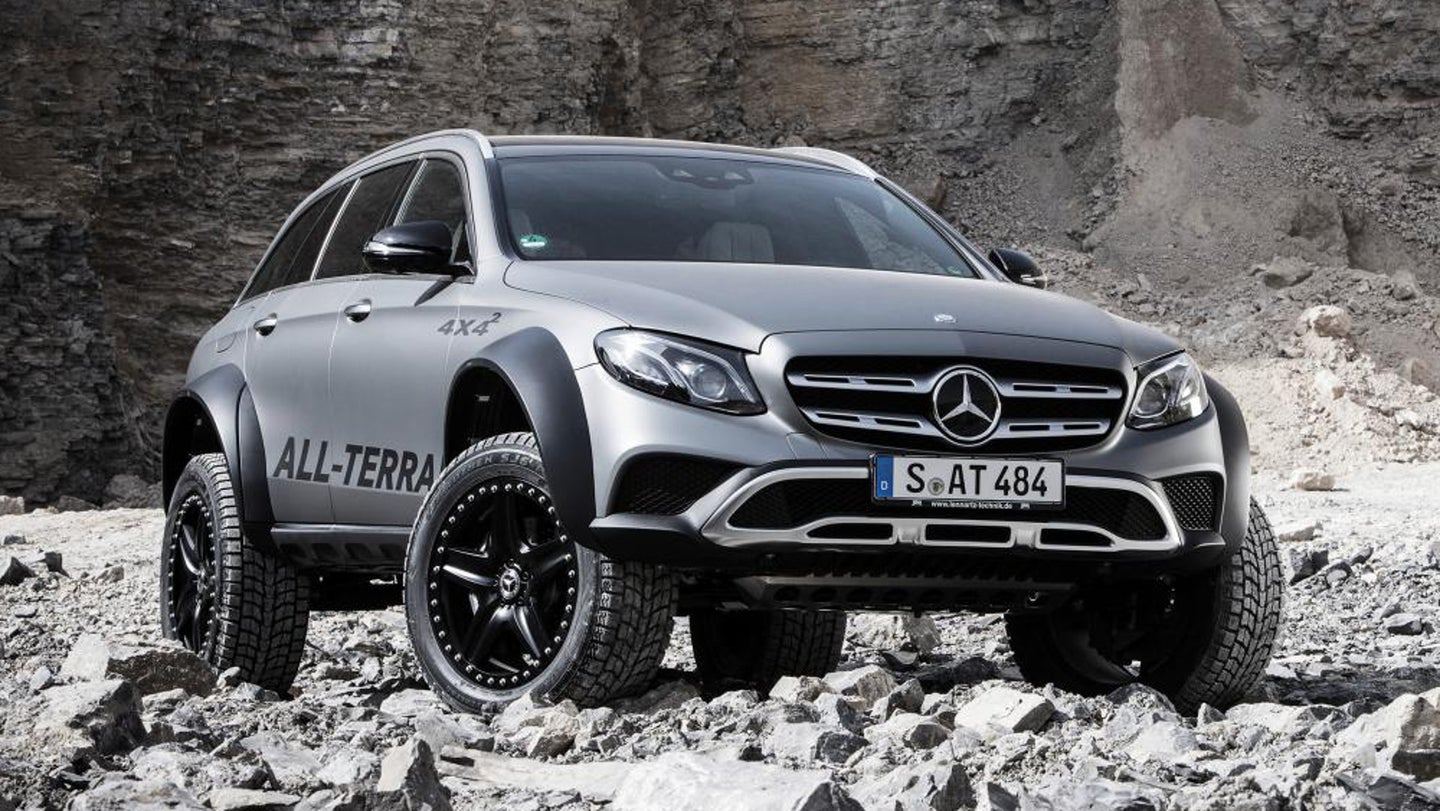 Despite the fact that most Mercedes owners wouldn't dream of taking their Benz too far off the beaten path, the company continues to chart a course off-road with its wildly ludicrous G63 AMG 6×6 and just-slightly-less-insane G500 4x4². And thanks to one ambitious employee, there's now one more member of the portal axle party: the Mercedes-Benz E-Class All-Terrain 4x4² wagon.

Starting out as an idle thought in the wonderful brain of E-Class All-Terrain engineer Jürgen Eberle, who Auto Express reports wanted to put the "all" in "All-Terrain," the E-Class All-Terrain 4x4² takes Daimler's medium-duty wagon and adds body cladding, flared fenders, and the pièce de résistance, the portal axle setup from its off-road stablemates. The result is an ultra-lux longroof with around 16 inches of ground clearance, beefy 31-inch tires, and an eight-inch wider track from stock.

Even though it's powered by a 3.5-liter turbocharged V6 engine putting out 328 horsepower, thus missing some of the low-end torque found in the diesels available on the standard model, Auto Express didn't find it wanting for power when the going gets rough. German outlet Auto Bild also managed to score some seat time, and you can check out some off-road footage from their review below (again, it's in German, but stay for the pictures):

There are a few limits for the E-Class All-Terrain 4x4², though—it may have more ground clearance than a Jeep Wrangler, but a lack of locking differentials, a low range gearbox, and solid axles mean that traction is always going to be an issue. In fact, you can see it straining to flex in this promotional shot put out by Daimler, and the wheel that's off the ground appears to be spinning away. The electronic 4MATIC four-wheel-drive system can only take you so far.

And while this magnificent machine is officially being referred to as a "concept" for now, Auto Express reports that the overwhelmingly positive response from consumers so far has convinced Mercedes to at least consider an extremely limited production run. We'll definitely be keeping an eye on that.