Behold the Mercedes-Maybach S650 Cabriolet in All…Well, Some of Its Glory

We’ll have to wait until Wednesday to see all of it. 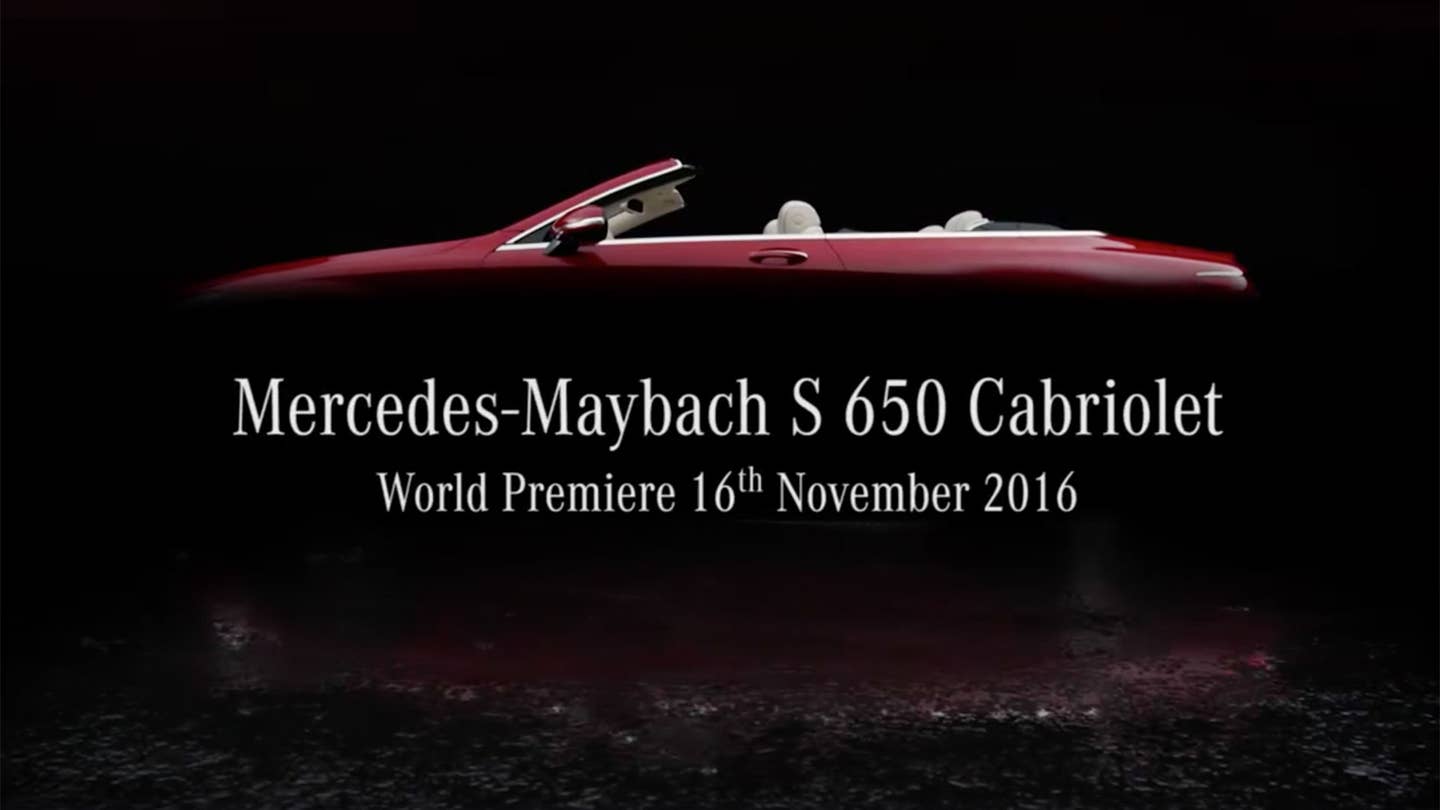 Since Maybach rose from the grave in 1997, Mercedes-Benz’s ultra-luxury division has stuck to offering just one style of car: four-door sedans. That all changes on Wednesday, however, when Daimler will reveal the new Mercedes-Maybach S650 Cabriolet at the L.A. Auto Show.

The carmaker dropped the drop-top bombshell on Saturday via a teaser video on its Facebook page. As is the style these days, the video reveals little of the car—albeit far more than the similar teasers from Jaguar and Porsche. Based on the clip, it seems the new car will be based on the S-Class Cabrio, upgraded with all the high-quality materials and comfort features seen in the Mercedes-Maybach S600.

Mercedes-Benz’s extra-bougie sub-brand has been two-door concepts along the way—the Darth Vader-esque Maybach Exelero of 2004, for example, as well as the sweeping Vision Mercedes-Maybach 6 Daimler unveiled at Pebble Beach this year. But the S650 Cabriolet will be the first production two-door car in more than half a century to wear the double-M badge.

Nothing in the clip is all that surprising, but a couple of details from the short video raised a couple eyebrows around The Drive’s offices. First off, the alphanumeric part of the car’s name: S650. Mercedes has long since abandoned the tradition of using the name to indicate the displacement of a car’s engine, so we’re guessing this car uses the same 6.0-liter V12 spread across the pinnacle of the Benz/Maybach/AMG range in various states of tune. But why S650, instead of S600, like with the Maybach sedans? Does this mean the car will use the 621-horsepower version of the V12 from the S65 AMG?

Secondly, the cupholder cover boasts silver trim reading “1 of 300.” Clearly, the car seen here is meant to be some sort of limited edition. But does that mean Mercedes will restrict itself to just 300 Maybach S650 Cabrios for the entire globe? Or is the car on display in the video one of a small batch of special editions meant to mark the arrival of the S 650, the way Mercedes-AMG launched the C63 coupe with the Edition 1 Package?

Guess we’ll find out on Wednesday.