Mercedes-Maybach Unveils a Gullwing Vision of a Coupe

Ahoy, billionaires: Your mega-yacht has docked at Pebble Beach 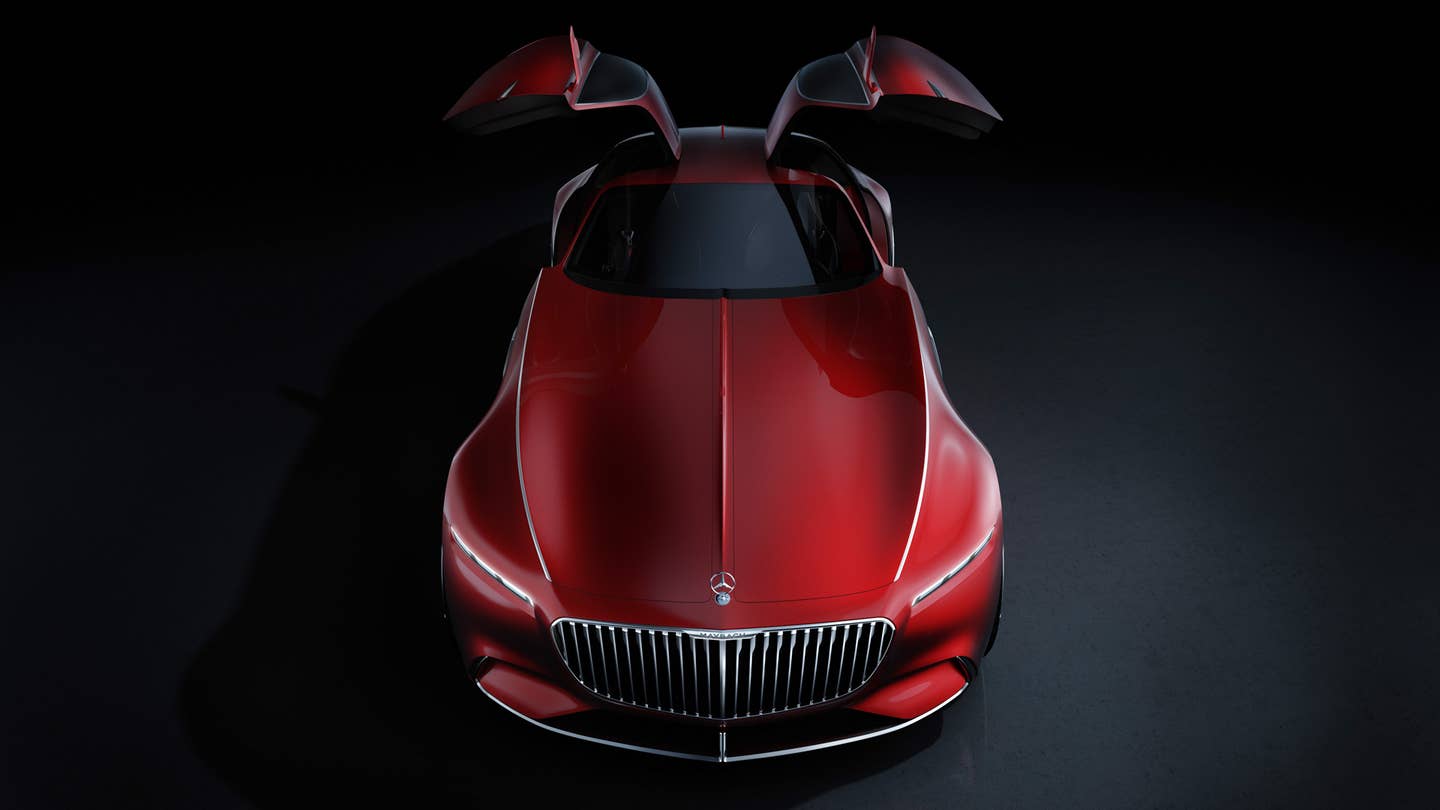 At the annual Pebble Beach concours, new cars tend to pale before the classics. But not the Vision Mercedes-Maybach 6 concept. This cherry-red stretch of billionaire’s taffy recalls history’s most over-the-top coupes, even as it couches a modern Tesla threat with electric drive, ultra-fast charging, and an interior that adjusts to human vital signs.

Unveiled at Mercedes’ Star Lounge, a shanked drive off the third tee of the famed Pebble Beach Golf Links, the boat-tail Maybach coupe thumbs its lengthy nose at critics who see the current Maybach S600 sedan as merely a tarted-up S-Class—even if the tart in question starts from $190,000.

If the four-door Maybach is conservative enough for Beijing’s ruling party, this stunning coupe is down for any party; we’d recommend the Met Gala for starters. This big ‘Bach recalls Cupid’s arrow, a cinematic teardrop, or maybe the world’s most expensive tube of red lipstick. And by conjuring classic aero coupes from the Bugatti Atlantique to Mercedes’ own pre-war dreamboats, the Maybach actually holds its own in the mobile museum that is Pebble Beach.

“Anytime you see something amazing here, it’s instantly erased by something even more amazing,” said Rob Moran, Mercedes product spokesman. “So if you’re going to show a car here, it has to be pretty outrageous.”

Looking to spoon more caviar from an ultra-luxury segment once hogged by Bentley, Rolls-Royce, and Aston Martin, Mercedes has broadly hinted at plans to expand the Maybach lineup. Models like the Bentley Bentayga offer three-ton cues to the most obvious, potentially profitable candidate—a Mercedes Maybach SUV. Yet a two-plus-two coupe in the mold of the Rolls-Royce Wraith or Aston Martin DB11 also makes sense, not least on the money-washed shores of Pebble Beach.

The Maybach itself might fit at the docks, at an insane, ocean-going length of 224 inches from stem to boat-tailed stern. That’s 26 inches beyond an S550 Coupe, 17 more than the Wraith, and just a half-foot shy of a hulking Rolls-Royce Phantom. The hood alone seems the size of a Mazda Miata, topped by a three-pointed star. Like chrome party streamers, 25 slats pour down the Maybach radiator grille. Thigh-high 24-inch wheels are shielded by translucent red covers, their alloy spokes glowing within. If it’s not imposing enough, check out those gullwing doors, a hinged link to Mercedes’ best-known coupe, the vintage 300 SL. Cameras on fenders beam the rear view, a good thing considering the Mercedes’ microscopic glass area and view-blocking split rear window.

Eleven-tenths scale aside, the Maybach isn’t retro in any way. Yet it fits sweetly on a continuum of fabulousness that includes the 1938 Maybach SW-38 Special Roadster; Mercedes’ streamlined “motorway couriers” like the 500K and 540K Special Coupe; or Benz’ stunning, one-off 1938 540K Streamliner that stormed Pebble Beach two years ago.

Mercedes says the LED-lit side sills clearly show that the Maybach is an electric car. And this car has plenty of kilowatts to waste, with 738 all-wheel-drive horsepower from four synchronous electric motors, a claimed 0-60 mph burst in under four seconds, and a range of more than 200 miles. Mercedes says this drive system is “in series development” for production cars.

The Maybach also shows off the hoped-for pinnacle of the CCS (or “Combined Charging System”) standard, backed by a consortium of European automakers, and a riposte to Tesla’s supercharger network. With a maximum capacity of 350 kW, Mercedes claims its coupe could slurp up 100 kilometers of range, or 62 miles, in just five minutes. The electric powertrain also leaves enough room under that massive hood for a pair of custom suitcases, along with picnic gear and other accouterments.

In the wake of the exterior’s splendor, the digital fakery of the “360-degree lounge” interior is a mild letdown. It’s one of those future-shocking concept interiors that automakers have teased for years without delivering—sll floating bridges, Eames-like chairs, and see-through, blue-lit ligatures that recall the beautiful bot in Ex Machina, but with most every shape and gizmo likely bound for the cutting-room floor. That is, if Mercedes decides to bring a coupe like this to showroom floors.

Playing along, we enjoyed the windshield that doubles as a transparent display like in Minority Report. Floors are lined in elm, apparently the palest of open-poor woods, which Mercedes is developing for series use. Most fancifully, traditional “buttons” on padded leather upholstery are actually body sensors that scan occupants’ vital functions and activate seat climate or massage settings accordingly. (Adding EKG and other monitors is a solid idea for Pebble Beach, its wizened collectors often appearing one NASDAQ-point drop from an early funeral.)

The sensors also detect cabin light, the color of passengers’ clothing, and ambient temperature, to trigger what Mercedes calls “new, emotional lighting effects in the interior.”

Auto journalists, always easy marks for spectacle, were practically chanting “Build it! Build it!” inside Mercedes' beachside Colosseum. Yet the sheer scale of the Maybach—not to mention the frivolous waste of under-hood space where a traditional engine would go—makes one wonder about feasibility, at least beyond China and the palaces of the Middle East. It’s the kind of Titanic throwback coupe that other luxury automakers have floated (as with Cadillac 16 concept in 2003) before pulling the plug, or staged as one-offs, like Maybach’s own Exelero of 2004.

Moran emphasized that the Maybach is purely a concept for now, though he added a “never say never” caveat:

“It’s meant to be a dramatic, over-the-top design,” he said. “The point of the car is to show what’s possible, and a potential design direction.”