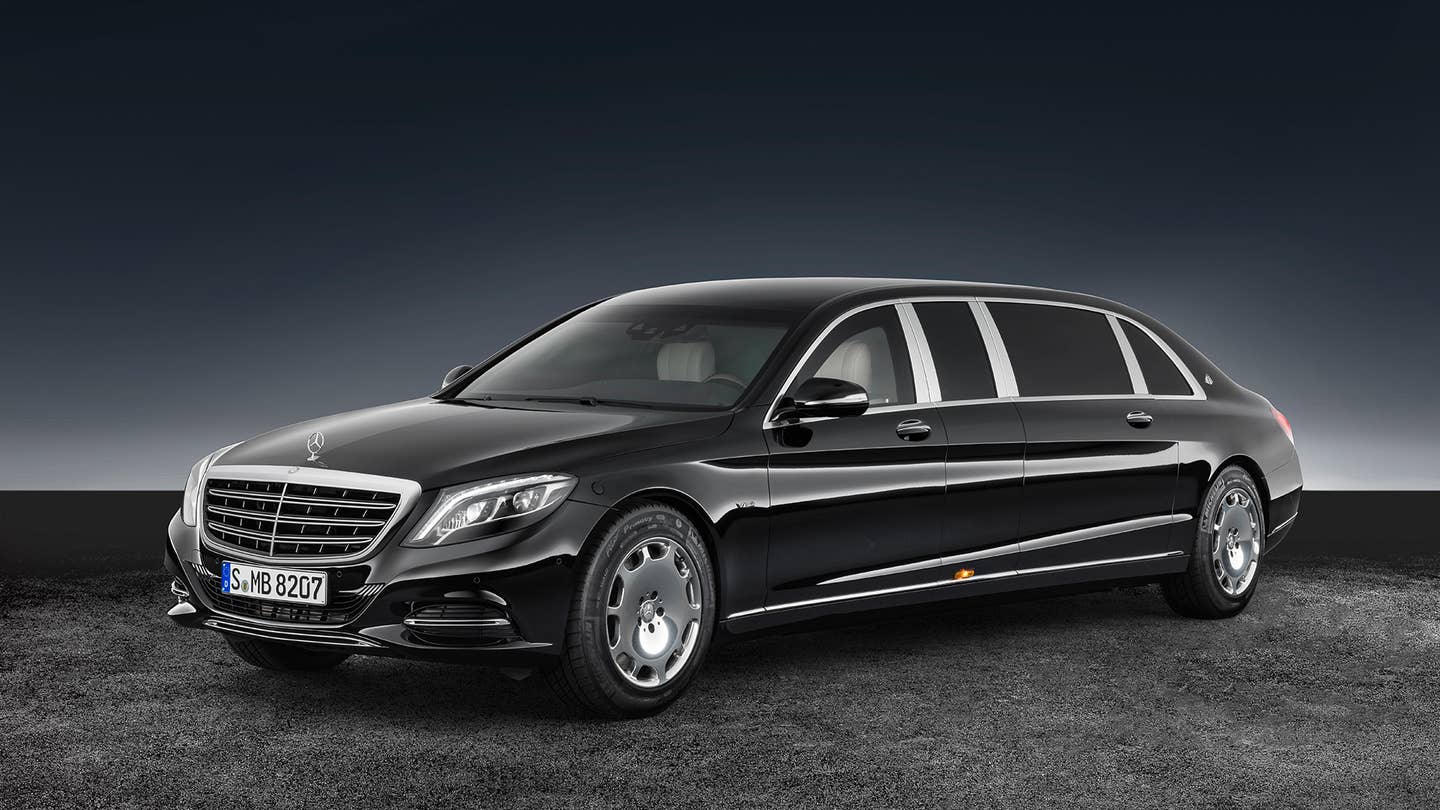 Hey there, friend. Are you the ruler of a small- to medium-sized nation with an extremely oligarchical balance of wealth? Do you need a means of transportation that combines the opulence of your palace with the indestructibility of Superman’s tuchas? Then Daimler has just the car for you: the Mercedes-Maybach S600 Pullman Guard.

From the outside, the Guard looks all but identical to every other S600 Pullman; beneath the surface, however, lies a veritable tank factory worth of armor. Every possible inch of the Pullman Guard—both sheet metal and glass alike—is armored up to a VR9 level of protection. In case you haven’t been keeping up with your subscription to Endangered Dictator Monthly, that means this Maybach can withstand sustained fire from pretty much every type of small arms on the planet. Even if your foes manage to close within 30 feet of you with an M14 EMR and pump three 7.62x51 mm NATO rounds into the window, you’ll stay untouched in your leather throne.

Even if your would-be assassins come packing explosives to blast ordinary car to pieces, you’ll still be sitting pretty, as the Pullman Guard is tough enough to meet ERV 2010 blast protection standards. Which means it can take the force of 33 pounds of exploding TNT from a mere six and a half feet away. So long as those pesky rebels don’t manage to steal a Sukhoi, you’ll be fine.

Of course, as with the short(er)-wheelbase Maybach S600 Guard, all that armor adds weight. The S600 Pullman Guard weighs in at more than five and a half tons; hardly much of a challenge for the 530-horsepower twin-turbo V12 sitting up front, but it makes opening and closing the doors something of a challenge. To compensate, Mercedes has added electrical motors to help you—excuse us, your manservants—operate the four portals. The windows are even hydraulically operated, just like those gorgeous Pullmans owned by the likes of Papa Doc Duvalier and Idi Amin.

And while it may be tougher than most Humvees, the Pullman Guard is still a Maybach, so it comes equipped with all the luxury accoutrements you’d expect. The two main seats recline all the way to 43.5 degrees—the perfect angle for watching your daughter anchor the state-run nightly news broadcast on the 18.5-inch monitor mounted to the bulkhead between the driver’s compartment and you. A pair of backwards-facing jump seats mean the Guard has room for up to three female companions. And should the standard specification not be to your liking, Mercedes will happily tailor the interior to your heart’s desire. (Note: we assume Maybach has a bring-your-own-whale penis-leather policy, so plan accordingly.)

Of course, all this safety and style doesn’t come cheap. The German list price for the Mercedes-Maybach S600 Pullman is €1.4 million. That’s about $1.56 million at current exchange rates...or just shy of 80 pounds of gold bullion, if you prefer.

Oh, and be sure not to commit any war crimes egregious enough to bring the U.S. down on your ass. Guard model or not, the A-10 Warthog’s cannon will cut through any Maybach like butter.