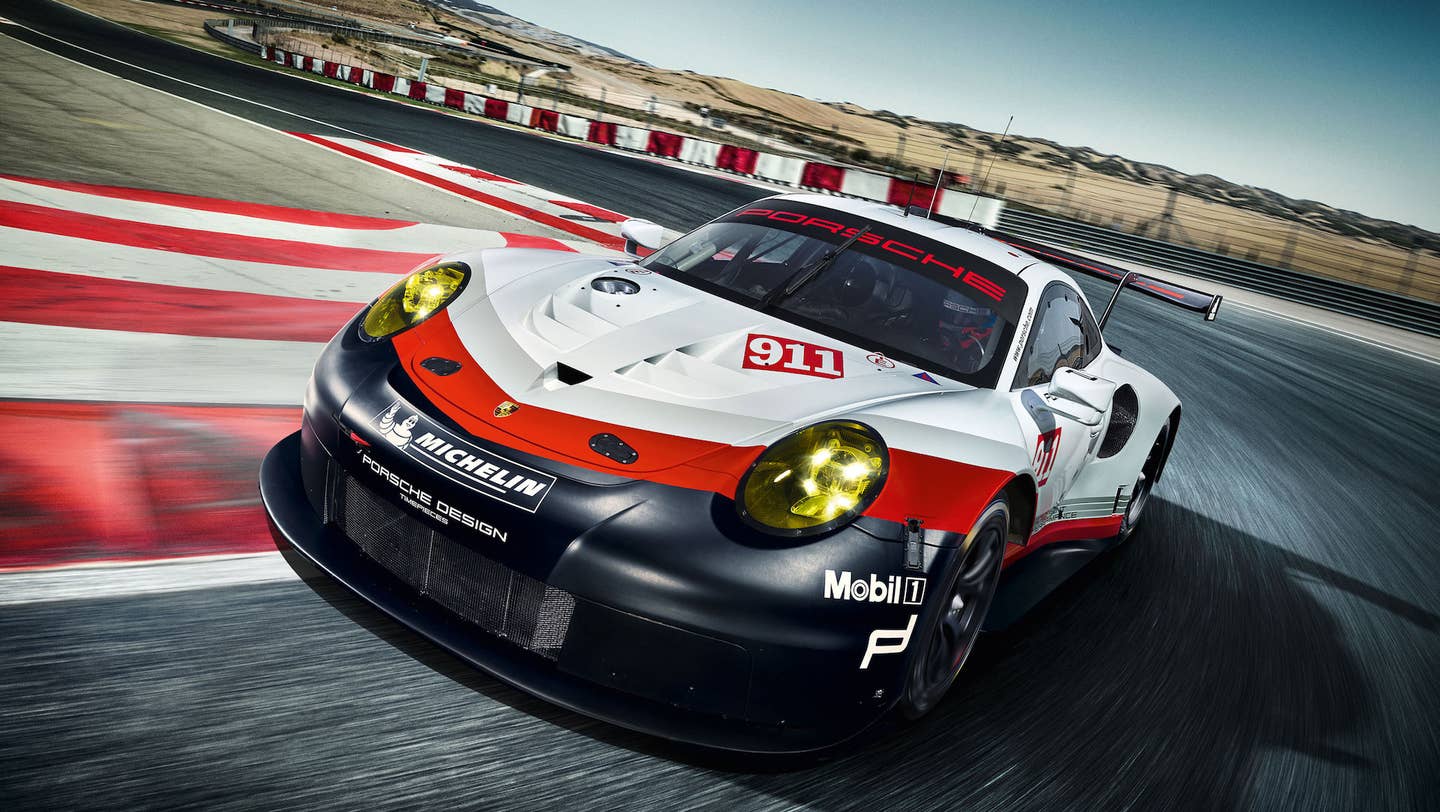 Uncork the champagne and pass around some cigars. We're celebrating the birth of a new factory race car from Stuttgart. Porsche officially unveiled its new mid-engined, 911 RSR GT race car, at the Los Angeles Auto Show Wednesday. Isn't she lovely? Isn't she wonderful?

The new 911 RSR's mid-mounted engine is a newly-developed, naturally-aspirated 4.0-liter flat-six that the German automaker said pumps out 510-horsepower through a six-speed sequential gearbox. And not only does the new 911 RSR have a new, more-forward motor, it's also significantly better than its predecessors in every other way, shape and form. “While retaining the typical 911 design, this is the biggest evolution by now in the history of our top GT model,” said Porsche Motorsport head Dr. Frank-Steffen Walliser.

One of the areas Porsche said the new 911 RSR truly excels is aerodynamic efficiency, thanks to a top-mounted rear-wing- borrowed straight off the 919 Le Mans car. Additionally, a badass, huge diffuser hanging off the rear of the car, will helps retain downforce. Given all of that, we can't even fathom how capable this beast will be on the track.

Porsche is adding collision avoidance tech, too. The 911 RSR is getting a radar-based system that gives its driver a heads-up if a faster car is coming up behind it so that the racer can move out of the way without issue. That might sound silly but, as we've seen before, those can be harrowing and treacherous situations. Remember Mike Rockenfeller's crash at Le Mans in 2011 where his R18 was obliterated after a mishap with a slower GT car?

The new 911 RSR will make its race debut at the 24 Hours of Daytona in January 2017. The company also plans on fielding the new car at 18 other events globally. Those races will be part of the World Endurance Championship – including the 24 Hours of Le Mans – and the IMSA Weathertech Championship in America.

The automaker strongly believes its new car is up to the challenge. “Since its first rollout in Weissach in March this year we’ve covered 35,000 test kilometers on racetracks in Europe and North America – that’s more than in the development of any other Porsche GT racer," said Marco Ujhasi, Head of Porsche GT Factory Racing. May all that time spent lead them to a podium or two.