This one’s all about going for the gusto...and the win. 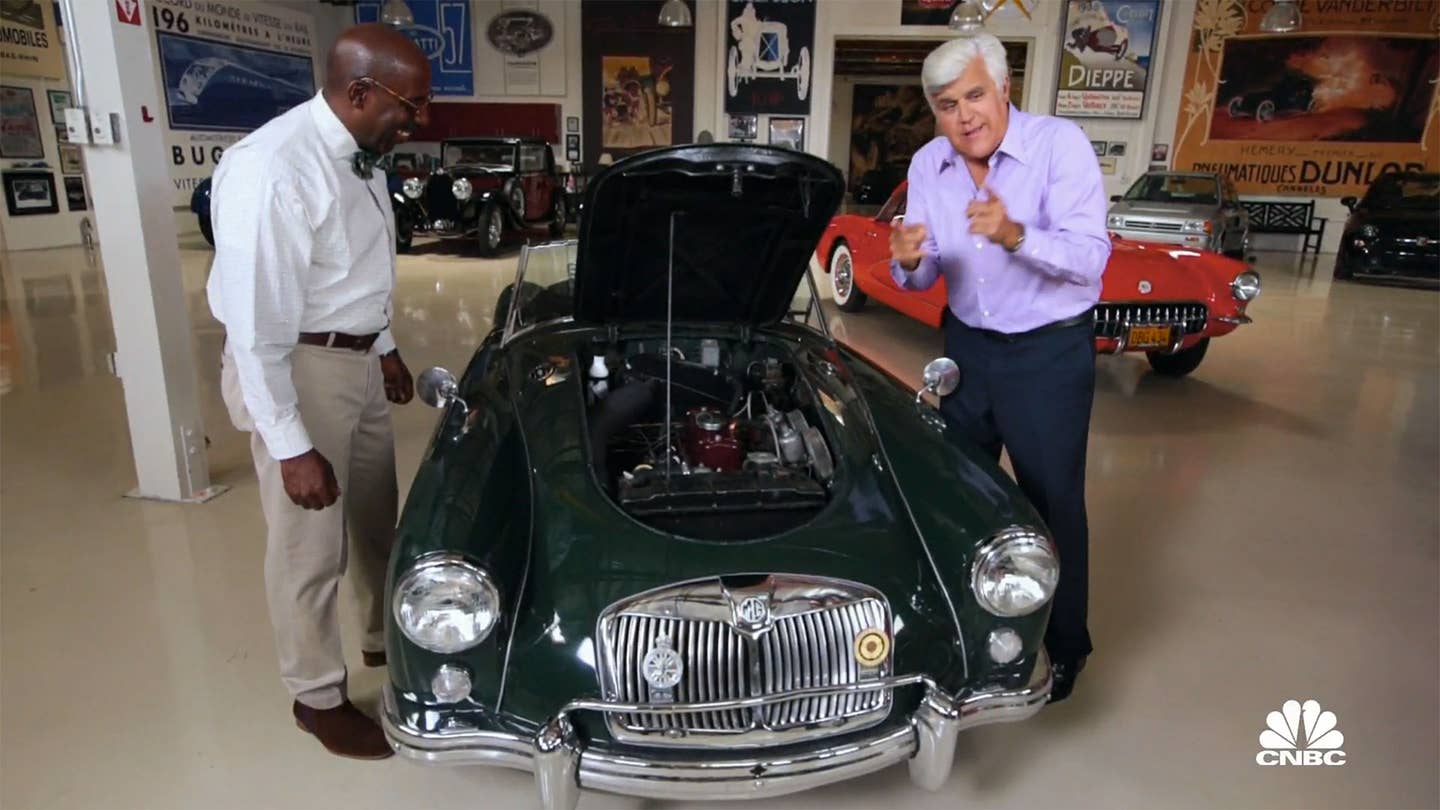 It was rivalry central on last night’s CNBC episode, dubbed “Competitive Nature.” Jay Leno, our affable denim-ensconced host, dives into the battle of man versus autonomous machine, Ford’s iconic duel with Ferrari, and Mario Andretti against, well, everyone. Spoiler: Andretti finishes second to Leno when it comes to chowing down spaghetti and meatballs. Our favorite revelations:

8 - The 1918 Columbia Pope motorcycle was the world’s first crotch rocket. Upon its debut, the Pope’s V-twin, 61 cubic inch engine resulted in a blistering (for the era) top speed of 70 miles per hour. It also featured a plethora of technical innovations, including front and rear suspension, chain drive and a multi-speed tranny. With a price of $250, it was expensive, only ten dollars cheaper than a new Model T.

7 - Audi’s autonomous RS7 cars will drive Pikes Peak better than you. Developed in conjunction with Stanford University engineers, Audi’s self-driving race bomb, nicknamed Robby, is an nimble marvel. Its predecessor, brother Bobby, is much fatter, carrying an extra 800 pounds due to a trunk full of processing units, wires and other electronics. That didn’t stop Bobby from flawlessly zipping up the nefarious Pikes Peak six times back in 2010 without a soul inside.

6 - Robby sticks to the ideal race line like glue. Robby’s brain is more advanced than Bobby’s. (Sorry, Bobby. Mother always liked Robby best.) With a better CPU, Robby can compensate for things like tire wear as its shoes heat up while racing, figuring out how to reposition itself to find the best grip. It won’t make a single mistake while attacking any track, even at more than 100mph, and it never deviates from the ideal line. Given similar conditions, the time differential between Robby’s laps is .1 seconds.

5 - However, man is still faster than machine. Robby set a respectable time of 2:02.2 around Sonoma Raceway, with Leno in the car and an Audi engineer behind the wheel, holding the kill switch. This particular fellow didn’t care much for Leno’s wisecracking. After each quip, the stone-faced gent only replied with a flat, “Ya.” When Leno drove, he put up a 2:01.4. Suck it, Robby. Sure, Leno did it with a lead-follow behind a pro race driver, though he did repeatedly try to overtake the instructor in the braking zones.

4 - Our own A.J. Baime finally rides in a Ford GT40. Few know more about the Ford’s intense rivalry with Ferrari than our Editor-At-Large A.J. Baime, who penned a bestselling book about the feud, Go Like Hell. Baime met Leno to recount the story of a failed bid by Ford to acquire Ferrari, which fueled a very expensive endeavor to best Enzo. Ford’s lethal weapon was the GT40, which trounced Ferrari four years straight at LeMans. For this segment, Leno was loaned a 1967 MK III, one of seven road versions of the GT produced. The 289-powered beast churns out 306 horsepower and will set you back about $4 million bucks, should you want one. While Baime has sat in plenty, he’d never been for a ride so Leno took him for a spin, which looked cramped yet fun.

3 - Paul Newman showed up a Ford test driver so bad, the man crashed. Leno sat down with legend Mario Andretti in an Italian restaurant to talk carbureted glory over plates of carbs. The race god shared how he once brought Paul Newman to a test session with Ford and Newman ran faster than the factory drivers. One embarassed Ford driver got in after Newman and, trying to save face, he pushed it hard. Too hard. He ended up binning it.

2 - If you’re pulled over for speeding, it helps to have Andretti sitting shotgun. While piloting the 731 horsepower, V12 behemoth that is the 2015 Ferrari F12berlinetta, Andretti recounts how he was in town for the Long Beach Grand Prix, when fellow racer Vince Granatelli wanted to go for a drive. With Granatelli driving, they got stopped and the cop asked, “Who do you think you are, Mario Andretti?” Granatelli replied, “No, but he is.”

1 - A 1955 Ford Thunderbird is a sound investment for 50s sports car enthusiasts. This installment of Assess and Caress with appraiser Donald Osborne brings a ‘55 Thunderbird, a ‘58 MGA and a ‘56 Corvette. All successfully campaigned in racing, but the best bang for your buck is the ‘Bird, having appreciated 25% in five years. However, we think the Corvette is better. This particular solid red number is rare, deviating from the normal two tone colorway. It also scored a whopping 98 points in National Corvette Restorers Society judging. While it’s worth has only increased about 2.5% in half a decade, Osborne sees strong potential for that percentage to grow significantly in the coming five years.