It's never too late to go racing. 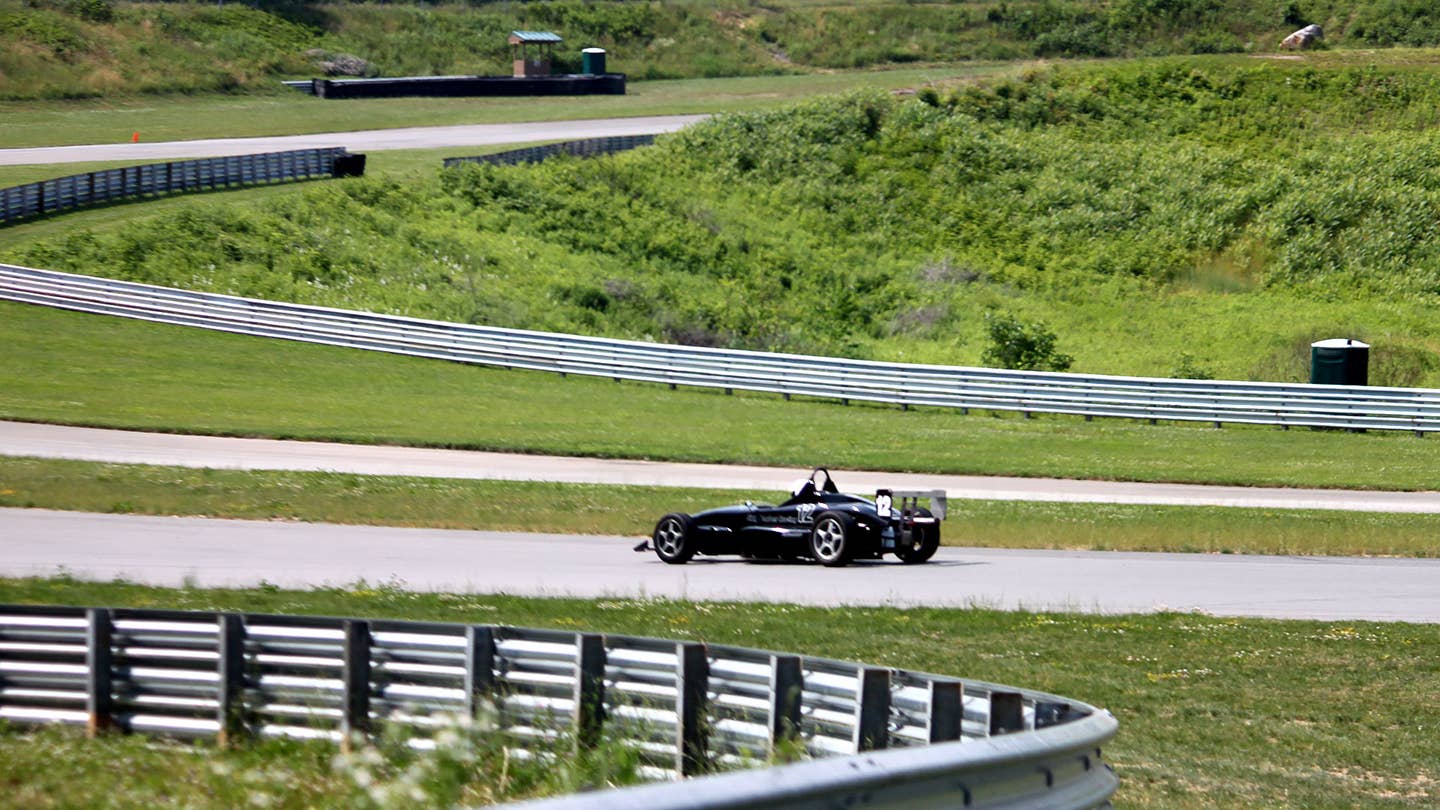 People tend to think that driving skill is inherited, a gift from fire-suited gods named Fangio, Mario, or Senna. But like Glenn Gould on piano or Curry firing three-pointers, driving mastery is mostly a matter of practice. Obsessive, dedicated practice. Sure, some drivers seem like born naturals. But even a Max Verstappen, history’s youngest F1 winner, son of former F1 driver Jos Verstappen, can credit nurture as much as nature: karting from age four, with sky’s-the-limit access to tracks, cars, and professional instruction.

That’s how champions are made, and Skip Barber Racing School has made a ton. John “Skip” Barber, a retired racing champ and Harvard grad, founded his school in 1975 with a pair of borrowed Formula Fords and four students. Four decades later, Skippy’s barnstorming instructors unravel the mysteries of speed for thousands of students a year, with alumni ranging from Jeff Gordon, Juan Pablo Montoya, Helio Castroneves, and Alexander Rossi to Paul Newman and Patrick Dempsey.

It had been a decade since I last sat in a Skip Barber Formula 2000 car, a tube-frame, fiberglass-bodied, open-wheel racer with a nearly indestructible 2.0-liter Dodge engine. But here I was, tearing around Pittsburgh International Race Complex—formerly known as Beaver Run—during Barber’s two-day advanced racing school. It’s my stepping stone to a full competition license for this year’s Rolex Reunion at Mazda Raceway Laguna Seca, a bucket-list vintage drive in BMW’s classic M1 supercar.

Whatever your skill level, there’s always more to learn about going fast. And as with any sport, some of the most obvious fundamentals are precisely the things you need to keep working on. With a hat tip to my amazing, ass-hauling instructors, here are five things I learned at Skip Barber Racing School.

It’s easy to spot a certain type of first-timer on track. The guy who kicks ass on Forza, suggests he’s going to show the instructors a thing or two, and proceeds to spin off on the first lap. Invariably, the noob is sawing the wheel, stomping the pedals, and shifting like it’s a strongman contest. Instructor Davina Galica calls it the biggest mistake for beginning students: “Drivers try to go too fast, too soon, without learning the line.” Easy there, bro: smooth inputs are critical. “Slow in, fast out” is the rubric for any corner, not the other way around. Get the car settled under braking before you start to turn. Never jump off the brake or throttle all at once. Ease off brakes as you dial in steering, then roll back onto throttle as you unwind the wheel at the exit, all in one fluid motion. Momentum is the key; maintain it, keep the car balanced and flowing, and you’ll be flying around the track in no time.

Street or track, it’s easy to get hypnotized by the view directly beyond the nose of your car, like the braking points, apexes, and exits you’re trying to nail on a road course. But your eyes need to be constantly up, scanning far ahead to the next turn, even if it means swiveling your head. In the mantra repeated by Barber’s Steve DeBrecht and every other instructor, “Look where you want to go,” and your hands and the car will almost magically follow. In the same vein, if you’re losing control and lock eyes on a looming guardrail or ditch—rather than an escape route—it’s almost guaranteed you’ll hit exactly that.

When speeds climb and adrenaline is spiking, it’s easy to tense up and basically forget to breathe. It’s one of my most frustrating tendencies on track: Shallow breathing, reliably followed by a death grip on the wheel, which racing legend Hurley Haywood once sought to cure by slapping my hands from his shotgun seat. (Thanks, coach). It’s like an anxious golfer who strangles the club, only the stakes are quite a bit higher. Breathe normally, relax those hands, arms, and upper body, and driving fast becomes much easier.

The bull-in-china-shop approach is no way to win a race. As DeBrecht says, “Having a superior engine builder is how I made 99.9 percent of my passes.” In other words, get your passing done on straightaways whenever possible. Where it’s not, patiently engineering a pass on curves is critical: better to lay back, preserve momentum, and slingshot past than ride a leader’s bumper and leave no room to maneuver. In the same way, front-running drivers who duke it out too soon may find the field catching up, and quick. It’s often better to form an alliance and put distance between followers, then save the mortal combat for the appropriate time: “We can settle this like gentlemen later,” DeBrecht says with a wink.

Never too Young, or Old

One of my favorite things about racing schools is the crazy cross-section of students, with little in common but the need for speed. The youngest student in my class was 15-year-old Amy Hollowell, a double World Karting Association national champion from Indiana who’s been racing since age five. Hollowell dreams of driving in IndyCar or Formula 1, with a backup plan to study engineering. “But I think it’s more fun to race than to be an engineer,” she says. “I just love to be at the track and feel the rush.”

The oldest was Brian Miller, a 71-year-old who happens to own the same car as me, a 1993 twin-turbo Mazda RX-7. Instructor Davina Galica is also 71, a three-time British Olympian and Alpine skier who set a downhill speed record of 125 mph—at age 50. Galica didn’t drive her first race until her late twenties, a celebrity event that led to a career in Formula cars, sports cars, and trucks, including podiums in the old British Shellsport Championship and a few qualifying bids in F1, sharing a track with Niki Lauda, Mario Andretti, and James Hunt. “I had stopped skiing and was running a ski shop in London,” Galica says. “But I’m a competitor, and motor racing gave me that outlet.”

The point? If your own competitive juices are flowing, it’s never too late to give racing a shot.