I Spent A Decade Restoring My High School Ride: A 1997 GMC Sierra

I wrecked my first car when I was 17. Then I spent 10 years slowly putting it back together, and now it’s finally done. 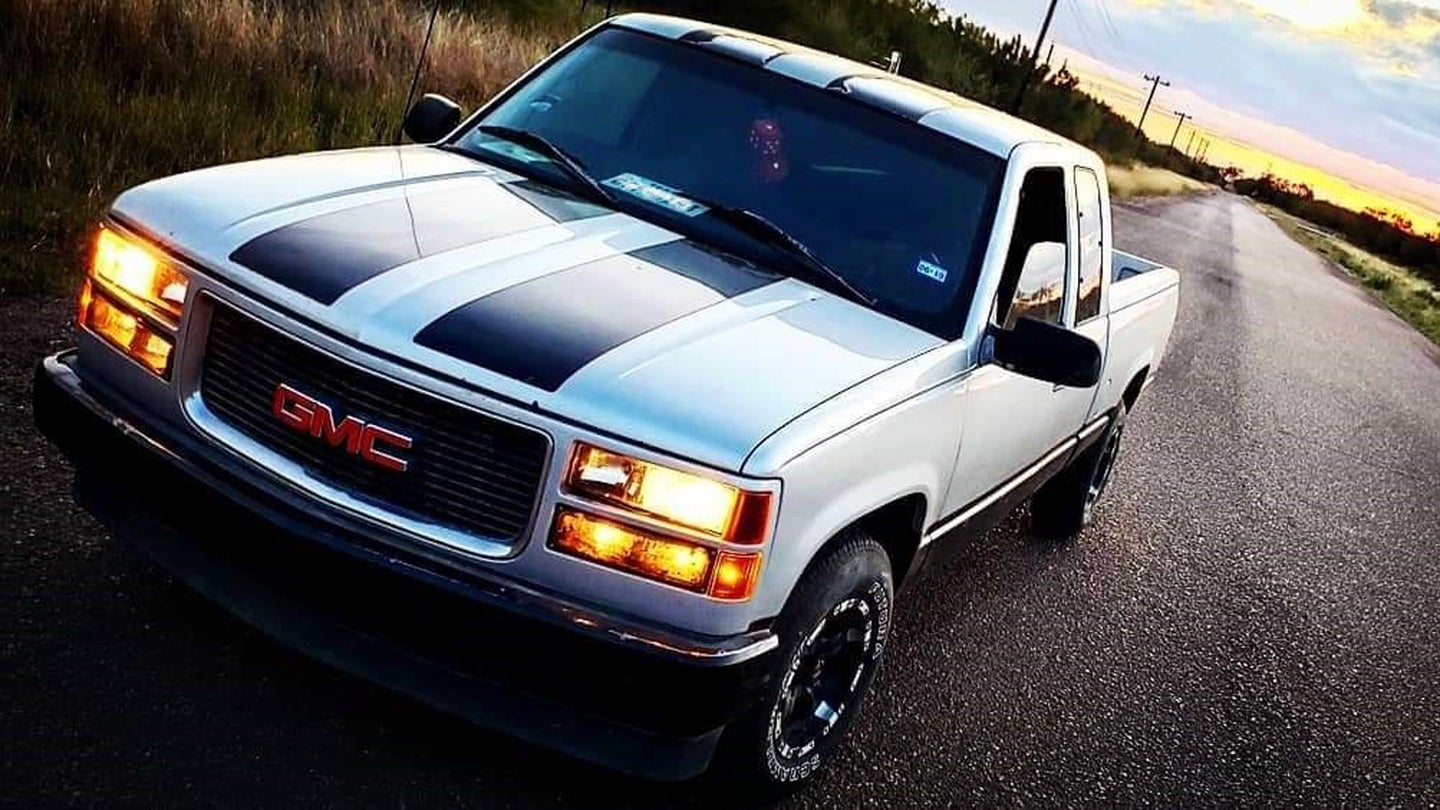 This is the first article I’m writing for The Drive. What better way to introduce myself to you, the reader, than by talking about my four-wheeled pride and joy? In this case, it’s a 1997 GMC Sierra 1500 extended cab. I’ve owned this truck since I was 16. It was my first car. And over the 12 years of ownership, I’ve spent 10 of those years fixing it.

In 2010, at age 17, while in route to my high school graduation ceremony I spun out and totaled it. I bent the frame when I kissed I-35’s concrete wall NASCAR style. The main reason why I bothered fixing it at all, rather than leaving it at a salvage yard, was the simple fact that the engine was still running—sort of.

Over the last decade, I’ve been slowly trying to restore this truck back to like-new condition. While the chassis was straight the engine, transmission, suspension and brakes all had issues from the accident. It was a daily driver that sometimes turned into a project car waiting for the next paycheck. Student loans paid to straighten the frame. A few months after this accident I was hit by a company vehicle, so whiplash paid for the racing stripes. (Big shout out to Oscar’s Garage in Laredo, Texas for doing all the hard work on this restoration over the years.)

Last year I had to replace the transmission when the original one finally blew up. This year I emptied my savings to rebuild the original Vortec V8. Everything on this truck has been worked on except the seats. I stopped keeping track of how much money I’ve sunk into this old truck, but I’m pretty sure it’s in boat owner territory by now.

If nothing else this truck proves how stubborn I can be, or that I have the ability to commit. Depending on how you look at it.

Anyone who still owns their high school ride, or any vehicle for longer than five years, understands the sentiment. It’s no longer just a car or truck. It’s your Christine, your KITT, your Ferrari 308 GTS. People associate the car with you. Your soul gets embedded in the upholstery. You hear phrases like, “You’re still driving that thing?” “When are you going to get a new car?” or my favorite, “Okay I’ll be right there.” Then the truck leaves me stranded on the side of the highway—again.

This truck has lived a hard life at the hands of an automotive writer who really just wanted to be a race car driver. Restoring the original engine was my way of apologizing to this beast of burden for everything I put it through. I’ll drop an LS3 next time.

A rebuilt engine means I’ve cleared the search history on 189,000 miles of hooning. It’s a new old truck. Driving it gives me a sense of nostalgic pride like trying on a high school letterman jacket 10 years later and finding out that it still fits—buttons and all.

A 1997 GMC Sierra is nothing special. It’s not an SS 454 or Syclone. So why have I spent so much time and money restoring a basic truck back to its semi-original glory? First off, there's the simple fact that I was able to walk away from hitting a wall at highway speeds. Airbags and seat belts pulled their weight, but a big part of it was this truck’s steel frame. It didn’t feel right to just leave it in a salvage yard and move on after saving me. I wanted to repay the favor and make up for my mistake.

Second, this truck has everything I want in a vehicle. A smooth ride, nice V8 rumble, a hood you can slam shut, one-finger steering, and a bench seat. Finally, I just like it. I consider it a very handsome design. I turn back and admire it after I park it somewhere.

It’s served a purpose far greater than just being transportation. It’s taught me to be a better driver and an amateur mechanic. I love this old truck.

Like I said, 2020 also marks the 10th anniversary of my high school graduation. Everyone else in my 2010 class was busy counting their kids, or lack of, searching for old flames on Facebook, and fearing the big three-o birthday.

The only thing I’ve been thinking about this year was getting my high school ride fixed. Now that’s done there is only one thing to do: put miles on it. I hear Canada is nice.