Horsepower is how fast you hit the wall, torque is how far you move it. 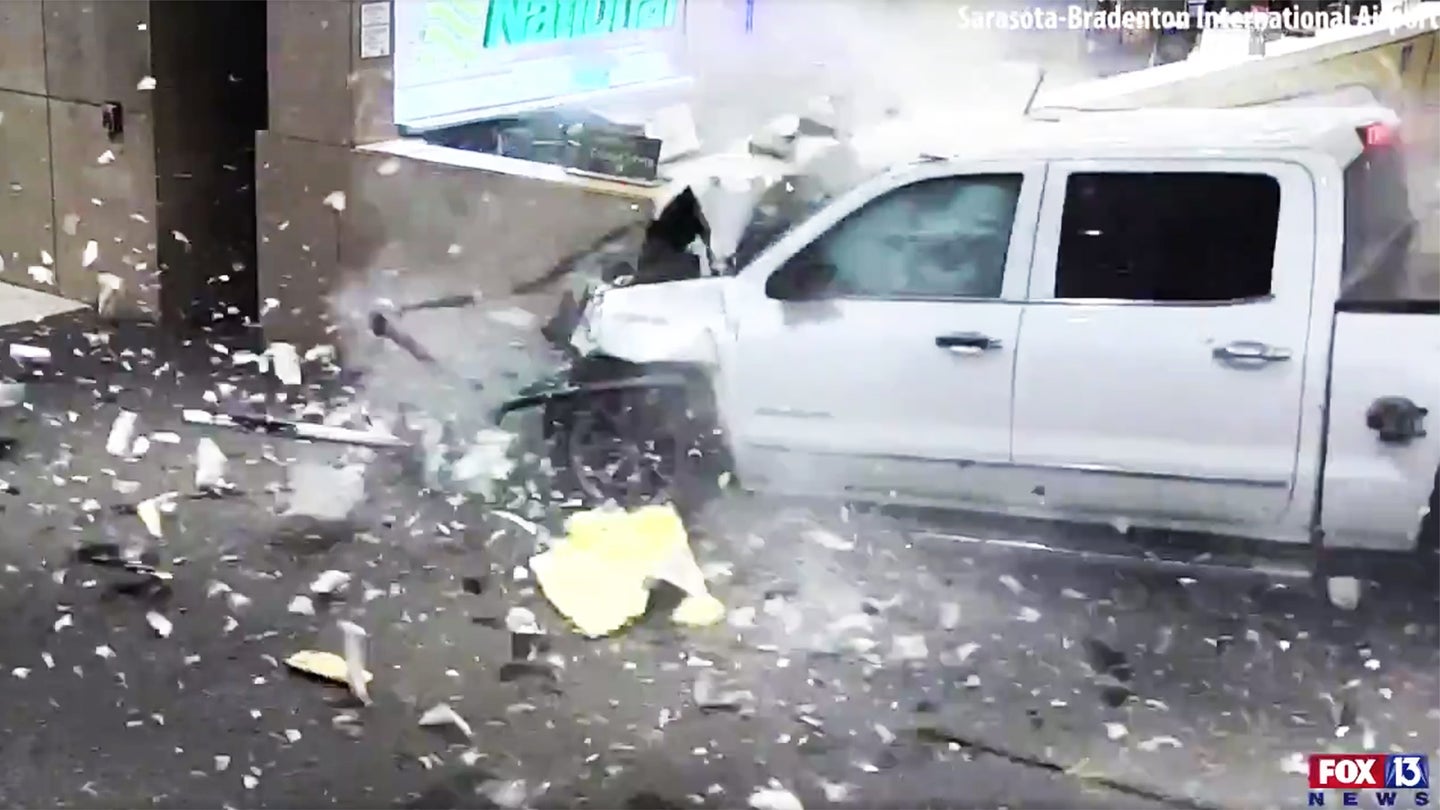 The driver of a previous-generation GMC Sierra 1500 was involved in a nasty accident that saw the half-ton pickup truck blast into the Sarasota-Bradenton International Airport at a high rate of speed. Despite the violent impact, no fatalities were reported but the driver of the truck is in serious condition at Sarasota Memorial Hospital, according to the Florida Highway Patrol.

A report by FOX13 claims that the crash happened Thursday around 2:51 a.m. in the baggage claim area of the terminal, when the white Sierra crashed through a wall separating the airport runway and the baggage claim area. Video captured by the airport's security cameras uploaded to the network's Facebook page shows the truck driving at a high rate of speed on the runway before crashing head-on into the wall and continuing its trajectory inside the terminal until being brought to a halt by a car-rental counter.

Due to the time of day that the crash took place, the airport grounds were relatively empty. However,  Fredrick Piccolo, president and chief executive officer of the airport claims that ground crews were servicing one late-night flight at the moment of the crash, which explains why there were two people working behind the counters seen on the video. By the looks of it, the employees were alerted by the massive boom the truck generated when crashing into the wall and had time to hide behind their counters and hope for the best.

"We actually had a late flight, but no one else was here in the baggage claim area except a couple of workers," Piccolo explained to FOX 13. "If this happened during the day, it would've been a much different story."

If you're wondering how exactly a civilian truck found itself speeding down an airport runway, so is the local police department. Security footage shows the same Sierra traveling north on U.S. Highway 41 moments before impacting a chainlink fence and making its way onto the FAA-controlled tarmac. The truck didn't appear to slow down prior to its first crash with the fence and the same applies for its collision with the second wall, leading authorities to believe that the driver wasn't conscious or aware of his surroundings at the time of the crash.

The driver was later identified as 40-year-old Juan Monsivis of Bradenton, Florida, but local authorities have not been able to question him to uncover what exactly took place last night given his current medical conditions.

Pucker factor was, reportedly, off the charts.