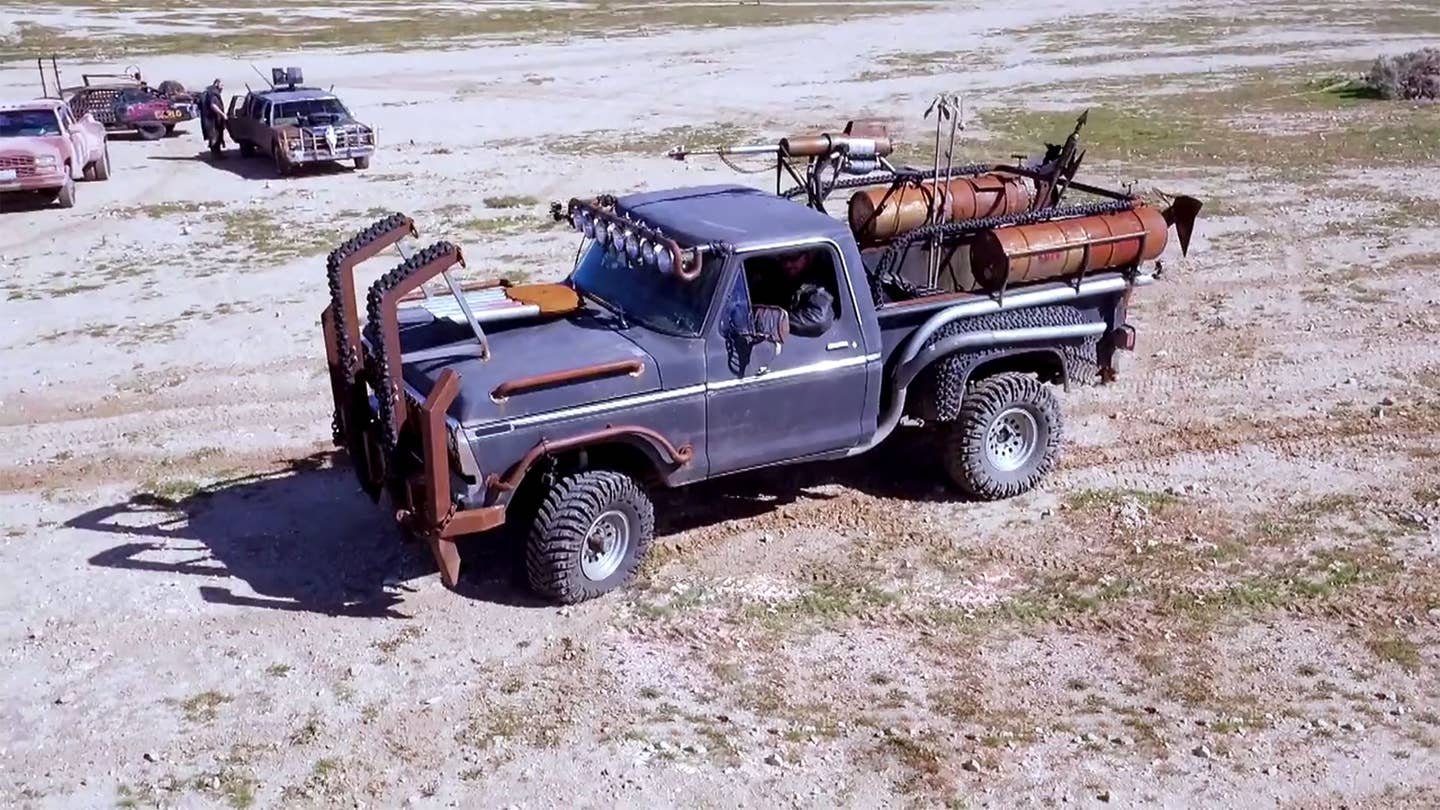 Our favorite denim-sheathed host dives into all things anarchistic on the most recent installment of Jay Leno’s Garage. There’s a visit to a dystopian wasteland where all cars emulate Mad Max’s amalgamated chariots, some motorcycle sidecar racing, a little monster trucking and a magnificent Thirties-era Bentley aero car, powered by a fighter plane engine. Below, tidbits and nuggets we found particularly interesting from the episode.

Some of the rustbuckets at the Wasteland Weekend are proper sleepers. For die-hard fans of Mad Maxwho are handy with a wrench, welding rig and an engine, the Wasteland Weekend is your Mecca. Think of it like a Burning Man for DIYers with a fetish for overpowered vehicles of yesteryear. About 150 custom cars, trucks and even the occasional 1989 Lincoln Town Car limo gather in the Mojave Desert to party and play. Like the movie, a good ride should be a pre-computer marque, preferably a diesel and the more weapons the better. Leno tests out the “Harpoon Truck,” a 1977 Ford F-150 Ranger, with a 429 racing motor that’s pushing 600 horsepower. With plenty of low-end grunt, the thing absolutely shreds. It won first place the first year it was presented.

The sidecar was born out of a newspaper contest. Back in 1893, a French newspaper put out a call for entries for the best way to carry a passenger on a bicycle. Zut alors.

The human counterweight for motorcycle sidecar racing is called “the monkey.” Fitting, since he or she has to hang off the chassis in any possible position required to keep all three wheels of the rig on the ground at all times. Leno, who’s never tried moto sidecar racing, gets his entrée via his shop foreman, Bernard Juchli, a world champion sidecar racer. Leno commands a 707-pound custom rig with a 165 horsepower Suzuki GSXR 1000 motor, doing well on his own, before following Juchli’s line to find out how to really excel in the corners.

Monster trucks are tricky to steer, due to a separate, hydraulic rear wheel steering system. Leno gets behind the wheel of Survivor to see how the whopper handles. Powered by a 540-cubic inch, supercharged Dart V8 that provides 1,700 horsepower, the 10,500-pound machine handles the bumps and jumps thanks to 26-inch nitrogen shocks. (The gas has better pressure retention and heats far slower than air.) The rear wheels, all 1,800 pounds of them, are steered via a hydraulic system, controlled by a switch in the cab. Leno struggles to get the oppo-steering down and goes off a jump a wee bit crooked, but presumably it’s hard to get the gist of driving a rig like that.

Leno’s 1930 Bentley Aero car will do 160 miles an hour. And it has no seat belts. “Not that you want to strapped into this thing when it goes over,” he quips. The 5,600-pound chassis – a P2 Rolls-Royce – holds a V12 Merlin engine. That same 27-liter engine was used in the 1944 P51 Mustang fighter plane. Leno notes that each cylinder is roughly equivalent to one contemporary Toyota engine, and the whopper cranks out 800 ponies. Behind that delightful rope-covered wooden tiller, Leno rips it down a runway and it sounds like they’ve just dubbed some plane audio over the shot. Give us the chance to drive that high-torque, screaming beast, Mr. Leno. Pretty please?