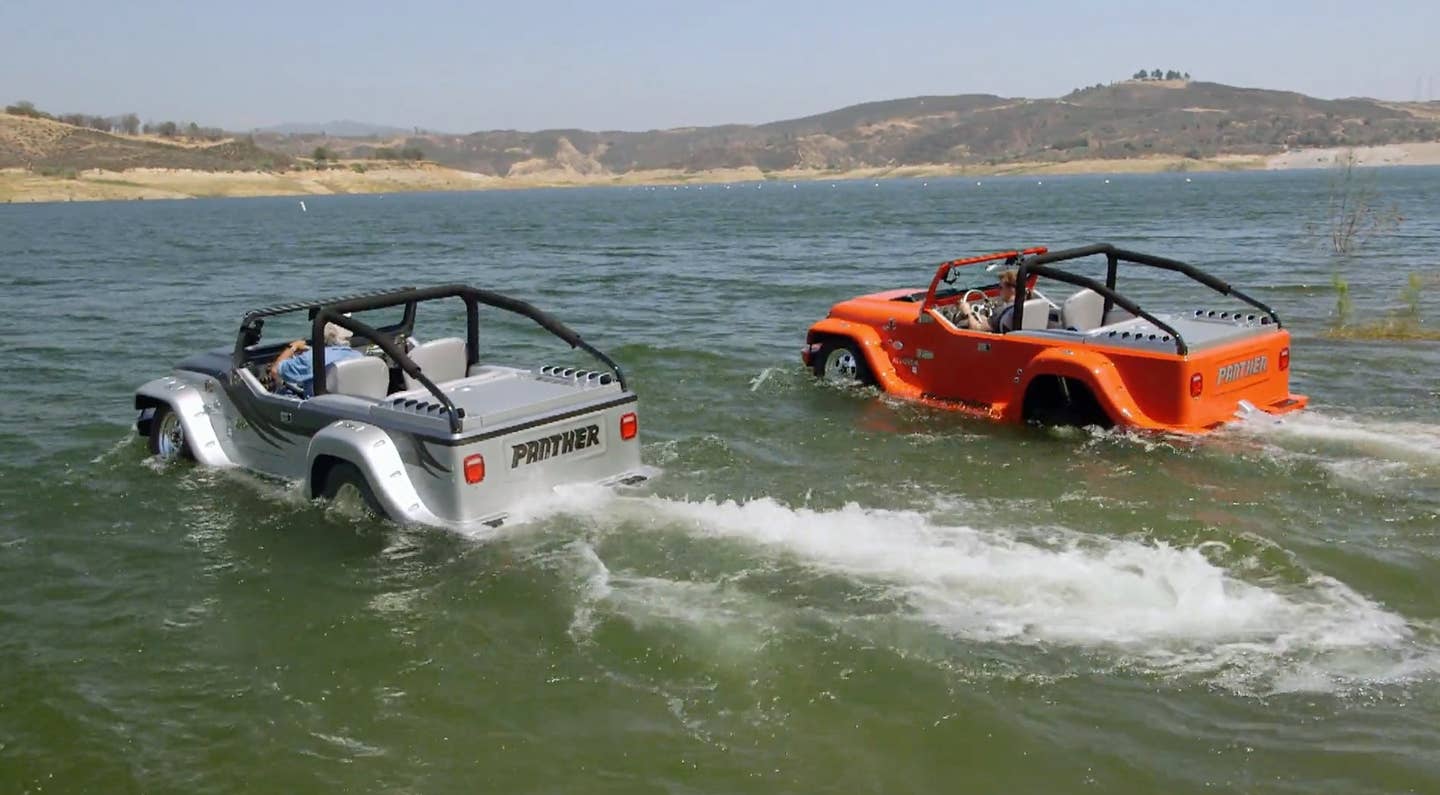 The theme for last night’s Jay Leno’s Garage was exploring the intersection of cars and water. Jay Leno says it best: “People say oil and water don’t mix, but they do,” before tackling everything from amphibious vehicles, steam powered machines, water-powered fuel cell technology, even cars styled after boats, like the 1916 Crane-Simplex Holbrook Skiff Leno captains during the opening segment. We talked to a producer from Jay Leno’s Garage to bring you behind the scenes of the episode, with tales from the sets when the cameras weren’t rolling. Ready?

There were safety concerns when shooting the WaterCar race with Jeff Dunham.

Last season, Leno raced puppeteer and car nut Jeff Dunham in a duo of woefully underpowered and slower-than-molasses Amphicars. For the rematch this time around, California manufacturer WaterCar brought two Panther vehicles to zip across Castaic Lake. The $155,000 Jeep-styled cars are the fastest amphibious vehicles in the world, cranking up to 45 miles an hour on the water, powered by a 3.7L Honda engine good for about 300 horsepower. “When WaterCar came, they had an even more powerful version on a trailer,” a producer told The Drive. “We looked at it and said no thanks because we were worried that would be too much.”

The speed of the WaterCars was intense.

“There was no prep before they raced,” the producer said. “What you see during the show was pretty accurate, where the WaterCar owner is trying to explain things and Jay and Jeff ignore him and just drive into the water. A few minutes later, they’re really hauling. It may not translate on TV, but those Panthers are ungodly quick. There’s a moment during the race where Jeff cuts Jay off and we all held our breath, but it worked out fine.”

The U.S. Navy hovercraft segment was years in the making, though it was originally supposed to be with the SEALs.

“Jay loves military stuff, and we’d been in talks with the Navy for years for a SEAL segment,” said the producer. “We wanted to do something with an MRAP the SEALs use. The Navy ran it up the flagpole and ultimately passed because the SEALs had a little too much exposure after the Bin Laden raid and some ex-SEALs writing books and the like. But the Navy did want to work with us, so they essentially handed us a menu of equipment they would allow us to shoot with and I picked the LCAC hovercraft.”

Leno trying the LCAC simulator was a “nightmare.”

“Jay didn’t do well with the simulator,” the producer chuckled. “They gave him twenty minutes to try and dock inside the landing ship virtually and it was a nightmare. The hovercraft spins on a pivot when you direct the jets and Jay just couldn’t get the hang of it. He’s sitting there and spinning and it’s not going well. In fairness, it’s hard because you’re not getting real-world feedback from looking out the window or any tactile sensations.” That’s not the first simulator to best our bedenimed host. “Jay did miserably when the San Francisco fire department put him their simulator before driving the hook-and-ladder truck last season. He was running through buildings left and right,” the producer said. “But when it comes to actually driving or piloting something, he does just fine.”

Leno really gets to steer the hovercraft on the open water.

The LCAC, or Landing Craft Air Cushion, hovercraft is 87-feet long, weighs 18 tons, has four engines harnessing 20,000 horsepower, burns 36,000 pounds of fuel in five hours and will do 80 miles an hour. And the Navy let Leno actually steer the $41 million monster. “They didn’t let him control the acceleration, though,” said the producer.

The crew was asked not to shoot classified screens on the ship.

“After we got the hovercraft into the docking ship, we visited the bridge with Jay and the cameras,” said the producer. “None of that made the episode, but we’re up there and the Navy asked us not to film certain screens with classified data and information on them. We obviously turned the cameras away, but they still scrambled around a little to erase some big boards of information.”

Filming an active military hovercraft was a deafening endeavor.

“We’ve got GoPros all over the thing, and after we landed inside the ship, we had to make sure they all had worked and captured the ride,” said the producer. “Even inside the ship, the hovercraft’s massive engines are still running and those fans are blowing hard, and you can’t hear anything. The crew is screaming at the top of our lungs and we still can barely communicate — and we’ve got earbuds in for our walkie-talkies.”

When shooting Italian carpenter Livio de Marchi’s wooden Ferrari F50 boat, owned by Ripley’s Believe It or Not, the producers were blown away by the painstaking commitment to realism. The pine boat car, which weighs 600 less than its road-going counterpart, took five months to carve. “All the detail are accurate,” said the producer. “You get in and look at the zipper behind the headrest, where the targa top comes off, and you can see individual teeth from the zipper, all hand-carved. It was nuts.”

Mostly because the vehicle didn’t want to cooperate. The back half of the machine is a steam-powered pumper, previously hooked up to a team of horses, though when the equines were no longer employed, a front-drive combustion engine took over. “This was the hardest segment we’ve done,” said the producer. “The firetruck is owned by the Burbank Muster Association, which is a group of firefighters who have heirloom pieces, but this isn’t a well-funded trust. They’re scrapping everything together on a shoestring budget, so the engine needed a little work. At midnight before our 7 A.M. shoot, a pin sheared in the engine and it was undrivable. I spent most of the night calling all the crew and people involved and moving the shoot back by a day so we could get the thing running.”

The fire truck ran only for an hour before exploding.

“We do finally get it running, and we get it to the site of the shoot. Transporting it was a whole thing, too, because it weighs several tons so you can’t just tow it. It needed a lowboy truck. We get it there, fire it up, test it and we’re all good. Our guest, Andy Swift, was an expert in old fire trucks — incidentally he’s the father of one of our producers — and he’s driving it up the hill so we can get in place to film and then the engine just blows. I’m talking a massive basketball-sized hole in the engine, right through the crankcase. We have too much committed to the segment to stop, so we have to salvage this somehow.”

A pickup was used to tow the fire truck for several key scenes.

When Leno is driving the truck down a hill, “that’s just gravity-powered,” laughed the producer. “For the front-on shots when Jay’s driving at the camera, we’re just towing it. Obviously, we wanted it to run and it did, for a short time, but stuff like this does happen with 100-year-old machines. It was a bummer but the steam pump in the back still worked, so we thought we’d just move on to focus on that.”

The steam pump also broke, turning the pumper into a ticking time bomb.

“Andy Swift had tested the pump and it was working fine before the shoot,” said the producer. “We ran the line into the pond and started to film the steaming process. I’m shooting with Jay and Andy, asking Andy to repeat a line here and there when Andy suddenly stops talking. Turns out the water had drained out of the pump and was going back into the pond due to a check valve failure. That’s a big problem because eventually this could literally explode like a giant pipe bomb. Andy caught the problem and started emptying the fire box to get it cooled down in a hurry. A huge credit to Andy for that.

Leno is kindly paying to have the truck fixed.

“Jay wanted to make everything right, so he’s personally funding the repair process,” said the producer.

Leno broke a bit off the Nissan Winter Warrior.

Look carefully at the final film, when Leno’s barelling around a snow-covered mountain in a stock Nissan Murano fitted with enormous heavy-duty tracks, and you’ll see a bit of side trim from a wheel well fly off when he slams through a snowman. “That car was made as a one-off, to look cool on a showroom floor. But Nissan was incredibly cool and said we could actually drive it. The problem is the clearance between the body and tracks wasn’t great and any amount of flex would cause the body to drag on the tracks. But Nissan didn’t mind when we returned it missing a bit of body.”