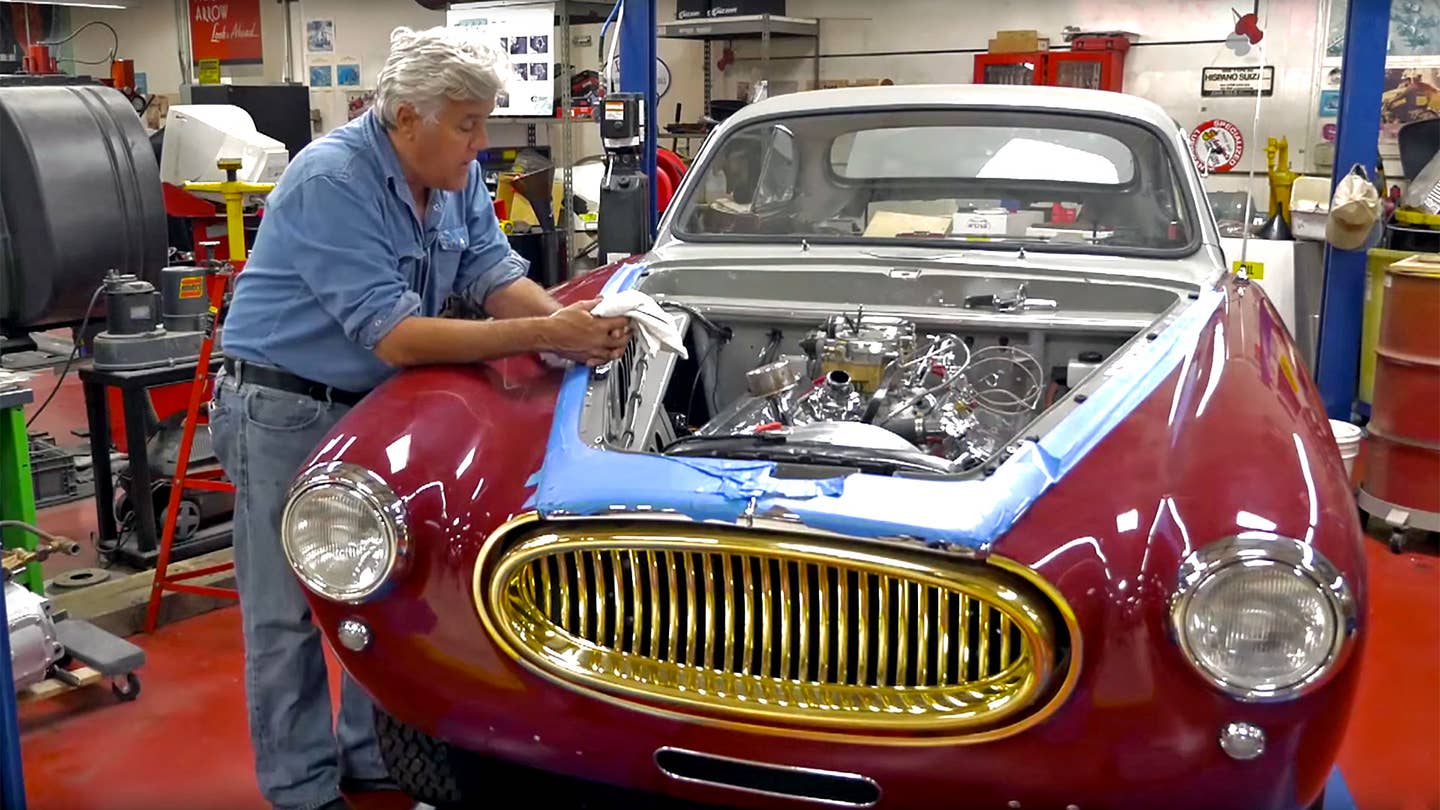 This week, Jay Leno skipped his usual deep dive into a single vehicle to walk us through a number of his current restorations. He’s got a diverse bunch of cars in the works, all in varying stages of completion, all cool. Here, a cursory glance at what he and his crew are wrenching on.

This beauty was found after being garaged since 1968. The body was in good condition, with no damage—a relief, since the fenders are welded directly to the frame and would be a bear to fix. The grill’s been redone and is now ready for re-plating, and the engine—a 331 Chrysler Hemi—is back in. That’s stock, which Leno was keen on keeping, though he did delete the original two-speed semi-automatic transmission and it’s “awful” clutch in favor of a reliable Tremec. Last time they popped it on the dyno, it put up about 300 horsepower. Jay expects to be driving soon.

Leno scooped up this brown beauty from a Beverly Hills condo garage, where it sat for a two decades. Since it was underground, the Porsche is rust-free, despite having over 100,000 on the odometer. Leno says there’s no need to touch the paint job, as it looks great after buffing. The interior needs love, though, so Leno is working with Stoddard, an Ohio outfit specializing in classic Porsche parts.

Leno’s currently putting disc brakes on the front of his humungous Imperial. (When the car weighs 5,000 pounds, you need adequate stopping power.) The comic also owns a ‘67 Imperial, and both Detroit boats were sourced from the same Hollywood producer. Clark Gable and Frank Sinatra allegedly drove this ‘58, though Leno’s hasn't found the photos yet.

This Rolls is coming along swimmingly, and we can’t wait to see and hear that Merlin V12 eventually roar to life. (Aviation buffs will recall that prodigious engine was also employed in the Spitfire.) The dash is done, with the shower spark starter twirling nicely. They’ve included a 55-gallon gas tank, which should hold just enough fuel to power that 1,000 horsepower engine for... what, 12 miles?

Leno was gifted this cute coupe from a little old lady who was tired of it deteriorating on her property. While the paint needs serious help, there’s no body damage. Pristine condition shouldn't be too difficult to hit. This will ultimately be a gift for Leno’s wife, who loves the plucky look of the Nash. “This is a classic Leno project. Take a car worth nothing, put 20 or 30 grand into it and then it’s worth 12.5,” he chuckles.

When they’re done, one of the original EVs will have Tesla levels of power, thanks to a modern electric motor swap. The lithium ion batteries came from a Nissan Leaf and they’re also dropping in plenty of other contemporary comforts, such as air conditioning, bluetooth and satellite radio. We really want to watch Leno drag race a Model S in this 1914 sleeper.

He was given the final year Pontiac Firebird WS6 for driving one at the Daytona 500.