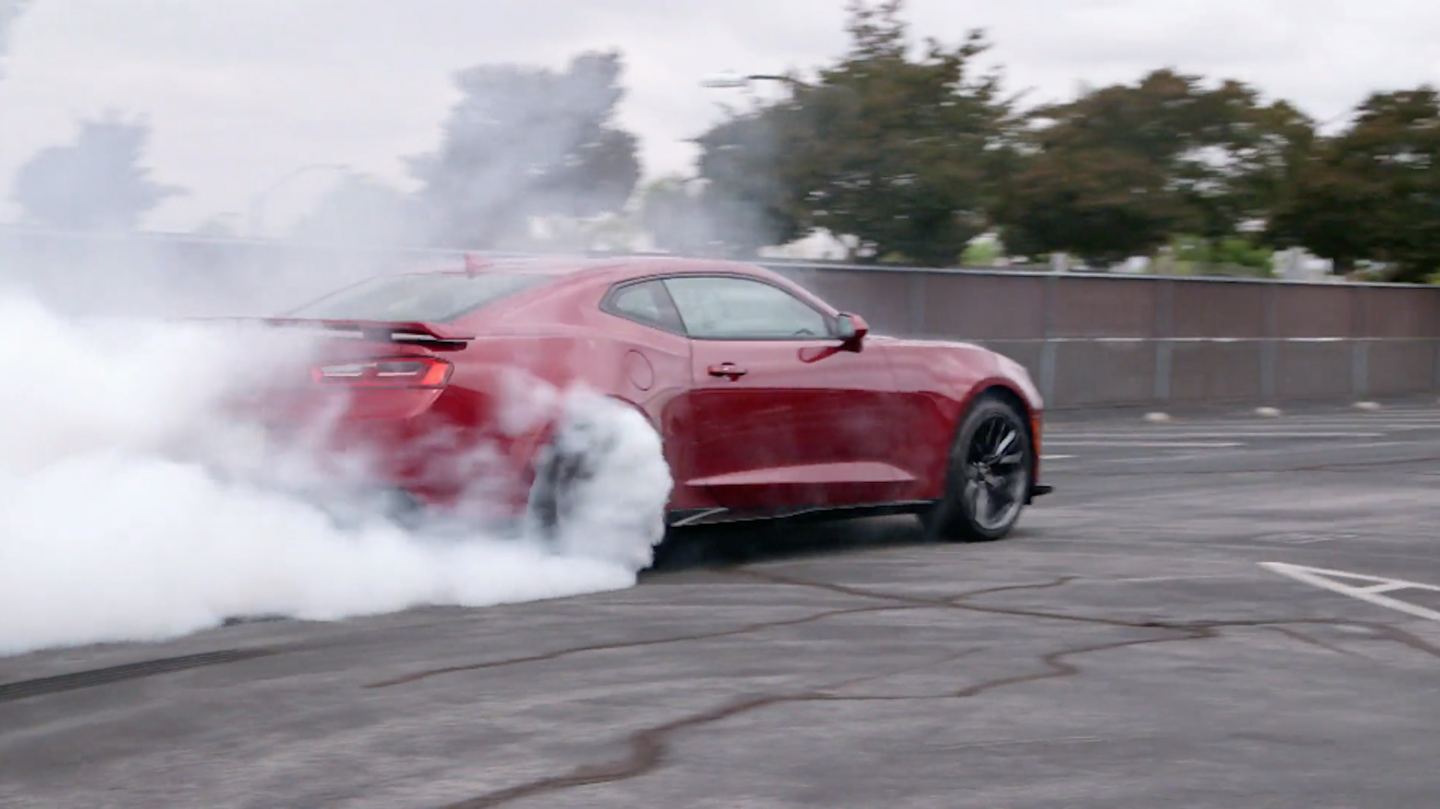 Last night on Jay Leno’s Garage, the theme was musicians and cars. The sonically gifted and the automotive world have historically often intertwined, Leno points out from behind the wheel of his cherry red 1962 Chevrolet Corvette. This very beauty, our host says, always makes him fondly think of Prince. Tonight’s episode sees a fair amount of famous musical faces, a bunch of gorgeous sheet metal and also the worst car Jay Leno has ever driven. We chatted with Jay Leno’s Garage producers again to bring you tales from beyond what you saw on TV. Ready?

Hagar’s garage is overflowing with plenty of exotic treats. Among them, there’s a 2005 Ford GT, a 2008 Ferrari 599 GTB Fiorano F1, a 2005 Aston Martin Vanquish Lagonda, a 1967 Gateway GCM-R Fastback Mustang – with a Roush 511 RFE crate motor, tweaked up to 700-horsepower – that Hagar calls “pretty un-driveable,” and the only white Ferrari LaFerrari in existence.

When Leno met Hagar, Leno scolded him for revving an engine.

While checking out Hagar’s 1974 Jaguar XKE Roadster, Hagar recalls that he was once at a famous Hollywood mechanic’s shop and was revving the 5.3-liter V12 when Leno came over and yelled, “Hey Sammy! Let it warm up, man. You’re gonna blow it up!” The rocker chuckles and says, “And I thought, ‘Wow. Jay Leno is yelling at me.’”

“I was just home from a tour,” Hagar shares, “And the Ferrari is being tuned at the shop. Eddie had just brought his Lamborghini in and asked whose Ferrari it was. They told him it was mine and suggested he call me, because David Lee Roth had just left the band two days prior. Eddie goes into the office and calls me right then and there, saying ‘Come down to the shop and let’s talk.’ I did and we ended up jamming and two days later, I’m in Van Halen.”

“The guy’s got great cars,” a producer tells The Drive. “We all loved that 512, with that great 5.0-liter, 12-cylinder boxer. The sound of that flat-12 engine was just incredible. We knew Sammy is a car guy, and we weren’t having the easiest time getting musicians booked for this episode, but his name came up and I said we should call. Jay had his personal cell phone, so we called and Sammy said he would do the show within minutes. When we book a guest and a car, there’s a lot of complicated paperwork that no one gets right on the first try. Sammy did. And he did it within an hour. We were floored. This never happens. Then he offered us his hotel, then helped us get catering for the shoot from a place he knew. It was incredible.”

Driving his 512 with Leno, Hagar says, “I try to sing like [sports cars] sound. With my guitar sound, I strive to get my strings to sound like a 6-carb Ferrari Daytona at 7000 rpm.” That elated the producers. “We were freaking out because Sammy hit our theme so well,” the producer told The Drive. “Often we’re trying to make sure our episode theme is very clear and it all comes together, otherwise we’re just talking about random cars. Along comes Sammy with this slam dunk.”

That tidbit came out during the drive. “We thought recreating the video would be a great way to end the segment,” said the producer. “Otherwise, it’s a boring handshake goodbye. So we asked the police escorts for the shoot if they wouldn’t mind ‘pulling over’ Sammy and arresting him and letting Jay leave. Those cops were so great. The officer nailed it one take.”

“We usually have to shoot a guest’s car for longer than we need the guest on-set,” the producer shared. “The celebrity almost always leaves for that, because we’re just doing still shots of the car and some b-roll. Sammy stuck around to shoot the shit, which was awesome. He was just like one of the guys, except his stories were from his touring days and they were incredible,” laughs the producer. “Sammy was one of my favorite guests we’ve ever shot with.”

Commissioned in the Sixties by Vox, a guitar and amp manufacturer, this one-off came from the King of Customs George Barris and features a Ford Cobra engine (likely the small block) and a Ford tranny. Leno notes that you can plug up to 32 guitars into the machine and play them, and the organ in the back does work. “We got this from Jeff Dunham who is a great friend of the show,” the producer said. “Jeff told us he does drive it occasionally. Our only regret is not having one of the musical guests plug into and play for us.”

The country star brings his 2012 Prevost tour bus by Leno’s garage to show off the ‘Vette-inspired monster. Specifically, it’s modeled after the 1958 C1. Paisley, who loves Corvettes, reveals that his first was a 1995 C5. “Corvettes are the most iconic American automobile. When you come back from war, you should be given a Corvette,” the singer tells Leno.

The producers couldn’t give Paisley a Corvette to drive, however.

“If you watch next week, you’ll see a brand new Grand Sport Corvette,” said the producer. “We couldn’t use it in two episodes, so we got Brad the 2017 Chevy Camaro ZL1.” That features the same supercharged LT4 6.2-liter V8 from the Z06 ‘Vette, and the same 650 horsepower and equal pound-feet of torque and the glorious line lock feature, A.K.A. “burn out mode.”

Paisley had some trouble burning out, but it wasn’t all his fault.

For the shoot, the Camaro ZL1 had come directly from the Detroit Auto Show, nearly one year ago, and the line lock feature had yet to be fully ironed out. Paisley gets in and Leno instructs him on how to get in the right set up, then he floors it but forgets to put it in gear. There’s a big laugh after Leno calls him out for the error, and (seemingly) on the second try, all goes well, the tires shred and smoke and there’s an epic burnout. “It didn’t go quite that smoothly,” the producer chuckled. “Between takes, an engineer from Chevrolet is in the car with a laptop trying to reconfigure the line lock settings to get them just right. We get to make Jay look like the expert, but this was a tricky one to shoot.” Still, Paisley’s face waiting for the first burnout that never comes is priceless.

The ZL1 is a sheer riot, per the producers who drove it.

At the time, they would’ve been some of the first people in the nation to give the ZL1 a whirl and the reports are good. Very good. “It’ll do 100 in second gear, no problem,” one gushed to us. “I’d tell you more but we’d all get in trouble with lawyers.”

Shepherd owns a 1972 Dodge Charge, a 2010 Challenger and a 1954 Ford Business Coupe, tweaked up to 450-horsepower, among others. Shepherd brought a 1964 Dodge Charger, custom built by Mopar with an aluminum block and aluminum heads, specifically built for drag racing, though he’s yet to see how quick it’ll scramble through a quarter.

The segment sees Shepherd blindfolded and put in three cars and asked to guess each. He passes, though he does get plenty of hints from Leno for the first two, a 1954 Dodge Wagon and a 1969 Lamborghini Espada. The third, a 1966 Dodge Coronet with a 426 Hemi – the very one Leno showed us during The Drive’s garage visit – Shepherd knows the instant he puts on the seat belt. Props.

The worst car Jay Leno has ever driven is Liberace’s Zimmer.

“This is a complete piece of shit,” Leno fumes to viewers from behind the wheel of Liberace’s Zimmer Golden Spirit. “This car is the equivalent of having a ‘kick me’ sign on your back. I’m surprised the horn doesn’t say, ‘Blow me,’” Leno says. “Take a mid-Eighties Ford Mustang, stretch the chassis, stick a bunch of ugly plastic on it and this is what you get. It’s slow, it’s ugly and there’s nothing of value to it.”

Leno did not want to shoot this segment. At all.

“This is easily one of my favorite pieces of film from the whole series,” the producer told us. “IT’s because Jay is being very real. We thought it would be funny to put in a Liberace costume, which of course he was legitimately pissed about. It took a lot of coaxing to get him to drive the car in the first place, so when I showed up with the outfit, he got super mad. He said there’s no humor in a white jacket and pink shirt. Ultimately, I agree, but what’s really funny is how angry he is while driving it, and I’m sure the costume helped that anger build. There’s one shot where Jay is tapping his foot and glares at the camera after I asked what he likes about the car and he snaps, ‘What do you want me to say? I don’t know. The ashtray is nice.’

“We shot that nearly a year ago and I was on the phone with Jay recently, having a deep reflective talk,” said the producer. “I was telling Jay how thankful I was that I have this job, that I’m able to do this for a living and work with him and what a real privilege that is. Jay pauses and goes, ‘Yeah, you do a good work...except for that Liberace thing.”