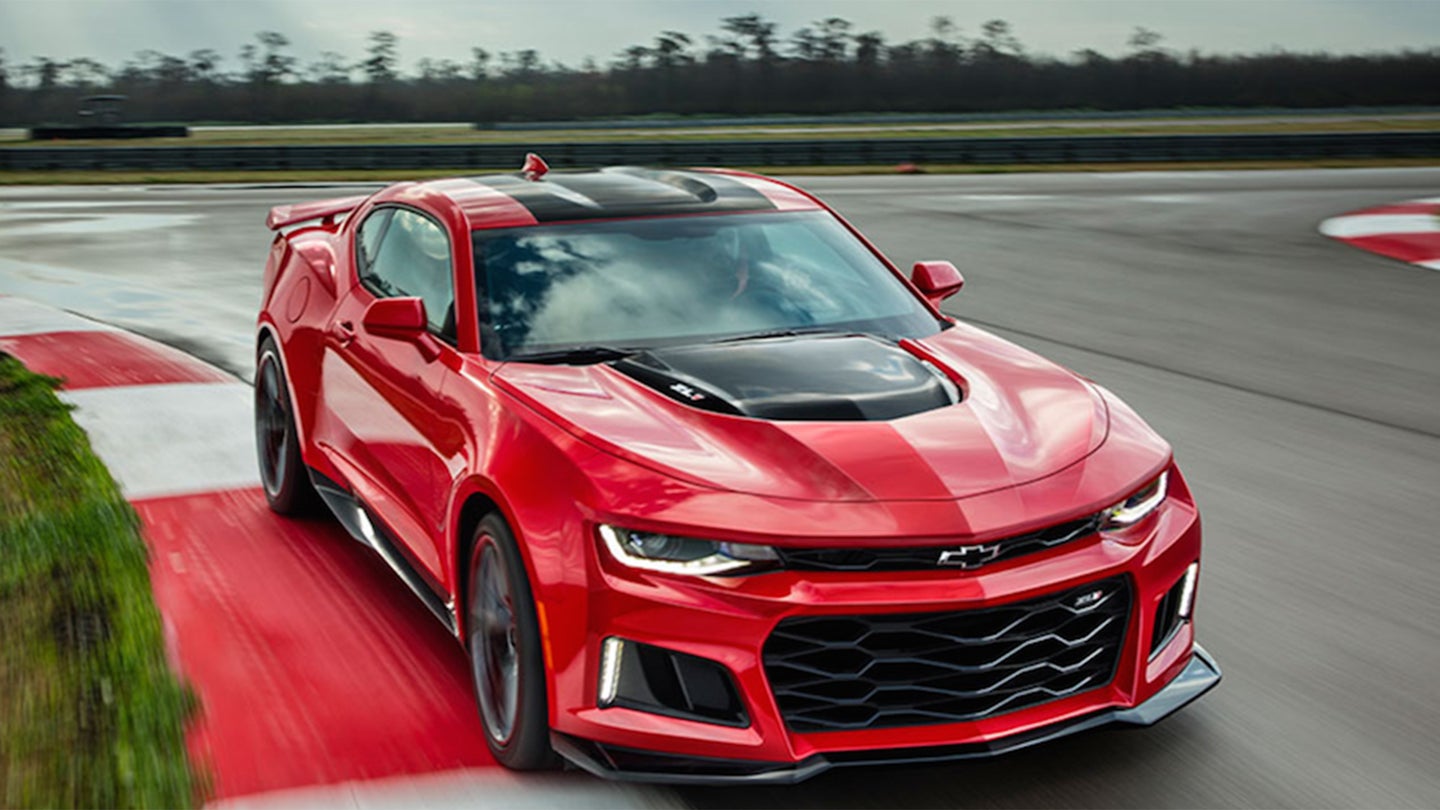 The Camaro performed its max-velocity runs last spring at Automotive Testing Papenberg in Germany, where the ZL1 logged its official 198-mph average while running laps in both directions on the 7.6-mile high-speed oval. That included a blistering 202.3 mph in the more wind-aided direction and 193.3 mph into the breeze. Al Oppenheiser, the Camaro’s chief engineer, says that Papenberg’s oval encompasses 2.5-mile-long straightaways with 49.7-degree banking on the top lane, which allowed Chevy test drivers to run flat out without lifting off throttle in turns.

“This test caps an impressive list of performance stats for the Camaro ZL1, which was designed to excel at everything,” Oppenheiser says. “It’s the most capable—and fastest—Camaro ever.”

Name your Chevy Camaro, they're all playing catch-up.

One runner-up, of course, would be the 2015 Camaro Z/28, the $75,000, 505-hp track day special whose spectacular performance came at the expense of everyday drivability, including its bone-grinding ride. The ZL1, in contrast, is designed as a relatively livable Camaro that can segue from the street to the track and back again. This plutonium-grade pony car is also markedly quicker than the previous-generation ZL1, which made 580 horsepower from a supercharged, 6.2-liter LSA V8. Sharing its slick GM Alpha platform with the Cadillac ATS and CTS, the 2017 ZL1 trims about 200 pounds from the previous version and ups the ante to 650 horses and 650 pound-feet of torque, with a growly shout-out to the supercharged 6.2-liter LT4 V8 from the Corvette Z06. More boast-worthy numbers: Stoplight to 60 mph in 3.5 seconds, an 11.4-second quarter-mile at 127 mph, 1.02 g’s of lateral acceleration and a stop from 60 mph in a scant 107 feet.

Chevy swears that the Camaro that made its 198-mph run was showroom stock, aside from an onboard data logger and mandatory safety equipment. That included its Goodyear Eagle F1 Supercar 3 tires, pumped up to 44 psi, the recommending setting for extended high-speed driving – the kind we might experience on our run from Charlotte to Daytona. Kidding.

Yet Oppenheiser says that the ZL1 was developed with those kind of speeds in mind, including aerodynamic tuning and hardware to reduce aero lift without unduly increasing drag. ZL1 features include a “stanchion” rear spoiler with wind-cheating advantages over a blade-type spoiler; and a auxiliary transmission oil cooler, patent pending, that quells front-end lift with no drag penalty. Front-to-rear balance was also specifically tuned for speeds that most owners will never have the opportunity to approach.

“In fact, when we set the front and rear camber adjustments to zero degrees and the tire pressures to the maximum allowable sidewall pressure, the ZL1 averaged over 200 mph,” Oppenheiser says.

Mopar fans may chime in here, noting that the Dodge Charger SRT Hellcat is still a touch quicker in the quarter-mile, at 11.2 seconds versus 11.4 for the ZL1. And, that the 707-hp Charger managed 204 mph on a two-way jaunt around the banked oval at Ohio’s Transportation Research Center.

Chevy fans can use this riposte: Even a “mere” 455-horsepower Camaro SS 1LE will whip any Hellcat on a race track or twisty road. So imagine how badly a ZL1—with an extra 195 horses versus the SS 1LE and more handling gumption—will torch the Hellcat in any race that contains a radius. The beatdown seems certain to extend to Ford as well, with even the spectacular Shelby GT350R likely giving up precious seconds on track to the faster and more-powerful ZL1. We’re dying to test that theory ourselves.

Ten speeds, but this ain't no Schwinn

Now on sale, the ZL1 coupe starts from $63,435 with the six-speed, rev-matching manual (including a $1,300 gas guzzler tax); or $65,830 with a 10-speed automatic, which includes a $2,100 guzzler penalty. Counterintuitively, the 10-speed automatic Camaro drinks more fuel than the six-speed manual version, at a federally rated 12/20 mpg in city and highway, versus the manual's 14/20 mpg. I plan to find out why on our trip to Daytona.

There’s also a stick-shift ZL1 convertible for $70,735, with the automatic convertible topping the lineup at $73,930, both including guzzler tax. That beefier droptop may not break the 200 mph barrier, but your heart and hair follicles will still get a vigorous workout.