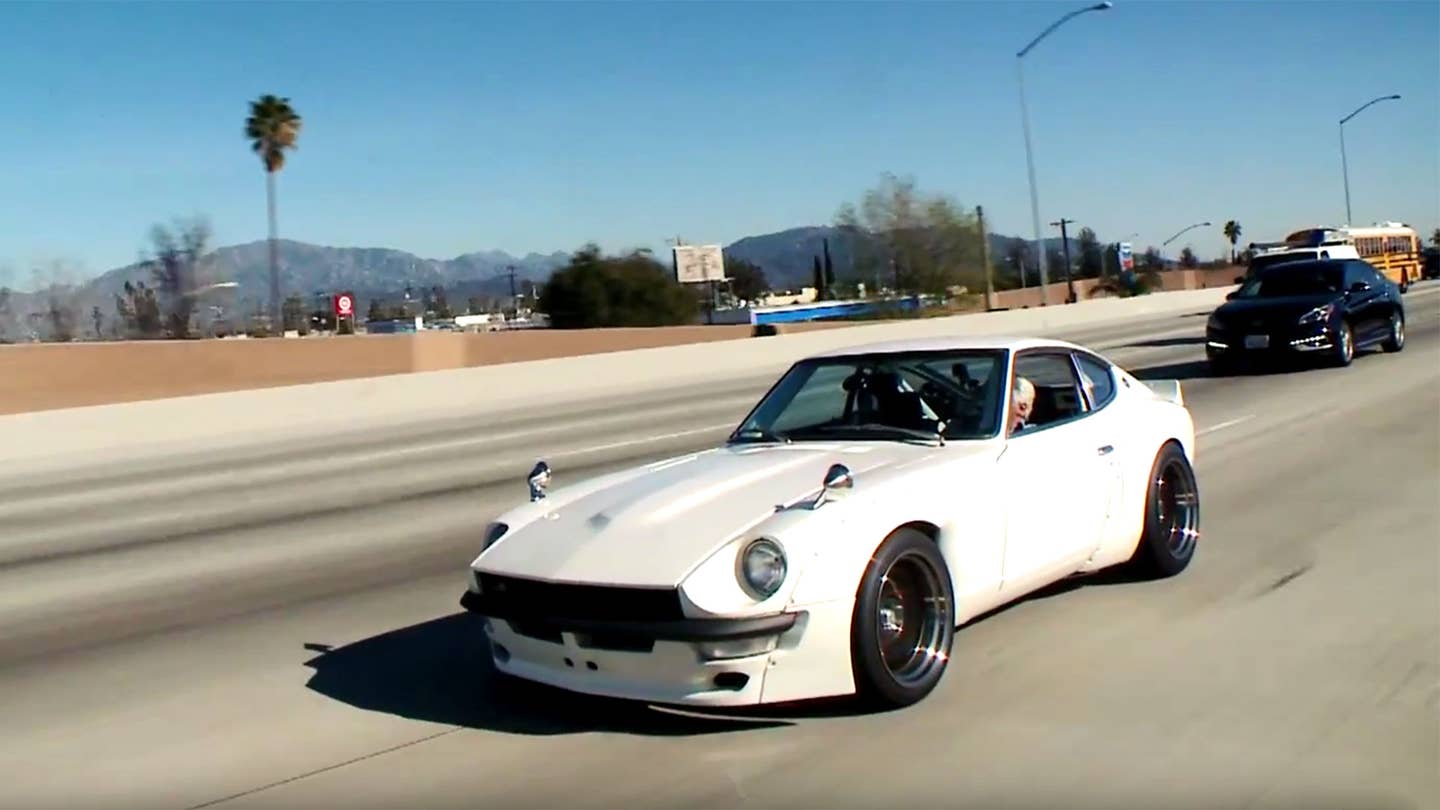 If you’re the kind of person who sees a 27-minute YouTube video and groans at the sheer length, allow us to help you navigate this week’s episode of Jay Leno’s Garage. Skip to 18:55, when the comic slips behind the wheel of this 1973 Datsun 240Z and the only glorious sound is the throaty howl of the naturally-aspirated 2.6-liter inline-6. Listening to the Datsun trumpeting through the gears will induce euphoria and leave you craving more crescendos.

The powerplant producing such pleasing notes is a Nissan RB26, plucked from a 1994 Skyline GTR. The twin-turbos normally affixed to that prodigious engine have been deleted to result in that gravelly, sexy voice. It growls like proper muscle—fitting, since the great feat of engineering that is the 240Z was the closest thing Japan created as a reaction to the Ford Mustang, Leno says. The man responsible for this clean and loud coupe is actor Sung Kang, most recognizable from his turns in Fast and the Furious films.

Kang explains that even before he had driven a 240Z he always had a “chemical reaction to seeing the beautiful lines” of the body, and longed to own one. His chance came after finding a copper-colored model on Craigslist, garaged for 13 years. Still drivable in stock form, Kang considered keeping it factory correct—but only briefly. “I like to respect original designs, and I shy away from the body kit revolution, but there’s something about this kit that drew me in,” he tells Leno, adding, “It’s like taking a hot Japanese girl and putting her on a steak and chicken diet and making her do squats.” A befuddled Leno has no clue what the hell Kang means by that (we're not sure we do, either) but the kit does look great.

After stripping the Datsun down to the frame and adding a roll cage as a precursor of track days to come, Kang added fender flares to accommodate bigger shoes. He found his dream kit on the web but it was no longer in production; a plea for help, issued via social media, saw GReddy Performance from Irvine, CA, reach out after recognizing the design as a Rocket Bunny kit fabricated in Japan. They helped secure one and Kang again harnessed the Internet hive for the interior. The factory-issue plastic dashes are renowned for cracking, and Kang wanted something more durable. A firm in Dubai offered to redo everything in Alcantara and leather, returning a unique and elegant console. Kang was thrilled.

Inside the car, all non-essentials including insulation, the air conditioner, and the heater were removed. Under the bonnet, the original 2.4-liter I-6 was scrapped. At birth, the 151 ponies produced by the 240 was more than ample, but adding horsepower is an endeavor everyone should undertake. The installation of the newer RB26 was done so well, Leno chirps, that it almost looks stock. The custom HiTech headers draw praise, as do the revamped pistons, cam and individual throttle bodies. Kang says that it was a challenge to squeeze out more power after removing the twin puffers, but they managed to do so. When dynoed, it was putting 245HP to the rear wheels with its RB25 5-speed transmission. (The RB26 tranny was all-wheel-drive; Kang wasn’t interested in that.)

Careful attention was paid to keep the bulk of the beast true to its origins. The fender mirrors are OEM, procured from Amazon Japan, and the pristine paint is also factory original, code number 904: Kilimanjaro White. All the symbols were cleaned though they left the patina on the original steering wheel column. Included among the upgraded bits are the brakes, from Wilwood. They’re in need of some adjusting, not yet track-friendly, Kang admits. The hardest part of the project was the more than 60 hours that went into the stitch welds.

On the back, just under the spoiler, Kang and crew added a logo reading “FuguZ.” Fugu is short for the highly-poisonous Torafugu, or tiger blowfish, a delicacy in Japanese cuisine. “If you don’t prepare it well, it can kill you. That’s a nice parallel to a track car like this,” Kang notes.

With that, it’s time for the sublime portion of the episode when the humans are silent and the car speaks for itself. It’s as riotous as a tank in the cockpit and Kang and Leno have to shout over the marvelous engine noise. Leno quips it’s better than a radio. Kang’s wife won’t set foot in the car because of the decibel level, even when cruising in fifth. Leno does agree that the brakes need some tweaking, but says it’s a peach to drive. As they close, Kang says he’s next looking to restore a 1974 Ford Maverick. Leno says it best: “I would stick with this Datsun.”