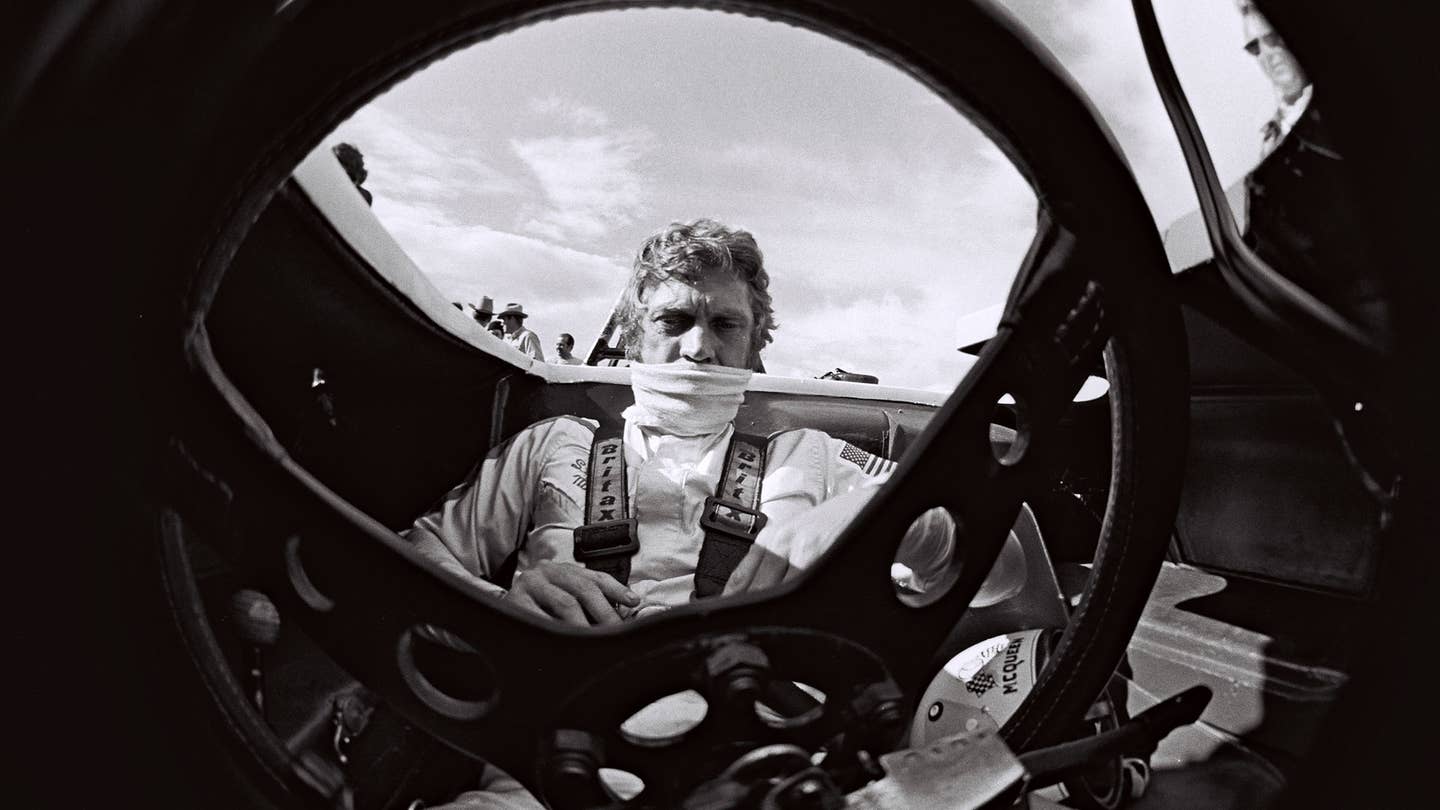 “When you’re racing, it’s life. Anything that happens before or after is just waiting.” –Steve McQueen

“Being an actor is a gas. Being a movie star is a pain in the ass.” –Steve McQueen

When Steve McQueen went to France before the 24 Hours of Le Mans endurance race, in 1970, he was one of Hollywood’s biggest stars, as well as a highly regarded racecar driver. Fresh off the success of Bullit and The Thomas Crown Affair, and a second place finish by his racing team at Sebring, he arrived in Monaco intending to drive the race, film it, and then recreate the experience using the same top drivers. He wanted a dramatic movie that would reflect the intense mechanical allure, emotional competition, and technical difficulty of the sport.

He formed a production company, recruited director John Sturges—who helped made his career with The Magnificent Seven and The Great Escape—and convinced the studios to write him a check for $6 million. He rented a nearby chateau for his wife, son and daughter. He oversaw the design of new fangled racecar-mounted camera rigs to immerse viewers in the racing experience at speed. The studio’s insurance company balked at sending its most bankable star into the meat grinder of a track, so he contracted Jonathan Williams to drive the camera car during competition. He shot for five weeks, and he was just getting started.

He didn’t have a script.

The resulting movie, Le Mans, contains some of the most incredible racing footage ever captured on film. It is beloved by racers, and racing fans, and the kind of people who geek out over transcendent Technicolor hues. But it was a critical and commercial flop. It was the moment when McQueen’s career peaked and crested.

“Up until that point he’d been hugely successful,” says Gabriel Clarke, co-director, with John McKenna, of a new documentary Steve McQueen: The Man & Le Mans, about the making of the film.

“He’d ridden his arc, and he was climbing. And after this film—I mean, it’s simplifying it a little bit, because he acted and made an awful lot of money in films like Papillon and The Towering Inferno, and The Getaway after this. But essentially he really retreated from Hollywood after this film, because it took so much out of him. He lost his company, he lost his wife, he lost close friends and colleagues in the industry. All as a result of the debacle that was Le Mans.”

McQueen evoked then, and still does, a certain strain of recalcitrant American masculinity.  “Basically, I come from the gutter and I’m not a compromiser,” he says in the documentary. Or, as his son Chad McQueen, an executive producer of the new film told us: “Since I was born I was on every picture he ever did. And once my dad made up his mind about which direction it would go or what he wanted to do, he would not back the fuck off for nothing.”

The filming of the movie thus became an epic battle of wills. McQueen had decided that he wanted to create something fiendishly true to the essential and beloved experience of driving. “Racing is pure,” he says in the documentary. “One of the few things in life you can’t fix.”

After months of production, another $1.5 million, and 1,000,000 feet of shot film, the studios were kind of expecting a Hollywood movie. You know, the type with characters, conflict, and some semblance of narrative structure. What McQueen delivered was a glorious looking, occasionally intense, somewhat confounded rumination on motorsport. “I don’t think there’s any racecar driver that could tell you why he races,” McQueen says in the documentary. “But he could show you.”

“Watching the film in it’s own right, I think it’s a confused film,” says documentary co-director McKenna of Le Mans. “I think as a film it starts in a very interesting way. It’s 35 minutes or so without any dialogue. And then a compromised story and plot comes along, and that then spends the rest of the film dancing with magnificent racing.”

The Man & Le Mans covers the tragic dissolution of McQueen’s first marriage. It does not shy away from revealing his philandering sexual compulsions. And it explicates his implicit and ongoing place within the zeitgeist. But its essential genius lies in the way in which it portrays the making of Le Mans as the external manifestation of McQueen’s internal struggle.

By glorifying McQueen’s uncompromised drive to make this ultimate racing movie, it exposes his combativeness, his monomania. Caught up in his fame and his passion, his love of the reality of racing interfered with his love of the artifice of acting.

“I think there’s an element of that tragic hero, the pride, that hubris, that was going to be his undoing,” Clarke says. “He was this guy who just flew too close to the sun. As one of the interviewees says in the film: ‘you know, he was Icarus, not Hercules.’”