Here's everything you need to know about Toyota's take on the Hummer H1. 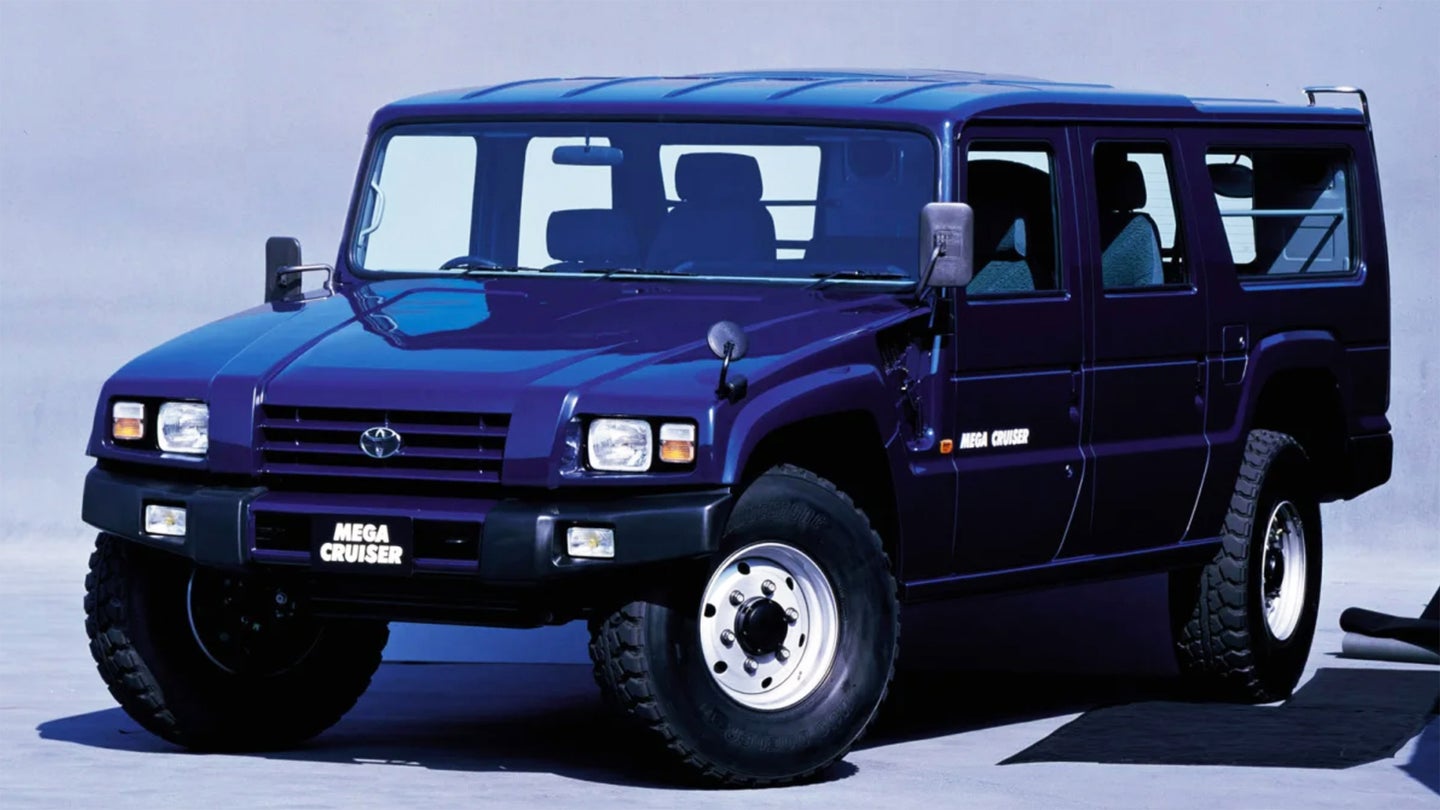 Every year, a fresh crop of cars and trucks never sold in the United States come of import-legal age thanks to our restrictive 25-year ban on new cars. In 2019, for example, the Porsche-built 1994 Audi RS2 Avant, the first Subaru WRX STi, and the McLaren F1 all became eligible to US buyers. 2020 will see another group of greatest hits from the 1990s join the fray, among them one of the most obscure off-road trucks ever built: The 1995 Toyota Mega Cruiser, Japan's answer to the Hummer H1. 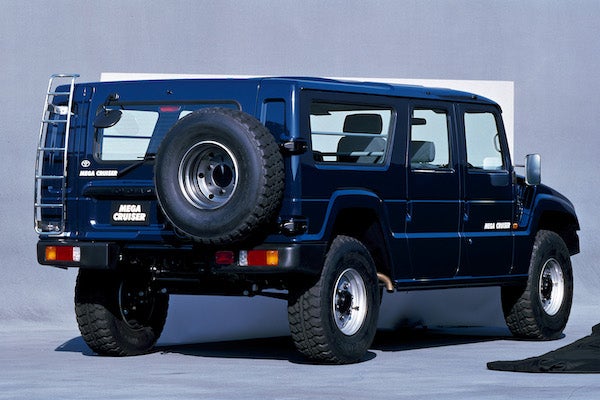 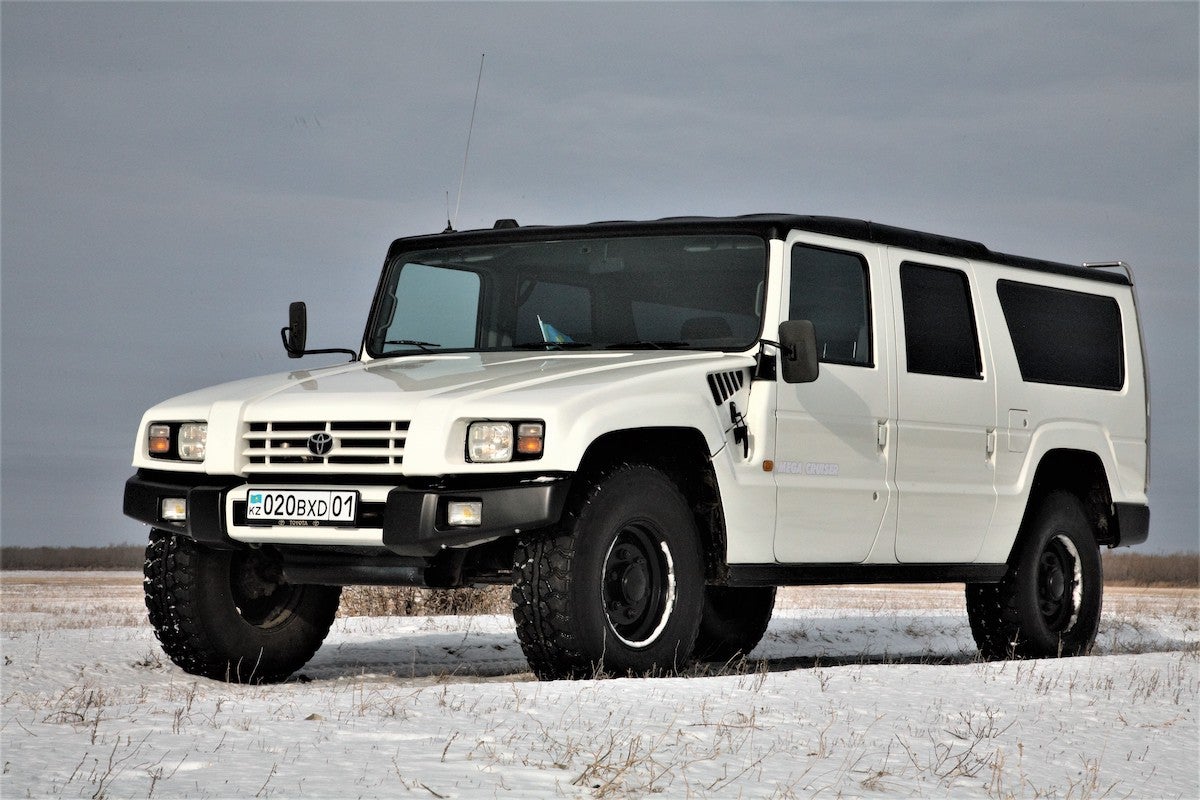 Judging the Mega Cruiser book by its AM General cover is fair; the original Hummer and the Toyota Mega Cruiser had about as much in common as two SUVs made for the same roles by different countries can. Both saw service in their respective countries' militaries before arriving on the consumer car market. Each were enormous, and the Mega Cruiser the bigger of the two: It's about seven inches taller than a Hummer H1, and sixteen longer, if about one inch narrower.

Despite those dimensions, Mega Cruisers offered surprisingly little seating, with space for two occupants up front and four in back. Instead of a third row, the Mega Cruiser had a huge, two meter-wide cargo area with a 1,323-pound load capacity, and a tailgate with foldaway steps—a feature still newsworthy in 2019. Interior amenities were as good as mid-'90s Toyotas got, with car phones, at least one screen in view of every occupant, and what looks like real leather and wood upholstery. The example pictured here is definitely optioned up—look at other models and you'll find more spartan accommodations. Mega Cruisers started at the modern equivalent of around $90,000. 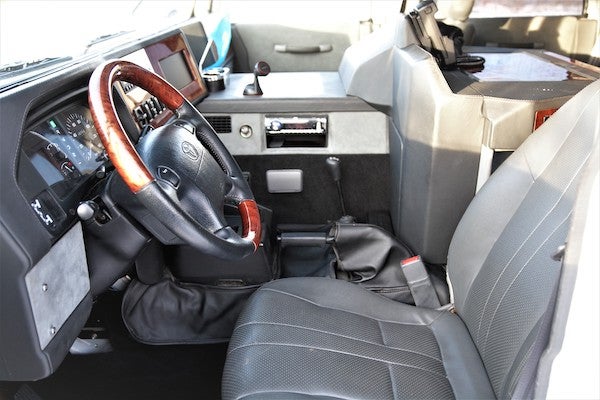 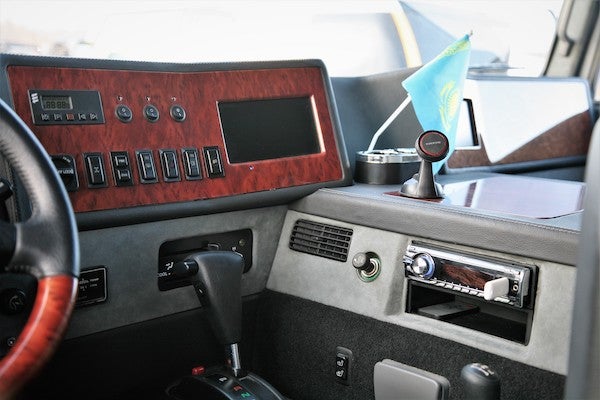 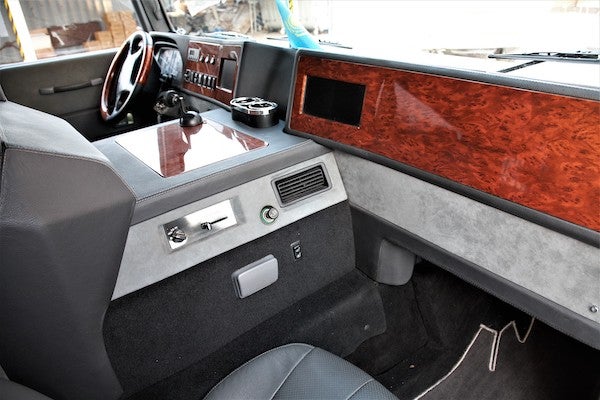 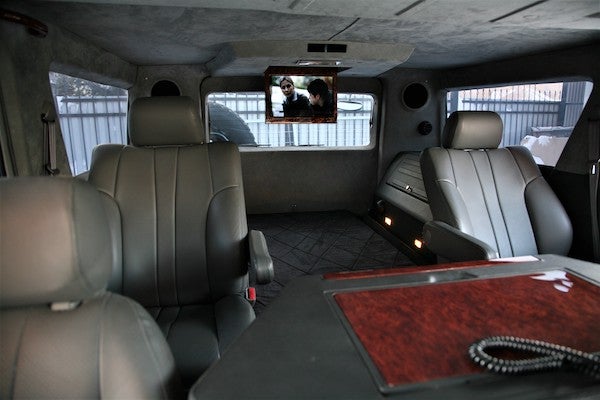 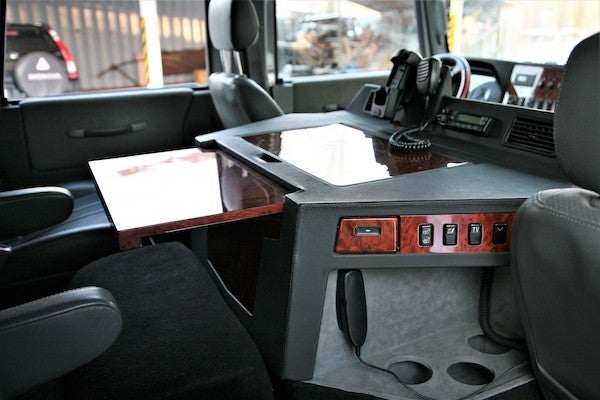 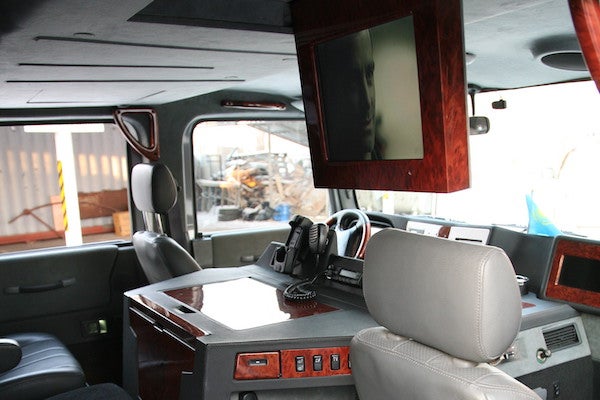 Toyota took another leaf from AM General's book by offering central tire pressure control as an option, but it wasn't done copying the Humvee's homework there. Inside its monstrous 37-inch tires, it too touted portal axles, giving it 10 millimeters more ground clearance than a Hummer H1—almost 17 inches in total, and nearly double what you get from a Jeep Wrangler. Suspension was double-wishbone all around, with a sway bar connecting the two front corners, and some degree of steering on all four. The Mega Cruiser's speed-sensitive power steering system could turn the rear wheels up to 12 degrees at full lock, giving it a turn radius of just 18.4 feet, some eight feet narrower than an H1, and almost five feet tighter than a 2020 Ram 1500 EcoDiesel.

Though rear-steer added to the Mega Cruiser's considerable, 6,283-pound curb weight, it was something of a necessity if the truck's chassis were to be as capable as its powertrain, which starts with a 4.1-liter, four-cylinder turbodiesel called the 15B-FT. Its 152 horsepower and 282 pound-feet of torque sound sinewy compared to the 1,000 pound-foot behemoths we have today, but the 15B was a respectable diesel for an automaker not known for them; it still made more power and torque per liter than Ford's contemporaneous 7.3-liter Powerstroke turbodiesel V8. 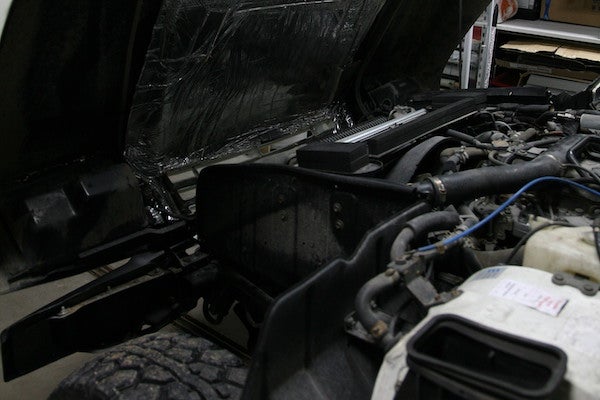 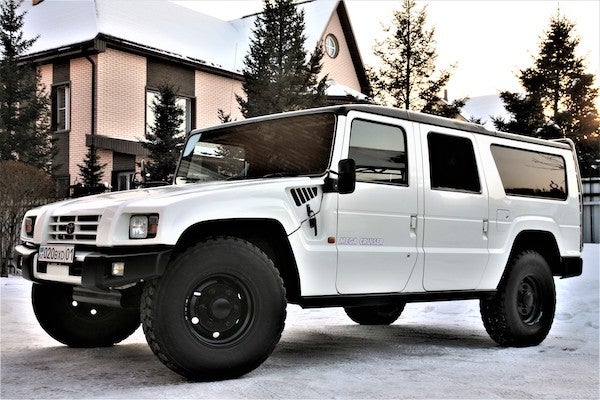 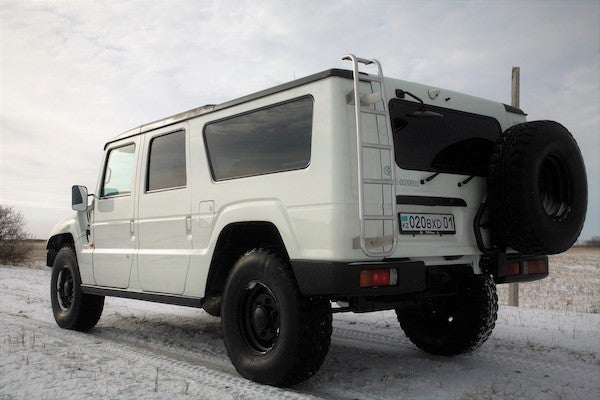 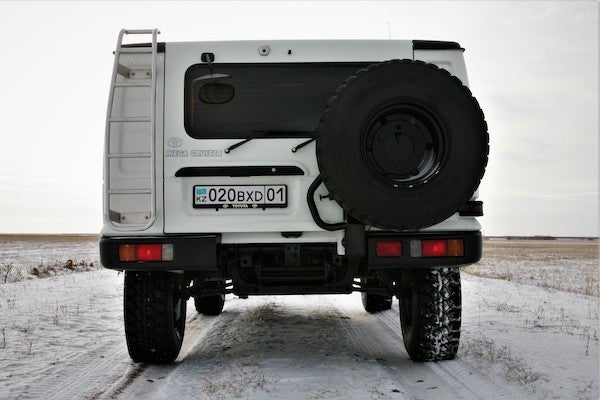 A four-speed Aisin-Warner automatic similar to those used in contemporary Land Cruisers sent power to a two-speed transfer case, which in turn forwarded the twist to a pair of locking mechanical differentials. This might sound like a recipe for daily trips to the gas station, but that's not so. Toyota promised about 22 mpg from a constant speed of 37 mph, so with the Mega Cruiser's 28.5-gallon tank, 600 miles on a fill-up was doable. What kind of mileage it'd do at American highway speeds isn't clear, though we know it can at least reach those speeds thanks to Australian blog Boss Hunting, which reports these bricks can hit at least 81 mph. 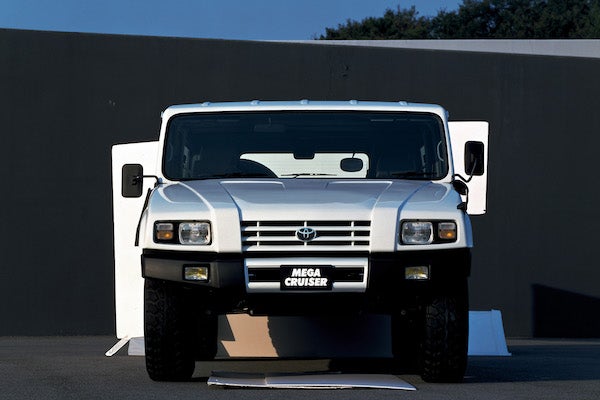 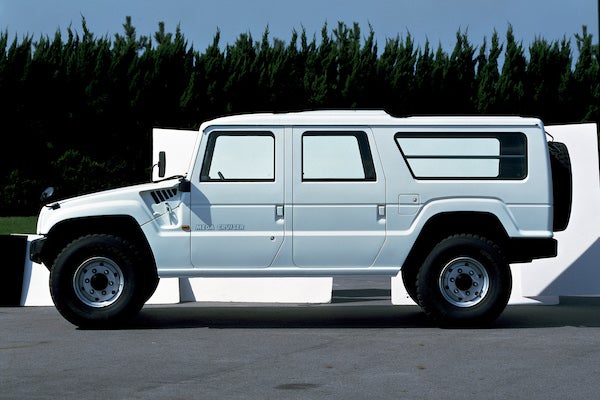 By now, you're probably wondering how you can get your hands on this Hummer-killer, but unfortunately, there are two things that stand in the way of you crashing your local Hummer meets with a Toyota. One's a question of rarity, as Toyota reportedly made only 3,000, only 133 of which were sold to civilians according to Toyota itself. (Fortunately, the fellow who supplied us with interior photos says he's selling his, so if you can read Cyrillic, haggling with him may be the way to go.) The other's a question of time, as vehicles have to be 25 years old to the day to be eligible for import. Mega Cruiser production didn't start until late 1995, so even if you track down an early model, you still won't be able to bring it stateside for about a year.

A watched pot never boils, but unwatched quarry always gets away. Let the search for the mintiest Mega Cruiser begin.