These modern classics are now legal on American roads. So what'll it be? 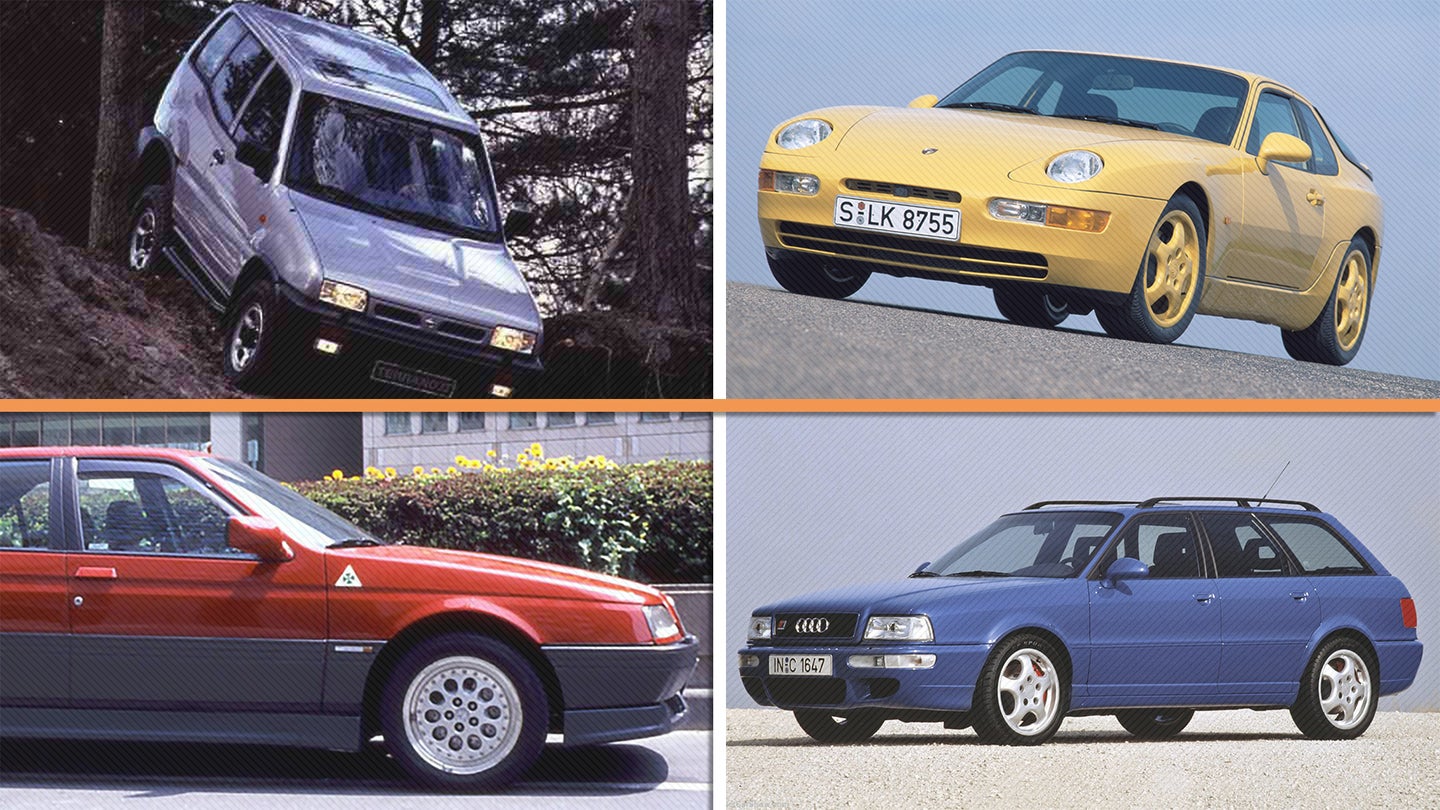 Ah, the New Year. Each January brings a blizzard of resolutions, a raft of new local laws to learn, and of course, a fresh crop of old foreign market cars that are finally legal to import under America's arcane 25-year law.

The Imported Vehicle Safety Compliance Act, which with few exceptions bans the import and registration of non-federalized cars newer than 25 years old, is rightly criticized for its arbitrary cutoff and strict mandate. But on the flip side, it's also served as a restrictor plate of sorts, suppressing the price of some key foreign-built modern classics by isolating them from the world's largest collector car market—a market that, by the way, happens to be newly obsessed with everything from the neon-washed 1990s.

European super wagons. Japanese rally masters. All manner of glorious machines from that era are now in play, their values sure to go up in the years ahead. But you, you're smart. You're reading this article, after all, and by the end, you'll be armed with all the knowledge you need to stay ahead of the rising curve.

To that point, know that the 25-year rule goes by the month of manufacture for a particular vehicle, so build dates matter. That also means there will be a crop of 1995 model year cars becoming eligible before the end of the year; to give as many cars their due as possible, we're sticking with '94 cars for now. Without further ado, here are the top 10 cars from 1994 that you can finally import and drive in these United States.

Audi's current lineup of RS performance models can trace their lineage directly to the 1994 Audi RS2 Avant, a blue battle wagon birthed in a brilliant collaboration between Audi and Porsche. Backed by a six-speed manual transmission, the RS2 Avant's 311-horsepower turbo-five engine can rocket the 3,500-pound wagon from 0-30 mph faster than a McLaren F1 on its way to an electronically limited top speed of 163 mph.

Under 3,000 RS2 Avants were built beginning in March 1994 at the same Porsche factory that made the legendary 959 and on the same line that was previously used to produce the crazy Mercedes-Benz 500E under contract from Daimler. Those numbers have already made it a pricey collector's item. Still, these are bound to grace America's crumbling roads in a few months time. Do you really want to be the only guy on the block without one?

In many ways the MGB RV8 is the polar opposite of the RS2 Avant—it's obscure, it's a V8 roadster, and it represents the dying gasp of a once-great car. But it's no less unique. You're probably familiar with the cheery MG MGB, the tiny British convertible that developed a strong stateside following before production ended in 1980. Less well-known is the car's resurrection in the early 1990s when parent company Rover Group saw how well the then-new Mazda MX-5 Miata was selling.

Rover brought the original MGB team out of retirement (seriously) to build its second act with newer materials and one key difference: a 3.9-liter, 190-horsepower V8 under the hood. The rest of it was a mash of new and old—modern independent suspension and disc brakes up front, leaf springs and drums out back—topped with a characterful leather-and-elm interior. It was never a competitive car. How could it be? But it was distinctly, wonderfully British, described in this modern review as not unlike a small Jaguar XJS.

Through a cloud of vape smoke emerges the 1994 Subaru WRX STi, the very first time the rally wizards at Subaru Tecnica International applied their magic to one of the company's road cars. Engine, transmission, and suspension were all upgraded with an eye on performance; underrated power figures ranged from 247 hp in the "normal" STi to 271 hp in the stripped-down Type RA. That version also came with a trick electromechanical center differential. Neither offered an automatic transmission, as nature intended.

The WRX STi didn't make its way to America until after the millennium, so these first-gen examples have always been a bit of a fantasy for stateside Subie fans. Whatever your thoughts on the STi now—not enough power, too much cultural baggage—back then it was pure, unadulterated, all-terrain fun.

Japan's quirky-and-capable 4WD cabover vans are common targets for import, but there's another foreign off-roader you should know about: the Nissan Terrano II. Built on the original Pathfinder's body-on-frame platform, the small Terrano II also offered an even smaller two-door version that makes for an interesting and cheaper alternative to the more common Toyota Land Cruisers and Suzuki Samurais. Real four-wheel-drive, a manual transmission, and a tidy footprint—what more could you want? A different badge? Fine, it was also sold as the Ford Maverick in Australia and the U.K..

But it's the Nissan you should seek. There are a few reasons why the Terrano II hasn't achieved the cult status of its contemporaries, its flimsier appearance and pokey four-cylinder engine among them, but the truck takes well to modifications and offers an affordable base for building the oddball mini-overlander of your dreams. You definitely won't see another one out there on the trail. That is, for now.

Renault left the U.S. market in the late 1980s when it finally abandoned its failed AMC experiment, so we never saw the introduction of the Clio Williams—not that American buyers had a lot of time hot hatches at the onset of the SUV boom, anyway. But Renault's initial, limited run to fulfill the car's rally homologation obligation proved a sales success when it launched in 1993, so much so that executives decided to whip up a second run for the following year. Behold: the 1994 Renault Clio Williams 2.

Historically, few do hatchbacks like the French. The Clio Williams is notable for its buzzsaw of a 145-horsepower four-pot, its wider front track width compared to stock, and the fact that it can out-handle nearly any hatch of the last few decades. The Clio Williams 2 is a better Golf GTI. Don't say we didn't warn you when our fellow Americans start realizing it.

By 1994, the Japanese bubble economy that gave rise to so many world-beating performance cars—things like the Mitsubishi 3000GT VR-4 and the FD Mazda RX-7—had well and truly burst. But all the good things that had been set in motion during the boom times were still working their way through the pipeline, and thus things like the hardened Honda NSX Type R still made it out the door.

The original NSX is lauded as one of the best-handling cars of all time. The Type R is what happens when you take what few compromises it has out of the equation in exchange for raw ability. That means losing things little things like the stereo and air conditioning and traction control, strengthening the chassis, stiffening the suspension, adding a more aggressive limited-slip differential, and tweaking the transmission to eke out every last bit of the NSX's potential on a track. What do you gain? A new appreciation for Honda's masterpiece, for starters.

Following a string of questionable business decisions, the collapse of the sports car market in America during the early-1990s recession left Porsche in dire financial straights. The front-engined 968, a heavy refresh of a car dating back to 1976, was a good-enough stopgap of a model that ran for just four years from 1992 to 1995 before the Porsche Boxster arrived to save the day. But the story could have been different if America had been offered the 968 Club Sport, a lightened model made to dominate the track.

No air condition, no power windows, no sound insulation, no back seat, and no airbag. Losing all that unnecessary stuff saved over 200 pounds and unlocked the 968's sharper side, resulting in a car that's more in line with Porsche's knife-edged ethos today. It was a suitable finale for a form that served Porsche well for nearly two decades, and one that you can finally experience with the full blessing of the law this year.

The chance that anyone reading this is in a position to import a McLaren F1 and become driving buddies with Jay Leno is infinitesimally small. Still, it's my duty to inform you that more F1s than ever before are legal to drive in the United States now that we're firmly a quarter-century ahead of the car's second full production year in 1994. Only 64 road-going models were made, and they all get a round of American suitors when they turn 25.

What else do you expect from one of the fastest production cars ever made, whose 3.2-second 0 to 60 time and top speed of 240 mph still impress today? From its free-breathing V12 engine to its iconoclastic central driver seating position, Gordon Murray's technologic tour-de-force has been gracing bedroom walls and inspiring gearheads for decades now. Isn't it time you finally got your hands on one?

Today's Alfa Romeo Giulia Quadrifoglio owes its existence in part to the Alfa Romeo 164, the last Alfa that was worth a damn, and its ultimate form: the all-wheel-drive 164 Q4. In regular guise, the Alfa Romeo 164 was a unique front-wheel-drive sedan with just enough purpose in those Pininfarina-drawn lines to justify its existence. The Q4, short for Quadrifoglio 4, ran a Steyr-Puch-developed all-wheel-drive system that could transfer 100 percent of power to either axle on demand.

The 24-valve V6 was tuned to 230 horsepower and connected to, what else, a six-speed manual transmission. The 164 Q4 could top 150 mph—not bad at all. Like the Giulia, these cars never had a reputation for reliability, a cold reality that's gotten worse (and more expensive) 25 years down the road. Anyone seeking a newly-legal example would do well to find the cleanest model out there, whose first major service is still going to cost their firstborn child. The sound of that engine is worth it, though.

A bug-eyed little cousin to the Toyota Supra with a taste for gravel, the third incarnation of the Toyota Celica GT-Four wasn't sold in the United States when it was released in February of 1994. That's a shame. It was the strongest statement made by Toyota's small coupe yet, a turbo-four fighter with all-wheel-drive and a five-speed manual transmission. But the bigger tragedy is that we missed out on the 2,500 homologation cars Toyota had to build to enter the Celica GT-Four in World Rally Championship Group A competition.

These WRC Edition cars came with cooling upgrades, a water injection setup, and all the hardware required to set up an anti-lag system. Right, and that big old wing out back. Japanese market models had 252 horsepower and optional ABS—Toyota really wasn't messing around. It's just too bad that drive extended to its WRC efforts, where Toyota Team Europe was banned from rallying in 1995 when it was caught fitting the Celica with an illegal turbo restrictor plate to bypass power regulations.