It's even powered by a 4.0-liter Dongfeng-Cummins turbodiesel. 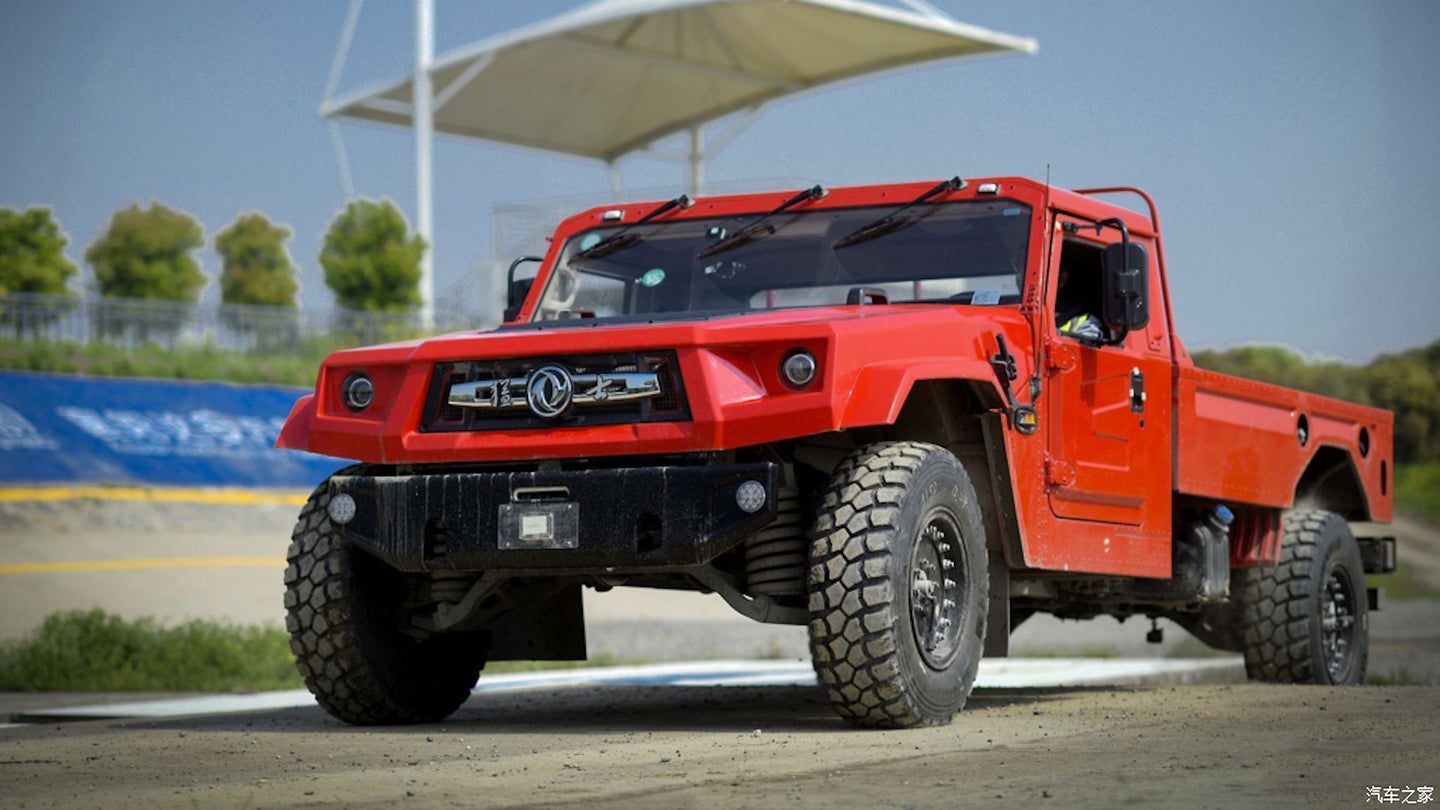 One of the few things that have shown the potential to unite the East and West is our common fascination with military trucks. The Czech like their Tatra T813 8x8s, we Americans our Jeeps and Humvees, and the Chinese, the vehicle they derived from the latter, the Mengshi (warrior). And, just as the AM General HMMWV spawned a civilian variant in the form of the Hummer H1, China's military workhorse has now birthed a civilian child of its own, called the Dongfeng Warrior M50.

Chinese state-owned automotive conglomerate Dongfeng (or East Wind) has, according to Car News China, commenced production of a civilian version of its familiar-looking Warrior. The reason for this faint resemblance to the H1 becomes obvious when considering its lineage, which according to an archived Sino Defence story can be traced to reverse-engineered H1s imported by Chinese oil companies in the 1990s. In a sense, then, the Warrior M50 can be considered an H1 with Chinese Characteristics™.

Like the original Hummer, the M50 is reportedly a body-on-frame vehicle with its drivetrain mounted aft of the front wheels, making it front-mid-engined. QQ identifies this engine as a 4.0-liter Dongfeng-Cummins turbodiesel, presumably a local variant of the 4BT, producing 200 horsepower and 443 pound-feet of torque. These travel through a manual transmission—reportedly either a five- or six-speed—to all four wheels and can propel the M50 to a reported top speed of 75 mph.

Because it's mounted so far back in the chassis, the engine forces the M50's interior to adopt an H1-like configuration with a displaced giant center console. Atop this sits an eight-inch screen, one of the M50's only luxuries aside from automatic air conditioning, electric windows, and leather seats—the majority of trim is plastic according to a Chinese blog. A single-cab pickup is the only body option for now, though a four-door passenger version is reportedly expected to follow soon.

Like the military vehicle it's based on, the M50 is a capable off-roader, with huge tires affixed by double-wishbone suspension near the ends of the chassis, giving approach and departure angles said to near 70 and 45 degrees respectively. 16.1 inches of ground clearance reportedly aid in wading up to 47.2 inches of water, which the M50 will almost certainly encounter on off-road excursions where it dips into its dual fuel tanks, whose combined capacity reportedly totals 31.7 gallons.

China's equivalent of the Hummer H1 costs roughly $103,300, making this odd off-roader about as pricey as Toyota Mega Cruiser, and significantly more so than a surplus Humvee—though not a tuned Mil-Spec example. There's pretty much no market for them outside P.L.A.-philes, and even in China, one can't imagine they're anything but a fringe group.