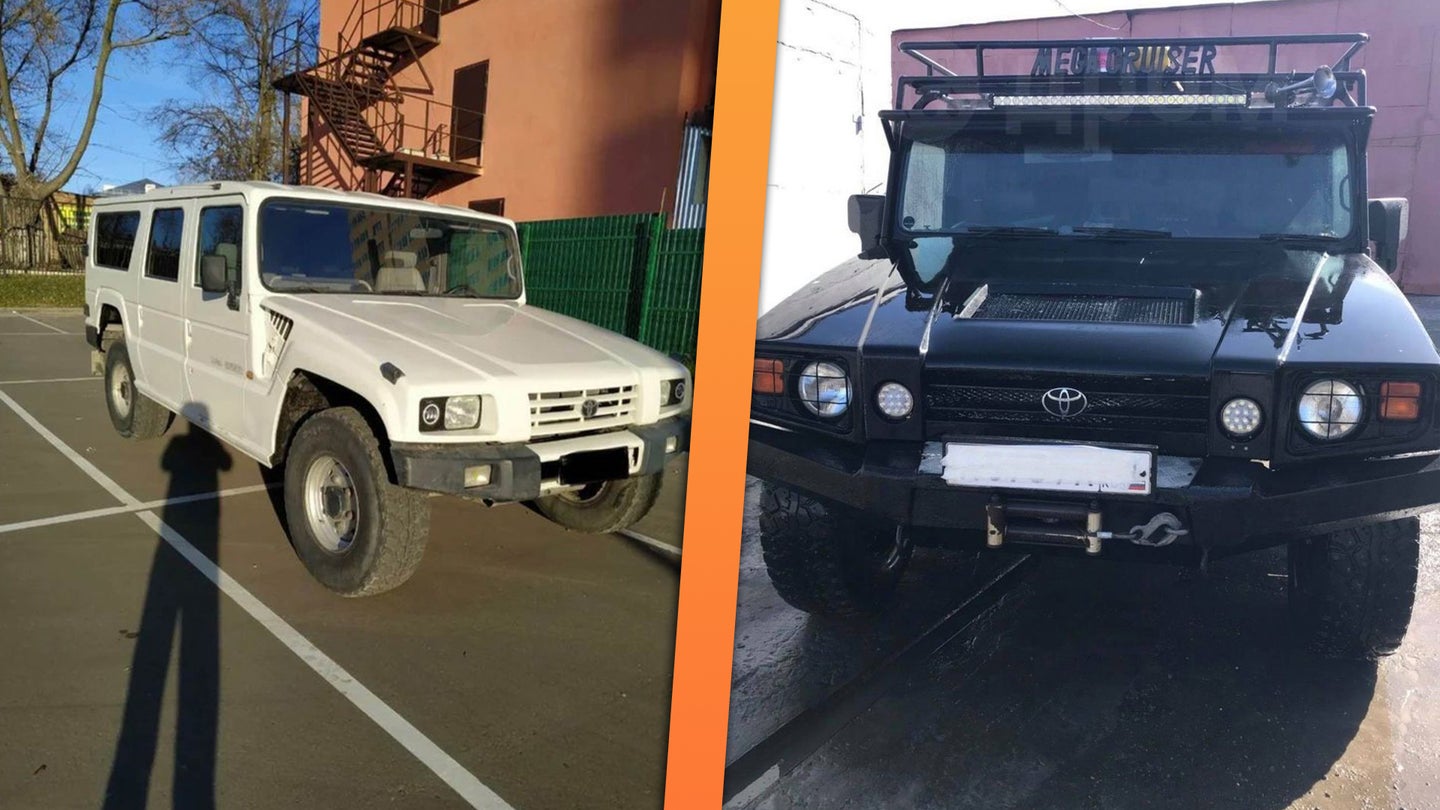 If there's one granddaddy of all land yachts, it's the Toyota Mega Cruiser. The house-sized truck was sold exclusively in Japan during the late '90s and despite it having the aerodynamic characteristics of a brick, it's one of the most collectible off-roadrs out there... that is, if you can actually find one.

Fortunately, we've managed to find not just one, but two of these absolute units for sale on Facebook Marketplace. If you've been looking for one—or happen to have an extra $120,000 burning a hole in your pocket—the time is now.

In case you aren't familiar with our Lord and Savior Toyota Mega Cruiser, let's have a quick history rundown of how this limited-run truck came to be.

Surely you're familiar with the Hummer H1. It's the gigantic military-turned-civilian-market truck that Arnold Schwarzenegger himself endorsed, and it single-handedly set a precedence for what king of the road vehicles must be. Piloting it was like driving an off-road-capable boulder down the highway, all whilst guzzling a gallon of fuel every 10 miles. Toyota soon saw the western infatuation with the H1 and—in the height of the Japanese bubble economy that helped to cement many of the '90s classic tuners into history—immediately decided to build its own competing offering release exclusively for Japan.

Soon, the Mega Cruiser was born and much like the H1, it was a military use truck that just so happened to also have a civilian offering, respectively coined as the BXD10 and BXD20.

The Japan-only release of the civilian-issued Mega Cruiser and its limited-number production makes it insanely collectible in the United States. Unfortunately, under usual circumstances, U.S. import regulations forbid vehicles newer than 25 years old to be imported for road use. That means the majority of these beasts can't be brought stateside, even if you happen to find one of the estimated 149 examples that Toyota built for civilians. That all changed last year when some of the first units became of age, and now they've started making their way over.

Still, even though it was quite obvious that the Mega Cruisers would eventually become available in the U.S., we were surprised when we happened across a Facebook Marketplace ad offering up a beautiful white example with just 44,000 miles on the odometer. What's more, this white example is left-hand drive. Toyota only produced an estimated 12 units with the steering wheel on that side, which may or may not be desirable depending on which direction you prefer to enter the drive-thru.

As it turns out, Valentin saw the opportunity to begin importing these trucks as a business venture, forecasting their rise in collectability. He reached out to numerous contacts around the world and slowly began accumulating a small collection of both BXD10 and BXD20 Mega Cruisers and shipping them across the ocean.

His asking price for this particular example? $120,000—about 42 percent more than what the vehicle sold for in Japan when it was launched. Talk about an appreciating asset.

For the budget-conscious, Valentin also has another Mega Cruiser up for sale with a contrasting black paint job for a slightly more attainable $90,000. This example has a bit more time on the road with an estimated 85,000 miles under its belt, and some interesting modifications to both the interior and exterior, but it isn't any less glorious. Just look at that roof rack with bold "MEGACRUISER" lettering.

The Mega Cruiser had absolutely everything one could want from an off-roader. It came equipped with inboard brakes, portal axles (which actually gave the truck around half an inch more clearance than the Hummer H1), a Torsen limited-slip differential, four-wheel steering, and even central tire inflation. The truck also sported a number of quirks that separated it from the monotonous norm of everyday SUVs—dual rear wipers, a pull-out step, offset mirrors, and an overly spacious interior that just didn't quit.

Toyota continued to build the low-volume Mega Cruiser until about 2001 and officially ended sales the following year. The fact is, the truck simply wasn't fit for narrow Japanese roads and the incredibly expensive ownership experience due to its footprint. As a result, these gigantic trucks are less than plentiful and are now beginning to shooting up in value.

We expect more of these to eventually make their way over to U.S. soil, but these are some of the first stateside examples that we've run across given the 25-year rule. Call it an early adopter's fee or an investment for something hard to find—whatever justification you need to make it happen. The Mega Cruiser is at stake, damn it!