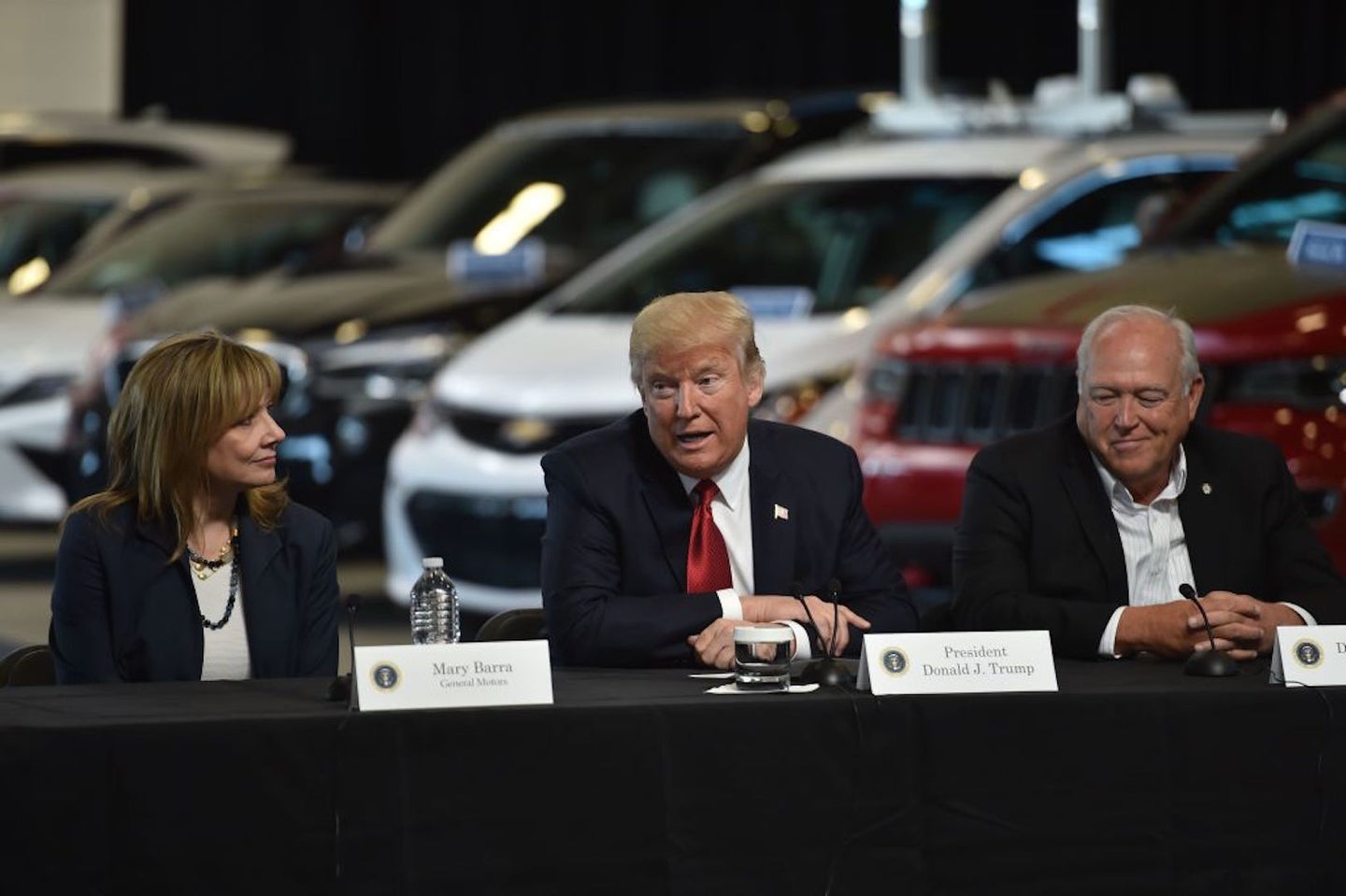 They once roamed this land in great, thundering herds. Today, the culling of the Great American Sedan continued—along with that of the Great American Autoworker. General Motors, seeking $6 billion in cost savings in a softening market in North American and China, plans to shutter three sedan-centric plants in the U.S. and Canada in 2019. To that unlucky tally, add two U.S. transmission plants in Baltimore and suburban Detroit, and two assembly facilities outside of North America. About 6,300 North American production workers will trade the assembly line for the unemployment line. GM is also offering buyouts to any and every white-collar employee with more than 12 years of experience. Hiding behind the water cooler won’t help: GM wants to trim 15 percent of its executive force, and will surely end up dismissing thousands of executives who don’t accept a buyout. Add it up, and GM will cut more than 14,000 jobs.

In that Dickensian spirit, I’d like to say Merry Christmas: Not to laid-off or bought-off workers, but to GM investors, who cheered the news by bidding GM stock up nearly 8 percent, to its highest levels since July. But that’s today’s auto industry, in which GM’s record sales and profits mean zilch to investors who prefer their shares in car companies—oops, “mobility providers”— to pop like champagne corks, and to hell with the pesky bubbles. The auto business is no longer about the cars you actually make. It’s about the cars you might make, the world-changing “someday” solutions that attract billions of dollars from the Silicon Valley crowd.

GM surely sees as much. CEO Mary Barra intends to reapportion the GM pie, doling a larger slice to autonomous and electric cars, including ongoing hiring and investment at GM Cruise LLC, the company’s autonomous car division in San Francisco.

“We’re taking these actions while the economy is strong,” Barra said. “The industry is changing rapidly. This is about making sure GM is lean and agile and getting in front of and leading in autonomous and electric vehicles.”

The thing is, Barra may be right, that this is all smart, proactive business, yadda yadda. Although, if GM is serious about leading in autonomous cars, it might start by offering its best semi-autonomous technology—Cadillac's outstanding SuperCruise—on every last car and truck in the GM lineup, instead of letting it languish as a pricey option on the now-DOA Caddy CT6. And apparently for GM, “getting in front” of electric vehicles means dumping one out the back of Detroit's Hamtramck Assembly—killing the plug-in hybrid Chevy Volt that became the public face of the “new” and newly enlightened GM as it was obtaining a federal bailout. But slow-selling sedans will take the cruelest cut, with several models to be killed outright in 2019: The Chevrolet Impala and Cadillac XTS, currently built at the Oshawa plant in Ontario. The Cadillac CT6 and Buick LaCrosse in Hamtramck, along with the hatchback Volt. And the Chevrolet Cruze in Lordstown, Ohio—the nine-lives facility that, when I visited just five years ago, was churning out 280,000 Cruzes a year on three shifts of proud, highly engaged workers. Now, like the traditional-car plants in Oshawa and Hamtramck, Lordstown is down to a single shift, and that’s not going to cut it: GM plants are operating about 1 million units short of full capacity, with cars responsible for the vast majority of that imbalance. And the painful truth is that, as in the coal industry, there are fewer and fewer manufacturing jobs to save or, ahem, bring back. Oshawa, just east of Toronto, has built GM cars for a century. As late as the Eighties, its Autoplex was still among the world’s biggest assembly plants, employing 23,000 workers. It’s been steadily whittled to barely 2,500 employees today.

Still, political fallout was strong and swift in both the U.S. and Canada. GM workers in Oshawa stormed off the job Monday, and were soon blockading plant entrances, furious over what they viewed as broken promises from GM. UAW officials excoriated GM’s continued outsourcing of models and jobs to Mexico and China; including a new, south-of-the-border Chevy Blazer—especially in light of the government’s GM bailout and employee concessions during the dark days of the recession. Officials vowed to fight GM “through every legal, contractual and collective-bargaining avenue.”

“We must step away from the anti-worker thinking of seeking simply the lowest labor cost on the planet,” UAW President Gary Jones said. “More importantly, we understand that these companies, including GM, are no longer in trouble. They are recording annual profits in the tens of billions.”

Canadian Prime Minister Justin Trudeau tweeted that he had spoken directly with Barra to express his “deep disappointment” with the decision.

As for President Trump, Ford has been his preferred sparring partner, but he may have found a new, bigger one in GM. Trump told reporters at the White House that he was "not happy" with GM's job cuts.

"You know, the United States has done a lot for General Motors," Trump said, noting that he had been "very tough" with Barra and urged her to keep its Ohio operations alive: "You better get back in there soon."

"They say the Chevy Cruze is not selling well," he said. "I say well then get a car that is selling well and put it back in."

GM will surely seek to avoid a Twitter spat. Yet Barra might remind Trump that, months ago, GM publicly warned that Trump’s tariffs on imported steel and aluminum would directly threaten U.S. jobs and investment. Ford said the same. Now, GM And Ford say that those onerous tariffs have cost them a combined $2 billion in financial losses that's crimping their business and forcing job cuts.

Among GM plants, Lordstown was once as notorious for its crapulent small cars—including the Chevy Vega and Cavalier—as it was for wildcat strikes and pitched labor battles in the Seventies and Eighties. But Lordstown steadily grew into a marvel of manufacturing efficiency, and a lifeblood of jobs in a northeastern Ohio that had previously been laid low by the loss of another major industry, that being steel. Lordstown has escaped the executioner’s axe before. But unless GM can replace the Cruze with another model, this really looks like the end. And it's impossible to overlook the political geography here. The four U.S. plants set to be shuttered—two in Michigan, one in Ohio, plus a transmission plant in Baltimore—all occupy a prime notch on the Rust Belt. It's the region where President Trump made bold, serial promises to save manufacturing jobs and reverse the fortunes of disillusioned Midwest and blue-collar voters. Those voters ended up playing a crucial role in his election, and Trump's reelection fortunes may hinge on them again in 2020. Theboastful promisesincluded a rally in gritty Youngstown—just 20 minutes from the Lordstown plant—where the President had this to say about Ohio’s “big, once-incredible job-producing factories:”

Something tells me that we'll be seeing a lot of "For Sale" signs in northeastern Ohio by next year. Ditto for Michigan, and Maryland, and Ontario. But where looming job cuts leave some hearts cold, the prospect of high(er) profits and share prices is bound to warm others. Like I said, Merry Freaking Christmas.