This could easily be the quietest and smoothest diesel engine we've ever tested—period. 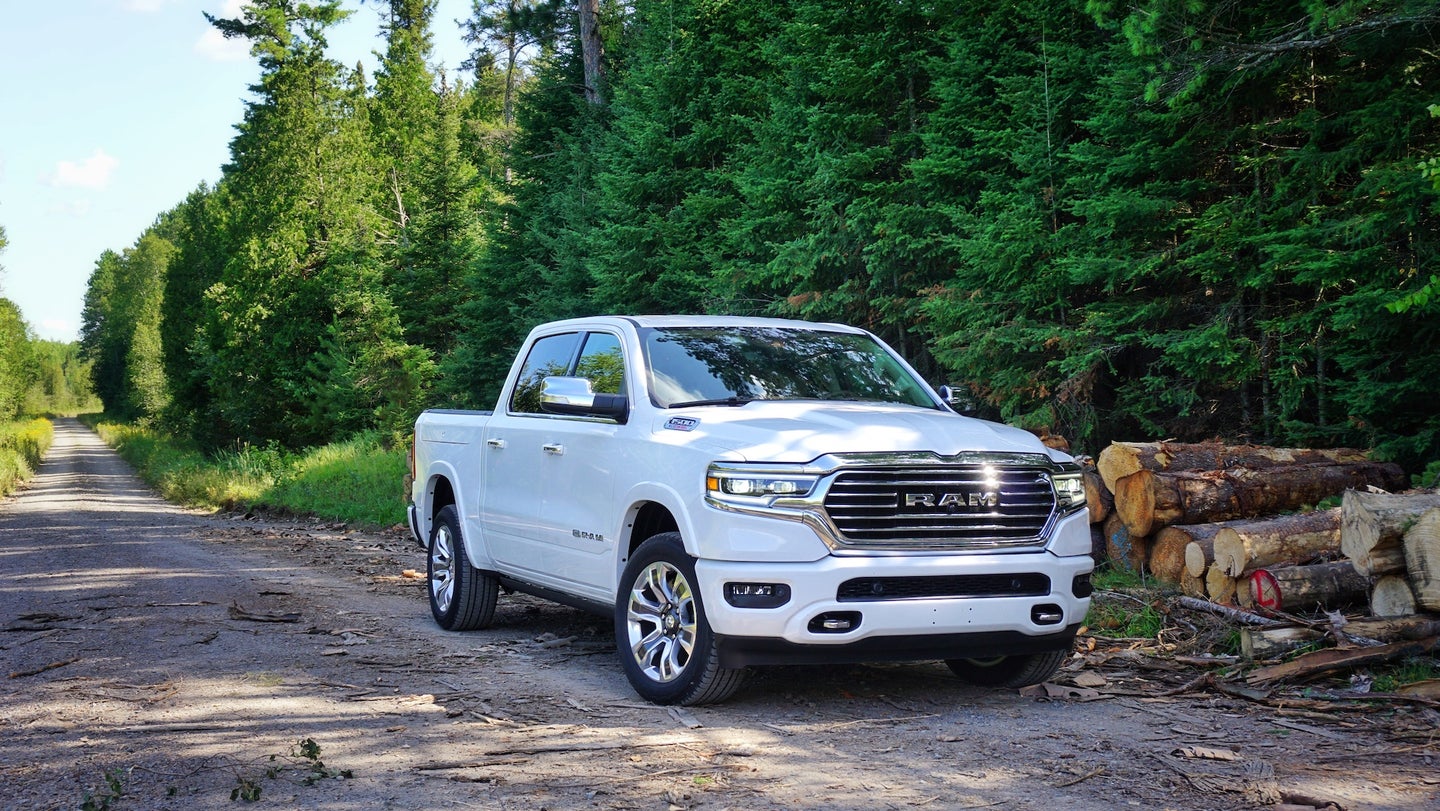 How do you make a great pickup truck even better? Easy, give it a more capable engine and make it go farther between fill-ups. That's exactly what Ram set out to accomplish with the newest addition to its half-ton lineup: the 2020 Ram 1500 EcoDiesel.

Powered by the third generation of the brand's diesel-sipping engine, the 3.0-liter V6 offers increased torque and horsepower over its predecessor, while also promising improved fuel economy (although the latter we aren't sure yet because official figures haven't been divulged). The new drivetrain aims to give Ram and diesel lovers a cutting-edge engine capable of towing big, going far, and doing so without breaking the bank.

And unlike its competitors, Ram's making it available across the entire lineup, including the bare-bones two-wheel-drive Tradesman, and not just the high-dollar trims that rule today's pickup truck market. Also, for the first time in the EcoDiesel's history, it's also being made available in the off-road-ready Rebel.

The strategy is clever, really. Not only will this decision be welcomed with open arms by customers nationwide, but it'll allow Ram to monetize the engine better. This will also help capitalize on individual buyers wanting luxe diesel trucks for towing weekend toys, as well as businesses looking for longevity in work-duty fleet vehicles.

In order to experience the new 1500 EcoDiesel, Ram invited us to picturesque Duluth, Minnesota, where we drove a couple of hundred miles over the course of eight hours at the wheel of both the Laramie Longhorn and Rebel trims. Also, we got our first chance to play with Ram's Multifunction barn door tailgate.

Not quite all-new, approximately 80 percent of the new-gen EcoDiesel has been completely redesigned. The 3.0-liter turbodiesel V6 produces 260 horsepower at 3,600 rpm, an eight percent increase over the outgoing engine, and 480 pound-feet of torque at just 1,600 rpm, also a 14 percent increase. Maximum towing capacity is rated at 12,560 pounds, besting the 11,400 of the Ford F-150's Powerstroke and eclipsing the 9,300 of the Chevrolet Silverado's Duramax.

According to Ram, a new water-cooled turbocharger with variable geometry is at the heart of the new engine, which improves efficiency and response as engine RPMs move across the powerband while driving. The third-gen engine also benefits from a dual, high- and low-pressure exhaust gas recirculation system (EGR), which is a first for a diesel engine in North America. This system, aided by redesigned pistons and combustion chamber, helps cool exhaust gas temperatures to improve fuel economy and reduce nitrogen oxide (NOx).

The engine block itself is 50 pounds lighter than its predecessor even though it retains the same architecture. The weight savings were achieved by manufacturing various components from lightweight materials, however, the crankshaft and connecting rods are still made out of forged steel for durability purposes.

All of this diesel magic will set you back a pretty penny. As a standalone feature, the new diesel V6 is a $4,995 option, or a $3,300 premium over the 5.7-liter Hemi V8 eTorque on Tradesman, Big Horn, Rebel, and Laramie models.

On and Off the Road with Ram

Driving the new EcoDiesel around isn't much different than its non-diesel siblings—and that's a good thing—considering we've been wowed time and time again by Ram's new-gen 1500 since its debut at the 2018 Detroit Auto Show.

Right off the bat, the biggest surprise comes when you start the engine. Thanks to the new design change that offsets the piston a diminutive 0.3 degrees from the centerline, what's known as "piston slap" is basically non-existent at idle. This might be bad news for hardcore diesel lovers who take pride in the engine's famous cadence, but don't worry, all you have to do is press the accelerator to get your auditorial fix, though we must admit this could be the quietest diesel truck engine we've ever tested.

The eight-speed, ZF-derived transmission has been tweaked to accommodate higher torque and lower shift points, making it even more seamless than before. Despite having eight gears to play with, we found that sudden acceleration or braking never caused it to fumble for the right gear. Also, the EcoDiesel gets the rotary shift knob of the regular 1500 instead of the steering column-mounted shifter of the diesel-powered Heavy Duty. This is a good thing, as it frees up the center console for more storage options and allows for a less-crowded steering column.

Lay heavy into the accelerator and all 260 horses under the hood will do little to impress you, especially if you aren't carrying a heavy load in the bed of the truck or towing a trailer. Do the same with a 5,000-pound boat—admittedly less than half its max ability—and things will be much different. You'll feel the truck and trailer accelerate with ease much faster than anticipated. We spent part of our day towing that beautiful boat around the many lakeside roads Duluth had to offer, wishing every minute that we could pull up to a boat ramp, unload, and disappear into Lake Superior for the rest of the day. Sadly, Ram made it very clear that that would be stealing. Bummer.

Things were equally effortless once at full steam on the highway—keeping up with or even passing traffic is no concern. Thanks to larger brakes on the 2020 Ram 1500 (gasoline and diesel), it stopped with serious confidence, too. We really wish Ram would've had a heavier load to test the truck more effectively, but this just means it's up to us to find something cool to haul later this year when we perform an in-depth test.

A short part of our day was spent at a local off-road course, which gave us the opportunity to see how the diesel engine benefits the venerable Rebel. Albeit brief, the quick rip highlighted how the engine's extra torque helps in dicey situations like stopping halfway up a loose 35-degree hill. All it took was a gentle right foot—with four-wheel-drive engaged and the rear differential locked, the Rebel completed the stunt without breaking a sweat.

The preset driving route didn't really allow us to gather street- or highway-only fuel economy numbers, but after a long stint behind the wheel in mixed driving conditions our trip computer read 25.5 mpg in a loaded-to-the-brim four-wheel-drive Laramie Longhorn. We must note that this included some heavy acceleration and lots of idling during photo-taking. Also, gauge readouts aren't totally accurate. Ram hasn't set a deadline for revealing official figures, only saying that they'll come closer to when the truck goes on sale in the fourth quarter of 2019.

Tailgates are getting complicated nowadays (that's a grim statement, huh?)—but it's true. After testing GMC's MultiPro tailgate a handful of times before, we definitely welcome the versatility and thoughtfulness of it all, but overall it's confusing in that it offers way too many configurations. Not to mention it's idiotic that you can't deploy it with a trailer hitch (or trailer) attached.

Ram's approach is much simpler, and therefore better. It only offers two functions: normal tailgate and split tailgate—much like the Honda Ridgeline. This means only two buttons to operate the whole thing, and only two different motions to learn in order to master your fancy tailgate (down and sideways). Is it as versatile as GMC's? No. Does it fulfill its mission of making it easier to load or unload stuff deep inside the bed? Absolutely. Can you use it with a trailer hitch attached? You betcha.

Verdict on the Ram Diesel

Overall, the new EcoDiesel takes the already impressive Ram 1500 to new heights by awarding it more torque, higher towing capacity, and allegedly better fuel economy than the gasoline engines already on tap. As a package, the truck is refined, extremely quiet, and an excellent choice for those looking to spend some serious time behind the wheel towing things from point A to point B—especially in the higher-end trims.

As a standalone engine, however, it's difficult to stack it against the competition until we know the official fuel economy figures. So far the Silverado is leading the charge with 33 mpg highway and the F-150 follows closely with 30 mpg (both rear-wheel-drive). Knowing how competitive the truck arena is nowadays and how badly Ram is fighting to permanently steal the Silverado's second spot in truck sales, we can't imagine the folks in Ferrara, Italy (where the diesel engine is built) will be happy with anything less than 34 mpg. Stay tuned.