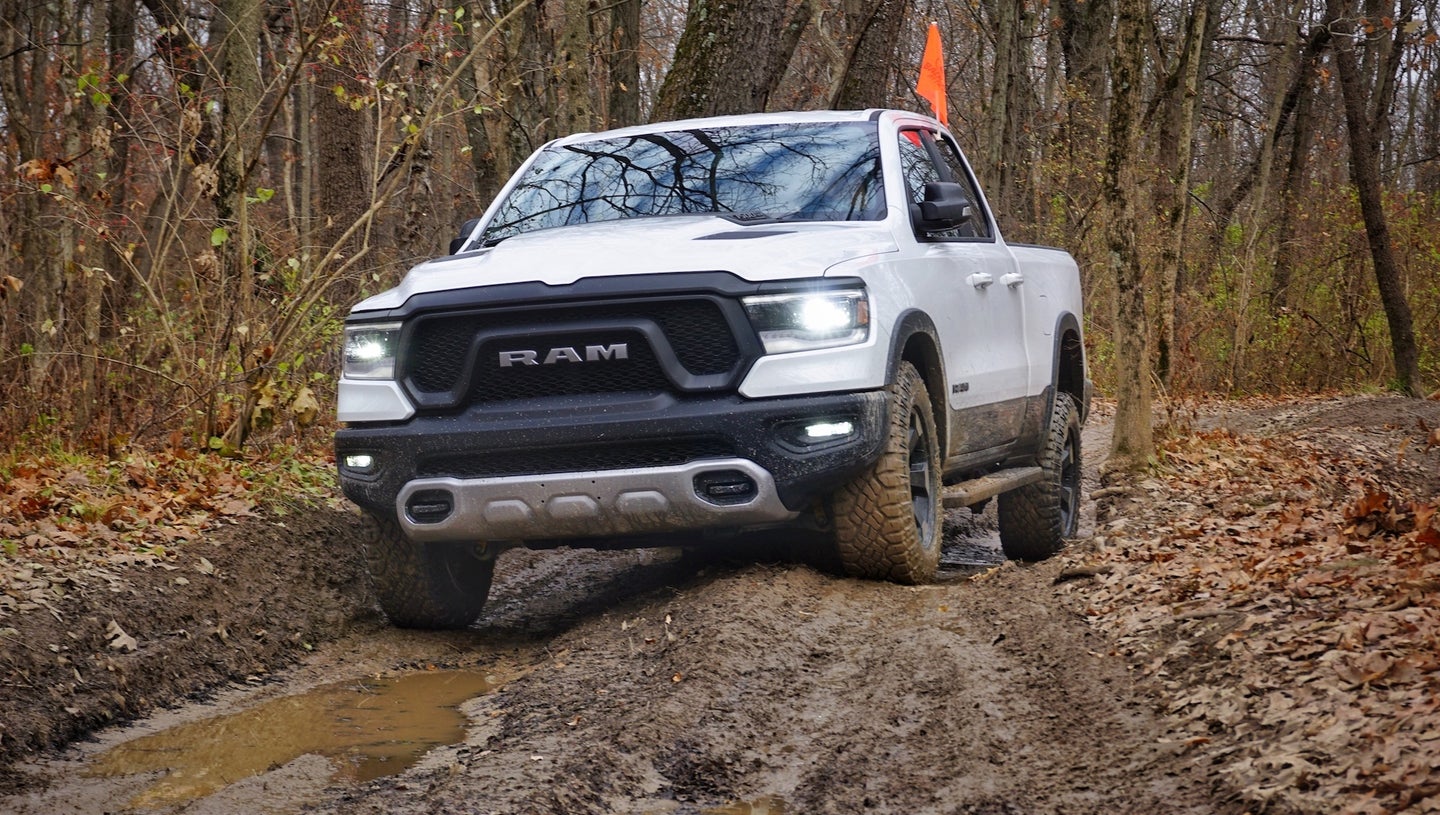 Right away the biggest surprise was how smooth everything was, even without the air suspension. The steering, the pedals, the suspension, the whole package. Power delivery was linear and predictable, which is important when climbing muddy hills, and the brakes offered a strong initial bite even when caked with mud, which is important when descending said muddy hills. The Rebel exuded a sort of mechanical synergy that I never experienced in its predecessor, which drove like a 1500 on steroids but also like an underpowered Power Wagon, plagued with brutish feel off-piste.

Whipping the Rebel's rear end around on sandy, gravelly mounds was fun and effortless, and the half-ton pickup felt right at home slinging dirt and whatever else happened to fall under those tires. However, the real challenge was in the woods, where narrow and muddy trails with deep ruts could quickly go from "piece of cake" to "holy sh*t." This is where one characteristic of this specific truck turned out to be a positive, where normally it'd be seen as a negative: the Quad Cab.

For most intents and purposes, the Ram's Quad Cab is just fine for most single folks who don't typically haul more than one or two bodies. But if you have kids or a dog, or even a passing need to carry a third person sometimes, don't even think about it—just jump straight into a Crew Cab. It's that cramped back there. But in the tight trails of Badlands Off-Road Park, the shorter wheelbase was a thing of beauty, negotiating three-point turns and slipping between trees or rocks much easier thanks to the shorter overall length (228.9 inches to the Crew Cab's 241.8). Even in serious mud, which more often than not made the rear tires beg for grip, the Rebel carried on to the surprise of the park's resident Jeepers.

Perhaps the strongest argument you can make for the 2019 Ram 1500 Rebel is how easy it is to turn anyone into a recreational off-roader. For this test, I had motorsports contributor and friend to The Drive Ryan Lewis along for the ride. Ryan also happens to be a professional racing driver and racing coach, which means that he spends most of his days behind the wheel of something like a McLaren 720S. Needless to say, he was out of his usual scene.

Watching Ryan approach boulders slowly and with the utmost care was downright hilarious, knowing that the same obstacle could be taken with speed and head-on. But seeing him become more comfortable with the truck's vast capabilities little-by-little was a testament to the reassuring feeling the Rebel provides. This further confirmed how far the Rebel (and Ram trucks in general) have come in recent years. It's softened its approach just enough to bring new buyers into the fold, but not enough to take away from the astounding ability to conquer practically every obstacle—all while heating your hands and butt if you so desire.

The Rebel isn't perfect; no truck is. With that out of the way, its price tag won't force you to reconsider your line of work (let's not forget the Raptor starts at $57,435), and it can tackle moderate to difficult off-road trails while oozing panache and confidence. And if you like playing in mud, it's pretty darn good at that too.

2019 Ram Heavy Duty: Out Tows, Out Powers, and Out Works the Competition

A new 6.7-liter Cummins diesel cranks out an earth-moving 1,000 pound-feet of torque.

“Luxurious” is almost an understatement for the Ram 1500 pickup truck in Limited trim.

The swanky new Rebel turns it up to 12 with a bigger infotainment screen and a high-end interior.