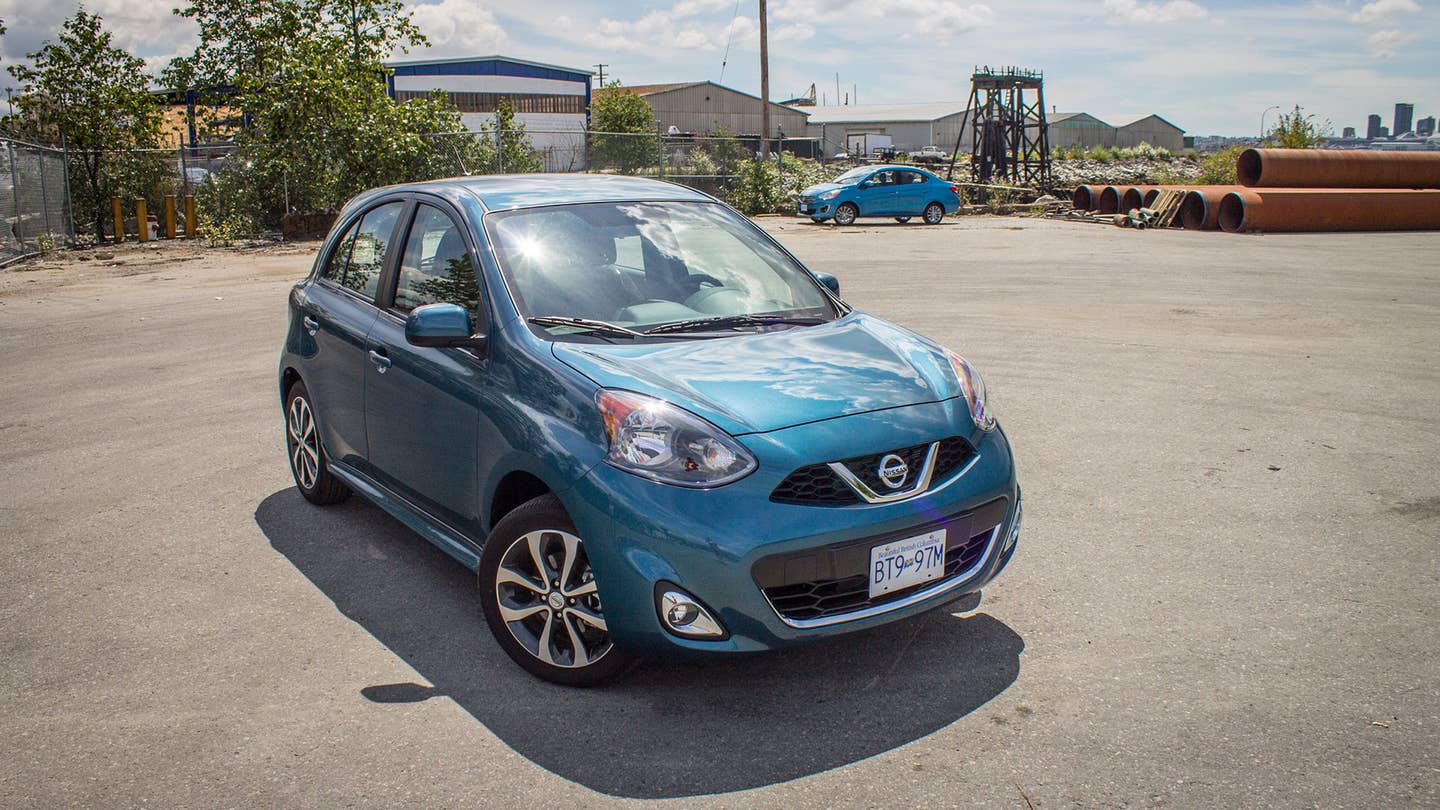 There's an old axiom in the car world: It is more fun to drive a slow car fast than a fast car slow. Fair enough, I suppose, but as a veteran automotive journalist who's spent time behind more than his fair share of slow cars over the years, I can tell you loud and clear: Not just any slow car will do.

Witness the wide divide between the Nissan Micra—available in your author's native Canada, not in the U.S.—and the Mitsubishi Mirage. Despite a lowly 109-hp engine and a four-speed automatic transmission like that in your grandmother's 1998 Sentra, the Micra is so good to flog, Nissan created an entire racing series around it. Cars pinball off each other, careen around corners, and viciously claw for victory. Watching the subcompacts slap-fight each other around the track is like putting a drop of pond water under a microscope and glimpsing the microscope combat within.

The Mirage, on the other hand, is to driving what spray-cheese is to food. It is bland, artificial, and bad for you in some way you can't quite pin down. It will slowly drain you of the ability to feel joy. Driving fun becomes much like the car's namesake: An illusion that's always out of reach.

The axiom, then, is only half right. It's not about fast cars or slow cars, it's about fun cars. Doesn't matter how many horses there are under the hood, or how many kilos of mass they carry around.

So The Drive has taken the initiative of assembling a list of nine slow cars that are guaranteed to be fun to drive. None of them would be quick enough to land an invite from Lord March for the Goodwood Festival of Speed, but each one will still slap a smile on your face when the traffic clears.

Powered by a 1.0-liter three-cylinder engine so small Ford managed to take it through airport security, the Ecoboost version of the Fiesta has just 123 horsepower to play with. Happily, it's only available with a manual-transmission, just like its Blue Oval brethren the Shelby GT350 and the Focus RS.

Unlike its apex-slaying brethren, the Fiesta is slow. Very slow. It has neither drift mode nor a flat-plane crank. Even so, is has the same chassis as the sprightly Fiesta ST, and the available 148 lb.-ft. of torque provides decent scoot off the line.

Like the Fiesta, the base Mini Cooper is a three-legged (or rather, three-pot) puppy you can't help falling in love with. The S version now comes with the same displacement as a Volkswagen GTI, with JCW versions pumped up to a respectable 228-hp—but the prices on those models bump against near-luxury cars.

Save your pennies, as a base Cooper will still put a grin on your face. The base 134-hp turbocharged three-cylinder sounds off-beat and eager, and pairs well with both the six-speed manual or automatic.

The Smart brand never seemed to translate well outside of Europe. Whaddya mean Smart car? You callin' my car dumb? This is North America, pal: Big is smart.

On paper, the Smart fourtwo still doesn't make much sense. It has worse highway fuel economy than a compact sedan, and costs more, too. However, with an ultra-short wheelbase, 89 turbocharged ponies, rear-wheel-drive, and your choice of a five-speed manual or six-speed dual-clutch transmission, it can feel like the world's tiniest Porsche 911.

Equipped with a soul-sucking CVT gearbox and a pancake-four engine making a relatively moderate 175-hp, the Outback was never going to set anyone's pants on fire. Even if said pants are hemp-based.

However, that doesn't mean there isn't adventure to be found. The Outback's near-Jeep Cherokee levels of ground clearance means it's a set of decent tires away from serious off-road adventure. It's not about how the Outback drives, it's about where you take it—and you can bring the family along.

The Goodwood Festival of Speed has one of the wildest cargo vans on the planet—a white Ford Transit that was used as a testbed for the XJ220's twin-turbocharged powerplant. Now tuned to produce more than 600-hp, it remains one of the quickest machines up the hill.

Our list, on the other hand, has just a regular, automatic van with a 1.6-liter EcoBoost engine— and a madman at the wheel. Paint it white and drive everywhere like one of the U.K.'s maniacal delivery drivers, all of whom seem to think they're in the middle of a rallycross event.

It'd be cheating to put a Mazda MX-5 Miata on this list. Capable of ripping off a quarter-mile time in the 14 second range and carrying all that speed through the corners, the Miata isn't exactly a slow car any more. It also doesn't have much in the way of competition.

However, for the price of a 310-hp turbocharged Mustang, the Subaru BRZ is still trying to make the argument that less is more. Bumped up to 205-hp for the 2017 model year, the BRZ is a lot of work to drive fast—which makes it involving. And, because it's a Subaru, it's really happy on gravel. Get drifty.

With the exception of the Tesla Model S, most electric cars have the personality of a blender. They're marketed as plug-in appliances, a gas-free way to get from A to B.

However, the Soul Eco proves that sensible doesn't have to mean boring. It comes in fun color pairings, one of which resembles the original Batmobile, and it's funky inside and out. It's also a bit of fun to drive, with solid torque available at zero rpm to shove you off the line.

If you're going to buy a four-wheel-drive Colorado, go for the V6. The power helps to move all that weight around, and the fuel economy penalty isn't that bad.

On the other hand, if you want a cheap, small truck, don't check a single box on the options list. You'll end up with a stick-shift rear-drive pickup that pits 4,000 pounds against a 191-hp 2.5-liter four-banger. Slow? You betcha. But capable of bringing home all kinds of bad ideas? Again, you betcha.

For decades, the Honda Civic was about revvy little engines with less torque than a broken Cummins. Lacking low-end grunt, drivers simply revved the nuts off fizzy four-pots. VTEC kicked in, yo, and all was well.

After a brief hiatus where Honda seemed intent on building Corolla clones, the new base Civic once again has its groove back. There's a new 1.5-liter turbocharged four with better twist, but the basic 2.0-liter and a manual makes for a properly effervescent drive. You have to beat the snot out of the engine to get it going—just as a Honda Civic was always meant to be driven.

When it gets slippy on the tarmac, every adjustment matters.