A surprisingly rugged crossover for the working class. 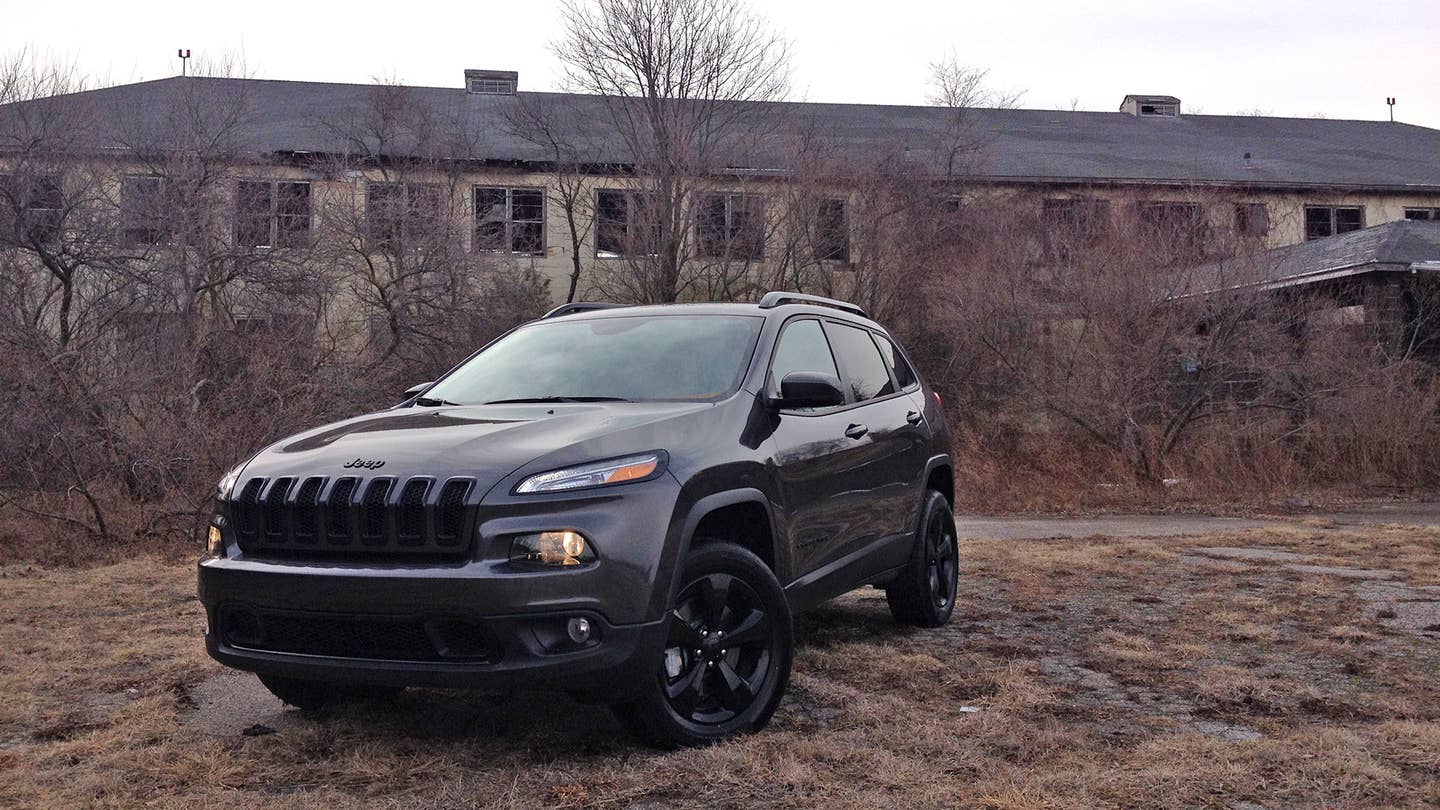 Check your wallet, America. There’s $34,112 in there. Hey, congrats! That’ll buy 68,224 packs of Little Debbie Swiss Cake Rolls, a refurbished three-bedroom bungalow in Detroit, a couple balls of Warren Buffett’s navel lint, or a new car at the nationwide average price. Raid the mattress for some extra quarters and you’ll land in a generously equipped 2016 Jeep Cherokee Latitude 4x4, at $34,705 delivered. There’s V6 power, a nine-speed transmission, all manner of blind-spot warnings and some boss-looking, 18-inch gloss-black wheels. There’s also that kingly Jeep badge, which the Cherokee—if you look past its Dustbuster-fucked-a-picket-fence face—deserves to wear. But does the Cherokee Latitude 4x4 deserve your $34,705?

Prolechariot is a new series about vehicular value. It's about slapping your needs and wants on a wall, grabbing a fistfull of darts, cocking your arm back and trying to strike most, if not all, of your targets. It’s about making the second-largest purchase decision most Americans face, and making it well—nay, making it right. Prolechariots are cars for the rest of us, for the 99 percent, and they’re going to be driven. Hard.

The Drive will bring you a fresh Prolechariot story every other week. The criteria (really a criterium) is simple: Our subject must ring in at or below roughly $34,000, the average price for a new car in America. They're all pretty damn good these days, whatever their price. We’re spoiled for choice, but how to choose?

The Cherokee is as good a Prolechariot subject as anything on the market. No longer the boxy 4-liter Fratelli getaway car of old, the new Cherokee is a composite of everything that matters to American buyers now. Which is to say: It’s a crossover. But it’ll still gladly put a couple tires in the rough, a point of differentiation from the wannabe swamp rats in the Montessori school parking lot.

Here are the five things you need to know about the 2016 Jeep Cherokee Latitude.

Hand on heart, before looking at the spec sheet, we thought our Cherokee was fitted with one of Fiat-Chrysler’s turbocharged four-cylinders. Accelerating to beat a marauding dollar van on Brooklyn’s Flatbush Avenue, the Cherokee’s 3.2-liter V6 delivered the cheese but sounded like whiz. Who cares? you say. It’s a Jeep, not a Jag.Well, Nissan’s 3.5-liter V6 veritably sings, even in a Frontier going 75 with gravel and squirrels stuck in its treads. For ears that care about such things, there’s an adjustment to make to the Cherokee V6’s less than lovely song.

2. The packaging is mighty generous.

Latitude trim bundles some really excellent kit, including the Selec-Terrain control, with setting for sand and mud, snow and ice, and a sport mode. Allowing the 271-horsepower V6 to breathe easier and the auto gearbox to shift later, the latter was the go-to drive around the city, where quick squirts of extra fuel never go unappreciated. Chrysler produces some of the most intuitive multimedia and HVAC control systems on the road. With volume and station-tuning buttons on the inboard side of its thickly padded leather wheel, there’s little reason to fiddle with the Jeep’s capacitive touchscreen. But if you like seat-heater controls buried beneath two layers of digital menus, you’re also in luck.

The V6 and nine-speed rang in at $2,740 combined, and those lovely 18-inch black wheels at $795. Toss in a smattering of park-assist systems, trim pieces, remote start and other bits and bobs, and we’re at our as-tested price of $34,705. The only notable absences were leather and a moonroof.

3. If the Cherokee Latitude 4x4 were a food, it'd be a beef jerky-flavored marshmallow.

The Jeep lacks the kind of sophisticated suspension that lets a 5,000-pound Land Rover tighten its sphincter and effect a luxury sedan about town. That same animal, however, can loosen its taint muscles at the nearest whiff of mud, and get proper dirty. Swerving to avoid potholes in the Cherokee (and sometimes succeeding), a driver senses that Jeep engineers confronted a quandary: Make an offroader that could feign on-road manners, or to make a jacked-up poseur that could feign occasional off-roading? We’d argue that they chose the first scenario, which brings us to...

4. The Cherokee Latitude 4x4 is mad, mad fun in the dirt.

A set of tire tracks lead deep into the stunted coastal pines at Floyd Bennett Field, New York’s first municipal airport. Sprawled across the southeastern edge of The Drive’s native Brooklyn, the complex is now a moldering, weed-strewn wonderland where N.Y.P.D. officers learn to drive like Popeye Doyle and Outward Bound kids contemplate seabirds and the eternal question: joint or bong? A grassy path at the edge of the cracked runway tarmac was ostensibly clear for a Jeep to be a Jeep, so into the woods we went. With the car’s kindergartner-intuitive rotary Selec-Terrain control turned to Sand/Mud, the transmission remapped its shift points to allow the engine to rev higher in first and second gears. With steering wheel seesawing back and forth, suspension flexing over little berms, tires merrily bonking roots and rocks, the Cherokee was transformed. What was once a comfortable if compromised city car was now a mud-flecked hooligan. Dual-purpose in spades.

5. To buy the Cherokee Latitude 4x4 is to know thyself, and thyself’s garage capacity.

Again, Prolechariot is about gauging value, one of the slipperiest commodities known to humankind. With the Cherokee, Jeep did a commendable job threading the needle between on-road manners and off-road capability, and at a price that undercuts a comparably kitted-out Grand Cherokee by about $12,000. If you live in a big city but relish a bit of impromptu muddin’, then the Cherokee can fit beautifully into your life—and into many tight parking spots.

If, however, you have a two-car garage, then there’s a two-car solution: a used, reliable, late-model Civic and a used, lifted, Hella-lighted, balloon-tired, Warn winch-bedecked Cherokee XJ. You’ll come in well below $34,000, someone else will have taken depreciation hits, and you’ll never ask either vehicle to be anything it wasn’t meant to be. That kind of logic is, to borrow a phrase, trail-rated.