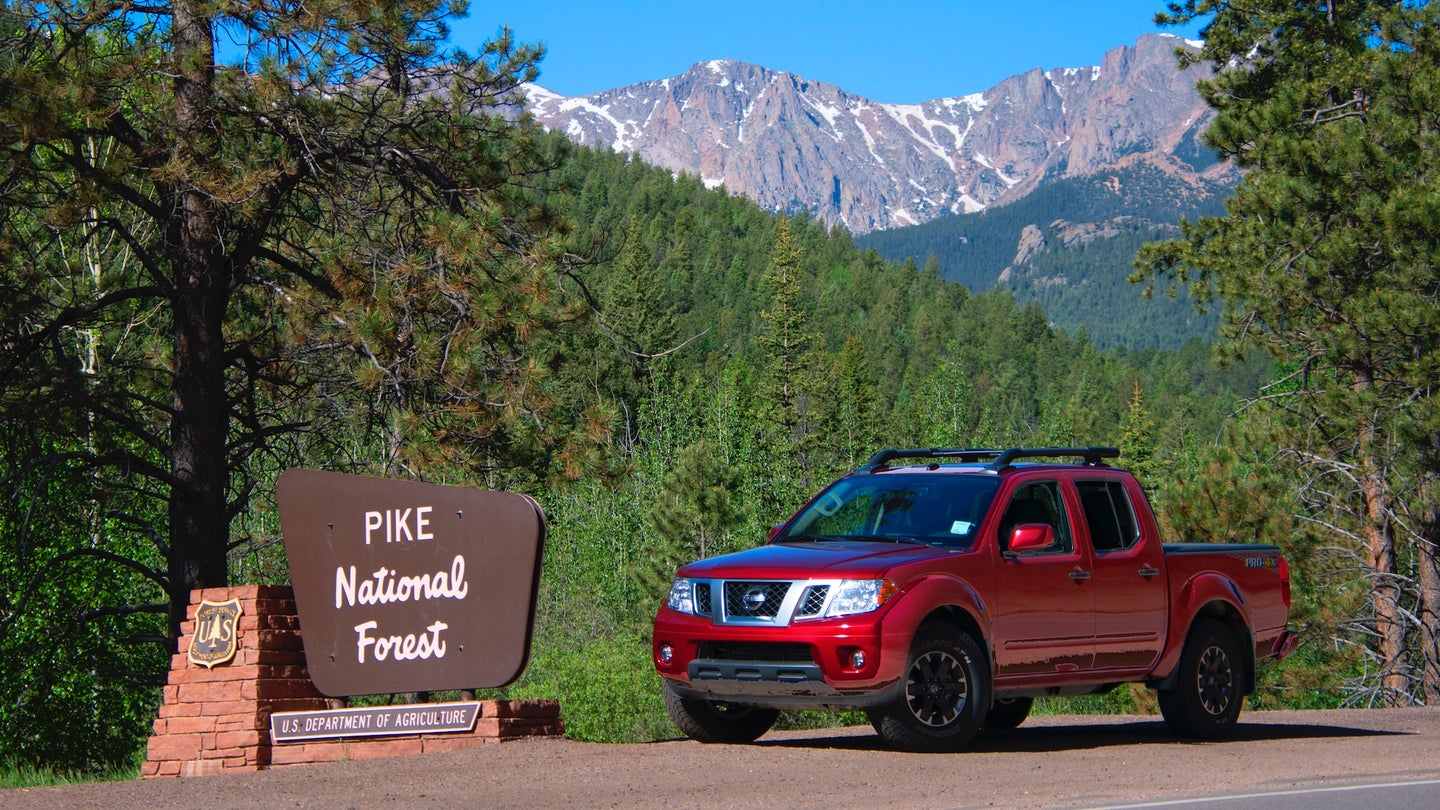 The current Nissan Frontier is so ancient that you could've driven one to Blockbuster for the midnight release of Halo 2. Since then, the midsize truck market has changed about as much as the Halo franchise. And yet the Frontier has remained mostly static throughout, a ceaseless constant save for a 2008 facelift. Nissan's rationale is that as the cheapest pickup you can buy with a warranty in America, the Frontier is a good deal, and one worth keeping around.

That might apply to the base model, but it's not necessarily true of the whole Frontier lineup. Take the pricey Pro-4X off-road trim, which is supposed to hold its own against mavens like the Toyota Tacoma TRD Off-Road and notable newcomers like the Ford Ranger FX4 and Jeep Gladiator. Pricing is similar—all three start around $34,000 in crew cab form, and Nissan's typically generous incentives are hard to come by on the Frontier Pro-4X. So the value angle is gone, and what we're left with is a fine old truck that just doesn't measure up to the modern competition.

The 2019 Nissan Frontier Pro-4X, By the Numbers

Though the Nissan Frontier's 2008 update means that it looks young-ish for its age, your neighbors still might see your shiny new 2019 Frontier in the driveway and ask if you can help them buy a used truck as nice as yours. Even the parts of the Frontier that have aged well—the clean, six-spoke wheels, and its overall smaller size—are undone by the truck's plastic-fantastic interior that's straight out of the mid-Aughts.

Noted by Edmunds as "average" back in 2004, the Frontier's cabin hasn't changed much for the better (if at all) in the intervening fifteen years. Its plastics resemble those of cheap outdoor toys in both sight and touch. A mere 7,000 miles was all it took to stretch and loosen the upholstery on our tester's embroidered, power-adjusting seats, which aren't even that comfortable to begin with. The lack of a push-button starter is either a pain or a delightful throwback depending on your point of view. It's the worst interior for the money in the midsize pickup class given this particular Pro-4X's $36K price point; the Ford Ranger gets some guff for also being an older truck, but at least it has comfy seats.

All the Best Tech of Yesteryear

It's unfortunate that the fun off-road parts you get with the Pro-4X—Bilstein shocks, skid plates, and a locking rear differential—also come saddled with now obsolete tech. Forget Apple CarPlay or Android Auto (there's only one USB port anyway). The standard NissanConnect system's highest-order functions like built-in navigation are bested by a smartphone in the cupholder, making its inclusion feel like an added cost with no value. As the Pro-4X needs to play the discount angle to stay relevant, it should really skip the half-measures and stick with simplicity to bring the price down. Let buyers toss the Pro-4X package on a Frontier S with manual crank windows. Yes, they still sell those.

Nevertheless, there are some comforts. The Frontier's premium Rockford Fosgate stereo remains capable of hitting the high notes in its old age. Dual-zone climate control is a welcome amenity—one that's a pricey extra on the Ranger and Tacoma—as are the heated front seats. The there-by-law backup camera is helpful whether you're squeezing into a parking spot or backing a couch into the county dump. This is all pretty standard.

A Mountain Goat with a Long Beard

The 2019 Nissan Frontier Pro-4X remains competent at truck stuff—hauling and towing—despite its advanced age. But so do all the Frontiers, down to that vaunted sub-$20K pickup, so the Pro-4X should really be evaluated when the going gets tough. It'll keep steady footing on all but the worst surfaces with its 31.6-inch all-terrain tires, four-wheel drive with low range, and a locking rear differential. Together these will pull you out of any mud pit the Rocky Mountains' unpredictable, summer rains can muster, even if it's halfway up a hillside—that's what Hill Start Assist is for. And the Pro-4X's Bilstein shocks and full-size spare mean it can still withstand a bit of idiocy.

All that considered, the Pro-4X is more at home the further away you drive it from yours. The truck's age brings a lot of problems to the fore on the road, but it also makes it a lot more engaging overall to drive than most of the floaty midsizers, feeling less removed from the chaos of the road beneath. That's not to say it's uncomfortable; the Bilstein shocks actually nail the balance between drivability and durability in providing a fine ride and confident handling. The Frontier is just cut from a different cloth than anything developed this decade.

Outward visibility is fantastic—there's your 360-degree camera—thanks to the cabin's lower beltline, making it easy to place the truck in an off-road situation or a particularly tight parking lot. Its smaller size also shines in both situations, and you'll notice a reassuring weight to the older steering rack. Throttle response doesn't betray its early drive-by-wire nature, even if the V6 is better at making noise than producing rapid acceleration, and the Frontier's brake feel has many modern trucks beat. Fuel economy isn't great, in part due to the five-speed automatic, but it's on par with the Ranger and Tacoma and not exactly the highest priority for off-road pickup buyers.

That said, much of its charm comes from a subjective love for anachronistic machines. Anyone looking for a truly new experience behind the wheel won't find it here. Unfortunately, nor will they find much of a compelling reason to buy one when you get down to brass tacks.

On its own, the 2019 Nissan Frontier Pro-4X isn't a bad vehicle. It handles everything you can ask of an off-roady truck, from towing Airstreams to gallivanting through actual streams and being a decent drive all the while. But the Frontier Pro-4X doesn't exist in a vacuum, and sitting at the same price point as more capable and compelling offerings from Ford, Jeep, Toyota, and GM does it no favors. They say age is but a number—and so is $34,290. Outside of the questionable charm of an old-feeling truck with a warranty, there are very few arguments to be made for dropping that money on this truck.

However, there is an argument for a lightly-used Frontier Pro-4X—remember, it's always the same truck— or for playing hardball at the dealership, especially as the completely new 2021 model drops next year. Let's hope Nissan finds its stride again with that one, because it has a lot of ground to make up next decade.