Truly off-road-ready SUVs and pickups are a shrinking niche in America, but Nissan's foreign legion remains relevant in Africa and beyond. 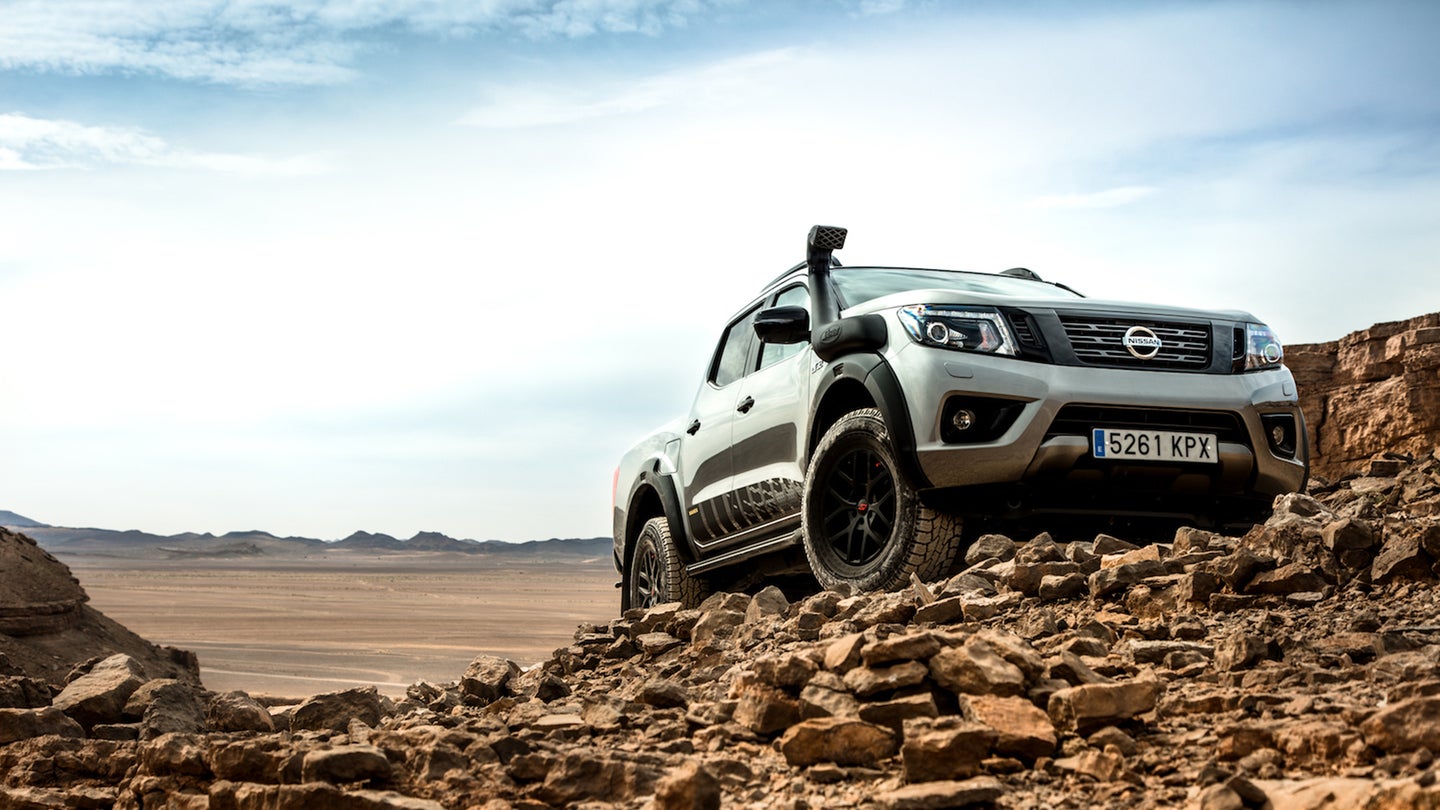 Venture anywhere outside of the United States—say, to Morocco and the Sahara—and you’ll find people who take trucks very, very seriously. Where many Americans buy pickups and SUVs as family haulers or lifestyle accessories, international buyers typically don't have the luxury of pumping pricey fuel into an oversized, over-capable truck. For them, it’s more about the right tool for the job.

That cultural and showroom divide, and the intriguing overlaps, came into focus when I hop aboard Nissan's three-day truck expedition in Morocco, including trips across the Sahara sands and the Atlas Mountains that form a 1,500-mile bulwark across North Africa. Our body-on-frame brigade includes just one U.S.-market vehicle, the Titan pickup. But while us Yankees may not be familiar with models like the Nissan Terra, Patrol, and Navara, the rest of the world surely is: They're part of Nissan's "Light Commercial Vehicles" division, which sells about a million trucks and vans a year around the globe, from China and Southeast Asia to the Middle East and South America.

After an overnight flight to the city of Er-Rachidia, and a landing on its cracked-asphalt runway, our bleary crew immediately sets south for Kasbah Hotel Xaluca Erfoud, a desert oasis a short hop from the Algerian border. Er-Rachidia itself boasts a military background, as a former outpost for the French Foreign Legion during that nation’s colonial rule. A group of drummers in traditional Moroccan dress welcomes us, setting the beat and the tone as I peruse an equally foreign assemblage of Nissan trucks.

Our torture test begins on a highway that formed a section of the Paris-Dakar Rally in 2006 and 2007, just before the race was canceled due to fears of terrorist attacks on competitors. Dubbed the "gateway to the desert," this 250-mile section of the Rally was notorious for grueling conditions and the most terrain changes of the race.

To American fans, the name "Nissan" may first conjure images of family Altimas or fearsome GT-Rs. But Nissan has been building trucks since 1935. And the trucks we'll be counting on include the Nissan Patrol, which brings a touch of officer-club posh to our grunt convoy: It was born in 1951 as the "4W Series," a response to the post-war Japanese government’s call for a Jeep-like off-roader to negotiate the country’s devastated roads. (Toyota delivered its first Land Cruiser that same year). It’s still sold as a military vehicle in some nations.

Most of these Patrols never made it to America, but we know its modern offshoot today as the Infiniti QX80. As it happens, I’m driving the Patrol for the first (and decidedly bumpy) leg of our journey, and I’m grateful for its magic-carpet ride and plush amenities—all the things that make it a popular luxury SUV in the Middle East.

Post-Patrol, It’s time for some American cowboy swagger, ably represented by the Mississippi-built Titan Crew Cab in Pro-4X off-road guise. This full-size pickup would be right at home in John Ford’s American West, but it’s equally at home in the similarly barren landscapes of Morocco, including one surprisingly, er, moist encounter. Our expedition route calls for a crossing of a vast riverbed that traces miles of open plain. Only it’s no longer dry, thanks to epic 20-year rains that the surface has struggled to absorb in recent days. Our convoy route has become a vast plain of shin-deep, rust-colored mud, one in which a typical, mall-friendly SUV would manage about 50 feet before becoming hopelessly stuck. For our group of body-on-frame trucks, all with low-range 4WD and adventure-worthy tires, this daunting plain of mud becomes a lesson in off-road momentum: Keep those tires churning, especially when heading uphill, and whatever you do, don’t stop.

The Titan’s 5.6-liter, 390-horsepower gasoline V8 is a real brute—and an underrated V8 in the full-size class, packed in a smooth-riding truck that struggles to get attention in America. Here in Morocco, the Titan’s Crew Cab’s sheer size and power elicits something like awe from our Moroccan guides and foreign journalists, for whom a full-size pickup seems an exotic treat akin to driving a Peterbilt. (I overhear a French journalist extolling the Titan, which he pronounces “tee-TAWN,” and I vow to say it that way from now on).

Yet the things that Americans take for granted in pickups, from its road-filling bulk to that beefy V8 that delivers a (to us) respectable 21 highway mpg, make the Titan a non-starter in every market outside the U.S. That fact underlines both the spoiled status of truck-loving Americans...and that of automakers who feed those wants via a steady flow of cheap gasoline and 24/7 macho marketing.

If the Titan is denied to international truck fans, the Nissan Navara is this trip’s forbidden fruit for Americans who’d appreciate more choices in nimbler, efficient, and affordable midsize pickups. The Barcelona-built Navara quickly becomes my favorite overall truck on this journey, especially in its cool AT32 off-road version, with its twin-turbo, 2.3-liter diesel engine. Available only in Europe, the AT32 is a joint project with Icelandic Trucks, which designs 4x4s for seriously harsh environments. With a raised off-road suspension, skid plates, 32-inch wheels and axle lockers front and rear, the Navara proves an ideal wingman in the rocks, mud, and sand. Its optional jaunty black snorkel lets the Nissan ford water up to 31 inches deep—perfect for one washed-out road we encounter—and also helps keep desert dust out of its engine.

The design of the Navara, which won the 2016 International Pickup Award, is sure to heavily influence an all-new Nissan Frontier that’s slated for America in coming years. And considering the Navara’s decisive edge over its aging American cousin in design, features and capability—from a class-unique five-link rear suspension to an 8,500-pound towing capacity—that new Frontier can’t get here soon enough.

I’m driving this 12th-generation Navara when our convoy makes its dusty way to Jebl Medouar Mountain, where a fortress of man-made walls suddenly rises before us. The ancient walls blend into what the French call a "cirque," a kind of mountain amphitheater with a steep bowl formed by glacial erosion. This haunted place was once a prison where African slaves were rounded up for sale, both to and by Portuguese colonialists. Jailers deposited their unlucky victims behind these soaring walls, backed by forbidding cliffs that offer stunning views of desolate plains below.  In today’s times, this cinematic backdrop has proven more hospitable to filmmakers, including for Brendan Fraser’s The Mummy and Daniel Craig's 007 installment Spectre.

Scenic splendor continues on our second-day route, as we edge toward the Sahara itself. Stops for traditional tea and a lunch at Tisserdmine Oasis are followed by a bucket-list adventure for off-roading and dirt-bike fans: blasting the dunes of the world’s largest desert. This western border at Sahara Garden Dunes is our playtime sandbox, and the Nissans our full-size Tonka toys. But the fun could stop quickly if someone were to undertake an actual desert crossing: From this western edge of the Sahara, the sand stretches unbroken for 3,000 miles to the Nile River and Red Seat to the east—an area of more than 3.5 million square miles. (That’s 16 times the size of France.)

As such, we’re content to surf these nearby dunes and still keep a trace of civilization in sight. Here, it’s the Titan—with its long wheelbase, 2.5-ton bulk, and unladen cargo bed—that requires the most decisive throttle inputs and course strategy to avoid getting stuck and requiring a hard yank from a winch cable. For all these trucks, driving in deep sand is a lot like driving in deep snow: uphill momentum is critical, along with gentle steering and throttle inputs.

On our final day, we cross endless plains dotted with rocky mesas, whose red sand and rocks recall the surface of Mars.  It's seemingly just as unpopulated—until, to my shock, a hijab-wearing woman with two small, very excited children and a hardy dog appear in our path. I spot their makeshift hovel nearby, and realize this family actually lives here, in a place so remote that most Moroccans wouldn’t attempt it. How they live here, and what they subsist on, is anyone’s guess. We hand the family some Nissan t-shirts, candy, and sports drinks —whatever we’ve got on hand—and naturally thank our First World fortune.

I’m driving the Nissan Terra as we climb to another spectacular Moroccan plateau. The Terra is another not-for-America SUV that makes me nostalgic for the days of old-school Pathfinders, Xterras, and other body-on-frame SUVs. Built in five- or seven-passenger styles, the Terra is a popular truck in China and Southeast Asia. And it’s the kind of tough, no-nonsense truck that—aside from the ever-popular Jeep Wrangler—has become a vanishing breed here in the States.

As we near the first paved road we’ve seen for hours, I’m struck by the way that life clings, literally, to this alien climate. I guide the Terra carefully around what appears to be boulder-sized broccoli heads, but they’re actually rocks covered in strange, gray-green lichen. Eventually, we bounce our way onto a road, just in time to slow down for the Royal Moroccan Army, whose soldiers are trailering several tanks—I’m pretty sure they’re old M60s, America’s trusty Cold War defender—into the field for exercises.

Shy of driving those tanks, our international convoy of Navaras, Titans, Terras, and Patrols couldn’t have been any better-suited to our Moroccan mission. The Nissan trucks pass their off-roading tests with literal flying colors: Not a single tire dies due to razor-sharp rocks, and no mechanical issues pop up. As Nissan suggested in a memorable—and memorably wacky— series of ads in the Nineties, “Dogs Love Trucks.” And so do I. But as we approach our own oasis, the Kasbah Hotel, I’m ready for some Moroccan wine, delicious slow-cooked tagine—and a shower.