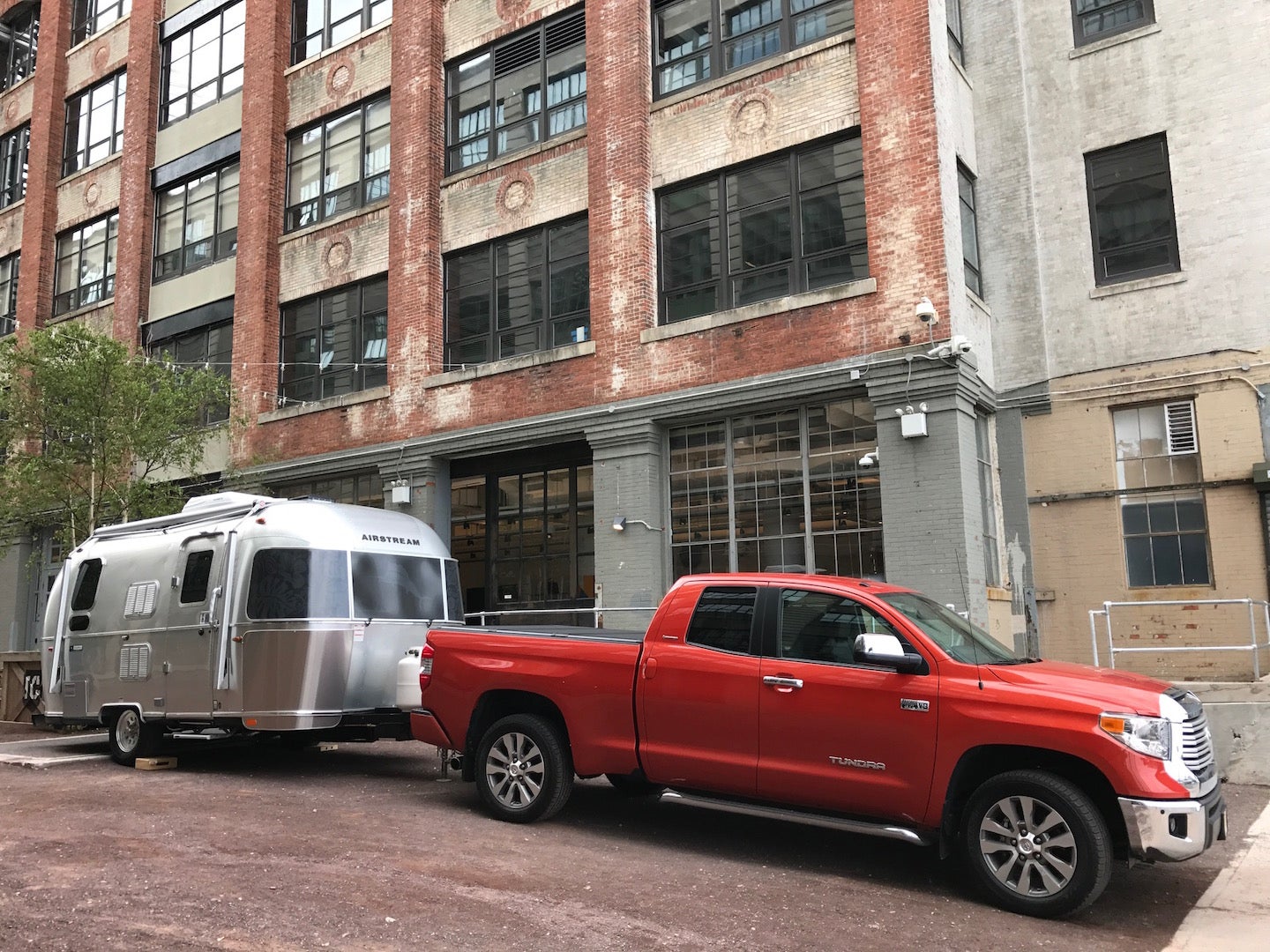 In the world of microhousing, streamlining is key. The less stuff you live with, the fewer things you see, the more livable your space becomes. Any New Yorker knows this. Recreational vehicles, along with small yachts, take microhousing and complicate it further by removing simple electrical and sewage system hookups and adding wheels. These additional complications can lead to either horrific living conditions or brilliant solutions.

The most recognizable example of all RVs is the Airstream, that iconic silver double-ended bullet that has for decades been bouncing down interstates between Yosemite to Yellowstone and Acadia and Disneys on both coasts. The Airstream is also a design marvel, both inside and out. It is to RV life what Formula 1 is to racing: the absolute pinnacle.

At least that's what they tell me.

Today, The Drive took delivery of a 19-foot-long, fresh-from-the-factory-floor Airstream travel trailer. It arrived an hour late after its dogged delivery driver, who'd trucked through the night straight from Airstream's factory in Jackson Center, Ohio, was turned away from the Lincoln Tunnel entrance because of the propane tanks. (That's a crucial note for RV life in NYC: propane tanks, and therefore almost all RVs, are prohibited from passing through tunnels.)

The Airstream rolled into the The Drive’s courtyard just as the other tenants—designers, artists, IT folks, Brooklyn Nets executives, et. al.— were clocking in. They stopped and looked, craned their necks for a look inside. I don't blame them. The stylish blond wood and not-quite-full scale kitchen viewable from the doorway are tantalizing. Like almost all Airstreams, this one is shiny silver, clad in aluminum on the outside. And it is a head-turner. Tenants are used to seeing cool cars at The Drive's HQ—race cars, weird trucks, Bugattis, flocks of 911s. But this Airstream brought the crowds.

New Yorkers have refined microhousing. They live in 500-square-foot apartments that spill over into storage spaces; they stroll through quarter-acre parks and feel as though they're visiting nature. In a well-designed New York City living space, every square inch is thoughtfully considered.

That's why the crowd formed. The Airstream's interior can't be more than 75 square feet. To be livable, it must house my clothing, guitar, shoes, perishable food (as well the implements for cooking it), and all 170 pounds of me. There are solar panels on the roof that should keep a decent charge in the two deep-cell batteries (though not enough to run the air conditioner). There is a full shower and toilet, a three-burner stove, a refrigerator big enough to hold two cases of beer, a bespoke twin bed, a dining area, a 21-inch TV, a nice Polk Audio system that can link via Bluetooth to your phone. This is the Tommy Bahama edition, part of a limited run from Airstream built to conjure a kick back and relax with a tumbler of rum weekender vibe.

It's a small space, and over the course of my month-long curbside sojourn here I'll document all the ingenious details Airstream has thought up. I naturally worry about the water capacity, tending to the "blackwater" tank, and what life will be like during a heatwave, when the Honda generator in the back of the Tundra will be necessary to run the AC.

First things first: Security. This ain't Yellowstone or Acadia National Park. This is Brooklyn. And since this is a travel trailer, it has to be mated to the lovely Toyota Tundra, or else anyone with a trailer hitch-equipped truck could grab it and run. So I buy a lock for the hitch on the truck and another one for the assembly on the trailer.

Tomorrow: How to parallel park an Airstream in NYC.