How to Parallel Park an Airstream Trailer in Brooklyn

The secret: free your mind, ignore the angry horns. 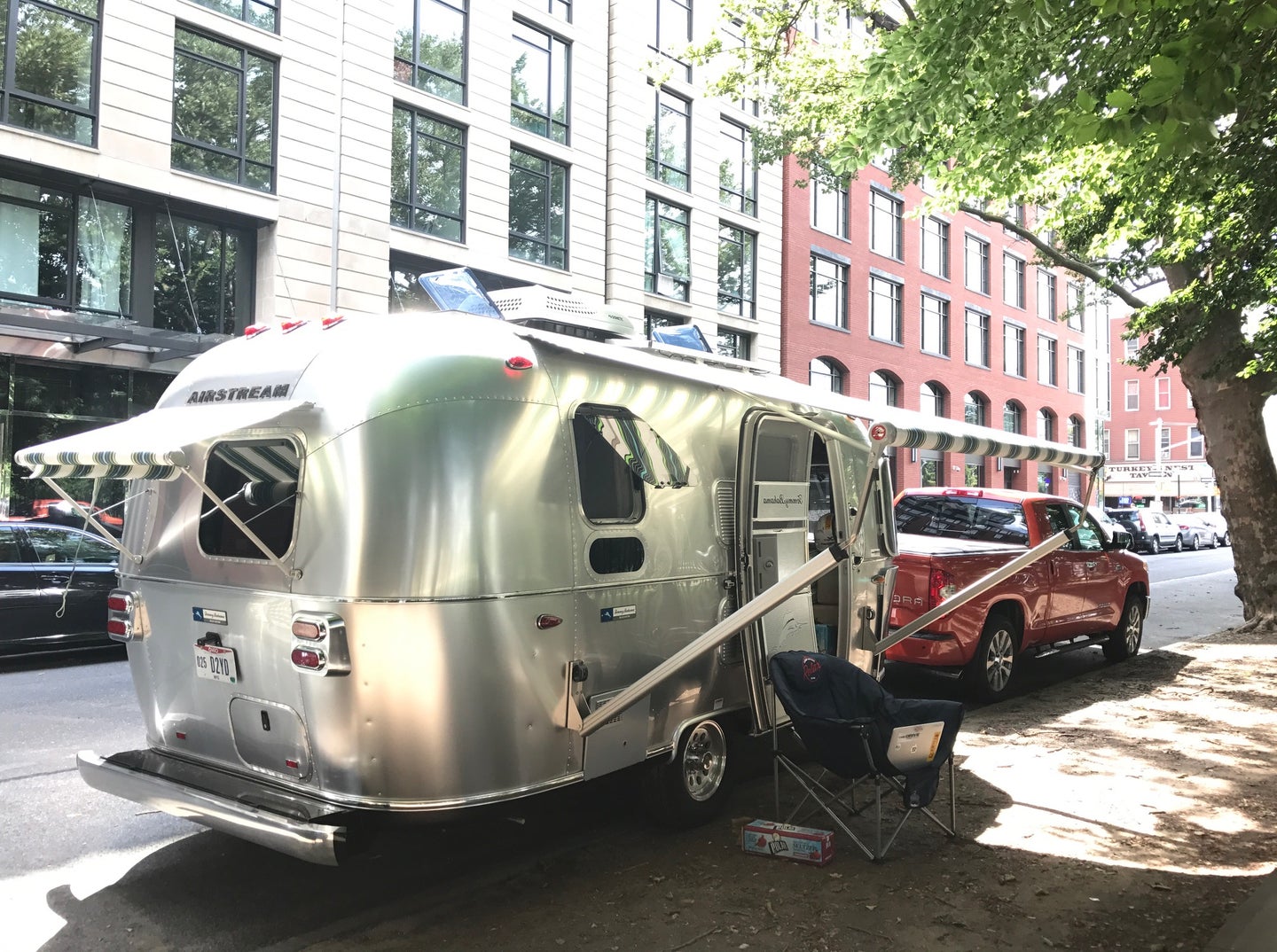 There are many things to love about an Airstream. It is a thing of beauty. It’s curves are timeless. It could have been made in 1917, 2017 or 2117. When I park and sit with the door open to the sidewalk, people ask me if it’s an antique. It’s not. This one came right from the Airstream factory floor to my office. However, like cars, nothing has fundamentally changed about the travel trailer since 1910, when the first Pierce-Arrow Touring Landau debuted at Madison Square Garden—just 6 miles as the crow flies from where I’m now parked.

It is a small living space on two wheels that you tow behind your car. Simple as that.

What is not simple is parking this rig. It is 19 feet long from the chromed rear bumper to the front of the living room, plus another three of trailer hitch, plus another 19 feet of Toyota Tundra up ahead. Maneuvering through a campground is tough. That’s 41 feet of vehicle, with a slippery pivot point right in the dead center of it.

Yesterday evening, I had to find a way to insinuate my trailer and truck into a 50-foot space along a park in North Brooklyn.

Have you ever ridden one of those trick circus bikes with the opposite-steering handlebars? It’s basically impossible. You pedal along and then the second you try and turn you fall onto your face and everyone laughs. This is similar, except no one is laughing.

I began by adapting the general concept of parallel parking: Pull your vehicle parallel to the car in front of the space, reverse straight until you’re in line with the parallel vehicle’s rear bumper, then turn in, etc etc. I’m damn good at parallel parking just about any car.

But in this scenario, you have to remove all vision. The side-view mirrors of the Tundra can’t see behind the Airstream (though there are camera setups available; I highly recommend you get one). Also, there’s a lot of traffic in NYC most times of the day, and its patience is extremely limited.

And then there’s the circus bicycle effect. I pulled parallel to the car ahead of the car ahead of the space, turned on my hazards, and hopped out to tell the box truck behind me this might take awhile. He was unmoved, and immediately laid into his horn by way of response. The cars stacking up behind him followed suit.

In reverse, I countersteered the Tundra to angle the trailer into the slot—careful not to hit the parked car—make that cars—beside me. Once I committed to the line, I had to go by feel. Turning one way, turning another, watching the trailer react like a 2,000-pound disembodied limb.

The whole thing was a fiasco. The honking of the traffic played in the back of my mind, but the thing I was most concerned about was not hitting any cars or trees (I’ve done that before, thanks). People tried to help, but their directions conformed to the general principles of parallel parking, not the trailer version.

Eventually, I stick the landing. I even managed to prop the curbside wheel atop the curb, the core component of my clever self-leveling system. It's not a junior varsity maneuver though. If you have trouble parallel parking a single vehicle, never try this. You will destroy the entire city block.

I finished, set the stabilizer jacks, deployed my awnings, and turned on the Polk multi-speaker stereo system to relax.