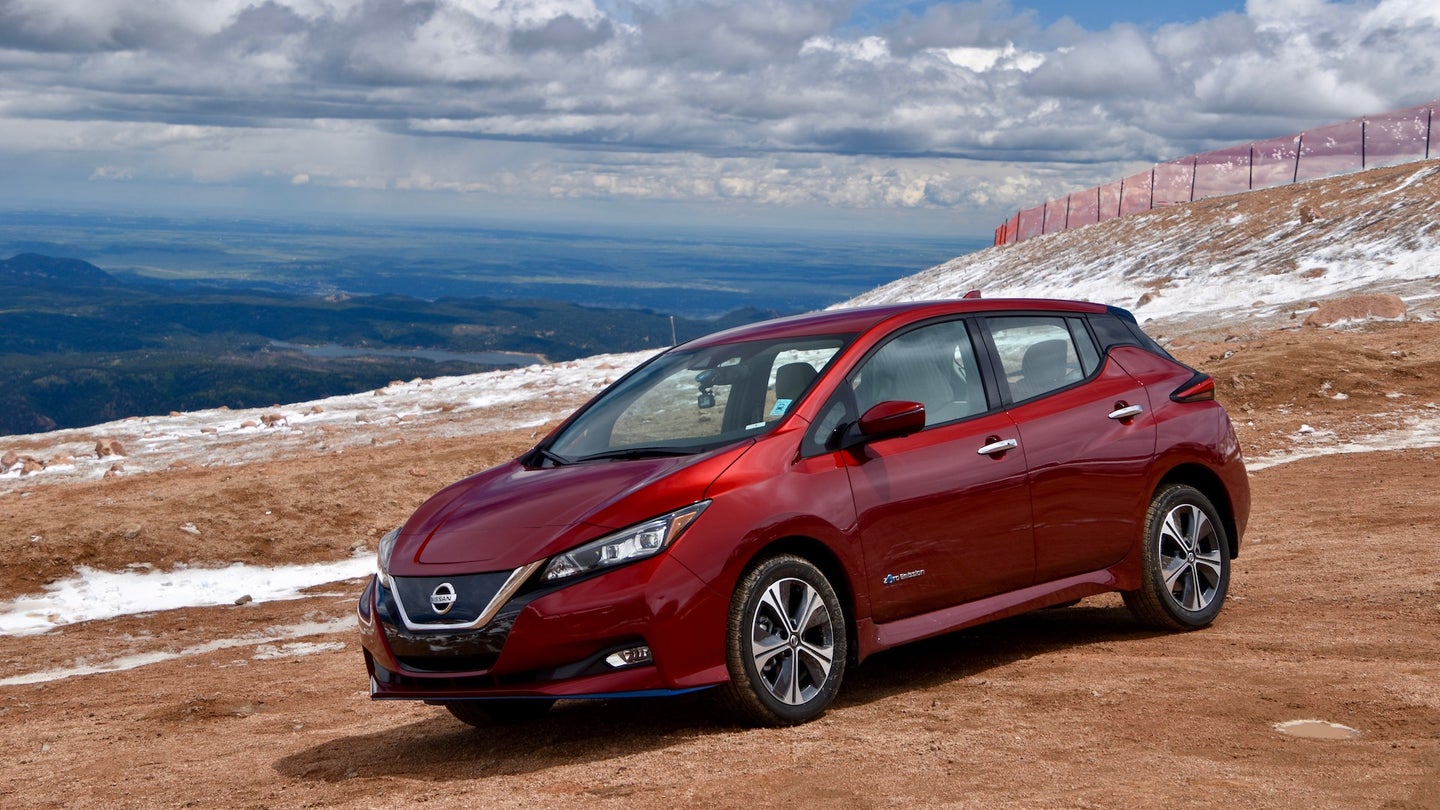 Range anxiety—that nagging fear that your electric car could run out of charge before you reach a far-off, hypothetical destination—is quite real. Studies suggest it affects as many as three-fifths of American car buyers, and automakers are eager to soothe us by boosting the range of their EVs. Some of that comes from bigger, higher-capacity batteries, but the other side of the equation involves capturing your car's kinetic energy via regenerative braking.

So what happens if you really do run low on charge far from home and need to rely on regen braking to bridge the gap? We decided to find out by taking a 2019 Nissan Leaf SL Plus with a low battery up Pikes Peak in Colorado, putting car and driver well out of range of the nearest public charger by the time we reached the top. The descent is a torture test that will show just how efficient the Leaf's regenerative brakes are—and whether the the system can survive 14 miles of continuous use on one of the most famous mountain roads in the country.

See you at the bottom.

The 2019 Nissan Leaf SL Plus, By the Numbers

The redesigned Leaf and its less-insectoid visage has been around since early 2018. But we had to wait until the Leaf Plus arrived on the scene to run this test, needing its bigger 62-kWh battery to make the 234-mile round-trip journey between home base and the Pikes Peak summit, elevation 14,115 feet. We also figured that its more powerful, torquier motor would be better at dealing with both the ascent and descent, during which it'd serve as both a generator and our primary source of braking force.

There are other advantages to life in a Leaf Plus. After plugging directions into Apple CarPlay via the Plus's enlarged, eight-inch touchscreen (indicated range on a nearly-full charge: 208 miles), we settle into an easy highway cruise with the help of the SL Plus-exclusive ProPilot driver assistance system that combines lane centering and adaptive cruise control. Too easy, in fact; before we know it, we've missed our exit by several miles. 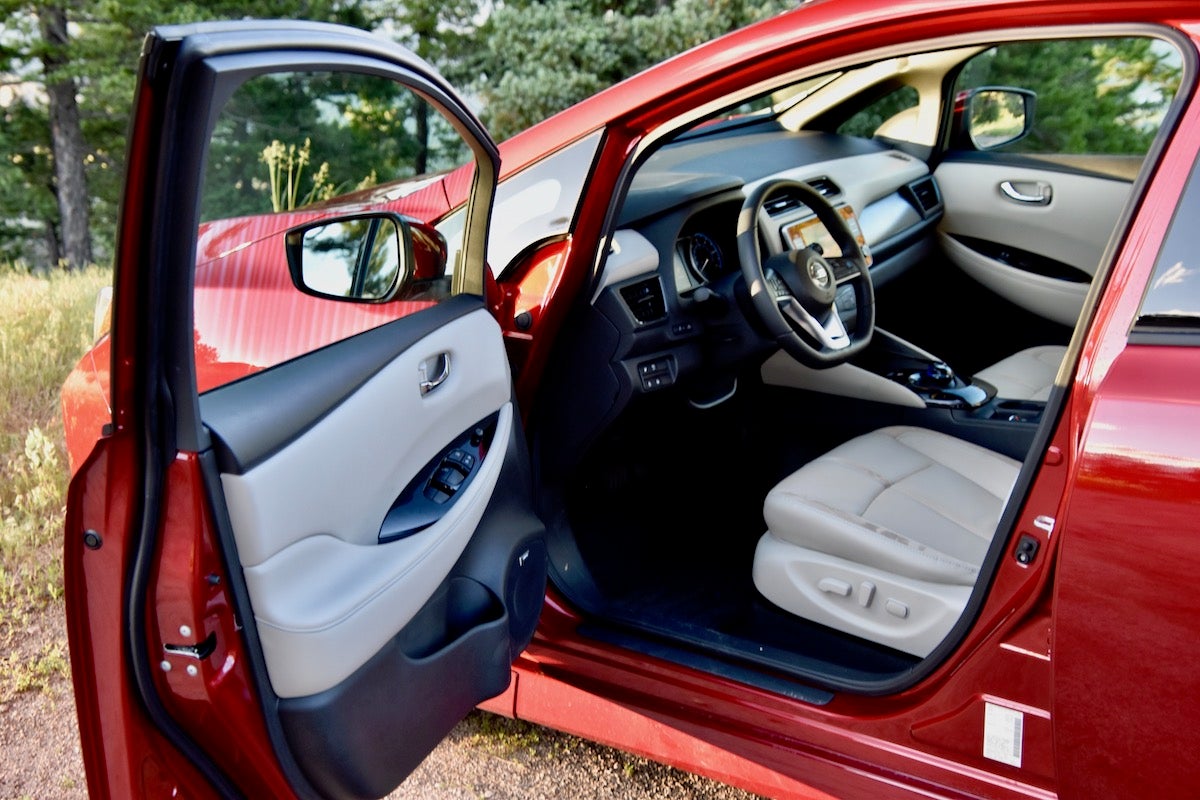 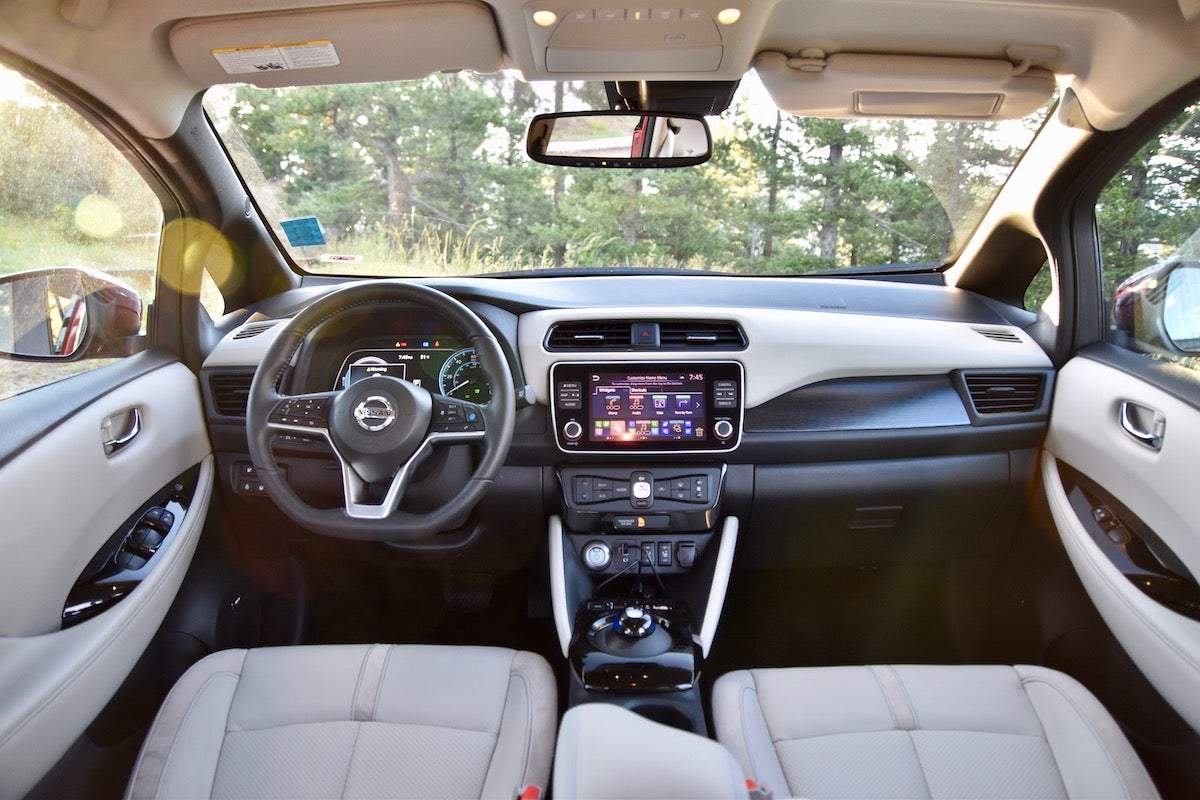 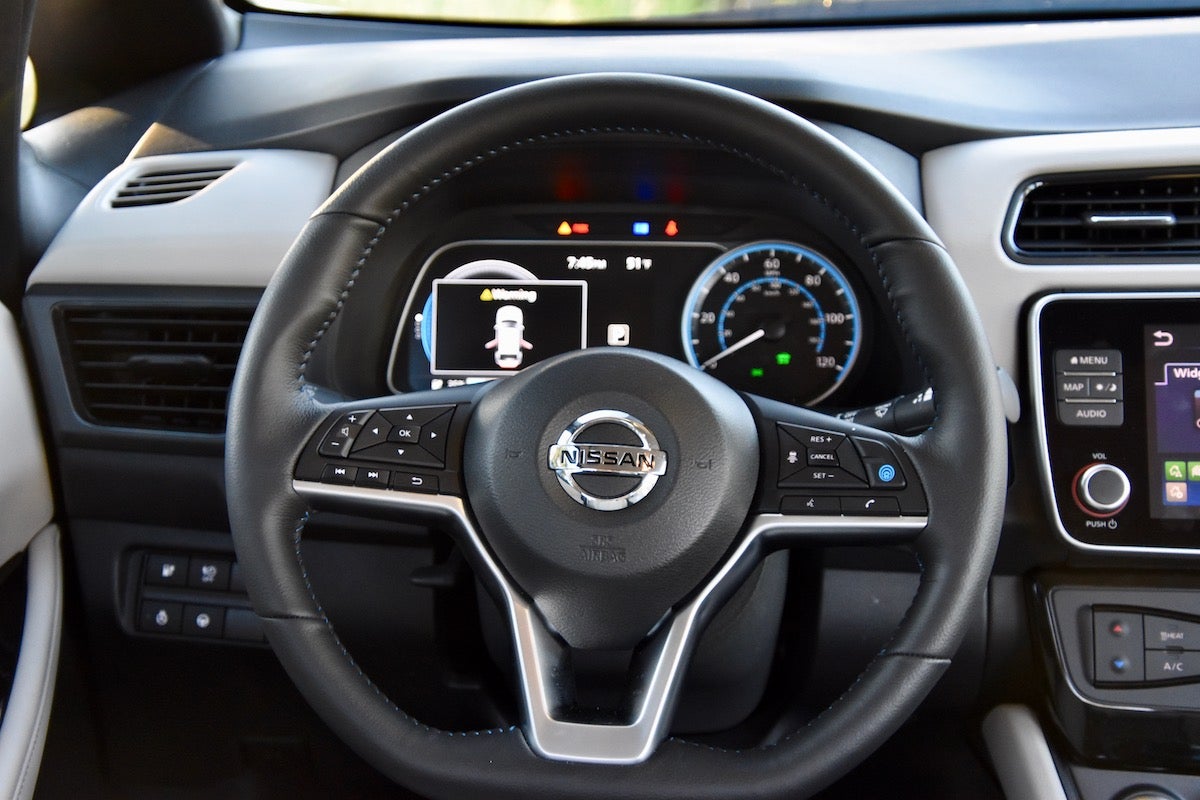 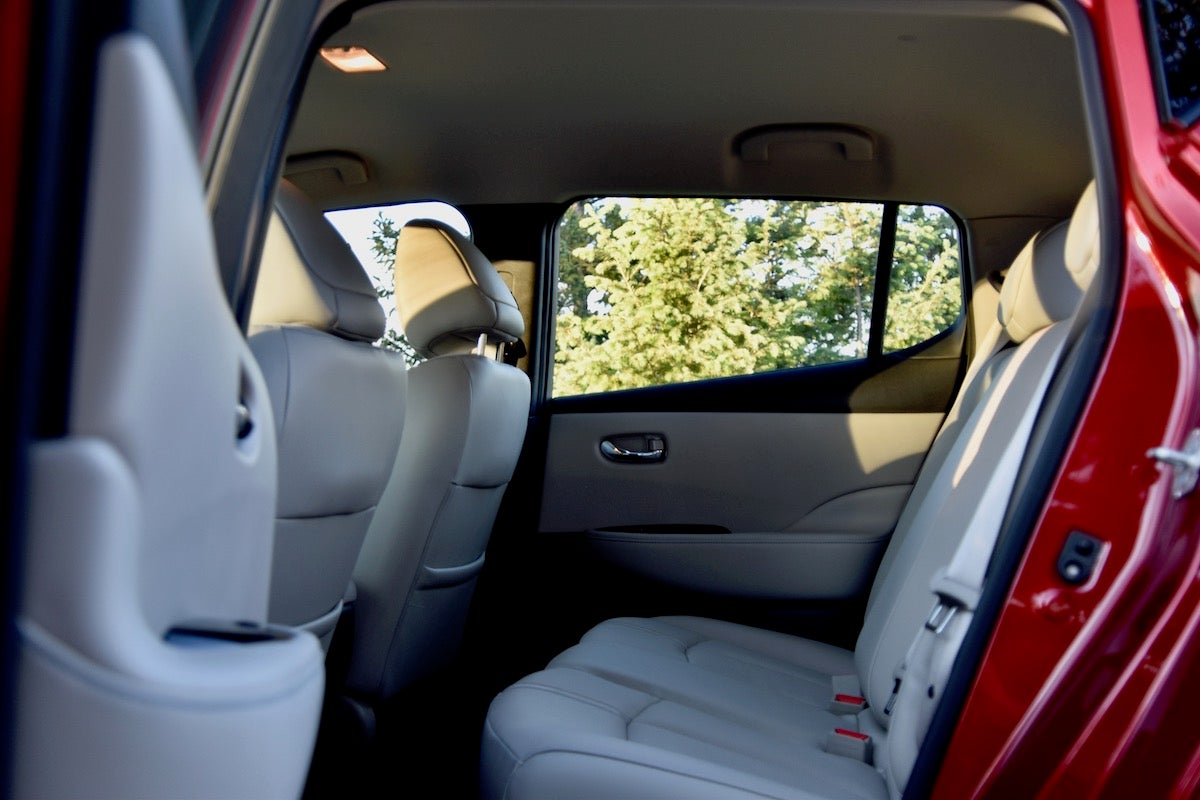 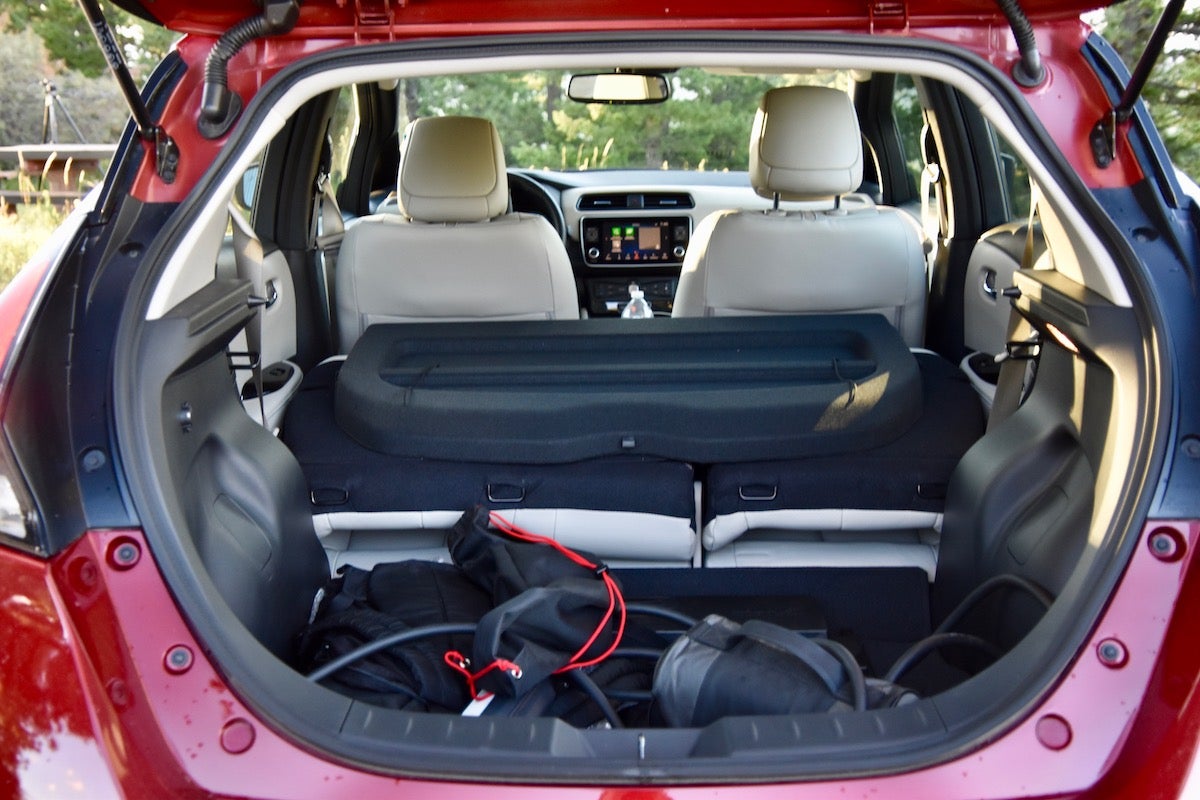 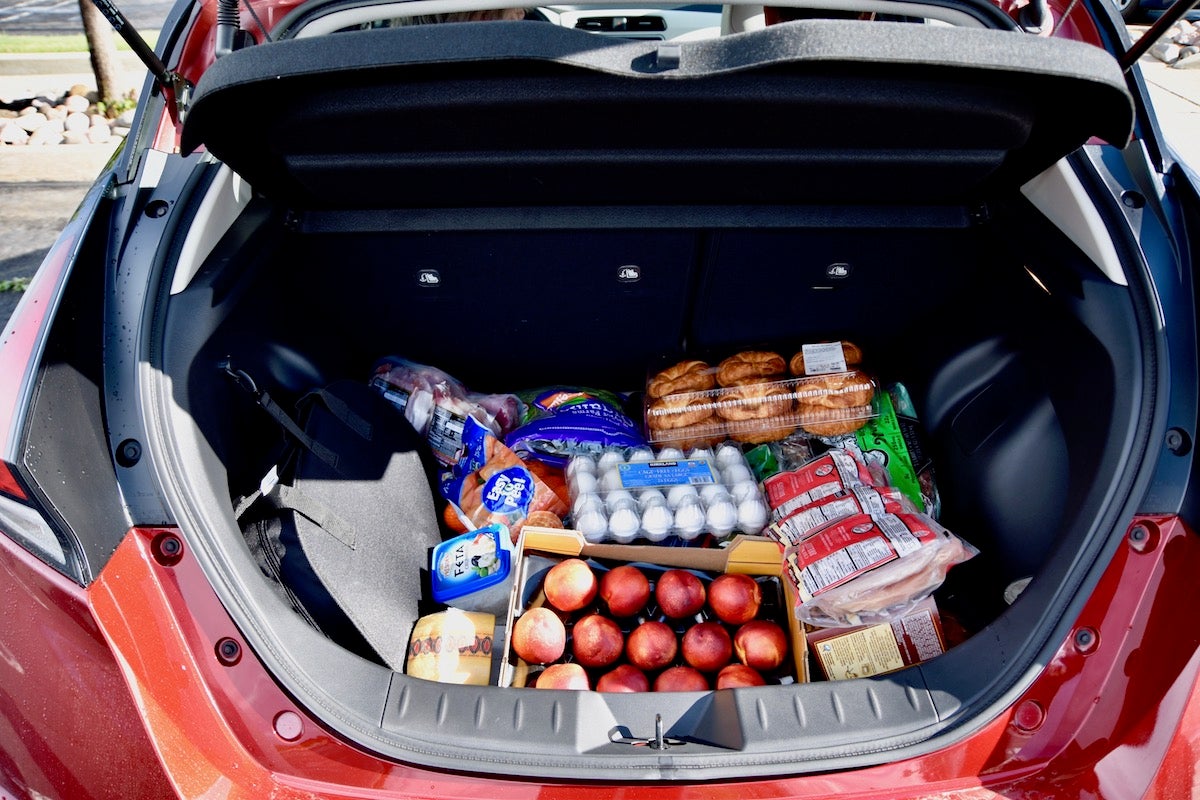 After doubling back from our unplanned detour, we reach the Pikes Peak Highway toll gate at 7,700 feet with just 81 miles of range. A pamphlet distributed by a park ranger worryingly predicts that the drive to the top will burn 80 miles worth of gas. Even if the Leaf won't, the message is clear: energy usage is about to spike. And it does. Despite pinky-toeing the throttle for 14 miles of steep uphill grade, 60 miles of range vanish by the time we reach Devil's Playground another mile in the sky, the highest point open to the public today (the road from there to the summit is closed for repaving).

Sitting there at over 13,000 feet, the Nissan now has just 12 percent battery left, good for an estimated 21 miles. There are 33 miles between us and the nearest fast-charging station. Whether we get home by nightfall now depends on how much electricity the Leaf can claw back on its way down the mountain 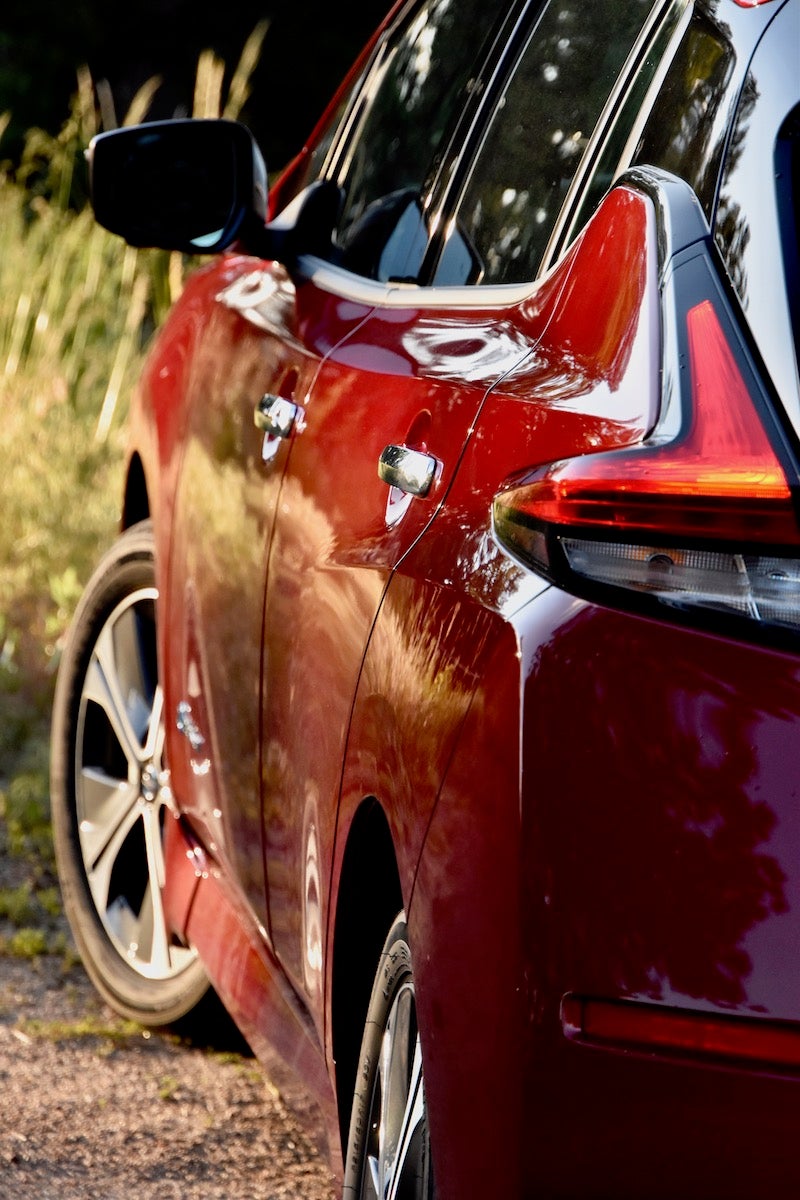 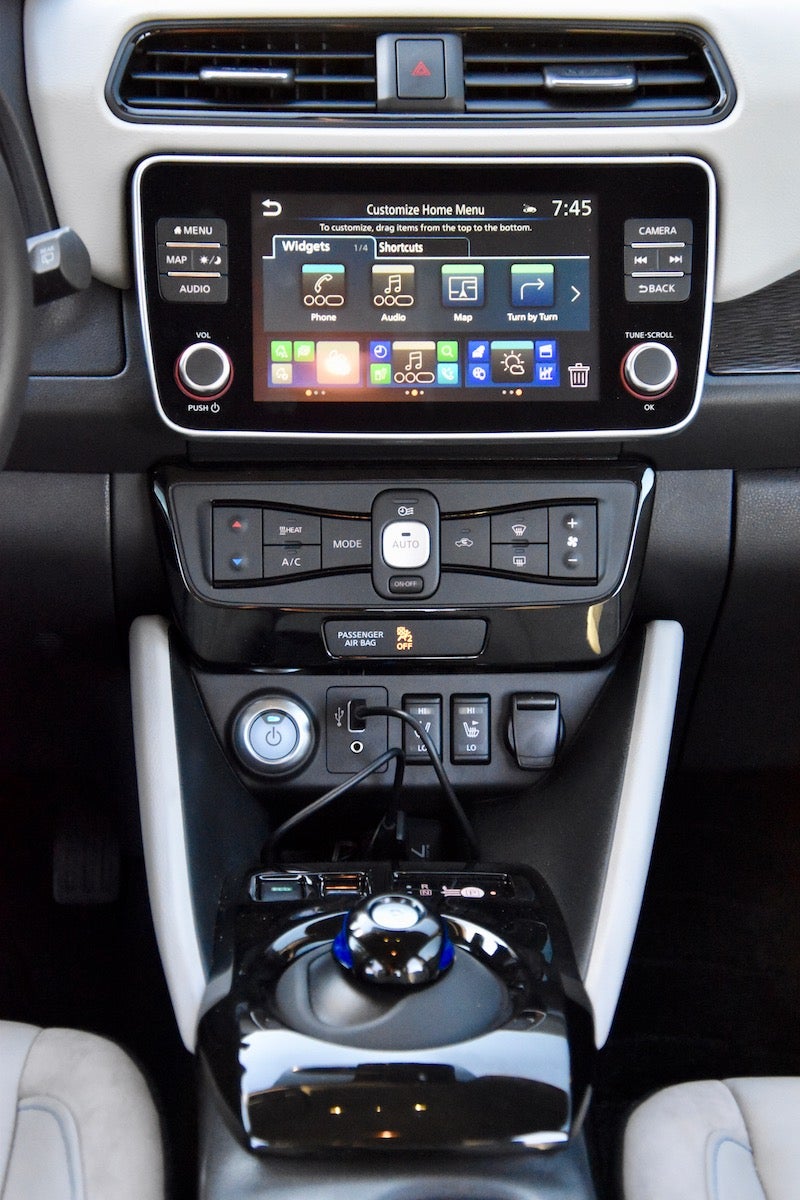 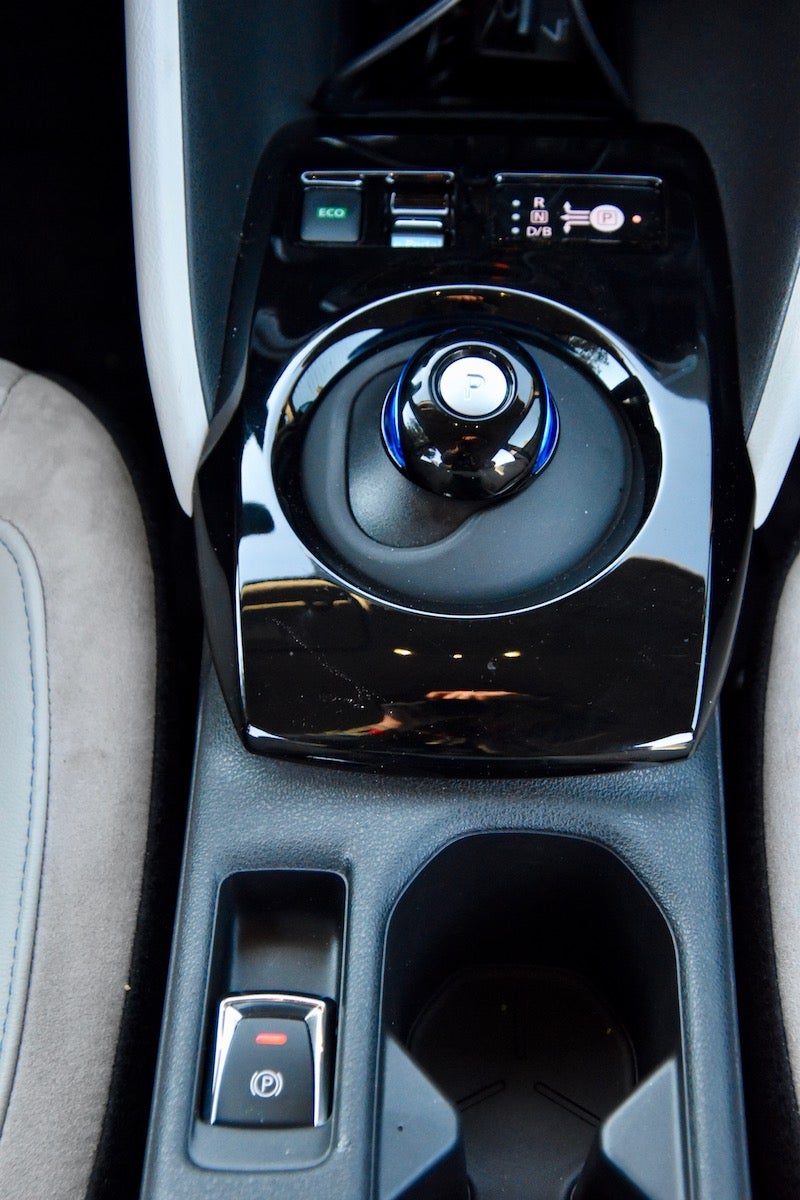 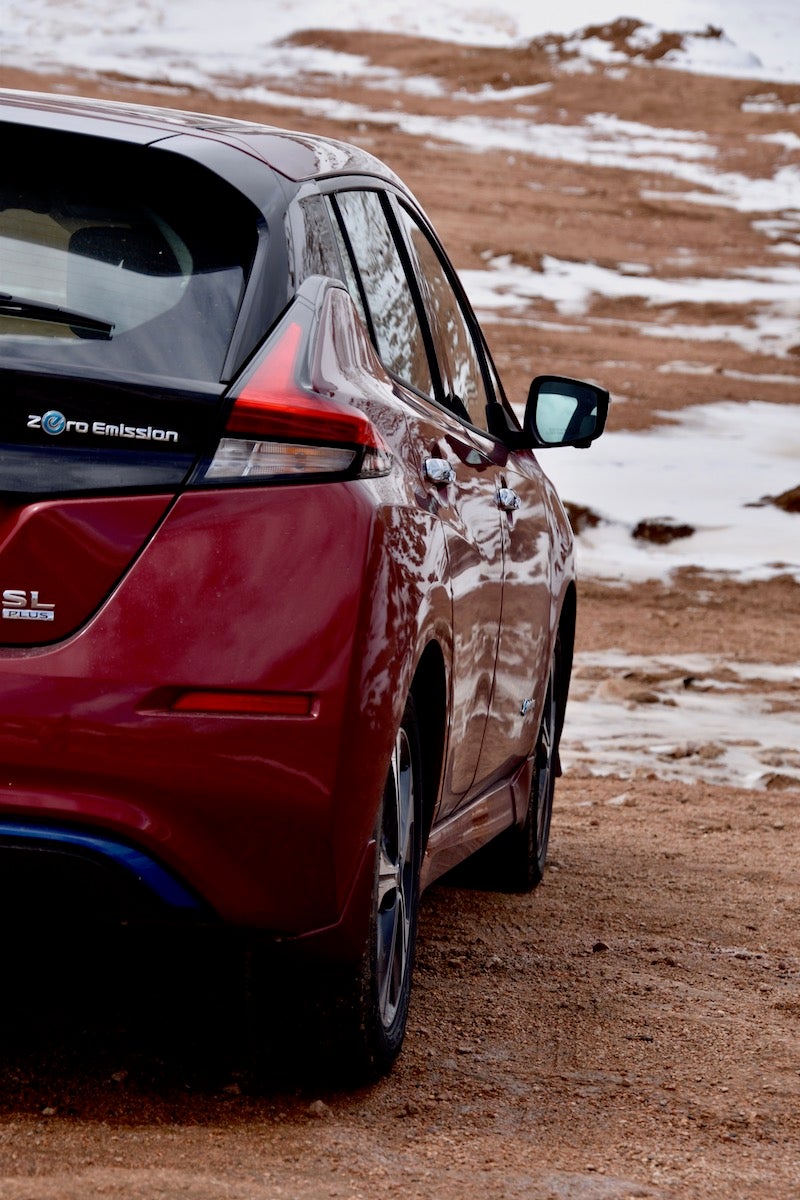 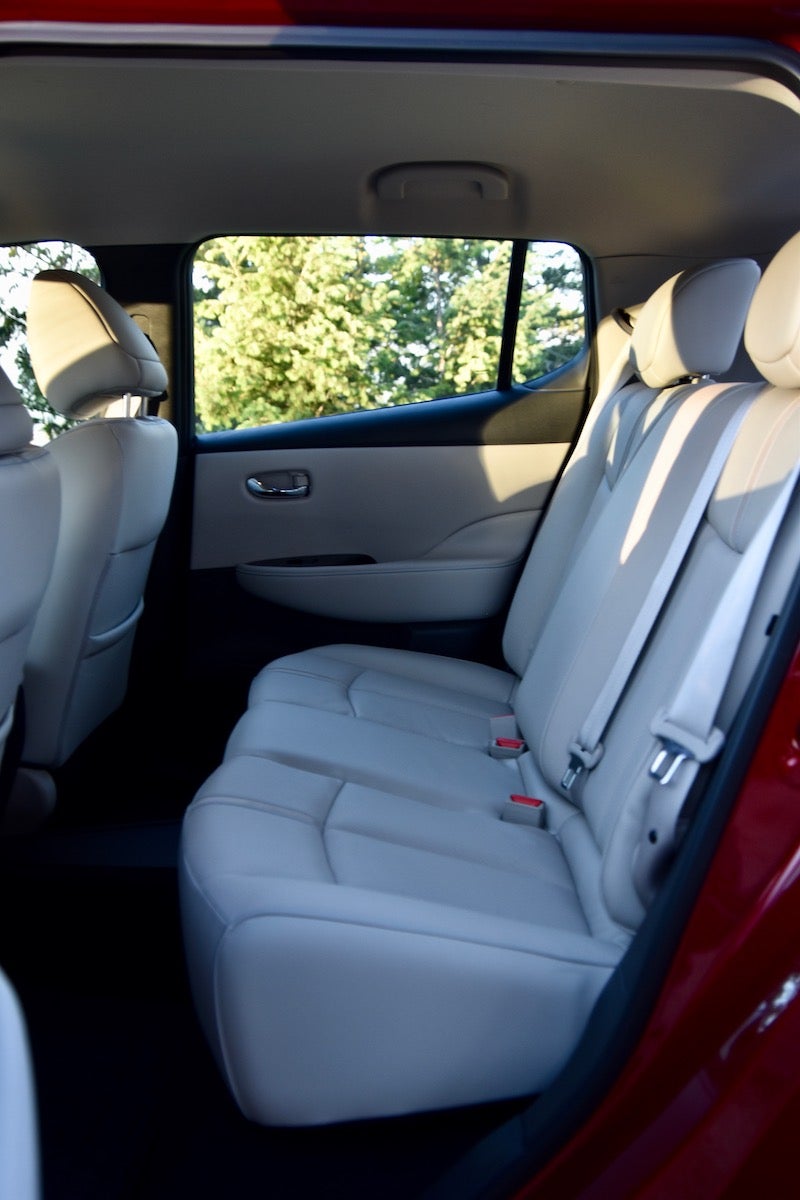 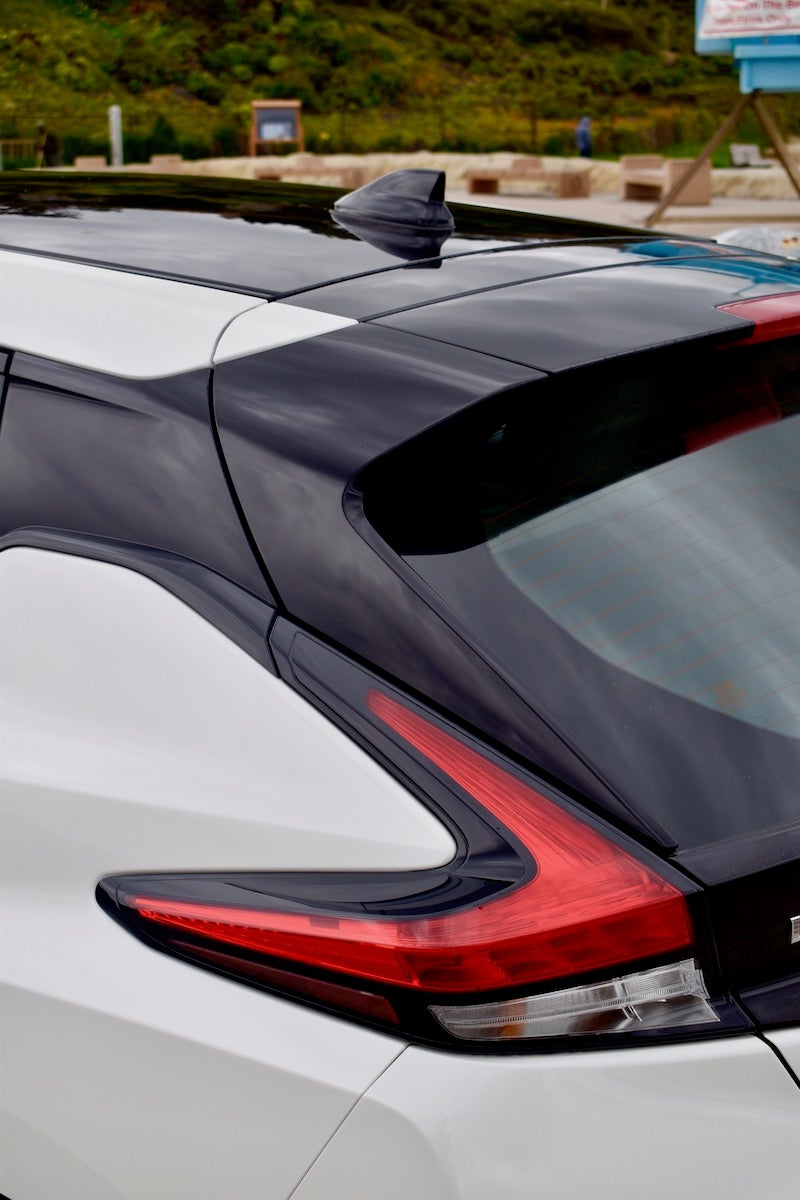 After snapping a few quick photos of the car amid the rocky landscape, we take shelter from the 28-degree weather (yes, in the summer) in the heated driver's seat and prepare for the descent. Step one is to slot the Nissan Leaf into B mode to maximize regenerative braking and activate its E-Pedal feature. It's a true one-pedal driving mode where speed is tied directly to the accelerator position, so you can exercise finer control over energy usage and bring the car to a full stop without ever touching the brakes. It sounds and feels alien at first, but with practice the E-Pedal becomes intuitive, even engaging. It's not unlike a one-speed manual in how it reacts to your foot; you might even find it preferable to multi-pedal driving. 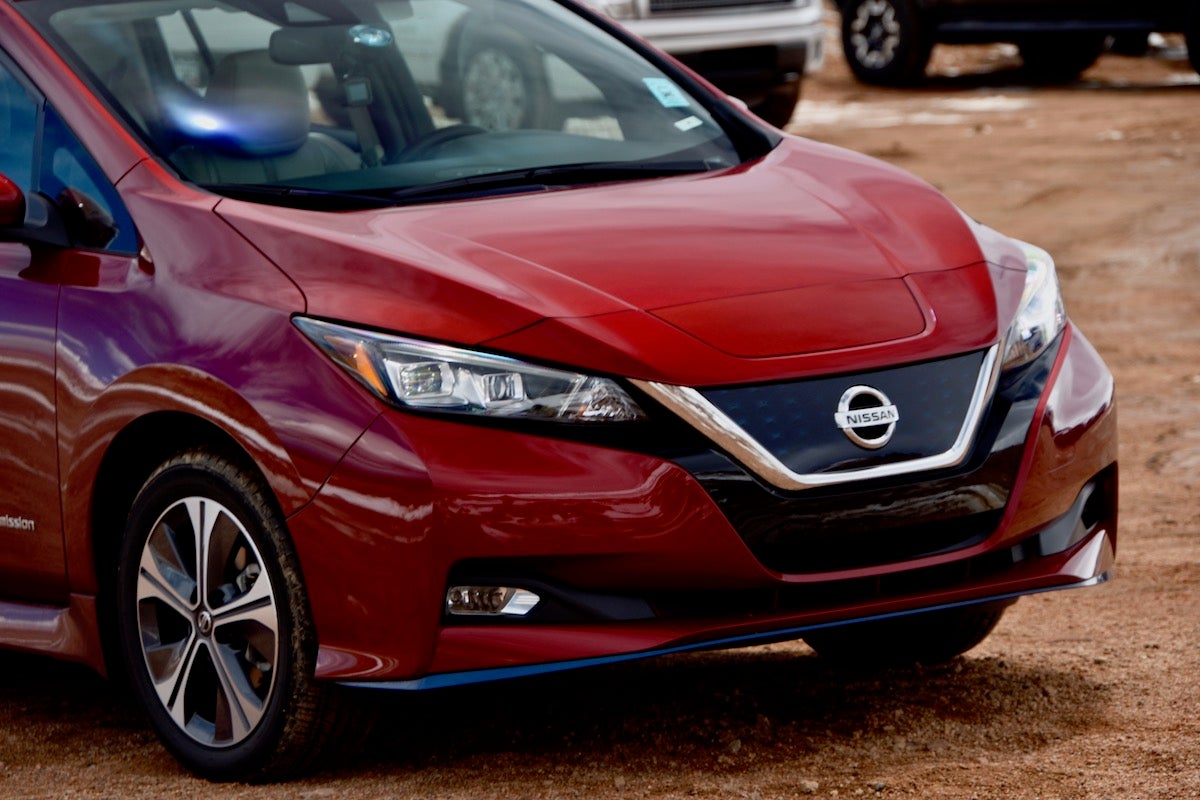 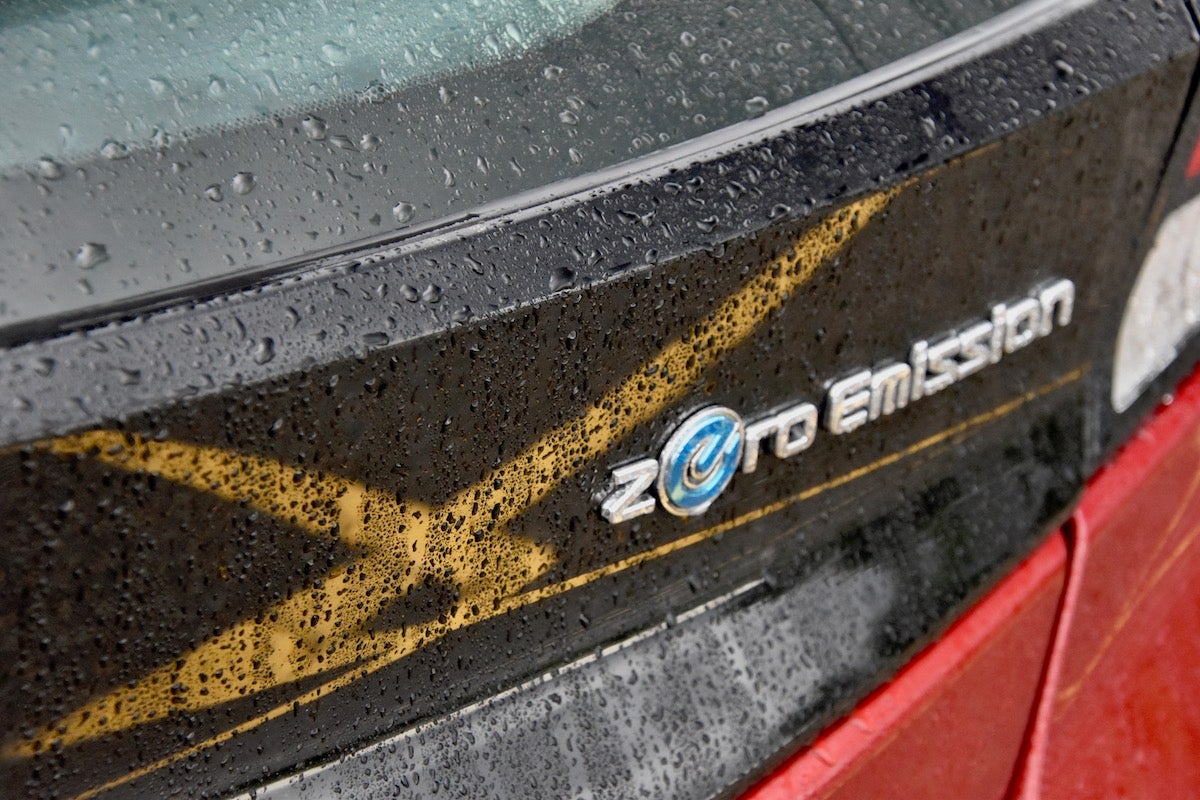 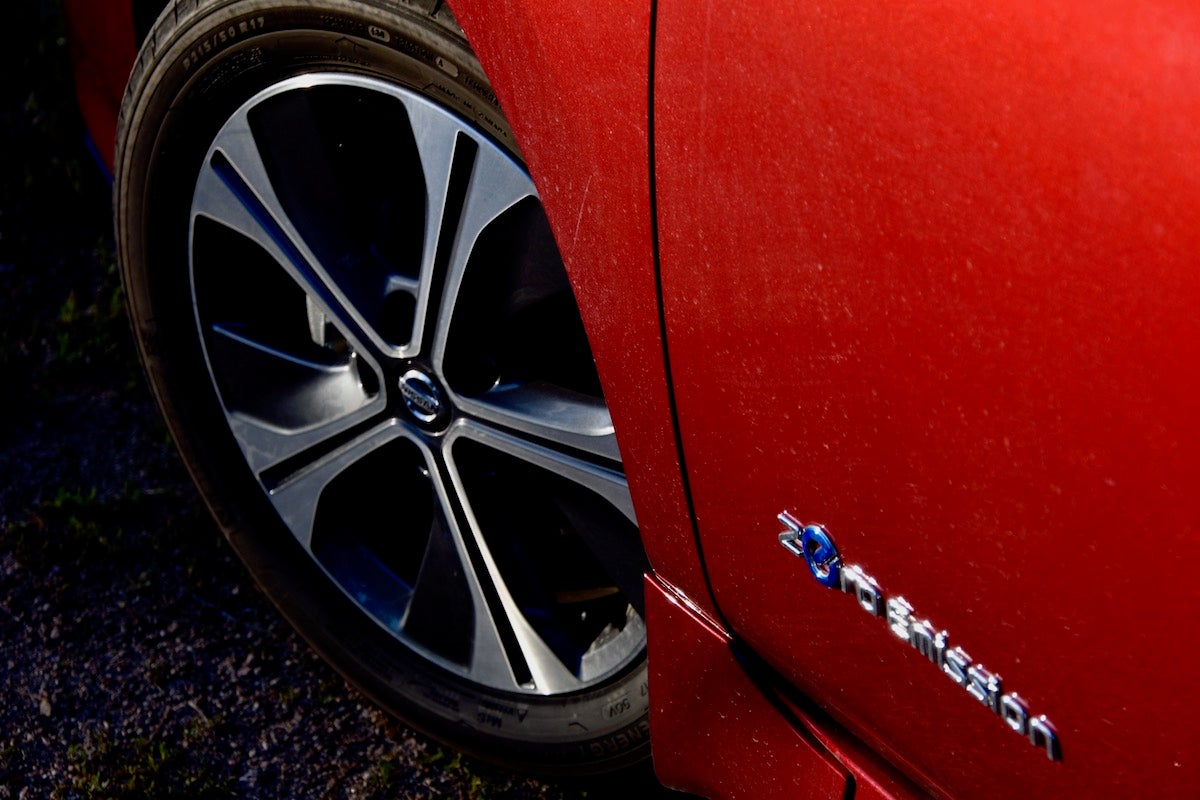 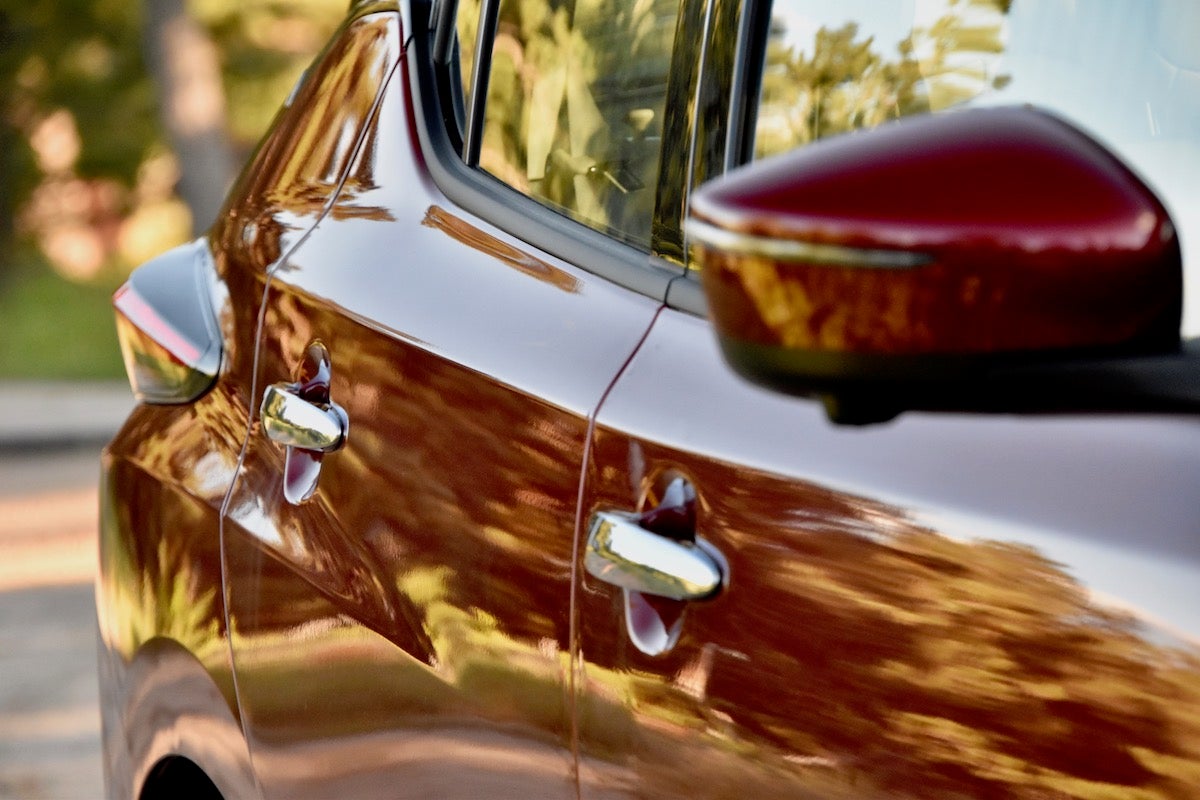 Talk of the Leaf Plus driving like it has a manual transmission sounds like hyperbole, but its accelerator response really does shine here. E-motors are known for their instant torque and reactive nature, and while 214 horsepower and 250 pounds-feet of torque won't win any internet flex-offs, they make the Leaf Plus a lively drive—especially when gravity's on its side. But the Leaf Plus comes up short of a hot hatch on account of its lazy steering, soft suspension, and high curb weight. It may be concentrated in the floor-mounted battery, but 3,853 pounds is still 3,853 pounds.

There's also one big issue with the E-Pedal. Fun as it is for everyday driving, it doesn't mesh as well as it should with the mechanical brakes in high-demand situations. If you've got the E-Pedal active and you need to really slow down in a hurry—say, if you see a park ranger with a radar gun on the side of the road—there's a slight but noticeable delay in brake pedal response as the Leaf transitions between the regenerative and friction brakes. It's the last thing you need when trying not avoid a crash, or a speeding ticket.

Not Even Braking a Sweat

Despite barely using the mechanical brakes at all during the steep, 6,000-foot descent—so little, in fact, that the official checking brake temperatures at the halfway mark takes two readings to make sure his infrared thermometer is working properly—the regenerative system holds up perfectly. The Leaf's temperature gauge also never budges despite the lack of liquid battery cooling. All the while, we watch the battery percentage tick up, the predicted range growing more optimistic with each plunging curve.

A jumpy range estimate is to be expected since the computer is trying to calculate it based on the recent and current conditions it's experienced. What's beyond debate are the battery percentages. We started the descent with 12 percent in the Nissan Leaf's pack. By the time we roll back through the toll gate at the base, that figure doubled to 24 percent with a solid 56 miles predicted. Our passage to the fast-charger is secure. 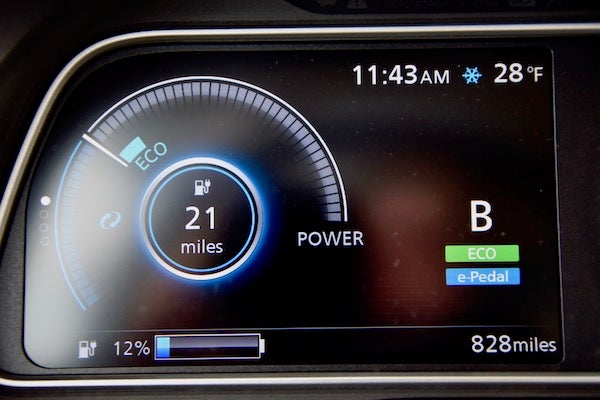 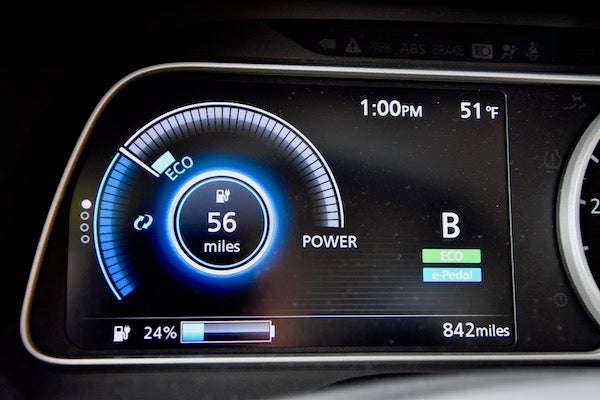 2019 Nissan Leaf SL Plus - Range at Base Camp James Gilboy

Unless you're the one frying the famous donuts at Pikes Peak's summit house, you'll likely never put an electric vehicle through a descent this long. But that's not the point. It's that until the fast-charging infrastructure in America gets up to speed, recuperative tricks like regen braking can really make or break an electric vehicle's max range—and thus its perception as a usable, livable car for tens of millions of Americans. Range anxiety is real—but the 2019 Nissan Leaf SL Plus' performance in this test shows it's also just a state of mind. 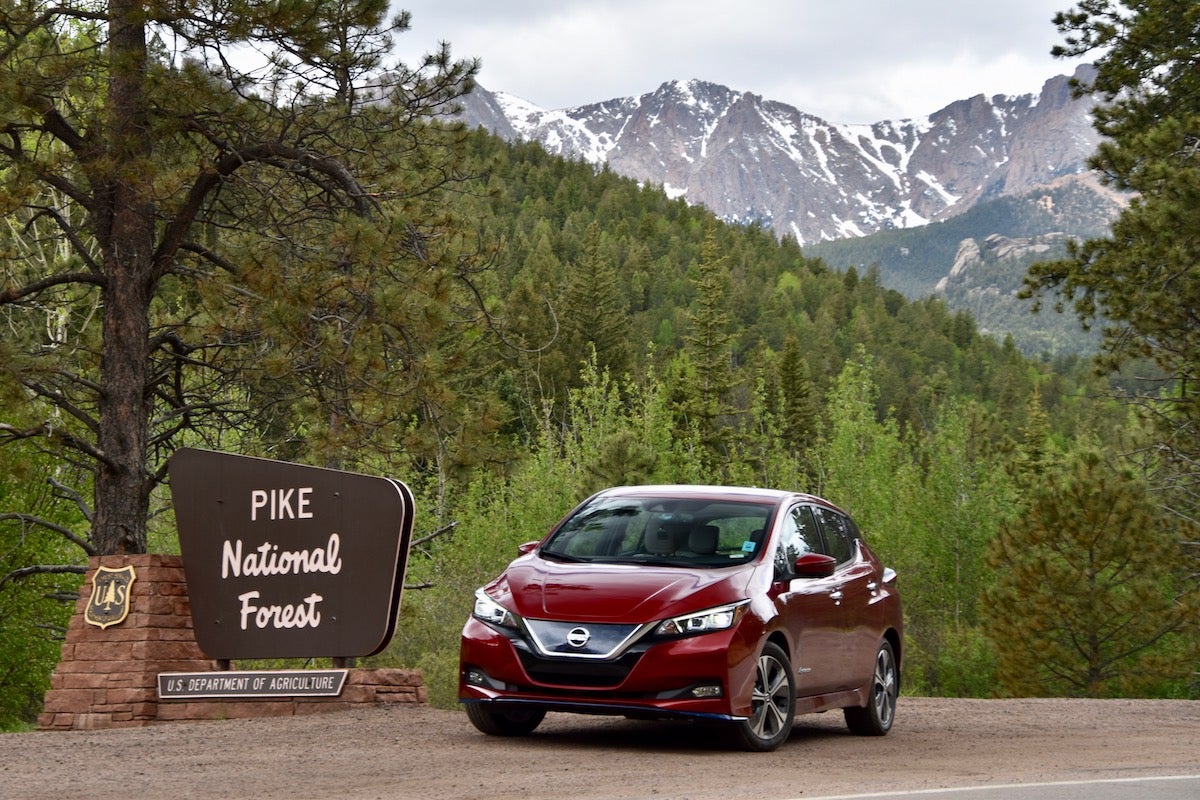 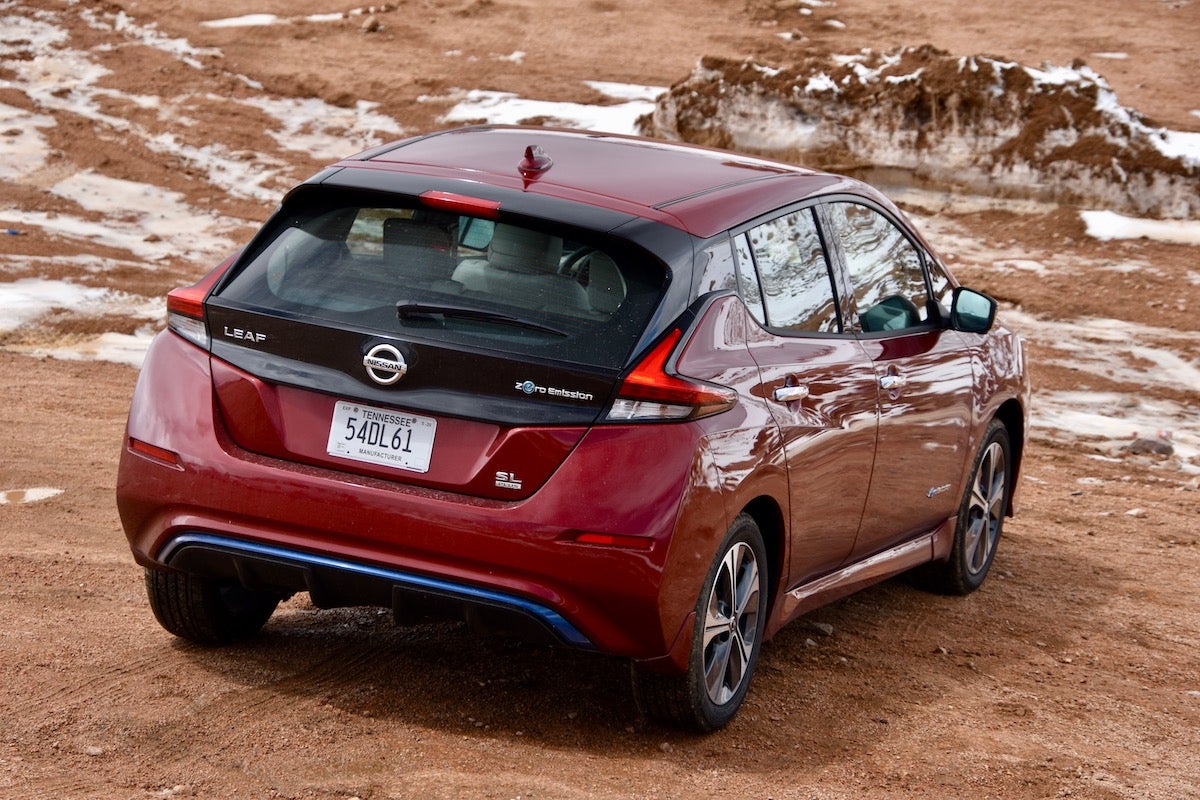