A journey through rural Montana shows the aging Nissan Pathfinder isn't ready to retire just yet. 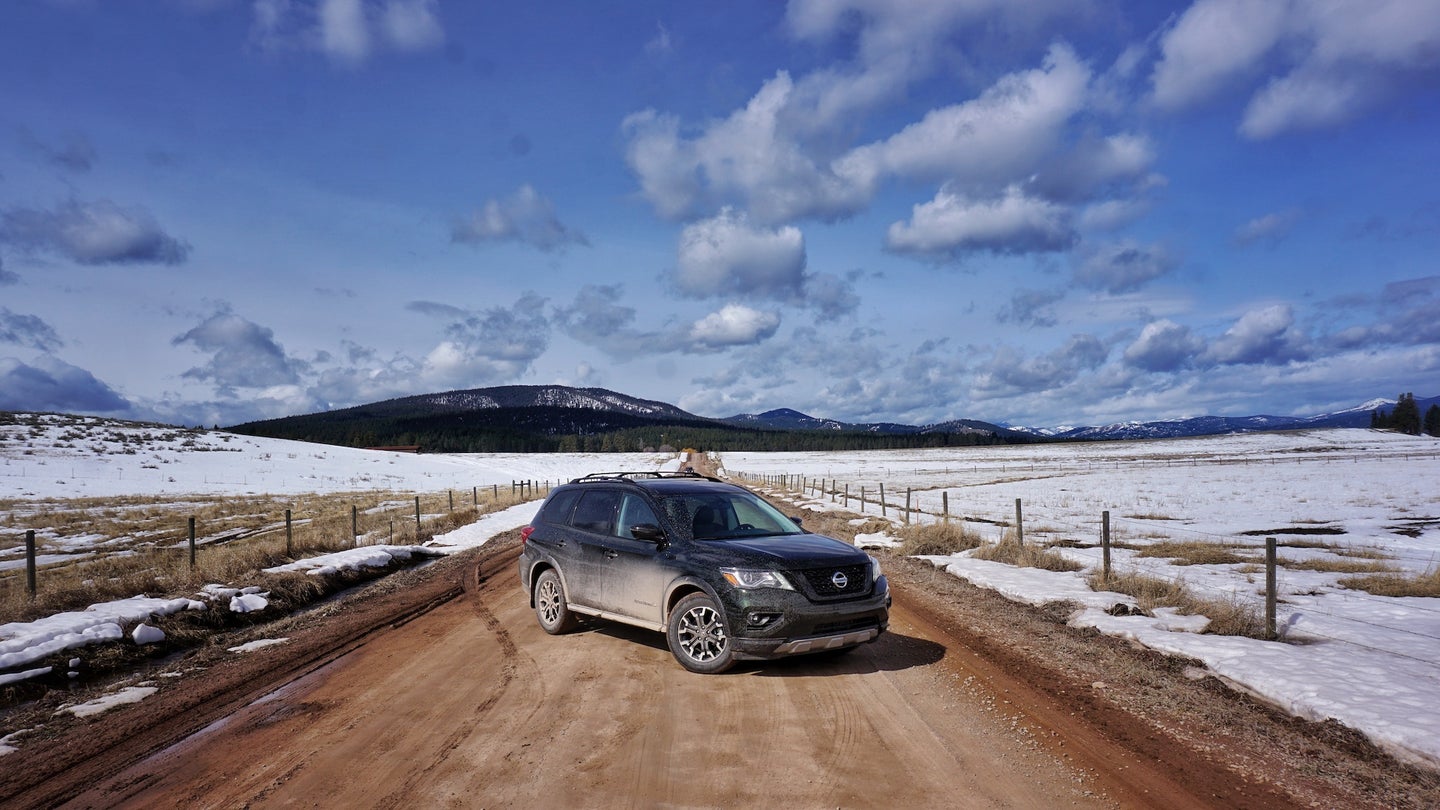 Let's get the obvious out of the way: The 2019 Nissan Pathfinder isn't a new vehicle. What is new is the Pathfinder Rock Creek Edition, an outdoorsy variant for 2019 that hopes its half-rugged looks inside and out will be enough to get people interested again. In a world where people feverishly line up for the next warmed-over smartphone, it might have a point.

In order to experience the "spirit" of the Pathfinder Rock Creek Edition, Nissan invited me to Montana, where I believe the state motto is "Get Lost." There, in the middle of nowhere, surrounded by vast wilderness, I was to drive through terrain originally explored by Meriwether Lewis and William Clark, two names you'll associate with a little-known endeavor taught in public schools: The Lewis and Clark expedition.

From towering, snow-capped peaks to rolling hills speckled with hundreds of bison, the region offered the perfect backdrop for a rugged vehicle, one capable of climbing gnarly hills and traversing through chunky, sticky mud. You know, the kind of ride that makes you wanna say, "'America, hell yeah!" But unfortunately, the Nissan Pathfinder Rock Creek Edition is not that vehicle. There's absolutely nothing found under the hood or chassis that makes it more off-road-capable than the normal Pathfinder. Hell, it's even got plastic skidplates.

So What's the Rock Creek Edition All About?

Mainly, it's all about looks. The Rock Creek Edition gets 18-inch dark-finished aluminum wheels with a cool, heavy-duty look to them (similar to the Frontier pickup's rims), plastic splash guards, a tow hitch, and a trim-specific Midnight Pine Metallic paint that's definitely the standout of the colors on tap. It also gets blacked-out badges and body trim just like in other Nissan Midnight Edition vehicles.

Inside, the rugged theme continues with two-tone leather or cloth seats with Rock Creek Edition badging and unique orange stitching. The new-for-2019 variant is offered in both SL and SV models, and buyers will have to fork out an extra $995 to get the goods. Yes, that's just five bucks shy of a grand, and since it drastically enhances the Pathfinder's looks, it's darn good value. And considering fancy family haulers are crossing the $50,000 line with ease of late, the fully decked-out SL 4WD model I drove had an impressive MSRP of $43,077.

I'll be the first one to tell you that the Rock Creek Edition is not an off-roader; it's not a Toyota TRD competitor, and it will seriously disappoint and possibly endanger you if you venture out to Moab thinking you'll conquer it all. Nope. That being said, this is more than okay for a rough dirt road. Accept the premise and there's little to be disappointed about—and actually, a lot to like from a daily-driving standpoint.

Power comes from Nissan's tried and true 3.5-liter V6 that produces a decent 284 horsepower and 259 pound-feet of torque, while a continuously variable automatic transmission (CVT) sends the power either the front or all four wheels. Depending on terrain conditions, drivers can choose between two-wheel drive, all-wheel drive, and lastly "4WD Lock." Pick up those jaws—there are no locking differentials in the Pathfinder. It just means the all-wheel-drive is permanently engaged rather than when the system detects wheel-slip in the rear. Lastly, a 6,000-pound towing capacity makes it possible to tow the average camper, boat, or more legit off-road toys.

Driving the Pathfinder on rural highways is a lot more enjoyable than its boxy body (or even its own specs) may lead you to believe. Power delivery is robust and acceleration doesn't feel artificial or rubbery, even with the CVT. There's even a halfway-decent sound coming out of the tailpipes when you really step on it.

Despite a unibody construction, the Pathfinder rolls solid down the road and feels a bit more like a rugged mid-size truck than a hip SUV. Its tires and four-wheel independent suspension have a lot to do with that, something I discovered during the miles and miles of dirt roads I drove in Montana—which for the record—outnumber the paved roads the state has to offer several times over.

Unlike most family haulers nowadays, the Pathfinder is neither faux-sporty nor a cheap "entry-level-luxury" signpost. It doesn't rock low-profile tires and oversized wheels. It doesn't have open-pore wood accents or fancy puddle lights. No, it knows what it is: a hefty, utilitarian vehicle designed to haul the family, 10 cups, and a ton of gear, with enough all-terrain ability to scramble around a beach, a national park, or a ski resort while on holiday.

Speaking of families on holiday, the second-row seats can move fore and aft to provide more legroom to third-row occupants, while getting in and out of the back is made easy by a single lever that tilts and slides the second row. Parents with little ones will also be pleased to know that this mechanism also works even with a baby seat strapped in. If you have fur babies instead, do know that I borrowed a fake, decoration-only Labrador Retriever found in my cabin to see how the rear bench would hold up to an 80-pound fake dog. Needless to say, he was a really good boy and the seat passed the test with flying colors—just like the Nissan Rogue Dogue 2.

Taking the Rock Creek Edition to a Rocky Creek

Fun fact: the Pathfinder is now 30 years old. The seven-seater was completely redesigned six years ago for the 2013 model year and given a slight refresh in 2017. Likewise, much of Montana remains largely unchanged since Lewis and Clark explored it more than 200 years ago.

In the outskirts of Missoula, the terrain and weather conditions can change drastically in minutes. One moment I was having to reach for my sunglasses and lower the sun visor, and the next I was making sure all-wheel drive was engaged as snow flew through the air. Most of the day was spent traversing unpaved roads, with the majority of them caked in serious mud and patches of snow. Regardless of what rural Montana (which is basically all of Montana) threw at me, the Pathfinder felt at ease, responsive, and sure-footed. I can also confirm the heater/AC vent located by the driver's feet works as promised, and that Nissan's zero-gravity seats (also found in the Titan pickup truck) are very comfortable.

Spring in Montana also means lots of animals—of all shapes and sizes—roaming around and looking for food. Curious deer roaming near the edges of the road had me slamming on the brakes more than once, and spotting bald eagles (and their nests) made me throw the Pathfinder in reverse to get a better look at the majestic symbols of America a handful of times. A good test of the rearview and 360-degree cameras, too. One early morning, right as the sun began to grace the snow-capped trees, I heard a loud, spine-chilling huff as I prepared to take a few interior shots of the Pathfinder's cabin. A hungry brown bear, fresh out of hibernation, was just feet away in some nearby trees. I hustled inside like any sane person—though on second thought, the Pathfinder would've probably provided decent protection.

After a couple of days traversing some of the very same trails inked in the history books and snapping photos of the same animals the Blackfoot, Chippewa, Sioux, and a dozen other Native American tribes revered for centuries, I had learned to truly appreciate and enjoy the Pathfinder. Not only did it feel like it was the right vehicle for that setting, but it felt like the 2019 Nissan Pathfinder Rock Creek Edition was a breath of fresh air to an otherwise overlooked SUV.

No, the exterior doesn't have the LEDs and swanky curves seen on most rides nowadays, the infotainment graphics look dated, and just forget about Apple CarPlay or Android Auto. It's not the latest, nor is it the greatest. But the Pathfinder has something a lot of other modern crossovers and SUVs can't even dream of: A sense of purpose. A personality. If you're looking for a solid SUV that simply wants to get the job done, this is about as good as it's going to get without breaking the bank.