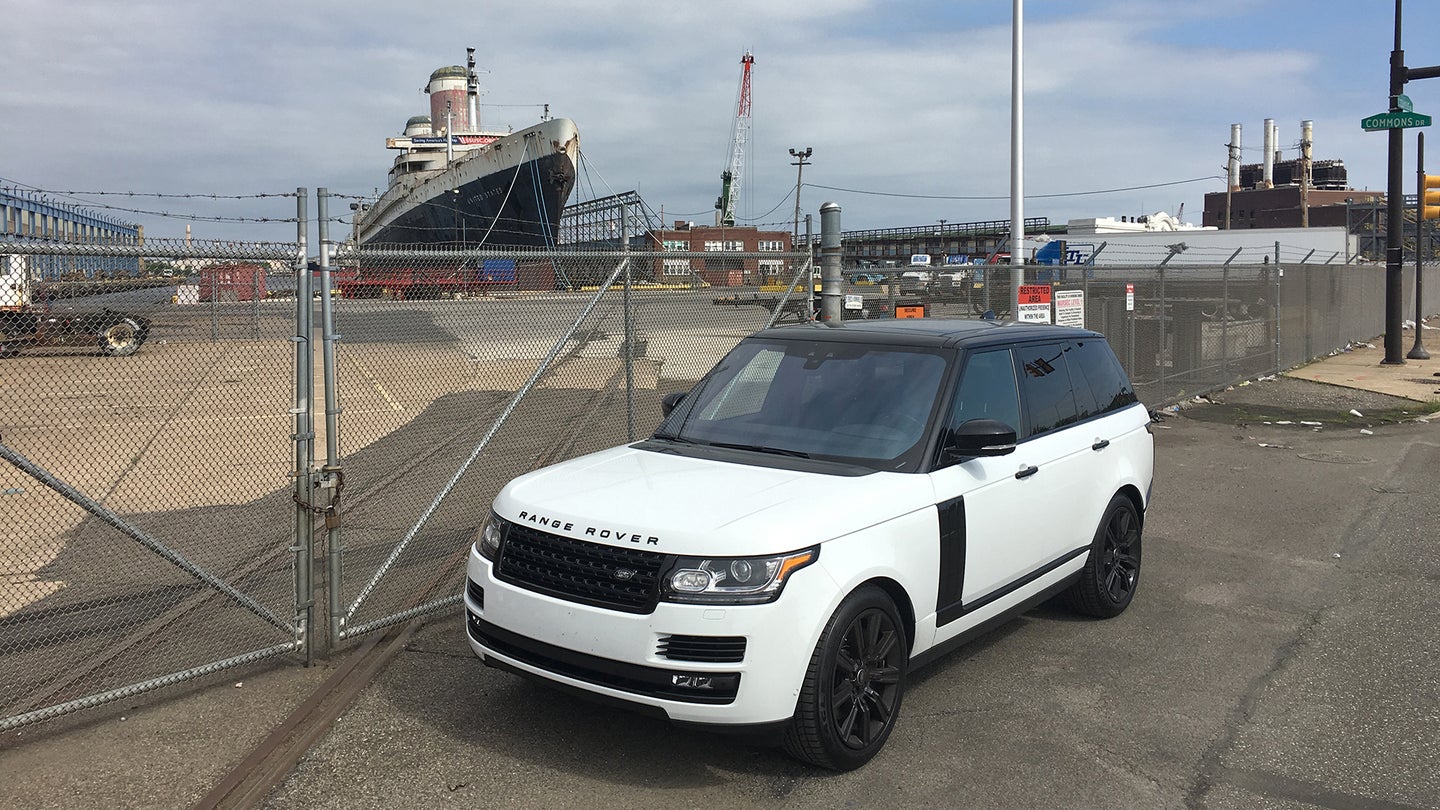 Welcome to Critic's Notebook, a quick and off-the-cuff car review consisting of impressions, jottings, and marginalia regarding whatever The Drive writers happen to be driving. Today's edition: the 2017 Land Rover Range Rover HSE.

WHO IS IT FOR?

WHERE DID WE TEST IT?

From New York City to Washington D.C. and back again, with a stop in Philadelphia to see the SS United States on the return trip. (More on that in a bit.)

THE FIRST THING YOU NOTICE IS:

The Range Rover remains one of the best-looking sport-utes on sale, period. The boxy appearance of older versions has been upgraded to a sleeker-yet-still-square-jawed look that projects confidence rather than screaming cockiness.

THING THEY DON’T WANT YOU TO NOTICE, BUT YOU DO ANYWAY:

The side strakes behind the front wheel wells are entirely nonfunctional.

CAR IS GOOD AT:

CAR IS BAD AT:

Like a drink for Kate Upton if she broke up with that pitcher. There are plenty of good cars on sale today in this great land, but few of them can match the depth of capabilities of the Range Rover. The HSE trim may lack some of the features of models higher up the hierarchy—the 510-to-550-horsepower supercharged V8, the semi-aniline leather, the 825-watt Meridian stereo, for example—only a sybarite on the level of Hedonismbot would consider it lacking. Once upon a time, the HSE was the top trim in the Range Rover lineup; if this were still as fancy as Land Rover's fanciest model got, I wouldn't complain.

It helps that many of the features that come standard on higher-level versions are available on the options list. The Vision Assist Package, which lumps together always-handy adaptive headlamps, the much-appreciate surround-view parking cameras, and the Terrain Response 2 and All Terrain Progress Control systems for true off-road mastery—is a steal at $2,500, and the 360º Parking Aid's combination of sonar and a graphic depiction of the car as it parks would be worth three times the $275 Land Rover charges. Avoid unnecessary big-ticket options like the 21-inch wheels, and you can spec out the perfect Range for less than $100,000.

But even without those features, there's still the all-around goodness of the Range Rover itself to fall back upon, and that's more than enough reason to buy one. It rides smoothly and comfortably, handling potholes and rough roads with the aplomb you'd expect of something capable of clawing over almost any surface on God's green Earth, but it's still nimble and playful on dry roads. It's roomy enough to carry five people with ease. It's quick enough to dart through traffic

On my way back from D.C., I drove the Range Rover through Philly to try and line up a photo of it with the SS United States—the derelict ocean liner that lies moored there until someone can find a better home for it.

The United States and the latest Range Rover, odd as it may seem, have a lot in common. Both are made in large part from aluminum, in order to save weight without sacrificing strength. Both can draw connections to the military; Land Rovers have served with the British armed forces, as well as other armies around the globe, for decades; the United States was designed to be pressed into service as a troop transport in the event that World War III broke out (and didn’t wind up being over in half an hour). Both are faster than you'd expect; the United States holds the Blue Riband, the speed record for fastest ocean-going passenger vessel to cross the Atlantic, while the Range Rover can blast from 0 to 60 miles per hour in seven seconds or less. (Exact figures are hard to come by for the HSE; the Land Rover website only lists a 7.1 second run for the lesser, 340-hp version.)

And just to cap it off, my test car happened to share the United States’s black-and-white livery. How 'bout dem apples, as they say.