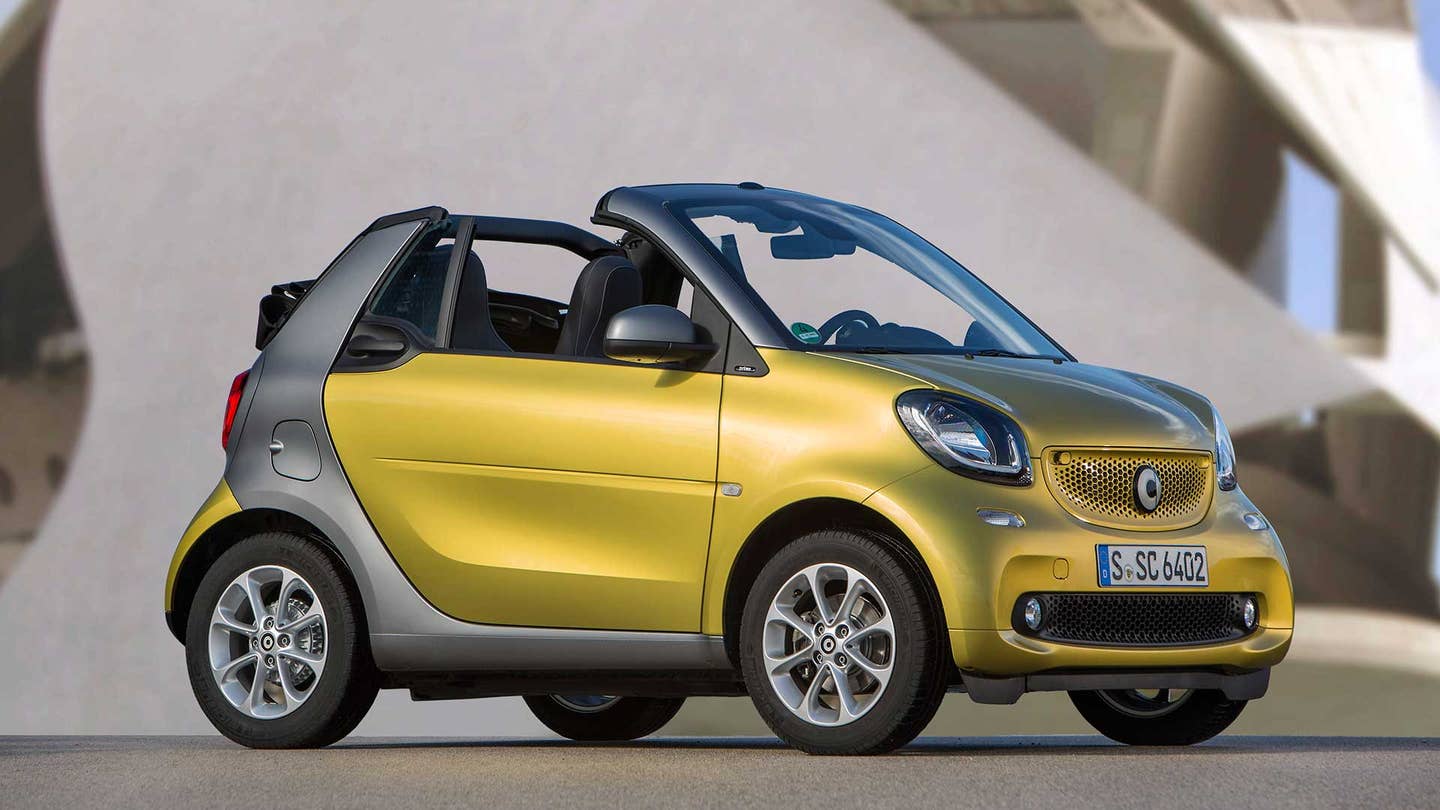 Americans are precious about where they will accept the prefix “micro.” Pairing it with “dermabrasion,” “wave,” and “aggressions” is no problem. However, when you fix it up with the word “car,” people get cagey. Our land today is more expansive than the one Whitman put to pen in Leaves of Grass, part of the reason Smart hasn’t found Stateside success with its micro offerings. But the carmaker is just as obstinate about cracking the U.S. code as Americans are about neglecting the Smart ForTwo, which is how I ended up in Spain driving the new Cabrio.

The two-seater droptop lives up to its brand name in cities like Valencia, where alley streets are so narrow and haphazard you feel like a mouse scurrying about, hoping to find a large chunk of cheese. In this deranged urbanity, the Smart’s only real weakness as a car is in transition. The start/stop system doesn’t stop, it peters out. Tap the throttle, the three-cylinder motor jolts into service like you woke it, sweating, from a nightmare. The six-speed dual-clutch transmission beats the previous automated manual, but if you ease off the gas for a spell, like when coasting to a stop, the gearbox needs a minute to remember where it was if you get on the gas again before stopping. The first few degrees of throttle travel are excitable, like the engine is unloading all 89 horsepower at once. It calms down after that, though, because there’s only 89 horsepower.

Once on the go the little guy is a treat. That fabric roof leaves interior noise a touch rowdy on the highway, but the hatchback is stable and no laggard in the fast lane. I have no idea why it has a tachometer or a Sport button–the last time I heard of someone speed-shifting a ForTwo was never. I don’t remember ever looking at the speedometer, either. On any major road you’re going with the flow of traffic; out among the vineyards and the goats you’ll face no temptation to test any limits.

I like the Smart–it’s got tons of character and the foibles don’t stop it from being a fun city car that’s game for the metropolitan grind if you can travel light. The recent redesign added muscle to its charm. It’s comfy all day long. The cabin is a colorful adult playroom with even more room; this generation got 2.5 inches wider. Throw the canvas roof all the way back and you have absolute horizontal and vertical access to the city, the sky and the reaches of the Ayuntamiento at your fingertips. You can park damn near anywhere, and if you find yourself down a dead-end alley with no cheese to show for it, the turning circle has been shrunk to 22.8 feet. If that gets any smaller, U.S. Figure Skating will certify the ForTwo as eligible to do scratch spins.

The upgrades helped Smart escape its global sales torpor in 2015. U.S. sales declined by 28 percent, but Smart USA spent the year without a Cabrio to sell. Elsewhere, increases such as a 72.5-percent uptick in Europe fattened the global tally by 33 percent. With this headless beast now ready for our market, U.S. sales should find their way again.

The company has done itself a favor by honing in on what it calls Smart Cities, where stat lines like urban density lend themselves to the ForTwo. There are 21 Smart Cities in the world and more added every year, four of them in the U.S.: Portland, San Francisco, San Jose, and San Diego. Owners there get perks like the Smart Spots app that identifies parking spaces just big enough for a ForTwo, free access to Car2Go car sharing throughout the U.S., and free rental of a Mercedes C-Class for a set number of days.

But can Smart ever really make sense here outside of Car2Go? In eight years, the ForTwo has broken 10,000 annual sales twice, in 2012 and 2014, and it’s hard to see how the ForTwo’s USP overcomes three of America’s USPs: lots of space, lots of choice, bargain prices.

It’s not fair to compare the ForTwo to cars like the Honda Fit and Toyota Yaris because the Smart is a lifestyle choice–if you want it, you don’t want anything else, and price-to-function ratios break down. But even among more expensive lifestyle options the Smart lags; the Fiat 500 takes four months to sell 10,000 units, the Mini Cooper (counting all variants) takes three. The much more expensive electric-only Nissan Leaf outsells the Smart, so too the even more expensive BMW i3. When you’re not getting out of a Smart dealership for less than $16,890 before a single option (only the abject would settle for the entry-level $15,400 Pure Coupe), even lifestyle justifications run out of steam or demand a back seat.

I’d like to believe the new ForFour is the one to bring over, a handsome dasher that makes a better superficial case for the U.S. Yet by adding a back seat–while keeping the 89-hp engine and premium price–you lose the ForTwo’s unique alchemy and likely end up exchanging one set of ugly challenges for another.

That alchemy is what sells the ForTwo in the first place, while at the same time imposing bizarre positioning here. That’s a shame. I like a world with Smart in it, a fun little car that just wants to enjoy the U.S. amusement park. I just don’t see how it will ever be tall enough to ride our rides.