Is the all-new Ram a pickup truck or a 2.5-ton limousine? Well, can't it be both? 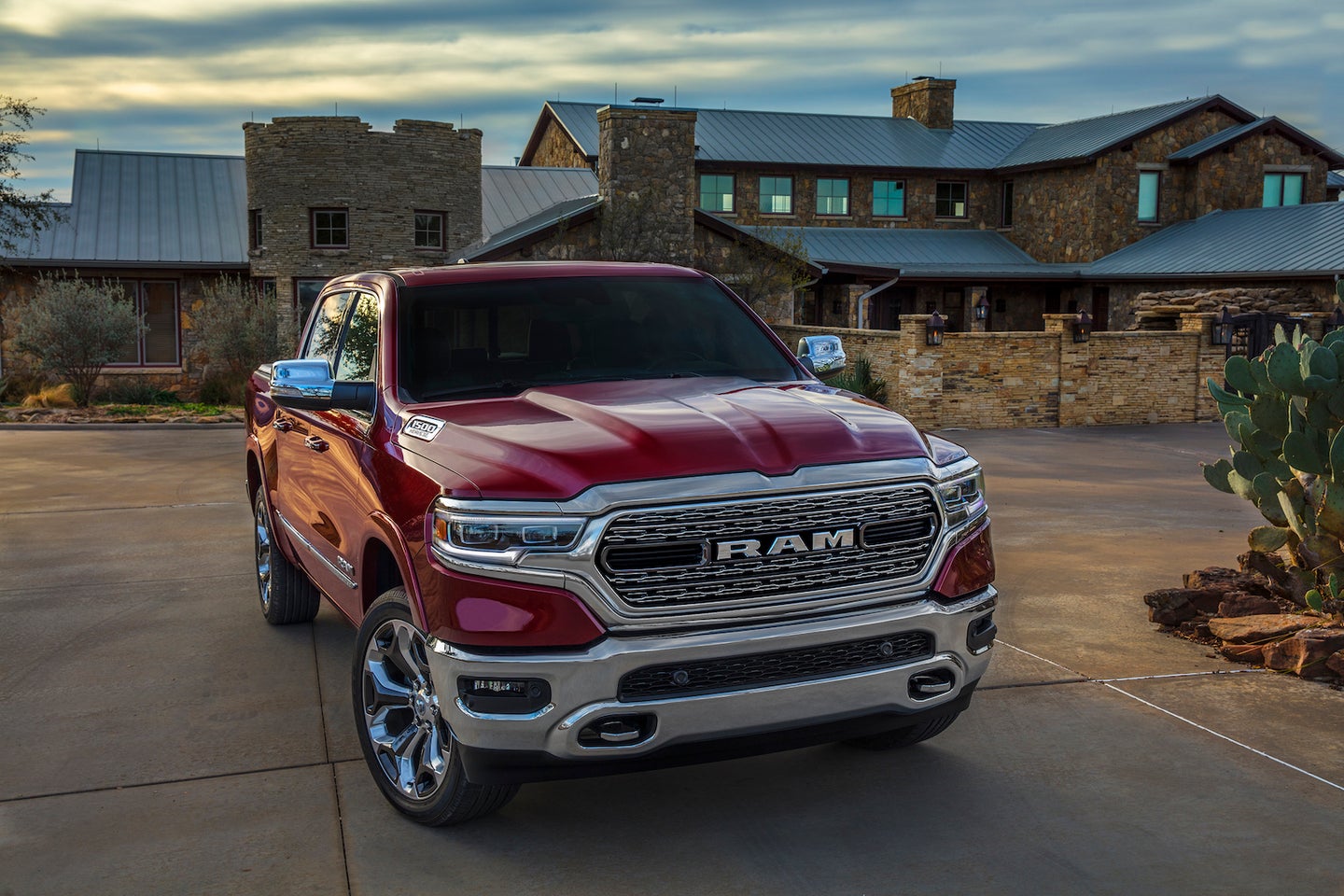 Remember when pickup trucks were all about stamped-steel wrappers, beat-up beds, and interiors bare as an empty can of Coors? The all-new 2019 Ram 1500 is not one of those pickups. But it is the best truck in the full-size segment today—and the competition's not really all that close.

Many truck reviewers are afraid—and I mean pants-wetting afraid—to just come out and say that. I suspect it’s because they’re loath to hurt anyone’s feelings. Not just Ford, GM, and their massive NFL-Sunday-truck-marketing machines, but Ford, Chevy, and GMC owners who howl like mad if anyone suggests their truck isn’t the best. Most of these notoriously loyal owners, of course, have never sat in the latest pickup competitors, let alone driven them. Yet they’ll happily spread vicious rumors and unsupported nonsense about them. And reviewers, crazily, seem to take their word for it: Hey, every Ford owner I talk to tells me there’s nothing like a Ford pickup. Oh, and they told me the Ram ain’t worth shit. What a surprise.

I hate to break it to you, Denis Leary, but this new 2019 Ram 1500 is just plain better than your Ford—or Chevy, Titan, or Tundra. It looks better. It’s every bit as strong and capable. It’s got the most (and coolest) features. And both the interior and the ride-and-handling balance—two critical components of the modern, demi-luxury truck—are marvels that put this Ram over the top. I know I’m falling for a test car when I don’t want to give it back, and that was definitely the case with the Ram Limited Crew Cab 4x4 I drove —a swanky range-topper that reached nearly $65,000 with options.

Yes, the old Ram’s truck-stoppin’, big-rig grille was its design signature. But it was time for a change, and the new Ram looks great: modern, still plenty manly, but less over-the-top macho. It’s stronger, lighter, and more aerodynamic, too. The truck sheds about 225 pounds, though it’s still a heavyweight at up to 5,200 pounds in V8 Crew Cab guise. The Ram’s steel ladder frame actually gets sturdier and thicker where required, despite the frame’s 100-pound weight reduction, with 98-percent high-strength steel construction and class-unique “splayed” front rails that better protect passengers in front-end collisions.

Max payload capacity rises to 2,300 pounds, with max towing of 12,750 pounds. Front and rear axles get six-lug connectors, up from five, and the rear differential is bathed in engine coolant for a fast rise to operating temperature and to cool the diff under heavy loads. Reworked active grille shutters reduce drag for better fuel economy, and coil-spring models—versus those with the optional four-corner air suspension—get a deployable front air dam to do the same. Opt for that plush air ride setup—which no other half-ton truck offers—and the Ram hunkers down automatically to slice through the wind at speed. Fuel economy rises to an official 15/21 mpg in city and highway for the 4x4, 5.7-liter Hemi-powered V8 truck.

That Hemi soldiers on with an unchanged 395 horsepower and 410 pound-feet of torque. But mated to a finely-tuned eight-speed ZF automatic transmission and a lightened truck, the V8 hustled my Ram past New York’s fearful Uber armies and other assorted ditherers like they were standing still. The Hemi sounds great as it barks through its dual exhausts, and the engine’s switch to fuel-saving four-cylinder operation is virtually undetectable, with electronic mass dampers on the frame to soothe vibrations and active noise cancellation in the cabin.

Up front, the Ram’s retuned suspension includes a composite upper control arm. The previous Ram’s class-unique, coil-spring rear suspension—which already made it the smoothest-riding half-ton truck—gets even smoother, with new shock absorbers whose bypass valves adjust for impact speeds. I nearly had to giggle over how creamily, and quietly, the Ram rode in every situation—including over the nasty cobblestones on my Brooklyn street, which the Ram dissolved better than some luxury sedans I’ve driven. And the Ram Crew Cab’s four-inch stretch also carves out the roomiest cab in the pickup game, including a ridiculous 45.1 inches of rear legroom that tops every full-size luxury sedan, including the BMW 7 Series and its 44.4 inches. When I picked the Ram up from Newark airport, I plunked a huge roller bag on the rear-seat floor—not flipped on its side, but dead flat. Incredible.

Coincidentally, following a week-long test, I hopped literally straight from the Ram’s cab into a 2019 Chevy Silverado. And it took about 300 yards to reach a verdict: The “all-new” Chevy, with its primitive, leaf-spring rear, drove like an old horse carriage—or just an old pickup— compared with the Ram. The Chevy clomped over bumps, produced annoying head-toss over wavy surfaces, and boomed and jiggled over surprisingly modest pavement imperfections. Throwing a few hundred pounds in the Chevy’s bed improved things, but that’s the point: The Ram rides beautifully whether laden or unladen, and the latter circumstance—whether hardcore truck guys like it or not —is how most owners and families are using (or not using) their trucks. Mark my words: Over the next 10 years, other half-ton truck makers will dump their leaf springs for coils, dampers, and a multi-link design, because the Ram’s competitive advantage (or their own customer complaints) will force their hand.

The Ram’s optional air suspension is hardly a must, but it brings other advantages. It can adjust ride height to level a load or trailer—another boost to steering, handling and safety— and allow easier cargo loading and passenger entry/exit. And, as mentioned above, it can also reduce aerodynamic drag for improved fuel economy.

With my air-suspended Ram squatted down for that easier climb, I entered a luxurious cabin that pickup mavens of 20 years ago would scarcely recognize—or, in the case of this Ram’s dramatic, 12.0-inch UConnect infotainment screen, wouldn't recognize at all. (Even basic Rams get an 8.4-inch UConnect infotainment screen.) My truck included tooled, full-grain leather that recalled fancy cowboy boots; pinstriped “tuxedo” wood (there's quarter-sawn oak “barn wood” for the Laramie Longhorn); dual gloveboxes, and a 19-speaker, 900-watt Harman Kardon audio system with gleaming stainless-steel enclosures. Analog driver’s gauges are handsome and easy-to-read; their chronograph-style look didn’t reach the Patek Philippe heights of older Aston Martins, but it’s still a winning presentation. A knurled-metal rotary transmission dial is flanked by four-wheel-drive controls, including an electronic low-range setting, along with hill-descent and axle-lock switches. I also appreciated the Ram’s extra-large side-view mirrors with an integrated magnification zone—one of about 50 ways the Ram kicked the Chevy’s ass, even with the $56,000 Chevy Silverado I drove, whose crap-plastic interior wouldn’t pass muster in a $20,000 Hyundai.

Oh, and don’t forget the Ram’s crazy-large configurable center console, which swallowed my MacBook with enough room left over for a change of clothes. Five USB ports are strewn about, including four that add the new, ultra-fast USB-C connection. On one Indian summer day, the Ram became such a comfy work area that I didn’t want to leave. I sat in The Drive’s Brooklyn parking lot along New York Harbor—waiting, coincidentally, for that rival Chevy Silverado to show up—connected to the onboard wi-fi network, and plugged my computer into the 115-volt, 400-amp outlet. Text message announcements arrived on the Tesla-like, vertically-oriented screen, and the Ram displayed and/or voiced them out loud. The only hiccup was an icon that suggested you could either “send a new text message with voice recognition” or a predefined message—things like “stuck in traffic.” But when I hit the “send a new message” icon, the Siri-like female voice refused to let me do it, offering up only the preset options.

If the V8 Ram does have a weak spot, it’s the thirst for unleaded, despite the cylinder deactivation tech. (Hello, Hemi.) When I coasted every chance I get and kept speeds around 60 miles per hour, I indeed managed to eke out 21 highway mpg, as per the EPA. But when I drove the Ram with any gusto whatsoever, fuel economy plummeted to as little as 12 mpg overall. I’m looking forward to driving the Ram’s new eTorque powerplants, which integrate a 48-volt electrical system and powerful, belt-driven starter/alternator to deliver a mild-hybrid jolt, along with regenerative braking and storage, using a small lithium-ion battery. That jolt equates to a 90-pound-foot torque boost on Pentastar V6 Rams, and 130 pound-feet for V8 models. That eTorque unit is a standard calling card for those V6-equipped Rams and a $1,450 option for Hemi V8 models; it's also available on the new Jeep Wrangler. With eTorque's help, mileage for the V6 Ram jumps to a thrifty 20/25 mpg in two-wheel-drive trim, and 19/24 mpg with 4WD. The Hemi V8 eTorque model returns 17/23 mpg with 2WD (a 2-mpg improvement in city and highway versus a standard V8) or 17/22 with 4WD. I’m curious to see if one or both models can deliver more-meaningful gains in real-world operation.

And if the Ram is the leading avatar for an age of increasingly deluxe, everyday trucks—the pickup as modern-day family car—it also underlines that those families had better enjoy generous household incomes. Fiat Chrysler Automobiles isn't even bothering with a regular cab model—those traditional worker-bee specials with no back seat but available extra-long beds for hoisting and hauling real cargo. For them, FCA will continue to sell the previous-gen Ram with a regular cab. A rear-drive Tradesman V6 quad cab of the 2019 model starts at a reasonable $33,390, but securing a Ram V8 means spending at least $43,000. For my 1500 Limited 4x4, options from an off-road package to a bed tonneau cover kicked the cost to a heady $64,640, from a base of nearly $58,000. I've never driven a pickup that drives and acts more like a luxury car than this redesigned Ram. But the Ram also shows the price of car-like luxury when it's jacked up to literal pickup heights.

One Fancy, Capable Beast of a Pickup Truck
The Drive