GMC's small, fancy pickup truck has much of what's needed for paternal duty—but the compact size is both blessing and curse. 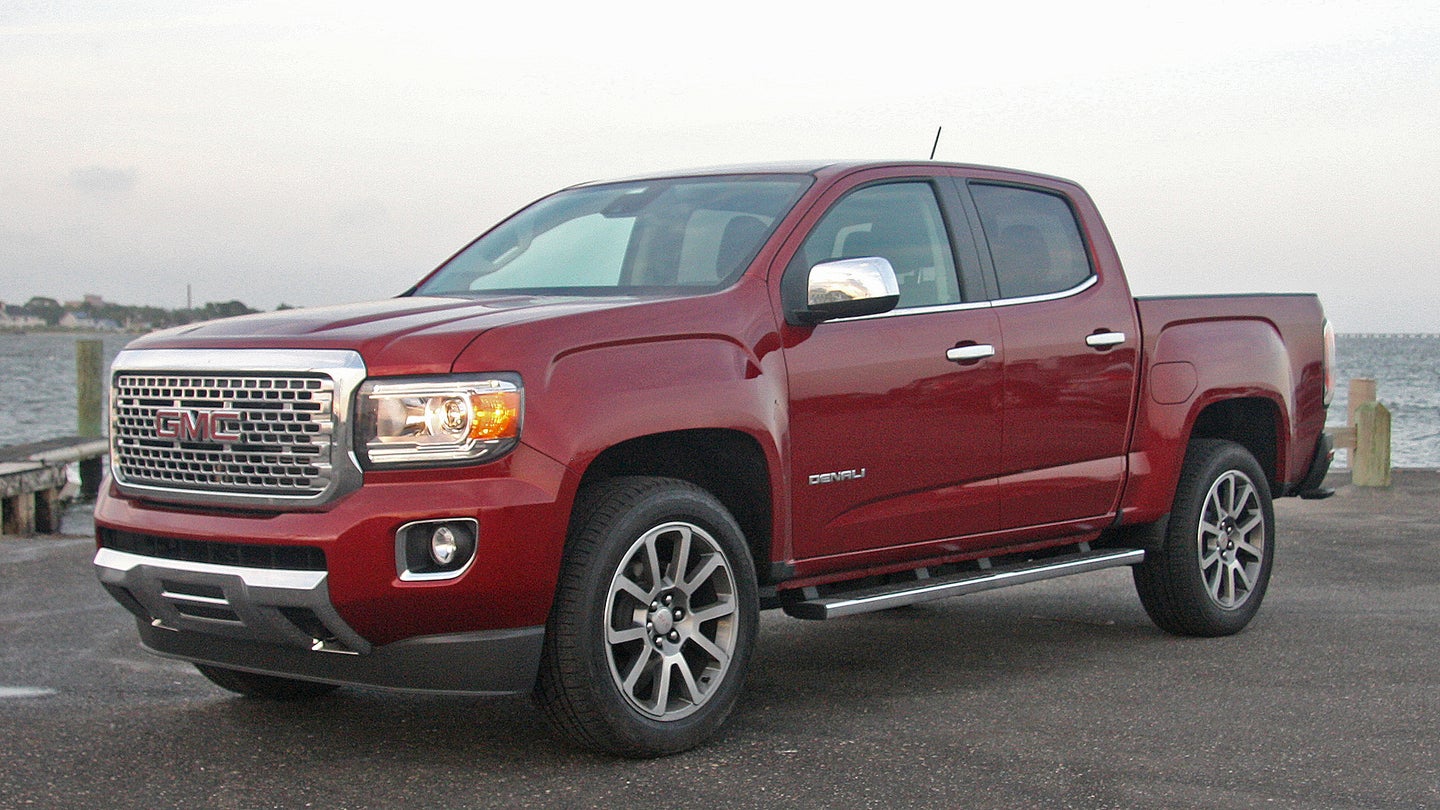 I finally did it: I'm a dad. The funny thing is, I've always owned dad cars, even before I needed to. Owning anything with less than four doors never made much sense, which is how I ended up with a stable of souped-up grandpa cars from the Sixties and Seventies. Now that I'm a father, the '74 Oldsmobile sedan I brought my wife and son home from the hospital in seems a bit dated. And that, my friends, is how I found myself on this quest to find the perfect new dad car. The most recent contestant: The 2018 GMC Canyon Denali.

The 2018 GMC Canyon Denali, By the Numbers

It wasn't long after my son was born that I learned what a dad really is: a glorified Sherpa. As the family's schlepper-in-chief, I'm responsible for lugging all manner of things to and fro as my wife tends to the more pressing tasks related to keeping our child alive. This is how I've come to realize that every dad needs a pickup truck.

Granted, many of my logistical nightmares are self-imposed, based upon both my obligations and hobbies alike.  But when my worlds (baby stuff, family stuff, me stuff) collide, only a pickup truck will do. Like that time I had to pick up my son from daycare, strap him into the back seat, sit in traffic for hours to sell some random Craigslist user an old Subaru engine that had been sitting in my garage for half a decade, then pick up my wife and drive to Virginia to pick up a U-Haul trailer full of furniture. Yet not only did the GMC Canyon Denali handle all that pack mule drudgery as well as any full-sized pickup, but when I returned home to my Model T-width driveway, I was able to pull in without knocking out a fence post. The relatively small size of the Canyon—and that of its Chevrolet sibling, the Colorado—is one of its best features. At a time when pickup trucks keep getting more gargantuan with each passing year, it's nice to drive something that doesn't feel like a limestone quarry dump truck. And despite my concern that the Canyon's short box would be too small for most jobs, the bed was able to handle couches and mattresses with ease. In two or three trips, I got all the big furniture my brother couldn't fit into his small car to the house he was moving into a few blocks away, eliminating the need for a moving truck. Thanks, little pickup.

Equipped with the 308-horsepower 3.6-liter V6, the GMC Canyon can tow 7,000 pounds. That was more than adequate to handle that 12-foot-long U-Haul trailer loaded up with my grandparents' old furniture, which included some rather dense crates of my grandfather's tools. I'm not sure how much it actually weighed, but the truck's highway performance under all that load was fine. A torquey 2.8-liter four-cylinder turbodiesel that churns out 369 pound-feet at only 2,000 rpm is available, and can tow 550 pounds more (in 4WD trim) while delivering markedly better fuel economy. The V6 isn't terrible, though, and I saw close to 20 mpg on the highway even while towing. I got an average of 24 mpg in the diesel version of this truck, and considering the fact that the gas and diesel options aren't that far apart in price when you opt for the Denali trim, the diesel is a good option. Less money spent on fuel means more lettuce for junior's college education, right?

On the baby end of things, however the Canyon is a mixed bag. The child safety seat anchors are easy enough to use, and because the truck has some height to it, you don't have to stoop down to fasten them. Obviously, the stroller, Pack 'n Play, and 15 boxes of extra diapers will all fit into the truck's bed with room to spare. The challenge comes when the weather turns foul: As with any pickup, if you don't have a tonneau cover or cap on the bed, that stuff is going to get wet. I put a tarp over my son's stroller when it rained, but that only worked when the truck was moving. If you're sitting still during a downpour, everything will get soaked.

And bringing gear into the cabin presents its own issues. It's comfortable enough for four adults, or three adults and a safety-seated child, in the Canyon. But when weather compels you to batten down the hatches and pull everything that isn't waterproof inside, you run out of space quickly. In terms of cubic footage, you're sitting in a compact car that rides on a truck frame. That $45,000 price tag is for towing and utility capabilities, not for interior largesse. Unless you're very selective about what you carry around (and let's face it, most of us aren't), if you've got more than one child, you should be looking elsewhere for a family truckster. Even one kid was a bit of a stretch when we were all stuck inside the cab, in the rain, with a pile of the baby's oddly-shaped paraphernalia.

If I have one beef with the aesthetics of the Canyon and its Chevrolet brethren, it's that General Motors appears to have a big box of late-Nineties-era instrument panel parts it's trying to get rid of. We've been looking at those same gauges for years now. And what's with the physical key I have to insert and turn? Aren't we supposed to be able to start all new vehicles with the push of a button? [We think he's kidding with the grumpiness. —Ed.] GM also still uses those little, ungraspable rounded-off door lock buttons that seem like a poor way to unlock a door, although I've found a new use for them. They pop down automatically when the truck begins to move forward, and when I had my arm draped over the window ledge as any self-respecting truck driver would, it would pinch the soft skin inside my upper arm—giving my son his first lessons in the use of profanity.