The Chevrolet Colorado ZR2 in Vermont: A Tonka Truck for Big Kids Gets the Green Mountain Test

Chevy's off-road special isn't over-the-top powerful like the Ford F-150 Raptor, but this pickup will still top virtually any obstacle. 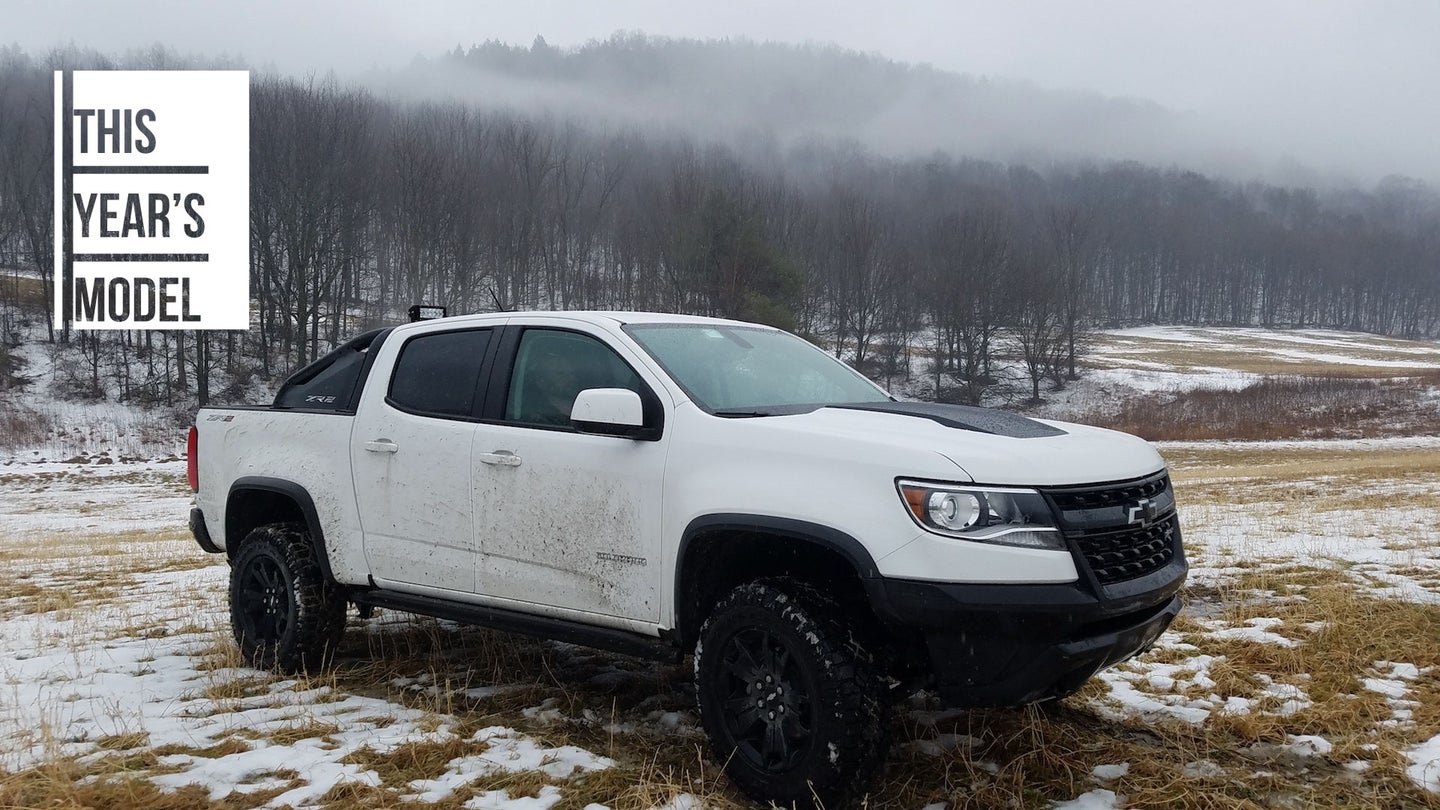 With pickup trucks flying off the shelves like Tonka toys for overgrown kids, it was only a matter of time before the toy aisle expanded. The Chevrolet Colorado ZR2 is expressly designed for playtime in the sandbox, though it’s civilized enough to get you to work and back. It’s a rock-crawling, desert-running offshoot of the midsize Colorado‚ and a smaller, saner, more-affordable alternative to the Ford F-150 Raptor.

The Chevy won’t pummel a trail as quickly as the Ford, with its 308-horsepower 3.6-liter V6 falling far behind the Raptor’s 450-horsepower twin-turbo EcoBoost six. To the disappointment of speed freaks, the ZR2's output is unchanged from the Colorado’s regular V6 application, though it escorts the ZR2 from 0 to 60 mph in a peppy 6.1 seconds. Yet Chevy says the ZR2 is more than powerful and capable enough to conquer the Rubicon Trail, the slow-motion torture track in California where Jeep puts its hardiest vehicles to the test.

That made a winter weekend in Vermont a piece of cake for the Colorado, even if General Motors's planned day of guided off-roading wound up canceled due to freezing rain and ice that left trails too treacherous to manage—iced-over slopes being one thing that can foil even a hardcore four-by-four, despite the Chevy’s fairly aggressive, 31-inch Goodyear Wrangler Duratrac tires on 18-x-7-inch black aluminum wheels. Instead, my friend Eric and I loaded up the ZR2, climbed aboard and headed to Stratton Mountain for skiing.

The “climbing aboard” part revealed the Chevy’s recalibrated mission, with a two-inch body lift that made for a muscle-straining climb into the cab. This was a Crew Cab model with four full-size doors, a spacious back seat, and a shorty bed—just 5.2-feet long—for buyers who place less priority on utility. Buyers can also opt for an extended-cab ZR2 with a long bed but tighter rear quarters, while diesel fans can choose a 2.8-liter inline-four with 181 horsepower and 369 pound-feet of torque. Even most recreational-minded owners will rightly skip our tester’s bed-mounted spare tire carrier (a dealer-installed option), whose convenient access comes at great expense to cargo space.

The ZR2 treatment makes the Colorado one great-looking truck, including The Drive's “Summit White” tester, whose imposing hood, tubular sport bar with off-road lights, and black body cladding drew approving glances from other truck owners. Versus a civilian-issue Colorado, the ZR2’s front and rear tracks are widened by 3.5 inches. A rotary dashboard knob controls locking differentials for those front and rear axles, including a full-time 4WD setting. There’s a low-speed transfer case, naturally, and a 3.42 rear-axle ratio in standard operation.

Naturally, the lifted bodywork makes room for more suspension travel, with revised mounting points and upsized springs, shocks, and cast-iron control arms. Rocker panels are girded with standard rock sliders to keep owners from wincing when they scrape over the rough stuff. A pair of skid plates guard the radiator and engine oil pan up front and the transfer case at the rear.

The tippy-toed stance—along with reshaped front and rear bumpers—deliver eye-opening approach, breakover, and departure angles that let the Chevy pretend it’s a Jeep Wrangler with a bed out back. Indeed, those generous body clearances, combined with the ZR2’s shorter wheelbase and skinnier footprint, actually give the Chevy one off-roading advantage versus its Motown rival: The Chevy can negotiate tighter, steeper trails that would stymie the full-size Ford.

But the Chevy’s piece de resistance—literally there to provide resistance—are its Multimatic dampers, their yellow cartridges easily spotted below the Colorado’s lifted skirts. (Being a gentleman, I did not take an upskirt photo of the ZR2). They’re a technological gift from the Canadian company that manufactures the Ford GT, sophisticated shocks found on such highfalutin' models as the Aston Martin One-77, Mercedes-AMG GT, Chevy Camaro ZL1 1LE, and the aforementioned Blue Oval supercar. Compared with conventional shock absorbers, Multimatic’s spool valve technology allows far more variability in compression and rebound rates along the range of the damper’s travel, as well as relative to impact speed and force. One payoff is excellent body control even as the Colorado is, say, racing down a washboard road, but without transmitting undue harshness into the cabin.

The V6 moves the Chevy briskly, though its cry turns a bit loud in its upper register. One sour note is the tuning of the eight-speed automatic transmission (the diesel gets a six-speed); the transmission likes to saunter into high gears in the interest of fuel economy, but gets caught out when you summon big power, with hesitant downshifts and the occasional obtrusive lurch.

The Chevy’s real coup is that it’s a hardcore trail truck, but not obnoxiously hard-edged or sloppy on the street. Where the Raptor feels like 2.5 tons of Jell-O on pavement, jittering and bounding about while twisting the steering wheel in the driver’s hands, the Colorado stays composed and on path. I could certainly tell it was a modified pickup, yet versus the Ford, the Chevy’s imposes less of a penalty in handling and ride quality. The Colorado’s steering helps a lot, with sturdy weighting and confident response that eased white knuckles on New York’s narrow, mountainous Taconic Parkway during our return trip in a steady rainstorm. What the Chevy can’t do, at least as readily as the Raptor, is to shake its tailfeather under great gobs of power, due to a modest 275 pound-feet of torque versus 510 for the madcap Ford.

Though our official off-road adventure had been nixed, we ventured onto snowbound two-tracks that the Chevy chugged through with reasonable aplomb, limited only by available tire grip. Then we got lucky, coming across a long stretch of tundra-like pasture that let the Colorado flaunt its pre-runner skills. At speeds where most trucks would be bouncing our skulls off the headliner, the Chevy blasted through hillocks and mucky wallows with blasé efficiency.

Chevy is making much of the ZR2’s affordability, starting at $42,795 for this Crew Cab model. My test truck listed for just under $47,000 with options. Yes, that’s about $9,000 less than a F-150 Raptor Super Crew—but this is a midsize Chevy with a standard-issue V6, not a full-size pickup with a barnstorming 450-hp EcoBoost that’s a kissing cousin of the Ford GT’s exotic powerplant. The $40,000-plus price also focuses attention on the Colorado’s largely-unchanged, somewhat utilitarian cabin, though standard niceties such as leather-wrapped seats and steering wheel, a Bose audio system, an 8.0-inch infotainment touchscreen, and 4G LTE WiFi help soften the blow.

That’s the thing about this ZR2: If you’re just rolling into campgrounds or kicking up gravel on backroads, a more-modest Colorado will suit you just fine—especially since the base pickup starts at barely $21,000, half the price of the ZR2. A nicely equipped, 4WD V6 Crew Cab can be had for around $32,500.

Chevy’s high plains drifter can make sense—particularly if you live west of the Mississippi, surrounded by big skies, wide-open spaces and a dearth of “No Trespassing” signs; or if you're a dedicated trail hopper anywhere in the U.S-of-A. That is to say, the ZR2 makes sense unless you’re buying one as much for its mountain-man looks and attitude as for genuine capability. But we all know that nobody buys a truck for such frivolous reasons, don’t we?

Editor's note: An earlier version of this story said the optional diesel engine was a V6. It is, in fact, a 2.8-liter inline-four.