As Jeep's Wrangler-based Gladiator looms on the horizon, Chevy doubles down on its own all-terrain pickup truck. 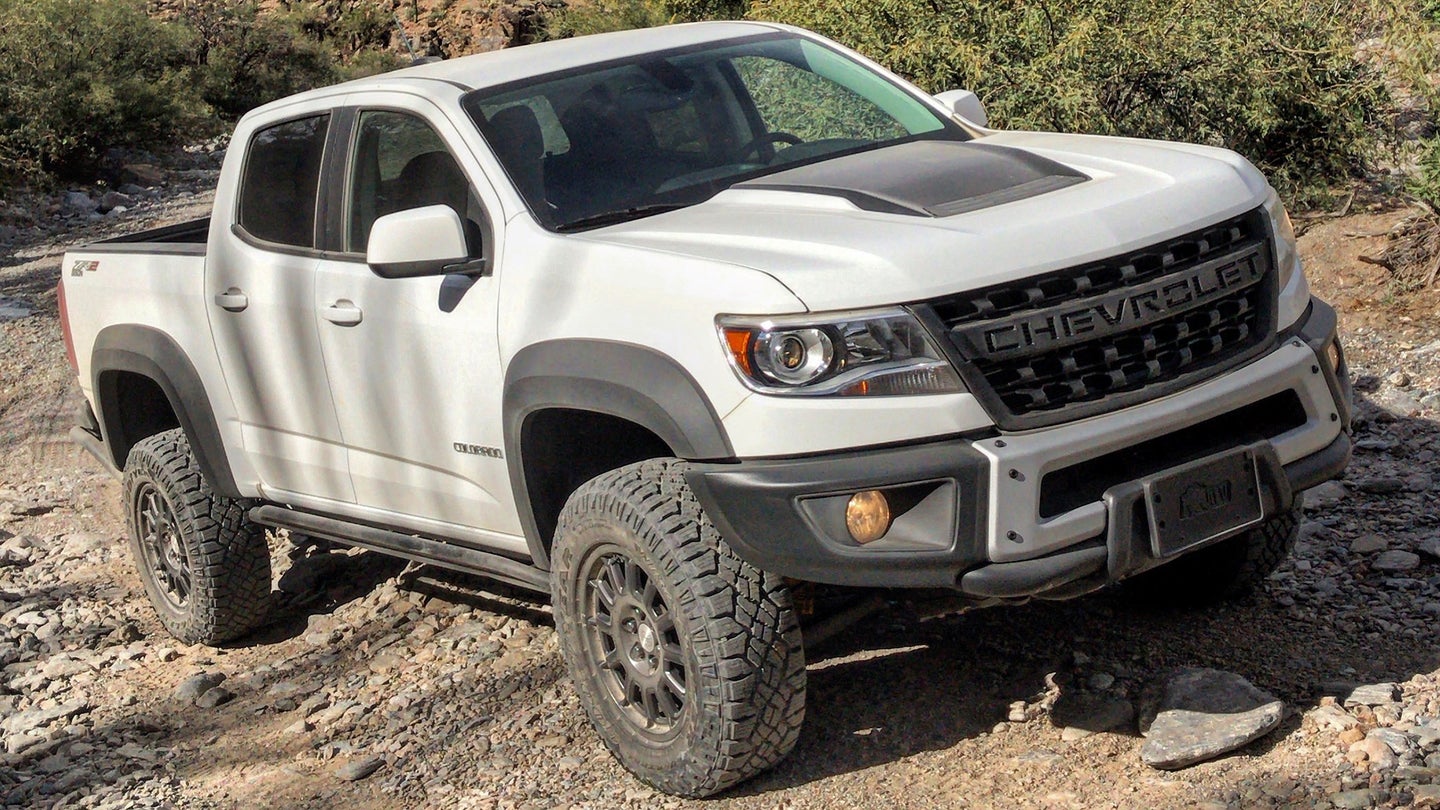 Jeep may have claimed victory over the Internet during this year's Los Angeles Auto Show with the long-awaited reveal of the Wrangler-based Gladiator pickup—but Chevy already has plans to steal the off-road truck's thunder before the new rig even lands in showrooms with the new Chevrolet Colorado ZR2 Bison, arriving in dealerships in January 2019. And in a betrayal sure to rank alongside Commodus suffocating his father*, General Motors tapped the help of one of Jeep's own aftermarket friends to do it: American Expedition Vehicles, better known by the acronym AEV.

While it's best known for kitting out Jeeps and Rams with hardened off-road accessories and transforming them into standalone nature-conquering vehicles (and quite successfully, too, as The Drive's own Kyle Cheromcha found out firsthand during a test of the Ram 1500-based AEV Recruit this past summer), AEV wound up tying the knot with General Motors for its first official-OEM-partnership vehicle. It's hard to imagine Jeep boss-turned-Fiat Chrysler CEO Mike Manley didn't feel a phantom blade slide past his vertebrae when that partnership was announced.

Compared with the sorts of changes AEV inflicts on Rams and Wranglers for its in-house conversions, the alterations to the Colorado ZR2 for Bison duty are fairly mild. Apart from a pair of standard fog lamps, a new grille, bigger fender flares, and unique 17.0-inch-by-8.0-inch aluminum wheels inside 31-inch Goodyear Wrangler Duratrac tires, the tweaks come in the form of steel armor: a quintet of hot-stamped Boron steel skid plates to guard the oil pan, front and rear locking differentials, fuel tank, and transfer case from attacks on the truck's soft underbelly, and stamped steel bumpers fore and aft to take the brunt of impact with any obstacles. Those bumpers also come prepped for a winch up front and with extra recovery points astern, which brings to mind images of GM engineers testing an Amtrak-like train of several ZR2s linked together winch-to-tail. (Or is that just me?)

The Bison bumpers and grille, at the very least, make the ZR2 look like the truck it always should have been; it's much less awkward and under-bitten than the regular ZR2's English Bulldog face. Otherwise, however, the visual differences between Bison and regular ZR2 are minimal; an attentive eye might pick out the AEV logos on the tailgate and headrests, but otherwise, it goes incognito amongst any Zed-Arr-Deuces owner-outfitted with American Expeditionary Vehicle accessories. (Fun fact: this ZR2 variant's name is an homage to AEV's logo, which depicts the American ungulate entertainingly known to zoologists as Bison bison bison.)

ZR2 Bison drives like any other version of Chevy's top off-road Colorado...

From behind the wheel, the changes don't translate to a very different experience from the regular ol' ZR2 that's been floating around Chevy showrooms since last year. On pavement, the truck still rides smoothly in spite of its toughened, giant tires, thanks to the Multimatic DSSV dampers that seem to have been tuned by graduates of the Hogwarts School of Engineering. Those knobby rubbers still send a decent amount of road noise into the cabin, however, and cause the truck to wander a bit at speed. The 3.6-liter naturally aspirated V6 doesn't have trouble holding the truck at speeds high enough to court excoriation from law enforcement—even with those tractive tires and drag-inducting height, 308 horsepower and 275 pound-feet of torque are still 308 horsepower and 275 pound-feet of torque—but accelerating further once rolling at highway velocity takes pretty much everything the engine has, even with the eight-speed automatic shuffling down as low as it can go. (I didn't have a chance to test out a Bison with the 2.8-liter turbodiesel inline-four.)

...at least, until the nasty rocks show up

Off-road, however, the AEV bits and pieces have a chance to shine. To demonstrate exactly how tough they are, Chevy sent journalists scrambling up and a rocky trail in the mountains near the Tonto National Forest east of Phoenix in a herd of Bisons, where the skid plates were put to good use shielding the tender mechanicals from the sharp rocks we clambered over on a technical section. The noises emanating from beneath the Bisons as they hopped and scrambled up the sharp-edged trail may have sounded like an off-tempo version of the Terminator theme, but the skid plates did their job; in spite of multiple attacks by toothy rocks, every ZR2 Bison repeatedly scaled the tricky trail with little trouble.

The only real issue to arise during off-roading stemmed from the throttle's responsiveness; it was way too difficult to moderate the gas pedal during rock crawling, at least on the V6 model. I’d lay it on as delicately as humanly possible to try and inch over some giant rocks, and the ZR2 Bison would give me no movement...no movement... then lurchforwardtoofast, forcing me to scramble to the brakes. Activating the truck's off-road mode smoothed it out some, but the throttle was still too agro for easy rock-crawling. (My co-driver resorted to left-foot braking to moderate his pace.) I'd be curious to see if the diesel's greater low-end torque made it easier to inch up and over the rocks at a snail's pace; if so, I'd say any serious rock-crawlers should go for the oil burner.

Away from the craggy areas tailor-made to test Boron steel skid plates, the Bison behaved like any other ZR2 would off-road, its 8.9 inches of ground clearance, flexible suspension, beefy tires, and low-range four-wheel-drive with lockable diffs allowing it to trek effortlessly up trails most trucks would fear to tread upon. Thanks to those aforementioned magic Multimatic shocks, bounding down a rough off-road trail at 30-plus miles per hour felt as comfortable as moseying down a country road; the ZR2 isn't quite equal to a Ford Raptor in high-speed ground-pounding progress, but it's certainly the closest anyone else has come. And as impressive as the saurian F-150 is in most situations, the Colorado's shorter and narrower proportions makes it a better fit for most off-roading.

Those Bison bits don't come cheap; the extended cab version starts at $48,045 and the crew cab at $49,645, including destination—$5,750 more than the respective regular ZR2s. That's a lot of money for a midsize pickup, even in this day and age when truck prices are climbing like a Silverado atop a SpaceX rocket. But to criticize the ZR2 Bison for being expensive misses the point. If you're just looking for an inexpensive way to go off-road in a truck, a stripper Colorado Z71 can be yours for a hair over $35K. The ZR2, for all its capabilities, is a toy, designed for those who want the best they can grab; to put it in SAT analogy terms, Colorado Z71 : Camaro SS :: Colorado ZR2 : Camaro ZL1. By that logic, consider the Colorado ZR2 Bison the off-road pickup truck version of the Camaro ZL1 1LE—an option package pushing an already-impressive vehicle just a bit further.