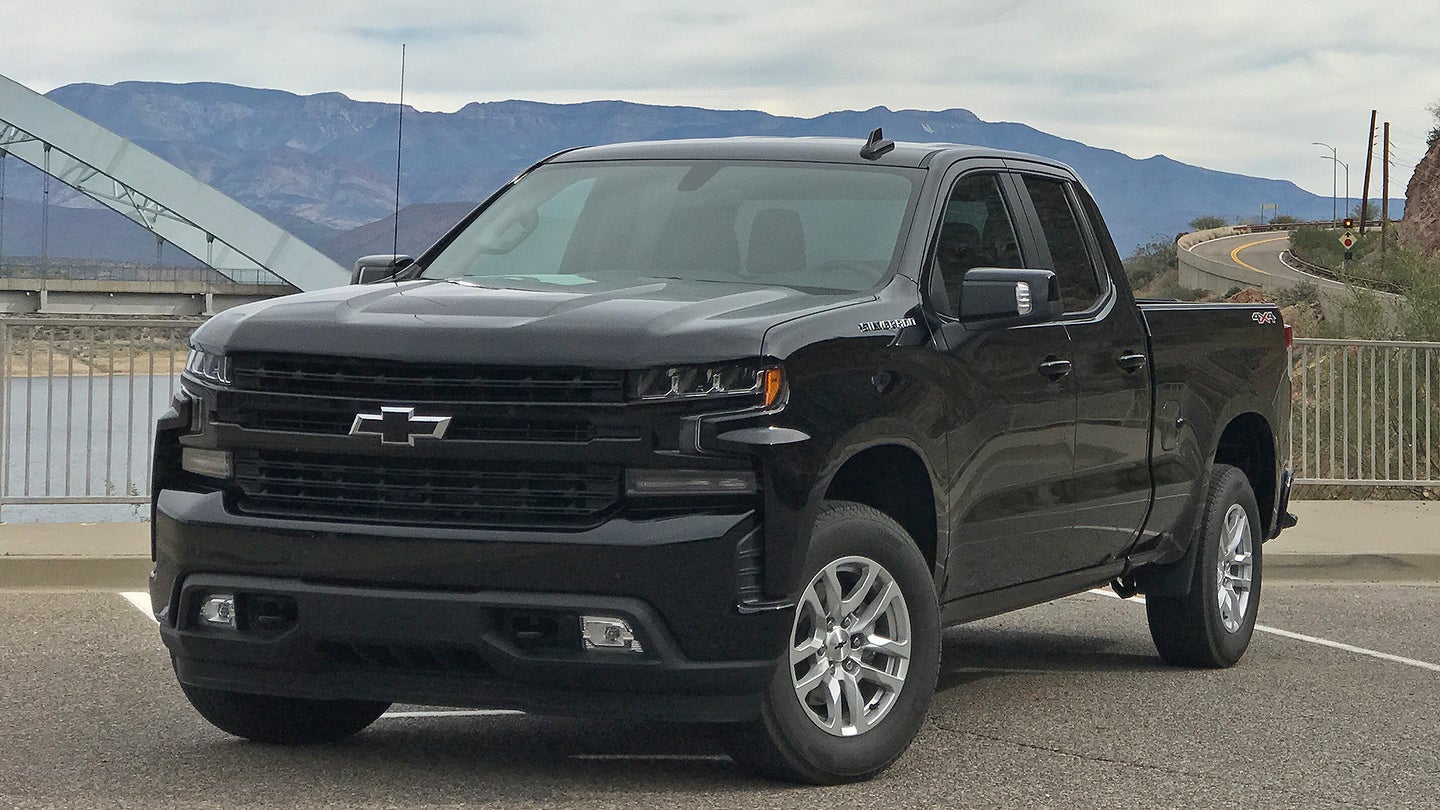 Considering Ford's recent efforts to go all-in on EcoBoost powertrains, the idea that America's first full-size pickup truck powered by a turbocharged inline four would come from Chevrolet might seem a little...counterintuitive. GM, after all, has been the traditionalist amongst the Big Three when it comes to the power beneath the high hoods of their pickups; while Ford has been pushing downsized turbo V6s and Ram has started slapping 48-volt mild hybrid systems to its venerable Pentastars and Hemis, the vast majority of Silverados and Sierras have soldiered on with smallblock V8s, just as their predecessors did for decades.

So when Chevrolet announced it was bringing an all-new 2.7-liter turbocharged inline-four to the new-for-2019 Silverado, it came as a bit of a shock. (Adding to the surprise was GM's decision to dust off the old "Tripower" name for the motor, which prompted a flurry of irritated hot takes in the media. Not surprisingly, Chevy seems to have dropped that moniker for it, as the company never once referred to it by that name during the two-day media drive in Arizona.) After all, base engines are generally the least-consequential powertrains in the pickup truck world, where power and torque reign every bit as supreme as they do in the land of sports cars and super sedans.

Then again, the new inline four—which GM full-size truck chief engineer Tim Herrick insists is called the "two-seven" internally, rather than use the cylinder count to distinguish it—isn't really the base engine for the 2019 Silverado. That "honor" still goes to the creaky 4.3-liter V6 that can still be found at the bottom of the lineup, nestled in the front of Work Truck and Custom trim vehicles as standard equipment. Compared with that motor, the 2.7-liter's 310 horsepower and 348 pound-feet of torque work out to 9 percent more ponies and 14 percent more "torques," as Jeremy Clarkson likes to say. More importantly for drivability purposes, all that torque shows up as early as 1500 rpm, versus 3,900 for the 4.3-liter naturally aspirated six.

Oddly enough, the new downsized and besnailed engine doesn't achieve appreciably better fuel economy than the bigger engines found further up the Silverado food chain—or even quite reach what the competition sees. In its most favorable configuration, the two-wheel-drive Silverado can squeeze 20 mpg city, 23 mpg highway from the engine, according to the EPA, but more common setups like four-wheel-drive models and crew cab versions will see 18 city / 21 highway. A 2WD Ram 1500 with the V6 can rack up 20 mpg city and 25 mpg highway, according to the feds, while a 2WD F-150 with the base 3.3-liter V6 gets 20 mpg city / 25 mpg highway. And the best Chevy's 5.3-liter V8 Silverado can do in 2WD form is 17 city / 24 highway, the EPA says, while 4WD 5.3s get between 15-16 mpg in town and 20-21 mpg on the open road.

That said, Herrick told Automotive News that the EPA ratings aren't worth the paper the Monroney is printed on: "Don't look at the label," he was quoted as saying. If that strikes you as a more eloquent automotive form of the "fake news" retort lobbed at unfavorable reportage regardless of how truthful it is, well, you're not far off-base—at least, not based on my time in the truck. Over the course of about 90 miles of mostly open-road driving at highway speeds through the Tonto National Forest northeast of Phoenix, the trip computer claimed my four-wheel-drive double-cab Silverado RST squeezed about 21 miles from every gallon of fuel it sucked down, right in line with the government estimates.

On the flip side, the inline-four didn't feel in any way like a compromised proposition. In spite of having to shove about 5,400 pounds of truck and adult men around, the engine felt more than capable, allowing the Silverado to easily accelerate up to legally-questionable passing speeds even on the short overtaking zones found going uphill in the small-yet-craggy mountains. And while it doesn't feel all that zestier than the naturally-aspirated V6s found in Rams and F-150s with the throttle hammered, the turbo's torque delivery makes it feel much peppier under the light-to-medium throttle inputs used by most people who aren't professional car reviewers, delivering a pleasant shove of thrust every time the gearbox dropped a cog and pushed the tachometer past 2,000 rpm. (Anyone who's driven the likes of Mazda's CX-9 will get the philosophy; turning a turbo for low-end torque over high-end power may not provide big advantages at the test track, but it certainly makes the car feel more lively to the average driver.)

We didn't have a chance to tow anything or load up the bed with half a ton of weight during our short introduction to the vehicle, but odds seem good the average buyers of trucks powered by this engine won't be doing too much of that anyway; Chevrolet expects the four-cylinder Silverado to largely cater towards buyers without a stake in the powertrain fight—for example, people new to the pickup truck world, migrating over from family sedans and crossovers. (Many of which, you'll note, are also powered by turbocharged inline-fours.)

The biggest complaints to be found were aesthetic ones: the four-cylinder under load exhibits an alto version of the usual direct-injection inline-four wheeze with a spritz of turbo whine for flavor, and the shifts delivered by the well-aged eight-speed automatic (the only transmission to be found paired to the 2.7T) could be harsh, especially under a heavy foot. Then again, aesthetic complaints are kind of the biggest pains in the new Silverado's side these days. The ride's truck-like stiffness may be appealing to traditionalists, but as The Drive's own Lawrence Ulrich pointed out, it seems painfully outdated when compared to the Ram's air-ride suspension. The interior is the mildest of evolutions when compared with the preceding model—again, leaving it looking half a decade behind the Ram 1500's clean, futuristic arrangement. And the exterior styling remains, shall we say, controversial, to say the least. Existing Silverado buyers may love it—and GM admits the truck was made with an eye towards retaining existing customers over trying to conquer Ram or Ford buyers—but to the eyes of objective observers, it's the sort of face that looks best without chrome highlights. In a dark color. At night. Under a new moon.

Ultimately, viewed as a long-term play, the new turbo four makes sense. It's far more future-proof than the old V6; if GM's past engines have proven anything, it's that the company excels at revamping and reinventing its existing powertrains for new eras and demands, so this brand new turbocharged four-cylinder will likely find use in one improved form after another for decades to come. And while GM hasn't announced any other plans for this dual overhead cam engine yet, I can't help but notice that its 2,727-cc displacement and single turbo would make exactly half of the DOHC 5.5-liter twin-turbo V8 reportedly planned for the mid-engined Corvette. Not sayin'...just sayin'.